You Got Served: Not all two-deep coverage is the same

Happy Wednesday, friends. I watched the film of the Kansas City game Tuesday night, and I was pretty surprised by what I saw in the All-22 view, because it went against the notion I had from watching the TV feed in real-time.

That is, I thought the Chiefs played a lot of single-high safety with an eighth man in the box to stop the run, and crowd short routes. You can't see the alignment of the safeties very well on the live view, and the outcome of the game (lots of deep passing by the Broncos, limited success running the ball) supported my thinking.

After all, the previous week, the Patriots stayed in two-deep all game, and contested every short route in front of it, trying to beat up the Broncos' receivers. That's how you get Knowshon Moreno running 37 times for 224 yards; the offense takes what the defense is giving it.

As it turns out, the Chiefs mostly tried to play two-deep as well; they just weren't quite as committed, or nearly as effective as the Patriots were. As it turns out, the enduring narrative that came out of the telecast of Sunday's game (poor Marcus Cooper!) missed something major as well.

Cooper is the easiest target from among the Chiefs' main corner trio (also including Sean Smith and Brandon Flowers), but he really isn't a slouch. He's good enough to prevent the formerly high-paid Dunta Robinson from seeing the field much this year. Until the last three weeks, Cooper had a positive 8.0 rating by PFF, and now he's at a cumulative negative-3.0.

As they sometimes do, I think that PFF is falling into the trap of imagining that things happen in a vacuum on the football field. It wasn't all Cooper's fault, not by a longshot. I want to look at three huge plays in Sunday's game, where I'm going to put the blame on poor safety play by the Chiefs. That's been their biggest problem the last three weeks, not the struggles of Cooper.

This is the pre-snap look of the first play of the second quarter. The Broncos trail 7-0, and face a 1st-and-10 at the Chiefs 41. Great time and place to try play action, right? Especially so when the tendency to run on 1st-and-10 has been so strong lately.

The Broncos show 12 personnel here, with both tight ends to the right, and only Moreno in the backfield. The two wideouts on the field (Demaryius Thomas and Eric Decker) are at the bottom of each set of numbers, with the corners showing press technique.

(Side note: I would have called illegal formation here, if I were the head linesman.  Notice how Decker's left foot is even with the 41 yard line?  He's pretty clearly covering up Virgil Green, whose hand is on the 42 yard line.  The Broncos are lucky not to have been called, and this is another example of Decker not always playing a strong mental game, despite being such a gritty, heady, blue-collar, lunchpail, (insert your favorite sports euphemism for "white"), kind of guy.)

The Chiefs show two deep safeties, but they're both way inside, especially Eric Berry, who is on the field-side hashmark. 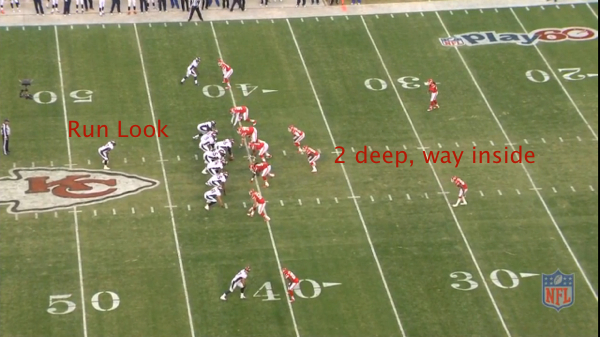 This is going to be play action, and Eric Decker gets a clean release against Flowers at the bottom of the picture. Flowers is Kansas City's best corner, and typically covers the slot when there is a slot receiver (That's actually the most difficult assignment most of the time).

Berry is squatting at the 30, and his eyes are in the backfield. He really wants to come up into the box and play run defense, because that's what he's best at. 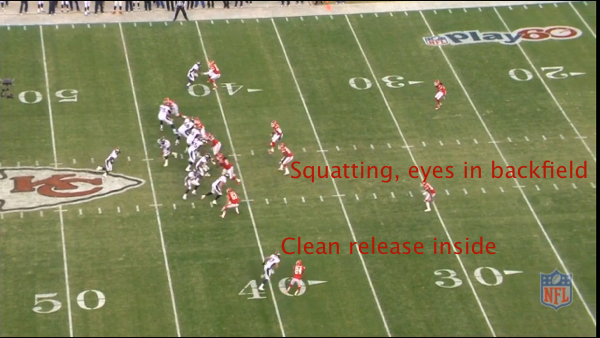 Berry sees that it's a pass, but he's focused on Joel Dreessen, who has just cleared the LB level at the 35. Throughout this game, the Chiefs linebackers seemed to be assigned to play zone in the hook and flat areas, while everybody else behind them played man or matchup zone.

Meanwhile, Decker has closed the cushion on Flowers, and he's even with him at the 30, but with a step to the inside. In a standard two-man call, Flowers has help, and judging from his outside leverage, I can only assume that was his understanding of the call. Nobody's there, though, and Decker is going to run away from Flowers to the inside. 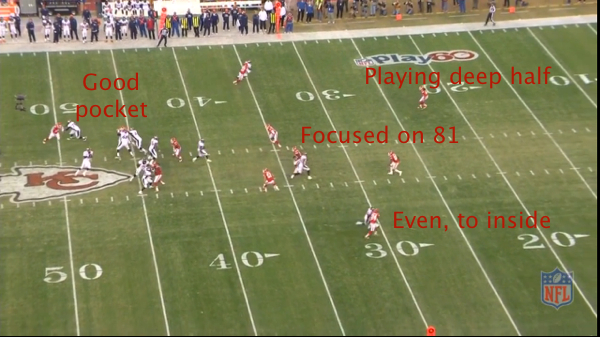 Berry follows Dreessen all the way over to the other side of the field, joining Kendrick Lewis, the other safety. Berry clearly busted on this play, because no sound defensive design would have Lewis playing a deep half (at best - maybe a deep third) with Berry assigned to bail on his deep help responsibility to follow a dude like Dreessen.

Flowers can't do anything, because he was beat when he lined up with outside leverage,and Decker is going to score easily thanks to a typically excellent throw from Manning. 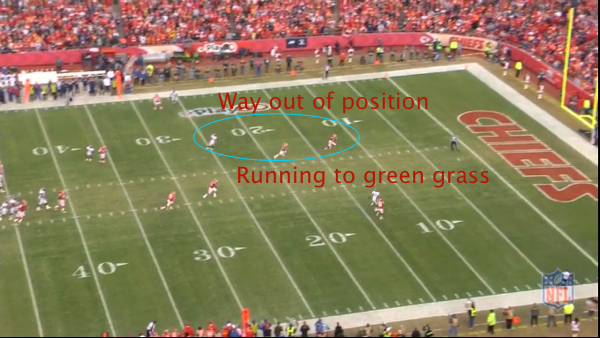 It's not just Berry who had problems. The narrative of Cooper getting abused really began when Demaryius Thomas got deep on him for a 77-yard gain in the third quarter. This is the pre-snap view of that play. Lewis is 23, and he's at the 14, looking inside all the way. Thomas is at the bottom of the numbers, and Cooper has slight outside leverage - again - like he's expecting help inside.

Lewis's depth is important here, because this is a half-assed two-deep look. Lewis is really splitting the difference, like he wants to play the box. Why? Beats the hell out of me. Seems like a bad judgment call; you have trips to his side, with Decker, Wes Welker, and Thomas, and it's the wide side of the field. Staying deep would seem to be in order. 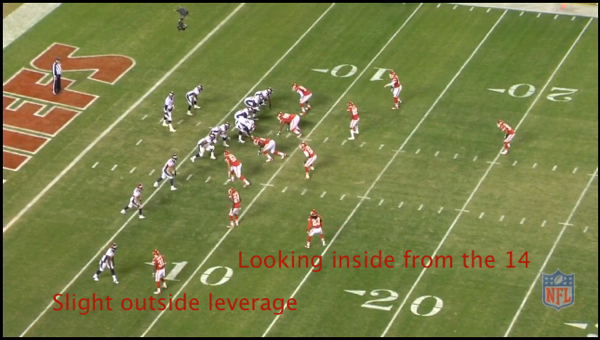 At the snap, Lewis does retreat to the 20, but his eyes are still way inside. Thomas gets a clean inside release with an outstanding outside-in fake, and this thing is going to be over before it starts. Manning has already spotted the weakness and is about to throw the ball in this shot: 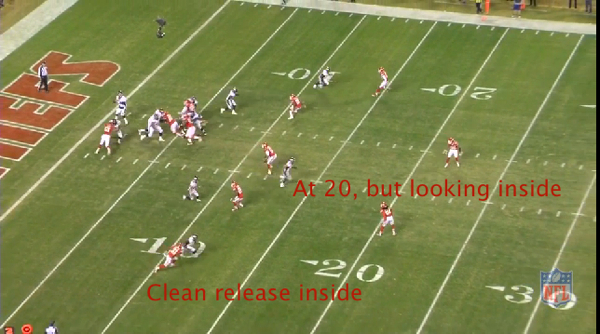 At the point of the throw, Lewis is flat-footed, worried about the out-breaking Decker. Thomas is going to make an easy catch, and go for the big gain before Cooper (somehow) catches him. Note the middle linebacker in no-man's land, with nobody near him. He almost certainly should have carried Decker down the seam, but he didn't. 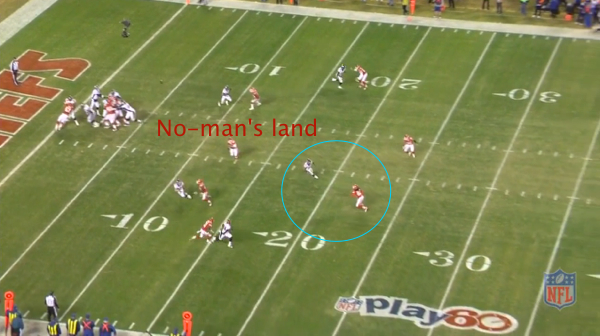 Cooper could have done a better job, sure, but where was his help? Lewis misdiagnosed the route combination, and got himself caught inside. That's poor safety play, worrying about a 10-yard out, as the outside guy runs a go route on you.

A couple of plays later, the Broncos pick on Lewis again. Here, the call is for a double-post to the 3-by-1 side. Decker is outside, Jacob Tamme is to his left, and Wes Welker is furthest inside. (It's a White-out on the right side.)

Flowers is number 24, and he has an interesting assignment. He's going to jam Tamme, release him, and pick up Welker man-to-man. Cooper is playing off of Decker, with outside leverage, so there's nobody impeding his free release to the inside. 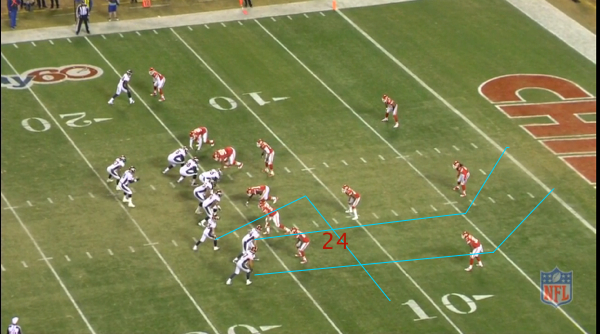 At the top of Manning's drop, he sees this touchdown very easily. Lewis is on the hash, clearly focusing on Tamme. This actually looks like quarter-quarter-half, like a form of Cover 6, but the way it's playing out, with the linebacker carrying Tamme down the seam, Lewis should be splitting the difference between him and Decker, helping on both. 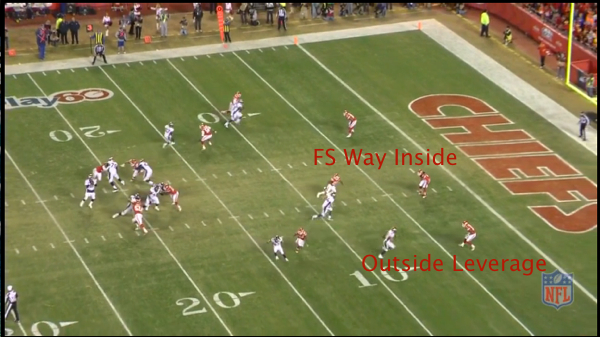 Predictably, Decker gets across Cooper's face easily, and Manning has a huge window for the throw.

This play gives the Broncos a lead they'd never relinquish, and once again, it is the result of the failure of a safety to give proper inside help. 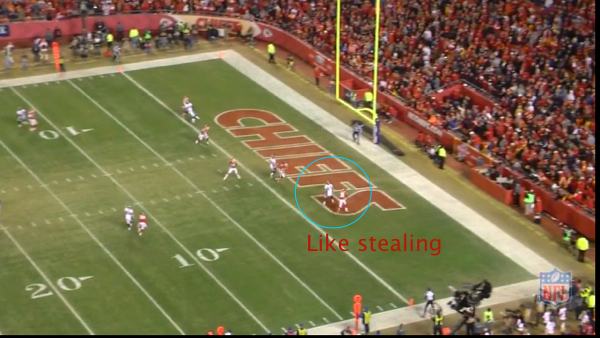 After seeing them twice in three weeks, I don't think the Chiefs' corners are bad, not at all; actually, I think it's their safeties. Berry is good as a box guy, and a nickel linebacker, and he has some skills covering tight ends man-to-man, but as a help guy, he really struggles. Lewis is pretty sorry, and Quintin Demps (who plays a lot) is replacement-level.

The two positions where KC needs to improve to really compete with the Broncos in the future are wide receiver, and a deep centerfielder safety.