When BREAKING NEWS isn’t that newsworthy (most of the time)

Good Morning, Broncos fans! Although they were heavy road favorites, Seattle (7-1) needed all 60 minutes of Monday night's game to dispatch of the Rams (3-5).

Thanks to a last-second goal-line stand, the Seahawks escaped St. Louis with an improbable 14-9 victory, in which they gained only seven first downs to the Rams' 23.

St. Louis also outgained Seattle by an eye-popping 339-135 advantage, but of course, turnovers (two for the Rams, none for the Seahawks) made up for those lopsided figures.

80 of the Seahawks' yards came on a third quarter touchdown pass to Golden Tate from Russell Wilson, who threw for 139 yards and two scores, but lost 48 yards on seven (!) sacks.

Seattle remains a game up on the surging Niners, while St. Louis sits in last place in the NFCW, a game behind Arizona.

Denver will take advantage of the bye week by having Peyton Manning, Julius Thomas, Orlando Franklin, Champ Bailey, Chris Kuper, and several other veterans take it easy during today's and tomorrow's practices.

Terrance Knighton says Wesley Woodyard's return to the field was a big factor for Denver's defense against Washington.

Sunday marked the first time in four weeks that no Broncos running back fumbled. Of course, Peyton threw three picks and lost a fumble, so there's that.

Von Miller pleaded guilty to minor traffic offenses under a plea agreement which says he must complete a driving class and perform some community service. Naturally, the Denver Post deemed it email-worthy "BREAKING NEWS" that Von was a bit late to his hearing (allegedly due to a misunderstanding between the court and Von's attorney). 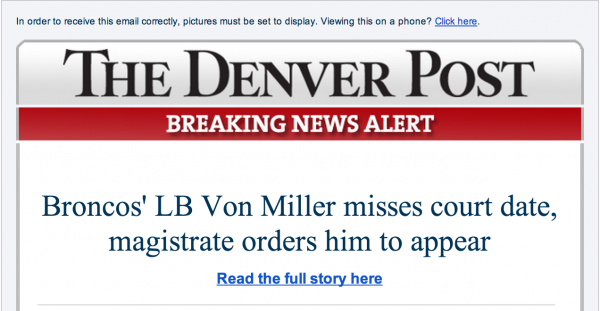 According to PFF's Steve Palazzolo, Jack Del Rio is moving Von Miller a lot more through two games than he did last year, while Peyton Manning was 0-6 on throws beyond 20 yards on Sunday.

Denver's secondary is already looking better now that Von Miller is back in the mix, and quite frankly, that should surprise nobody. Matt Williamson (ESPN Insider) saw the same.

Benjamin Hochman doesn't buy the notion that Denver should be scared of Kansas City, and neither do I. Really, Alex Smith is going to match throws and wits with Peyton Manning? I don't think so.

Joan Niesen saw during the second half of Sunday's game a level of confidence from the Broncos that had gone missing in recent weeks.

Jeff Legwold checks on the progress of Denver's rookies.

Greg Bedard thinks Jim Haslett screwed up in a big way when he called for a corner blitz on the Demaryius Thomas's 35-yard touchdown.

Washington safety and noted headhunter Brandon Meriweather says he plans to go after players' knees now instead of their noggins, and he thinks woman abusers like Brandon Marshall should be kicked out of the league.

Kubes is going with Case Keenum at QB over Matt Schaub when Houston hosts Indy on Monday. Now's as good a time as any to recall that John Clayton included Schaub among his so-called "Elite" group of quarterbacks. LOL.

Obviously, Raiders DC Jason Tarver was fined for flipping off the officials during Oakland's win over Pittsburgh.

Without having the slightest clue what he was saying, the football media reacted to animated sideline outbursts from Dallas wideout Dez Bryant in predictably presumptuous and hacktastic fashion.

New England RT Sebastian Vollmer underwent surgery to repair a broken leg and may be done for the year; Cincy LB Rey Maualuga will miss 3-4 weeks with a sprained MCL; RB Beanie Wells tore his Achilles during a tryout with Baltimore.

The NYT discusses NFLN's ten years of existence, including the fascinating tidbit that ESPN was thisclose to owning half of the network.

Pat Kirwan, Mike Silver, and Frank Schwab kept the Broncos at #4 in their power rankings, if you care.

According to DYAR, Peyton Manning was Week 8's seventh best quarterback, while Knowshon Moreno was second among backs.

Brian Burke continues his intriguing look at when/whether coaches should accept offensive penalties on plays where their defense caused a loss of yardage.