Happy Tuesday, friends.  Welcome to Part 6 of our seven-part series about how Peyton Manning plays offense.  Today, we’ll cover the seven-step passing and screen games.  Later this week, we’ll close out the series, and then it’s on to Draft coverage.

Here are links to the first five parts of the series if you need to catch up on something:

As I mentioned on Wednesday, the Manning offense tends to revolve around the three- and five-step passing games, particularly the five-step version.  The seven-step game takes a long time to work and requires better protection, generally with fewer receivers in the pattern.

Manning’s talent for recognizing open receivers quickly and getting the ball out on time, mixed with Indianapolis’s lack of emphasis on investing its resources in offensive line talent, tended to drive the orientation toward quicker plays with the Colts.  The Broncos have much better offensive line talent than the Colts ever did, even if some of the players are young and have significant room for improvement.  That fact lends itself to some seven-step concepts that employ double-moves in attacking deep downfield.

I don’t want to assume that everybody knows what I mean by the term “double-move”, so please allow me to quickly explain for those who may not.  Here is the standard route tree of a West Coast system, which I am using because I have a good diagram of it: 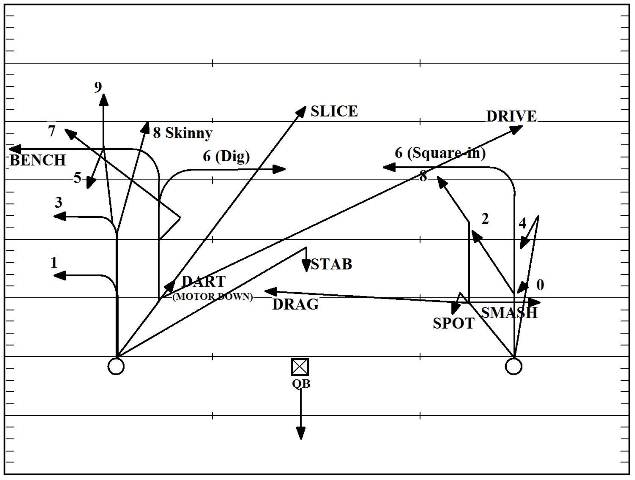 If you consider it to be cut into thirds from top to bottom, look at the intermediate routes.  We’re talking about Dig, Out, Bench, Curl, and Slant.  Those routes tend to work really well with three- and five-step passing concepts, and defenders will see the breaks and try to drive on the route in order to prevent the completion.  Safeties will also drive on the play if they see the QB looking at it.

With a double-move, the receiver is going to break to the Out or to the Slant, but then turn it back to a Go or other deep route, hopefully right after the CB and Safety drive on the shallower route.  The QB will often help by staring down the fake route and pump-faking to it.  You’d only run a double-move a couple times per game, but it’s the sort of thing that makes DBs hesitant to drive aggressively on shorter routes, or takes advantage of over-aggressiveness, both in aid of scoring Touchdowns.

These kind of plays tend not to be regularly used concepts, and are more often game-planned one-off designs.  Here are a couple of examples of double-move plays from a seven-step drop.  Remember that the offensive linemen are setting even deeper than they did in the five-step game, so as to provide enough time for the play to develop.  Also note that you’re going to tend to see six- and seven-man protections, and consequently, fewer players in protection.

This is the classic double-move that teams have been running for decades.  It’s a very simple design, as you see here: 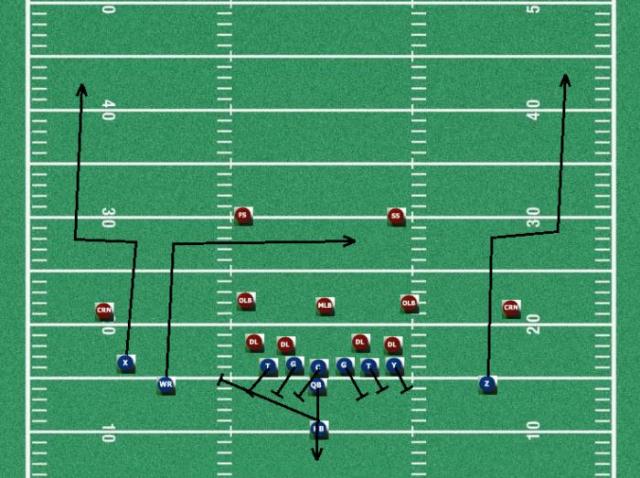 The outside receivers run hard speed outs, tricking the CBs into driving on their routes.  After three steps to the out, the receiver turns up the field and runs a Go route.  The slot WR or second TE runs a deep crosser to help occupy one of the safeties.  These routes will almost certainly be wide open if they’re set up properly by repeated success in the intermediate passing game.

The key element to a slow-developing play like this is protection.  Note that we’re keeping the RB and a TE in to help block, making this a full seven-man protection.  The extra manpower should result in a really clean pocket for Peyton Manning.

Post-Corner has been very common for the last 20 years or so – it is what it sounds like, a Post that’s cut back to the Corner route: 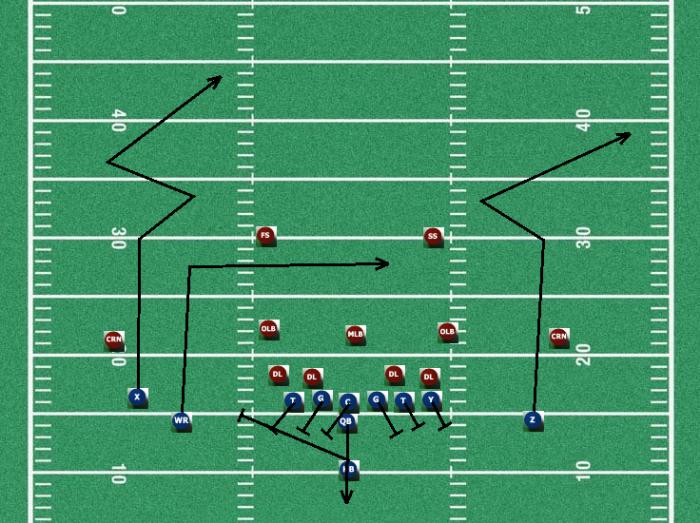 The Z receiver is running that route, and the X receiver is actually running a triple-move, which has come into some vogue in recent years.  That’s a Post-Corner-Post, and as you can imagine, it takes extra-extra time to develop.  You’d run it against a Safety who is disciplined to the first move but who tends to jump the double-move.  The Dig from the slot guy is there to help occupy Safeties, but it’s usually not used.  There’s no checkdown available, and the option if everything is covered is to throw the ball deep out of bounds.

Delayed screen passes work best off of deep QB drops and receiver routes.  They’re a key element of a vertical passing scheme, because they cause defenses to stretch from the line of scrimmage to the end zone.  That often leaves a ballcarrier with open field when he catches the ball short.  The defensive line is deep in the backfield, the coverage players are downfield, and the RB (or whoever) is in between them.

There are many flavors of screens, and it tends to be a game-planned element based on specific defenses.  I’m going to show three types of screens today.

I drew this with the same Post-Corner-Post action from the previous section, but you could have any combination of vertical routes going on downfield, and this play should work. 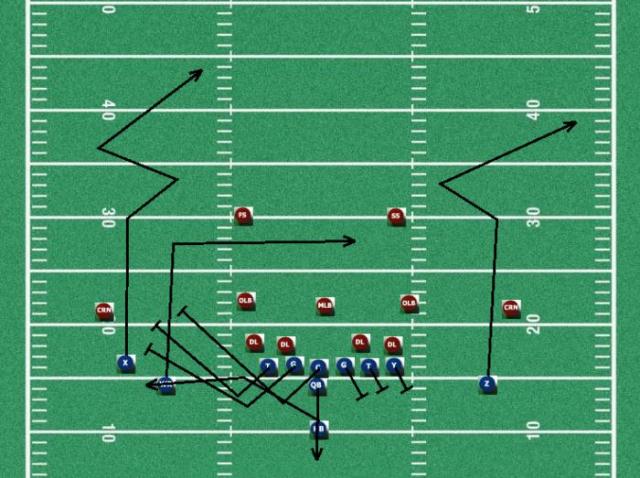 The big idea in any delayed screen is that you want the frontside offensive linemen to release their blocks on a timed count and let their rushers approach the QB.  They have to sell it as if the DL defeated them, though.  The QB needs to keep his eyes downfield and feel the rush, then drop the ball over the frontside rush, right on time, as the RB gets to his spot behind the three linemen who are heading downfield.

A huge key is the timing between the OL, RB, and QB.  If the throw or the route are late, a lineman is going to be illegally downfield.  The best screen teams execute this on time consistently, or the QB throws the ball into the ground behind the line of scrimmage if the play gets blown up.

This looks the same as the last play, and that’s the point.  The difference is that the operative receiver is the TE on the backside, and that no linemen are necessarily assigned to be out ahead of the play. 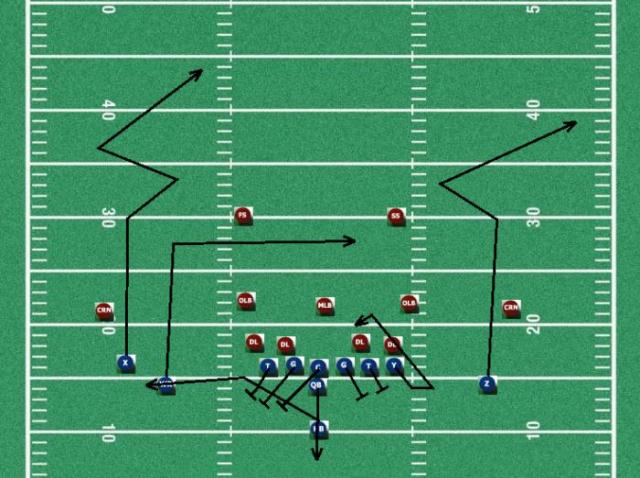 You’d run this variation when a defense is reading the frontside screen too well or too quickly.  Josh McDaniels was a big user of this concept, and the Broncos did it a lot with Daniel Graham.  Expect to see Aaron Hernandez killing teams with it this year.

This is a classic Manning play from the Shotgun.  There’s a quick play-fake to a Sweep Right, and then a throwback left to the X receiver: 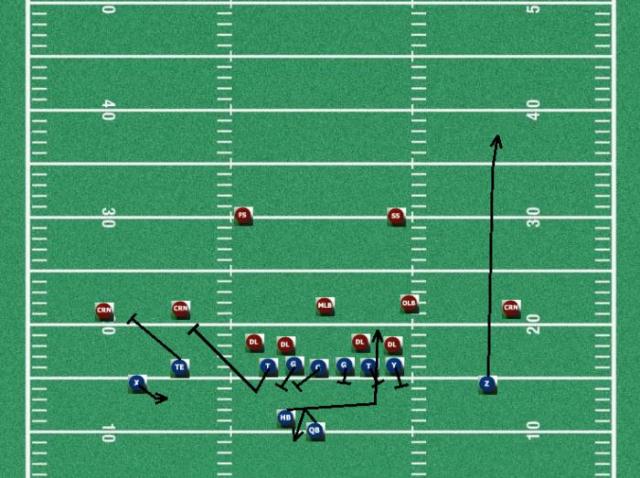 It’s helpful to have a mobile LT to make this work, and the Broncos have one of the most mobile ones in the NFL in Ryan Clady.  The X is going to have two blockers in front of him, but it’s best to use a shifty guy for a play like this.  Think Bubba Caldwell more than Eric Decker.  This play serves as a key misdirection element, and it helps the running game.  (See Part 3 for more detail.)

I don’t consider a Smoke play to be a true screen, but I figured it fit better here than in the core play action game, which I aim to cover Friday in Part 7.  I’m going to be in Dallas for a few days for meetings and mandatory fun, so hopefully, I'll have time to write between now and then.  Have a good few days, friends, and hopefully we see each other Friday.