Happy Wednesday, friends.  Today we get back in the saddle with the technical series about the offense that I expect to see the Broncos run this season.  Today, it’s Part 5, where we’ll discuss the five-step passing game.  If you’ve missed any of the first four installments of the series, please check them out at the following links:

The five-step passing game is the key element of any offense, because with a five-step drop, and its concomitant protection schemes, the QB can create the correct timing to threaten all levels of the defense.  When a WR is asked to run a Dig route at 18 yards, that’s an activity that takes around three seconds to execute.

When the QB’s drop is five steps, or five and a hitch, the offensive line drops to deeper sets, and there will usually be a bonus protection player.  The whole thing is coordinated together to provide the necessary timing.

We’re going to cover five basic five-step concepts that we’ll all get very used to seeing this season.  IAOFM readers will know what they’re looking at, and you can feel really good about that.  When you’re done gloating about how much smarter you are than the average reader of Broncos Site X (or Y or Z, for that matter), tell an uninitiated friend or ten to check us out.

Before we embark, I want to make a key point that will be repeatedly pertinent as we discuss the five- and seven-step drop games.  We need to understand that in football, there’s a major advantage to be gained on offense by making differing activities initially look the same.  That’s why teams always like to run their play-action games off of run action that they actually use – it helps to set up the success of the actual play.

When we use the term Vertical Stem, what we mean is that the receiver takes off vertically in the same manner on almost every route, and that some kind of break happens at a key point in the vertical release, usually 12 yards.  (That can be extended either by design or by adjustment.)  Look at this diagram that I put together: 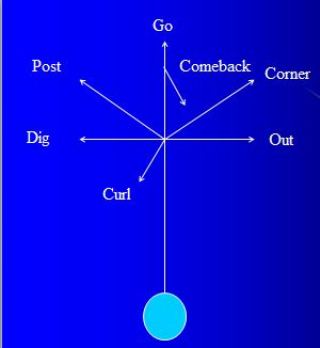 The Curl, Out, Dig, Post, and Corner all break at exactly the same point.  The Go obviously keeps going straight, and the out-breaking Comeback is a deeper alternate route off of the Go.  These are the seven key routes of the vertical passing game, and they all come from the same initial 12-yard vertical burst by the receiver.

What’s happening on the field is that the receiver is running straight at a CB who is often playing off, and eating up the 8-10 yard cushion quickly.  He gets the CB to turn and run right at the break point, and then heads into the real route.  The receiver practices this constantly, up to knowing exactly how many steps it takes him to get to 12 yards, so as not to tip the ultimate route being run.  A good CB studies film to look for hints, and then plays those hints.

You’ll see repeatedly in the following diagrams how almost everything works off of the same vertical stem.  This helps receivers get open against any kind of coverage, because the receiver knows where he’s going, and the defender shouldn’t be able to tell.

Every offense runs a smash concept of some type, and it’s one of the most basic man-to-man beaters.  You’ll see it sometimes at the goal-line, with much quicker route action and a shorter QB drop, but the basic play is more of a downfield concept: 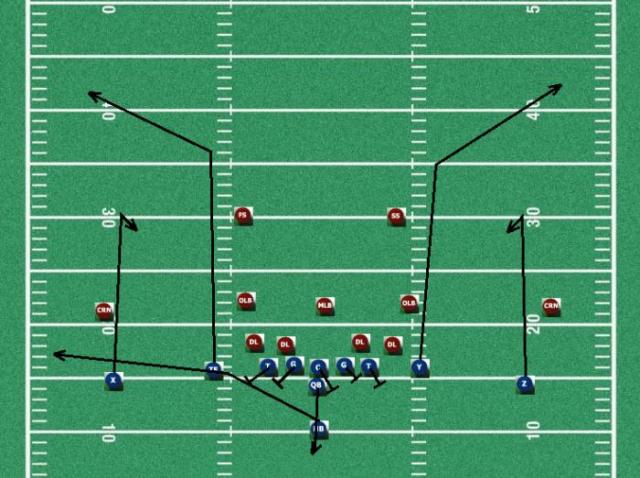 In terms of protection, the RB is tasked with check-releasing, so this is what we’d call a 5.5-man protection.  Even as the RB gets into his route, he’s part of the protection scheme, because he provides a quick outlet to the QB.

Flat-7 is one of the most classic Cover-2 beaters, because it exploits the primary vulnerability of that defense, which is the outside of the field.  Cover-2 lovers astutely realize that the most difficult throw for any QB to make is to the deep outside, especially across his body.  For a guy like Peyton Manning, though, it’s a piece of cake.  Manning has never had an elite arm, but he’s always had beyond-elite anticipation skills and accuracy. 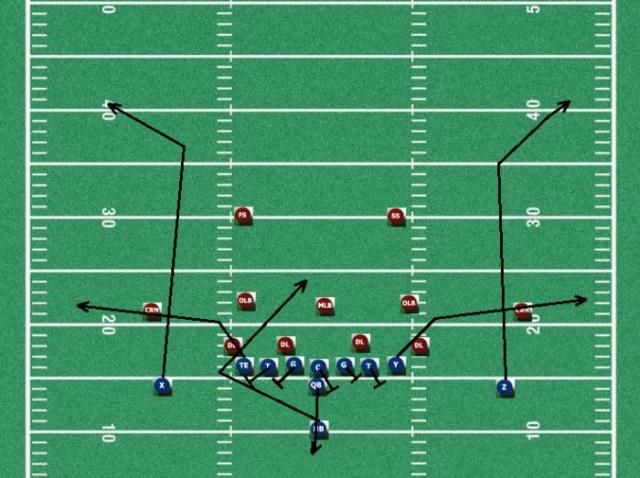 The outside receiver on both sides is running a Corner route (AKA a 7 route in numbered systems), and the inside guys are running to the Flat.  That action is designed to keep the Cover-2 CB shallow, and to discourage him from sinking with the WR.  That WR is going to have a huge advantage going outside against the Safety, and it portends for a big gain.  Note that the formation is tight, with the WRs both inside the numbers.  That’s not strictly necessary, but it’s helpful to this play design.

On the protection front, we’re seeing more of the same, with a 5.5-man protection and the RB check-releasing into a short route.  In this case, his route is in-breaking, because the Flat is already occupied.  The Angle route keeps the OLB and MLB occupied, and if they don’t stay with the RB, or they blitz, it’s easy to get the ball to him heading upfield.

This is another classic concept, and it’s unique, because it challenges Cover-2 and Cover-1 Man Under equally well.  The four receivers are running vertical routes, typically just Go routes.  It looks like this: 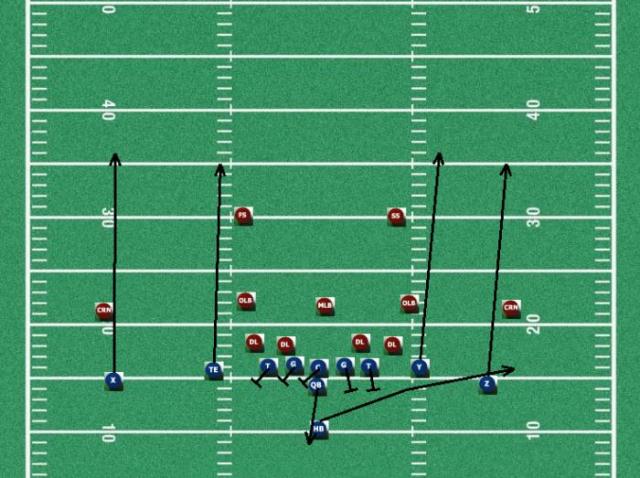 If you get Cover-2, the two deep cover men could be asked to defend four downfield receivers if the underneath defenders don’t read the action quickly enough, and sink with the All-Go concept.  If they do, there’s a profit to be taken short with the check-releasing RB in the flat.

I think this is a good time to note that any general concept can be modified through the use of what’s called a Tag.  This 4 Verticals concept could easily be amended to having two comebacks, or even four comebacks.  It could be amended to send the inside receivers to the post.  Offenses will tend to have code words to make these small adjustments, which will be used based on what the defense shows.  If the call is 4 Verticals, and Peyton Manning gets to the line of scrimmage and sees off-man coverage with inside leverage, he may holler Charlie! (or something to that effect) to switch the outside receivers’ routes to out-breaking comebacks.  By doing this, the same play isn’t always the same play.

Every concept I’ve drawn thus far has been mirrored, which means the action is the same to both the left and right sides of the field.  That’s very typical of the West Coast offense, and it’s seen in Erhardt-Perkins a good deal too.  Now, we’re moving into a couple of un-mirrored looks which are more reminiscent of Air Coryell.

Many passing concepts seek to create what’s called an Oblique Stretch.  That ends up looking like a triangle which forces zone defenders to leave at least one of the three receivers in the concept open.  If a defense rolls the coverage to the concept, it leaves the backside guy as an advantage player against minimal coverage.  (The Titans love to go to Kenny Britt away from the concept, for example.) 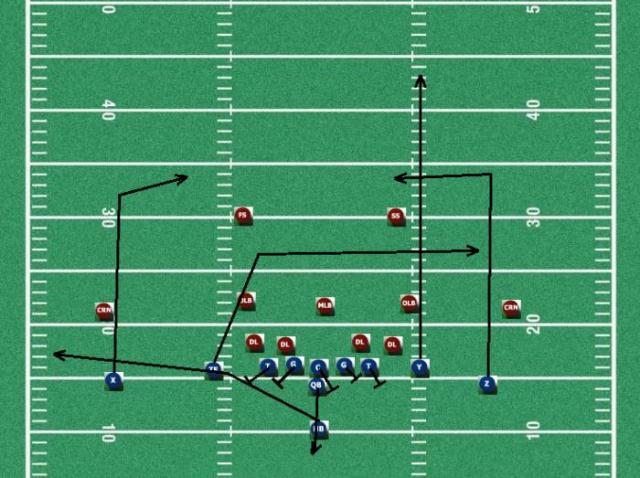 This concept creates a triangle on the right side, and it’s primarily designed to stretch a zone.  The frontside TE runs a vertical route, which is designed to force the SS to drop deep.  The backside TE runs a crossing route at 12 yards, which should limit the ability of the LBs and frontside CB to sink as he runs through their zones.  The Z WR runs an 18-yard Dig into the void that should be left between the deep-dropping SS and the shallow second level of the defense.

If the defense plays man-to-man, the advantage player is the backside TE, who is going to be difficult to cover through all the second-level traffic he’s going to be running through.  This play also features a check-releasing RB to the left flat, which should be WIDE open.

Here is the final concept we’re going to look at today – another Oblique Stretch concept that I call Out-Post.  It starts off looking like double posts, because the frontside TE is going to take a step to the post, and then break back outside. 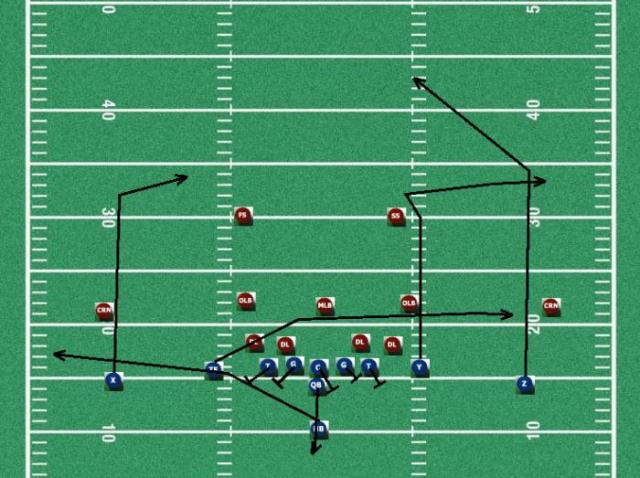 The Z WR does run his deep post, and again, we’re messing with the SS here.  With the shallow crosser from the backside TE/WR, the CB has to stay at home, so we’re forcing the SS to choose between covering the Post or the Deep Out.  The Chargers run this kind of action all the time, and it’s gotten Antonio Gates a ton of downfield catches.

If the defense defends this correctly, which is to say that they roll the coverage to the offense’s right, and the FS takes the Post, and the SS takes the Out, we have an advantage player in the backside X WR, who would then be one on one against the backside CB, with no Safety help.

You’re no doubt beginning to notice that I like 5.5-man protections better than six in the five-step game, especially when Peyton Manning is the QB.  The RB again check-releases to the left flat here.

Think for a moment of how far we’ve come in hitting the major points of a complete offense.  We have a running game, a three-step passing game, and a five-step passing game.  Next time, we’ll deal with the seven-step and screen games in Part 6, and following that, we’ll finish with play-action in Part 7.  Then, maybe I’ll start to talk about the Draft.  Have a nice week, friends.