Happy Tuesday, friends, and welcome to Part 4 of the ongoing series about the Peyton Manning offense.  Today we’ll take our first step into the passing game, beginning with the key concepts that make up the three-step game.  If you’ve missed any of the prior installments of the series, please feel free to catch up by following the appropriate links:

Every team runs some key three-step passing plays, which accomplish the goal of getting the ball in the hands of players in space by way of high-percentage completions.  With an excellent QB like Peyton Manning, the three-step game is especially effective, because he’s so quick at identifying the best receiver to throw the ball to and then put it on the guy’s upfield shoulder, which allows him to immediately begin running after securing the catch.

For a refresher on how offenses coordinate the length and timing of drops, routes, and protections, you should check out this article I wrote last August, in which I pissed off a bunch of Tebow nutjobs.  (Remember them?)

We’re going to focus on three basic concepts today and get ourselves a good start on having a feel for the passing game.  Do you remember from a year ago when I wrote about play nomenclature and included route trees?  The Manning offense isn’t one that is a tree-based offense, like the West Coast system is; rather, it’s a concept based offense, similar to Erhardt-Perkins and Air Coryell.

The term concept refers to a pattern of routes that work together to stretch a defense.  The benefit of using concepts is that every receiver knows what they’re supposed to do, and it tends to be muscle memory.  With a tree-based scheme, you can make up and communicate thousands of different route combinations in the middle of a game, but nobody really needs to do that, so it’s basically wasted capacity.

Let’s begin talking about the basic concepts that we’ll see often in the Broncos passing game:

The Slant is a staple route in most NFL offenses.  The receiver takes an outside release if available (it’s not mandatory in this case) and runs to an eight-yard vertical stem, and then crosses the face of his defender to the inside, running a diagonal route. 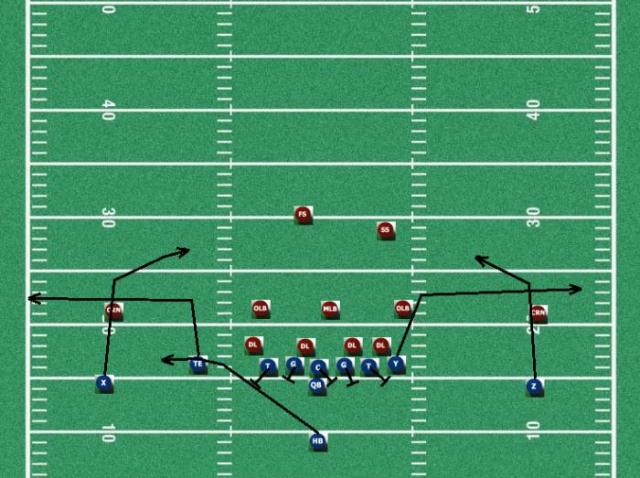 The Broncos will use a ton of 2-by-2 looks, as I’ve been saying, and on this concept, there’s a mirroring action, where both inside receivers run speed outs and both outside receivers run Slants.  The RB has chipping responsibility on the outside pass rusher to the wide side of the field and then runs to the flat to be the checkdown option.

Notice the wide splits by the outside WRs, who each align on the numbers.  The TEs are tight to the line, with one slightly flexed, and if there were a slot WR rather than a second TE, he’d also be aligned tight to the formation.  This is creating an in-and-out action, which is equally problematic for man and zone defenses.

The key read on this for the QB is what the safeties do.  If they’re backpedaling at all, the slant is going to be there if the throw is well-timed.  If either safety is playing forward into the slant area, then the QB can’t make that throw.  Instead, he has to take the speed out by the inside receiver, which really should be available, if the defense is playing base.  If you have zone coverage and the CB sinks deep on the speed out, the checkdown to the RB is in play.

This is a concept that is rooted in the West Coast offense, and it’s another one that just about every team uses some variation of.  Again, we see a 2-by-2 look, with the left TE slightly flexed, and the right TE (Y) tight to the line.  This is a man-to-man-beating concept, and it’s designed to create traffic and rubbing in the middle of the field. 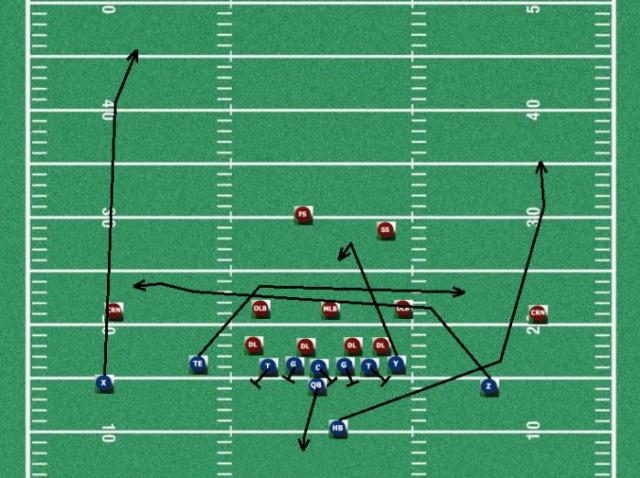 Every receiver except for the X is in this progression.  The X is running his vertical route to pull the FS out of the middle of the field.  The key action is the twin Drag routes being run by the Z and the left TE.  The expectation, given man-to-man, is that the ROLB will try to follow the Left TE, and that the LCB will try to cover the Z.  It’s really difficult to follow a guy across the field when he’s running away from you, and a good QB can hit the guy in stride when he has a step, letting him turn upfield for RAC yards.

Secondarily, there are two other interesting options at play here.  The Y is assigned to chip the LDE and then run a hook behind the two crossers.  The Steelers use this action a lot from bunch looks, and the hook man is actually where they like to go with the ball.  We also have the RB running a wheel route, which is designed to get a LB to follow him out of the middle of the field, and hopefully, the SS too.

Against Man coverage, this has a lot of excellent options.  Against zone, it’s even got a few that will move the chains.  If Manning diagnoses zone, he’d probably get out of this play, but even if he were wrong, the Broncos would be okay.

This is the primary zone-beater of the three-step game.  It’s actually only loosely three steps, because it’s what we call three and a hitch.  That means that the QB gets to his third step, looks hard to the seam, and then waits a beat, before throwing the ball.  This is done because the hooks by the outside WRs are off of a 12-yard vertical stem, as in the five- and seven-step game. 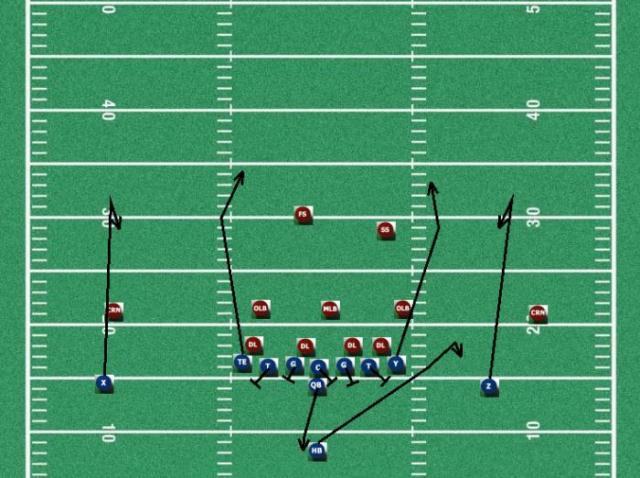 The TEs are running seam routes and forcing the OLBs to sink deep in their zones, and forcing the Safeties, who are reading four verticals off the releases of the receivers, to drop deep between the numbers and the hashmarks.

The WRs are taking an inside release (which a zone defense is happy to give up) and running hard in their vertical stem, before coming back sharply to nine yards’ depth.  Even if the CB sinks with the WR, if the guy can stay inside of him, this should be a fairly easy pitch and catch.  In this diagram, on the right side, the RB is running to the flat, and that should occupy the CB a bit, opening up the throwing window for the Z WR.  If the RB doesn’t get picked up, you take some yards with him.

A Note about Protection

In the three-step game, especially when the throw side is clear, like the right side in Stick, as we just diagrammed, the playside OT is often asked to cut his man to clear the passing lane.  It’s dangerous to have a DE read three steps from the drop of the QB and the OT, stop rushing, and get his hands up.  More and more, pass rushers are coached to do that, and it’s resulted in more interceptions lately.

That’s all I have for today, friends.  Check back Fridayish, to get into some five-step concepts.  Of course, if you’re a smart Broncos fan, you’re probably reading IAOFM every day, so there’s no need for me to even tell you to look for it.  Have a good week.