Happy Tuesday, friends, and welcome back to Fat Camp.  Today, as part of the ongoing series covering the Manning offense, I’ve decided to do some work on identification concepts that Peyton will use in diagnosing the defense and getting the Broncos into the right play.  Most of this stuff is standard across all teams, and all offenses, but it’s so important to what we’ll see from the Broncos that it deserves a couple thousand words and prominent placement on a football Tuesday.

If you missed Part 1 from Saturday, here’s the link:

Have you ever watched a football game and wondered what the QB is doing at the line of scrimmage?  He says some stuff and looks at things, and then the play happens.  Today, I aim to demonstrate, through the liberal use of diagrams, what Mr. Manning will be looking at, and what it means he will/should set the play as.  Exciting, huh?  (Yes, I just used the word liberal – I wonder if I’ll be accused of making this a political pontification?  Probably.)

The first thing we’re going to look at is the alignment of the defensive front.  That’s simple, right?  It’s either a 4-3 or a 3-4.  It’s only that simple if you’re the sort of person who likes to make complicated things simple.  It’s okay if you are, I suppose – there are a lot of football commentators out there serving up the Cliff’s Notes version (many because that’s all they know.)

Not me – My assumption is that I don’t need to dumb it down for anybody.  Okay, let’s start with some basic pregame front questions, which I will now organize with numbers which are correctly ordered, since I don’t write for SI.com, and my editor (Doug) doesn’t drink rubbing alcohol.

Let’s put the Chiefs through this exercise real quick, and answer those questions:

So, from watching Kansas City film, and reading internal reports, Manning will go into the game knowing that stuff about the general tendencies of the Chiefs.  That preparation will allow him to take a shortcut to looking at specific factors vis-à-vis the defensive front.

Pre-snap, the first question is, Does the front look like what I’d expect?  The next thing is to get two box counts.  Do you know how TV guys are always talking about “Eight in the box?”  There are actually two boxes – the Guard box, and the Tackle box. 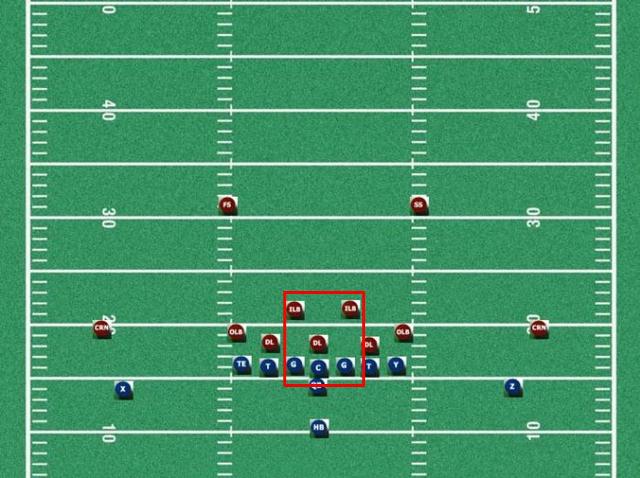 Here, we see three offensive linemen against three defenders (NT, ILB, ILB).  This is what we’d expect against the Chiefs, and we’d consider this to be neutral for an inside run, in terms of a count advantage. 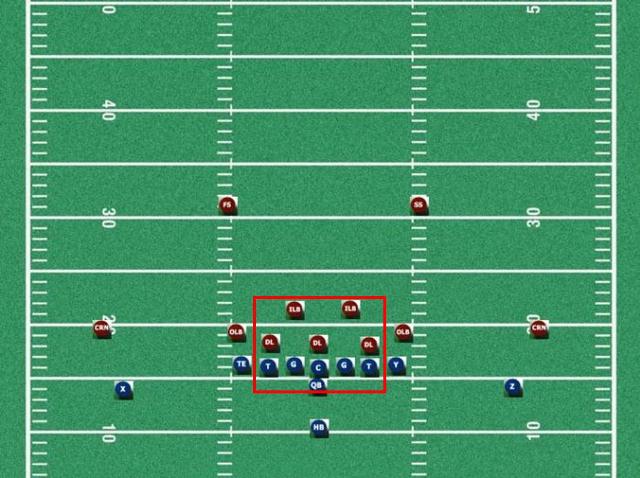 Our count here is five-on-five.  Against the Chiefs, and most 3-4 teams, this is as expected, because they want to be able to quickly plug every inside gap.  This is also neutral for a run.  The Broncos should feel pretty good about running the ball from C gap to C gap.  (The edges actually look even better.)  It will all come down to one-on-one matchups, and the offense typically likes that, because the need to read slows the defense down.

Regardless of what was called in the huddle, the run game is a pretty good option.  There are ways to make it an even better option though.  What happens if we flex those TEs?  Do the OLBs go all the way out on them, or do they stay inside in their normal alignment?  Maybe they try to split the difference, as pictured here: 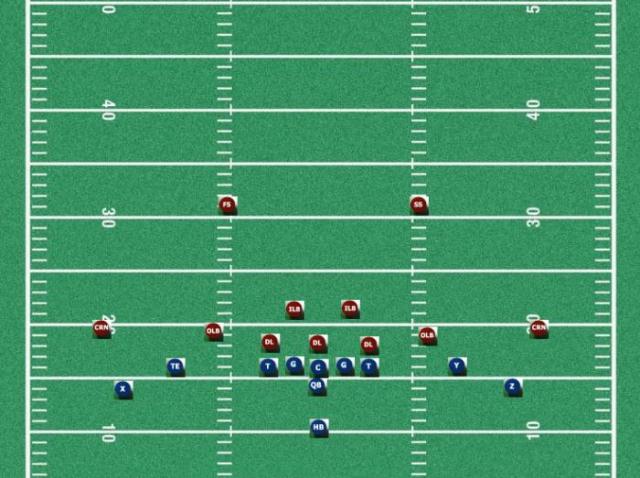 If Manning sees a LB (who can’t cover Jacob Tamme or Joel Dreessen anyway) splitting the difference, it’s a tremendously easy call to send them on an out-breaking route, with the outside WRs pressing the CBs deep on vertical routes: 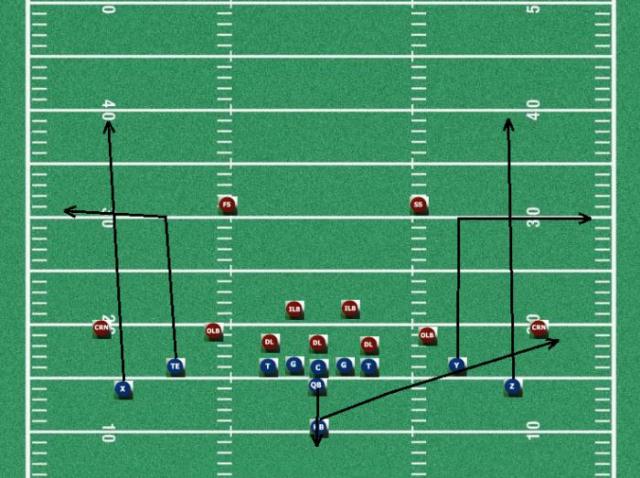 That’s like stealing.  Even if the defense is in Cover-2, there are adjustments the receivers can make - to something like Flat-7 - and Manning knows the RB will be open in the right flat.

Whatever those OLBs do, a great option is created.  This is why Tamme and Dreessen are worth every bit of $5.5 million of Average Annual Value between them, because they’re going to put defenses in really tough spots.  There will be defenses that don’t even want to play base against the Broncos, and that will open up the run even more.  Does switching out Dreessen for Andre Caldwell take the defense from Base to Nickel, or Nickel to Dime?  Extra CBs are a running game’s best friend, because any RB worth a damn isn’t going down one-on-one very often against a CB.

What if we’re looking at a team that likes to overload a lot?  That’s really dangerous against Manning, because he’ll spot it and just call a run to the other side.  This is the kind of look the Jets will give you: 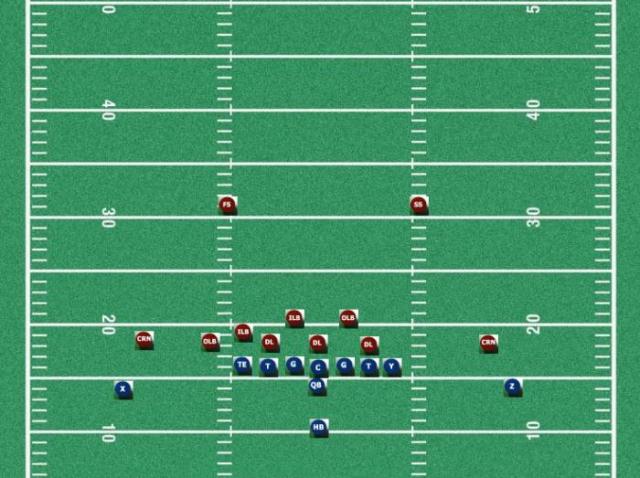 This is an easy call, just run a quick-hitting outside zone run to the right against it, because you see that you have four blockers on three defenders.  This should be a 10-plus-yard run, longer if the TE can get a good block on the SS downfield: 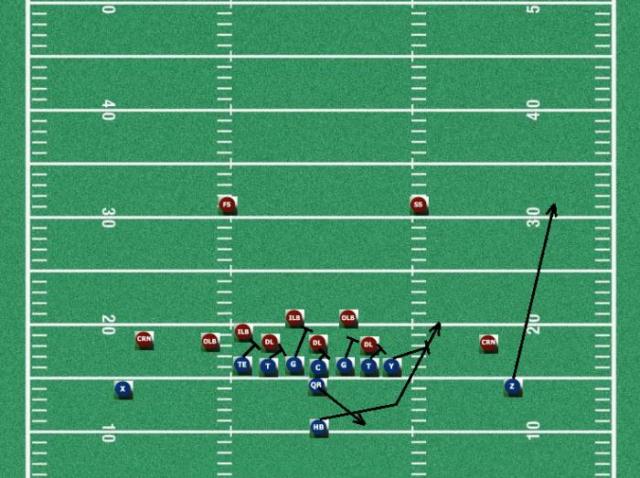 What if the defense is crazy enough to send an eighth guy into the box?  Well, for a Peyton Manning offense, that’s an automatic pass, preferably right into the spot where the extra box guy would normally be.

Reading the back end

A cool thing about having been a writer of technical football information for about four years is that I have an archive I can leverage for future articles.  Through the magic of The Google, I can type “Ted Bartlett defensive back alignment” and voila, my article from July comes right up.  I recommend you give it a quick review before reading the rest of this section.

Okay, welcome back.  Don’t you feel smart now?  Let’s focus on the leverage of the Cornerbacks first, because that’s going to be the best indication of whether the coverage is man-to-man or zone.  Guys outside will tend to play with either inside leverage or outside leverage.  This is what inside leverage looks like: 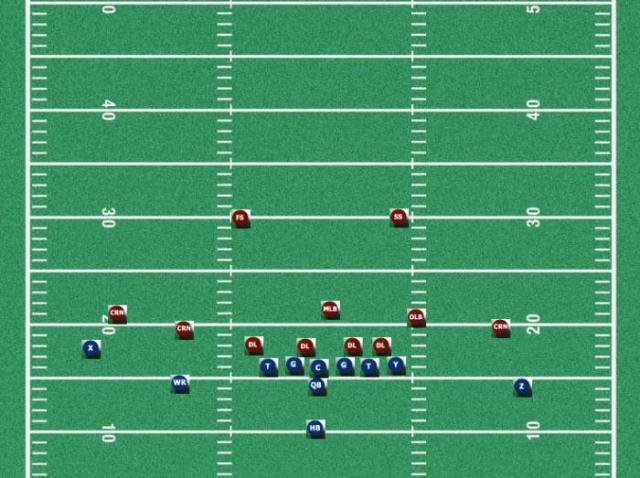 Inside leverage on the outside receivers strongly indicates man-to-man coverage, because those Cornerbacks are relying on the sideline to help cover their receiver.  The idea is to give the receiver an outside release only, and often, to bump the guy in that direction, and then to play a trail technique, with the expectation that they’ll have safety help over the top on deep routes.

The really vulnerable defender is the nickelback covering the slot receiver, because the receiver has a two-way go.  Peyton Manning has taken advantage of that fact against many nickelbacks playing man over the years.  He’s got such great recognition skills that he can look at that nickelback, who is usually playing with even leverage, and tell from his body posture what direction that guy’s first step is going to be.  When he’s on the same page with his slot receiver (think Brandon Stokley), that defender has no chance.  The same is even more true of OLBs who are assigned to cover TEs man-to-man.

If the CBs are showing outside leverage, as below, that indicates zone coverage: 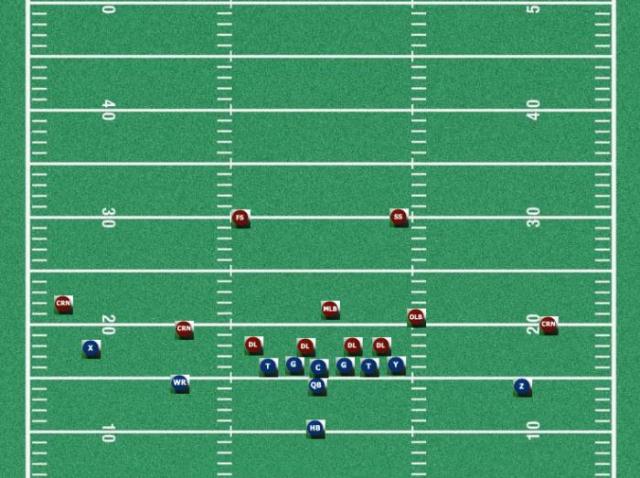 The idea behind playing outside leverage is that the CBs are giving up an inside release and funneling the outside receivers inside to the other help defenders in the zone scheme.  Against Cover-2, the vulnerable spot is the deep outside, which is why the most crucial skill for a CB in Cover-2 is to consistently get a good jam and re-route the receiver to the inside.

By knowing up front whether the coverage will be man or zone, Manning can get the Broncos into a specific pass concept that’s designed to beat the coverage that they’re going to see.  That’s a pretty powerful advantage, and it’s a key way in which Manning’s Colts teams have scored so many points and achieved so many first downs over the years

We haven’t even mentioned the Safeties yet, and that’s actually the first thing that any QB looks at, because it goes to box count and identifying the pass rush, as well as helping to indicate the coverage.  You can refer to either of the last two diagrams to see what two-deep safeties looks like (basically like the name sounds).

When a QB sees two-deep, it tells him that he has a seven-man box (at most).  That makes him want to run the ball, down and distance permitting.  Eventually, with success in the running game, the defense is going to feel like they have to bring that eighth man up into the box, and when they do, Manning is going to kill them with play action.

A lot of times, you’ll see one safety deep, cheating toward the middle, and the other one halfway between the deep part of the field and the line of scrimmage, like so: 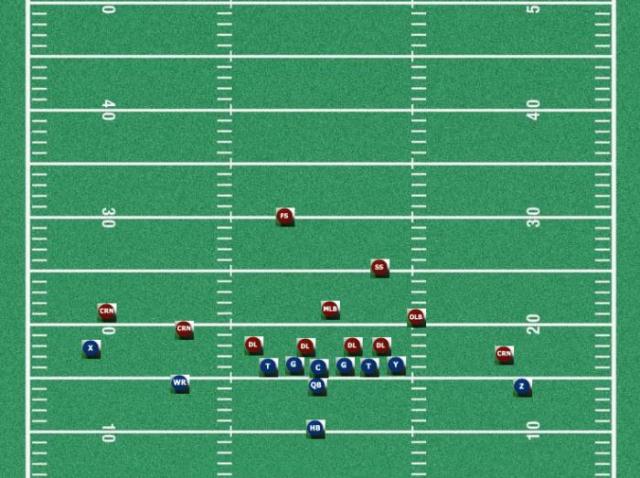 We can expect to see this a good bit.  A really good SS (like Troy Polamalu) can get back into a deep half from this halfway alignment, but average ones can’t.   Against most teams, the SS is going to be in man-to-man on the TE to his side, and the FS is going to be single-high.  That tells Manning that vertical concepts are good bets against this alignment.  He’s not going there every play, but he knows it’s there when he wants it.

Defenses really try to sugar their looks and move around presnap against Manning, but he always seems to be able to diagnose it and get the offense into the right play.  That skill is what sets him apart from other good throwers of the football, and it’s why you pay him whatever he wants to be paid.

I’m shooting to have Part 3 up for Friday, but this looks like a pretty hellacious week of financial close, and it may or may not happen.   When I get there, Part 3 will get heavily into the running game we can expect to see it.  Have a nice week.