Hello, friends.  I know it’s been a little while, but I’ve been super-busy with work and other pursuits the last couple weeks.  Today, let's explore what the Broncos offense might look like this season with the addition of Peyton Manning.  Since it’s a really simple scheme, I think we can pretty easily have a really good sense of what to expect once the regular season arrives.

Since we’re the only Broncos site which possesses the capability of getting deep into the X’s and O’s, we’ll be the ones to lead the way in educating Broncos fans on what to expect.  Let’s get going shall we?  Ready…. BEGIN!!

Let me first start by saying that as much of a fan as I am of Tim Tebow, I'm relieved and glad that he's gone.  The price of having him is just too high, with all of his yahoo bandwagon fans acting as a totally pious menace to intelligent society.  It will be interesting to see whether they drown out New York, or whether New York drowns them out.  Picking the Big Apple to win seems obvious, but you never know, and it will be interesting to see.  When people are determined to believe what they want to believe, it does little good to apply standards of reason to it.

I'm rooting for Tim Tebow the Quarterback to succeed, steal Mark Sanchez's job and women, and maintain his relationship with the homie Jesus, if that's what he wants to do.  Thanks for being a good Bronco, Tim, and good luck in Jersey.  Hopefully your fans don't ruin your career by making you somebody that no team would want to sign.  They're off to a pretty good start, unfortunately. 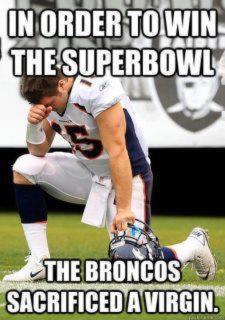 I can't wait for the email that tells that me some clown I don't care about put me on blast in an MHR FanShot for posting this picture and thereby offending their delicate little feelings.  You know what?  Rather than do that, read this Bill Maher op-ed, and then go do un-Christian things to yourself until it hurts.  Have a nice day

Broncos Offensive Coordinator Mike McCoy has come up running variations on the Erhardt-Perkins philosophy of offense for both Carolina and Denver, but he obviously tweaked his approach in 2011 to best fit the talents (as well as deficiencies) of Tim Tebow.  With Tebow now gone to eventually replace Mark Sanchez, and Peyton Manning the new man in Denver, McCoy will be very busy changing again.

Manning said at his introductory presser that he wasn’t going to be the offensive coordinator.  That’s literally true, in the sense that he won’t have that title.  He almost certainly will be leading the installation of his own offense, though.  John Fox said on Sirius the other day that he expects there to be a collaboration process between what Manning and McCoy like.  Translation: Manning's offense will be used.

Manning’s offense is the simplest in the NFL, which has the benefit of making it 100% callable from the line of scrimmage, and with every play available.  For all the talk about audibling, most teams in the NFL primarily use a check-with-me system.  That means that there will be a call made in the huddle, and also a coach-selected second call that should exploit a defense which is aligned well to defend the first call.  By doing it this way, the QB can just yell out “ALERT!  ALERT!” or something to that effect, and switch the play to the alternate call that everybody is expecting.  Nothing is given away to the defense, because the check-off play will be something different every time the offense huddles.

The Manning offense (I call it that, because there’s nothing else like it) features about six running plays and 10 pass concepts.  Each of those plays will have a number of different code words related to them, so that if I call out GLENGARRY once, and it’s an inside run, I don’t have to use GLENGARRY again for the same inside run later.  I can have GLENGARRY, NEBRASKA, CHATTANOOGA, MARLINESPIKE, and AVALANCHE all mean the same inside running play.

I can also use a lot of dummy words, and have an activating word, which changes by the series.  Manning has used that approach over the years.  You might hear:

Most of that doesn’t mean anything – I just made it up, but let’s say Odd 44 means that the defense is in a three-man front and the two DEs are in 4-techniques.  52 is the Mike is self-explanatory.  Reliable is the activating word, meaning that the word that comes after it, GLENGARRY, indicates the play call.  The rest of it is dummy information.  Maybe Manning says slide left, but that doesn’t mean the offensive line will.  He says overload right, even if there isn’t an overload to the right.

Manning is the only QB in the NFL who is afforded the ability to call his own plays at the line of scrimmage whenever he feels he should.  It’s worked really well, so there’s no reason to change that.  We’ll get into recognition a little later, and how he chooses plays.  For now, just understand that it’s up to him in those moments when he’s barking out random-sounding words, and that some of those words mean things.

Did you catch all the articles lamenting the loss of Spencer Larsen?  Writers love them some fullbacks, mostly because it tends to be a position that’s played by Try Hard White Guys, and writers are just as prone to loving Joe Lunchpail as the average Caucasian fan is.  I was thinking that I ought to suggest to the guy who runs StuffWhitePeopleLike.com to add Fullbacks to the list, but then I saw that he hadn’t updated the site in a year.  TB = Sad Panda.

What does this mean?  Well, it means that staffing is easy, and fewer skill position players need to be dressed for games on offense.  Let’s talk staffing for a minute, based upon the current Broncos roster:

Give or take a draft pick or unexpected free agent signing, that’s probably the group the Broncos will go to war with on Sundays.  (I didn’t bother including filler guys like Mario Fannin, Mark Dell, and Tim Toone, because I don’t think any of them will be good enough to make the roster, underdog love of the masses be damned.)  That’s only 13 players, and when you add three QBs and eight offensive linemen, you are only carrying 24 offensive players.  That means you can carry 26 on defense, which tends to help your special teams.

On game day, you’ll most likely see three RB, four WR, and three TE active, which, when you add those 10 guys to two QBs and seven OL, you’re at 19 offensive players.  After taking 19 offensive guys and three specialists out of 46 active players, you’re left with 24 for defense.  Not subbing much on offense can help the whole team.

Now, let’s go back to 11 and 12 personnel.  Teams which play these groupings will tend to show looks called either 2 by 2 or 1 by 3.  It’s probably obvious from the names, but 2 by 2 means that there are two eligible receivers on each side of the QB, and 1 by 3 means that there is one on one side, and three on the other side.  The Manning offense shows almost all 2 by 2.  Check out the following two diagrams: 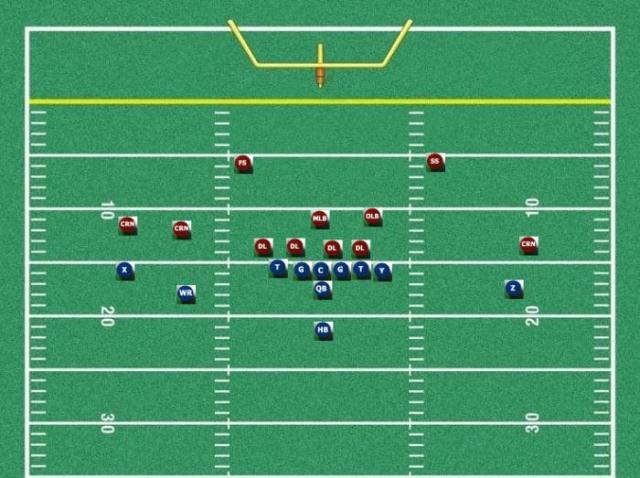 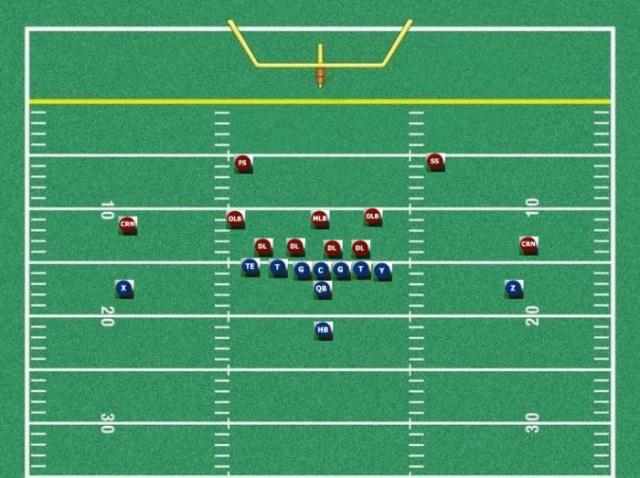 They look almost the same, right?  There is no strong side or weak side, because the C, QB, and RB are all straight in line with the ball, and there are four players on each side of the ball at the snap.  The purpose of this is to ensure that all plays can be run from either 11 or 12 personnel, and that the offensive formation will never give away the nature of the play, or the direction in which it is to be run.

By using the same formations, the same few plays, and having the same players line up in the same positions, the offense gains consistent proficiency in executing what they’re trying to execute.  This isn’t about trickery, it’s about mastery.

Thomas and Decker are very different than any other WRs Manning had in Indianapolis.  They’re both big guys, and he’s been used to small guys.  I don’t expect it to be a problem, but it will be an adjustment for Manning.  He’s used to precision routes from small guys who tend to be best able to run those kind of routes.  Big guys like Thomas and Decker tend to struggle to be as precise in their routes, or to separate as cleanly as small guys do.

Thomas and Decker will have to work on being more precise, and Manning will have to meet them in the middle by getting used to taking advantage of their size.  I think it portends to eventually work out really well.  Caldwell and Willis are the type of guys that Manning is used to, and Jason Hill is a speedster who could compete to play some outside.

Dumbasses in the media misuse the term "H-back" to denote thinner, more receiving-capable TEs.  (Well, maybe they’ve finally changed the meaning to mean what they think it means, but when Joe Gibbs introduced the term in the early 80s, the H-back was actually a big guy whose role was to go in motion and quickly try to block Lawrence Taylor.)

Most teams will like to have a “blocking TE” and a “receiving TE,” but the Broncos will not need to worry so much about the blocker.  The guys they currently have fit really well with what the offense is going to try to do.  Even when the Broncos run, it will be out of pass looks, and it will be quick-hitting in nature, to where a TE just has to dance with a LB in a zone scheme.  It looks a lot like what the Broncos did in the late 90s, actually.  We’ll get to some specifics next week, my schedule willing.

The position that I think is interesting is RB.  I actually think that this is the kind of nickel-all-the-time offense that Knowshon Moreno was born to play in, and if he can stay healthy, I give him a really good chance of being the number-one guy, by virtue of his superior blocking and receiving ability.  He’s really like a more talented version of Joseph Addai.  Both Moreno and McGahee will get to run against a lot of six- and seven-man boxes, and that’s the trick to maximizing the running game on a per-play basis.  The Broncos may only run 20 times per game, but their yards per carry will almost certainly be high.

The offensive line is going to look really good, thanks to Manning.  I suspect he’ll be sacked less than once per game in 2012.  As much as I’ve criticized this Broncos group at times, it’s far more talented than any group Manning ever had in Indianapolis.  Just imagine if Zane Beadles and J.D. Walton come back stronger after being in their first NFL offseason strength program, and if Orlando Franklin improves his footwork and general pass protection technique?

Next time, we’ll start talking about the running game, and getting specific with it.  My plan is to link about five or six articles together as a series, and to have it all be readily available for your in-season reference.  That way, when you are wondering about something you just saw, you can take a look.  And when you want to know who the greatest Bronco ever to wear #72 was, you can look at a different site.  Have a good weekend, friends.