Drew Brees says the lockout will be over soon.

Since you can always trust a guy from New Orleans to give you a calm and reasonable assessment of any situation, I'd say Brees is on to something.

We're about to get NFL football again.

The signs are there.  Here are ten for you:

10.  You've spent significant parts of your day wondering if Hope Solo is related to Han Solo.  Not only is she the face of U.S. women's soccer, she knows wookies!

9.  You've asked yourself, "Who's hotter?  Tim Tebow, Brady Quinn, or Eric Decker?"  My vote goes to Decker, whose teammates should fine him retroactively for this photo shoot.   I didn't realize those Minnesota locker rooms were so cold. 8. Your wife/girlfriend/mother actually got to you to clean out the garage.  If your wife or girlfriend is your mother, please find yourself a nice Raiders website.

7. You reread Peter King's columns from last year and decided to Rick Roll yourself.   If I caught you, please find yourself a nice Raiders website.

6. You've pondered the high-school geometry classic:  if Brandon Marshall slips on a McDonald's wrapper at a 45-degree angle, and his girlfriend is standing at a 90-degree angle, at what angle would she have to wield her knife in order to form a triangle? (The only image I could find of cheerleaders eating Big Macs)

5.  You clicked through several hundred channels trying to find coverage of Tony Romo's wedding so that you wouldn't have to watch an interview with Tiki Barber.

4.  You used the time to write Pat Bowlen 1,000 emails asking to have Simon Fletcher put into the Ring of Fame (why haven't you responded to me, Pat?!?!). 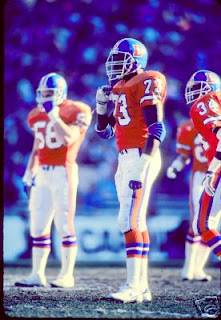 (Possibly the baddest dude to ever walk the planet--Simon Fletcher)

3.  You thought you could distract yourself by watching the Rockies win.

2.  You racked up thousands of dollars on your credit cards eating at Elway's in the hopes that you would run into John Elway.