Happy Wedneday, friends. I got started watching the All-22 video last night, but unfortunately, I got sidetracked from finishing it. For today, I thought we'd look at a key play from the Broncos/Eagles game, and break down why it worked.

It's funny, because I criticize Troy Aikman's broadcasting skills, but he actually didn't do a bad job of spotting what happened here, and explaining it live. I think there's a bit more to what he had to say, though, and that seeing the whole thing is instructive for our readers.

The play in question is Wes Welker's first TD reception of the game, which made the score 7-0, Broncos. It was 3rd-and-2 from the Eagles' six-yard line, and the Broncos ran a concept that was highly likely to at least pick up the first down. Based on Philly's defensive tactics, it became an almost guaranteed TD.

The Broncos come out in a one-by-three look, with TE Julius Thomas at the top of the screen, and WRs Wes Welker, Demaryius Thomas, and Eric Decker on the bottom, from inside to outside. That's a pretty dangerous trio in a small area, and most of the time, defenses will zone that kind of look down by the goal line. That's not what the Eagles do though. 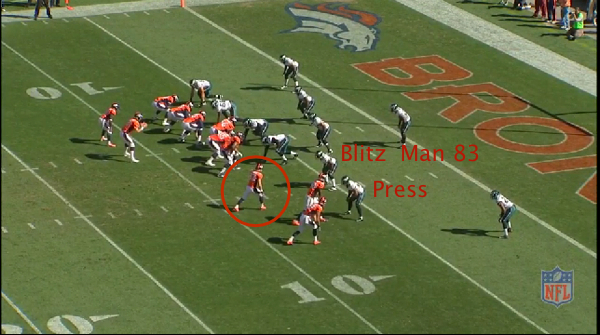 Welker is circled, and as mentioned, he's the inside guy. He has a CB lined up across from him, but his body posture, and the fact that he's looking at the ball in the center's hand - and not at Welker - suggest strongly that he's going to be blitzing off the slot. The middle safety is also leaning slightly to his left (the offense's right), suggesting that he'll probably be chasing Welker.

Thomas has a CB in front of him, in press technique. Decker is getting a lot of cushion outside. 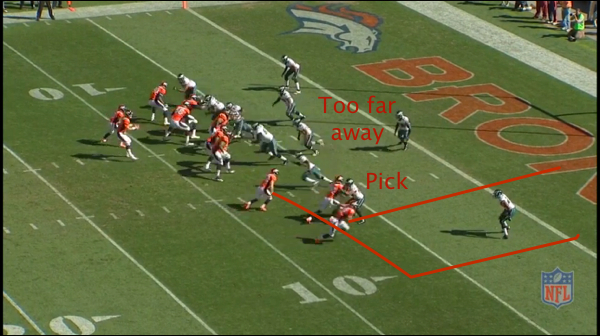 At the snap, we see the slot CB blitzing (as expected), and the middle safety running out to try to cover Welker (as expected). We also see that Thomas and Knowshon Moreno are staying in to block, and that the seven-man rush is going to be picked up. The CB on Thomas has jammed him (somewhat), and that creates a nice natural pick for Welker to run behind. 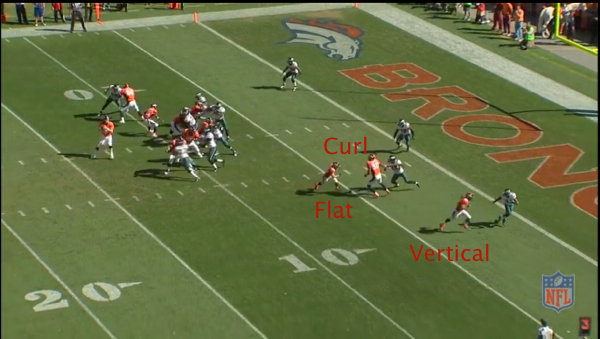 The Broncos are running a Curl-Flat concept, which is very popular near the goal line, and in short-yardage situations, because it works well against both man and zone coverage. It beats man coverage because of the natural pick, and it is successful against most zone coverages because the curl and flat zones are often the responsibility of the same defender.

Even if there is an outside flat defender (like in Cover 2), the vertical route by Decker should run him off. Thomas is running a curl, and you can see him sitting down here. Welker is running to the flat, and there's no way that safety is getting over the natural pick of the curl route.

To the credit of the Eagles, the guy covering Thomas sees what's happening, and he tries to get out to Welker too, but against Wes, he has no chance. 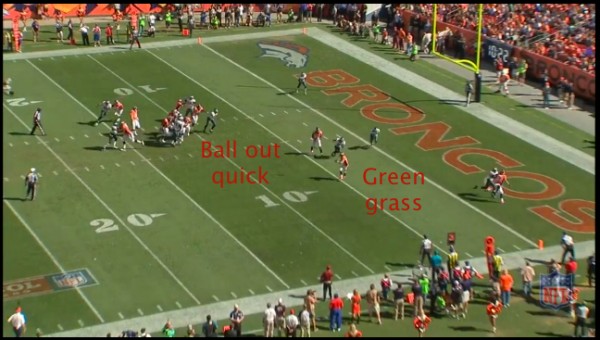 You can see both Eagles defenders trying to get to Welker as he works to catch the ball. Peyton Manning already has it in the air at this point, and you can actually see the shadow of the ball next to the "k" in "quick." With all that green grass in front of him (due to Decker running off the outside defender), Welker is going to score easily.

As a side note, take a look at the pocket that Manning is standing in. Julius Thomas and RT Orlando Franklin have ridden their rushers deep into the backfield, and the interior guys have the rest of the seven-man rush blocked well. Even for a quick-hitting play like this, protection like that makes a big difference.

This is the sort of play that a proficient offense consistently makes. All eleven offensive players perform their jobs to near-perfection, and the result is six points.

I bet the Broncos run this concept 10 more times this season in similar situations, and that they'll score 9 out of those 10 times.