Happy Monday, friends. There was something subtle but important that happened in the Broncos-Giants game, and I held it out from YGS on Saturday so that we could look at it on its own, and ponder it.

In the playoff disaster last season, the Broncos faced a very similar situation (3rd-and-7 from the Denver 47, 2:00 to go, up 35-28), and were content to hand the ball off to Ronnie Hillman for no gain. The Broncos punted the ball, and three plays later, Jacoby Jones was in the end zone.

At IAOFM, we’re big believers that possession is more important than time, and that it’s a worthy risk to throw the ball on 3rd-and-long, especially when Peyton Manning is the guy throwing the ball. What I’m going to do is show you the play, and we’ll think about why it worked.

In this case, the Broncos are at the Giants 41-yard line, and they've just had runs by Montee Ball for zero and three yards against a heavily stacked Giants box. Institutionally, the Giants know John Fox well, and are counting on some Foxball. 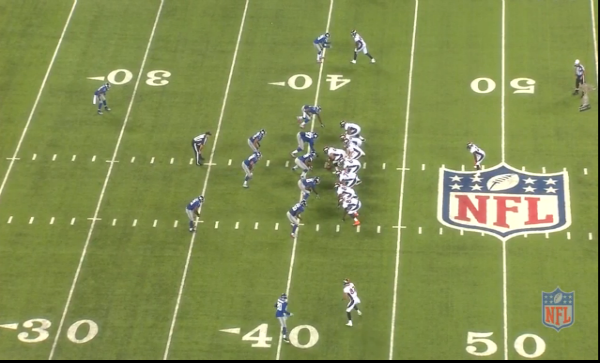 The Giants have eight men in the box, and the free safety is pretty close to the line of scrimmage, favoring the side that Thomas is on.

On the wide side of the field, outside the hashmarks, there are only two players – Decker and cornerback Prince Amukamara. Decker is going to motion tight to the line, which the Broncos commonly do when they’re going to run the ball. In the above screenshot, you can see him starting to move that way. 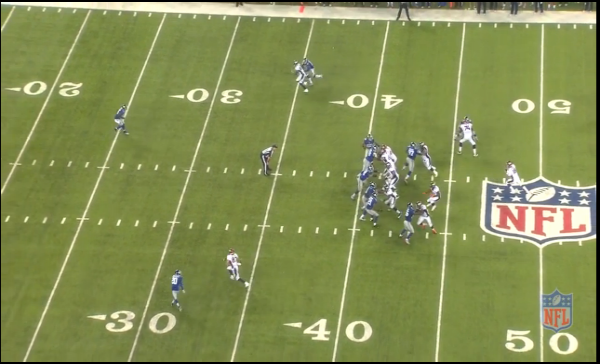 There’s a play fake, and Decker has a free inside release against outside leverage. He runs the route like a skinny post, while closing down the cushion that Amukamara had given him. Amukamara reacts to the inside, knowing that he has no help. 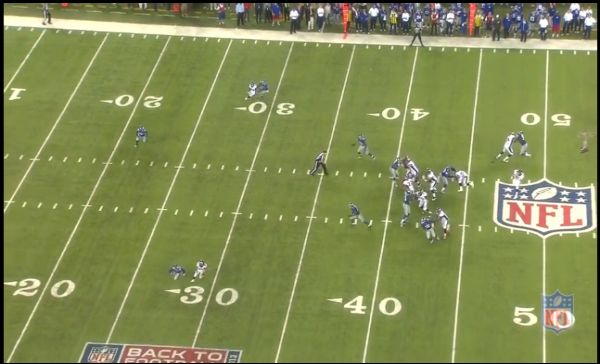 Decker breaks back to the outside, which turns Amukamara, and creates separation. Manning delivers a good throw, right on time, and the Broncos pick up the first down. Decker goes out of bounds, which is sub-optimal, but with a new set of downs, you can live with it.

This works for a few reasons, and for these reasons, it's almost always going to work in a similar situation:

Hopefully, the success of this play has two direct effects:

We can only hope that both effects come to pass.

That’s all I have, friends. Here’s to having the balls to go for it, and here’s to putting up a fifty-burger on the Raiders tonight.