The Recipe: 7 ways to attack Cover 3

Happy Thursday, friends. As you read this, I'll be in San Diego attending a sales and use tax seminar. As I write this Wednesday night, I'm also in San Diego, in a (somewhat disappointing) hotel room, overlooking the bay, and we just got back from a nice dinner in Little Italy.

Guess how many people I saw rocking Chargers gear, in a high foot traffic area, a mere two weeks after their feel-good playoff run ended? I saw exactly one of them, which is par for the course for this town.

I'm not here to talk about weak-ass Chargers fans, though. It's Super Bowl week, and I promised y'all some material. If you'll follow me across the jump, I'm fixing to drop some knowledge on you, as Stuart Scott would say.

The Seahawks, to the casual fan, play all kinds of press man-to-man coverage. In reality, they don't. They play a base Cover 3 scheme, like many high school teams do. As Peyton Manning said on the radio, on Thursday, there's some similarity in the overarching schematic attitudes of the Broncos offense and the Seahawks defense.

We run our best stuff, over and over and over, and we hang our hats on our ability to execute those few plays.

Today is Fun With Diagrams Day at IAOFM. I'm going to start by explaining Cover 3 and how it works, and then I'm going to get into some good ways to attack it. Here'e the first diagram: 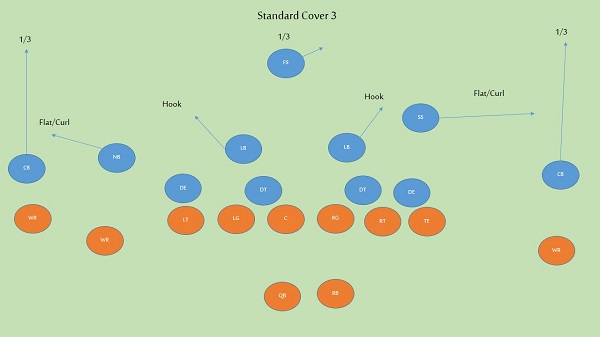 This shows the Seahawks (the blue guys) in a 4-2-5 nickel grouping, which is typical for them against the 11 personnel that the Broncos favor, and which I have them showing here. There are two main benefits of Cover 3, which is the coverage scheme we're looking at here.

As you can see, the two cornerbacks and the free safety are all playing one third of the deep zone. In the underneath area, the nickelback, both linebackers, and the strong safety play four across, but not necessarily fourths. That is, they play from inside out, and the nickelback and strong safety tend to have bigger zones to cover from the curl area out to the flat area on the sideline.

What the Seahawks do a little differently is that they'll often have their corners press at the line of scrimmage, and run the 12-yard vertical stem with the receiver, reading him all the way. If he goes deep, the corner stays over top of him in his deep third. If he runs an out, a post, or a comeback, and nobody else is threatening that deep third, the corner will often play man coverage on that route.

The pass rush typically comes from the front four, and as I explained the other day, the Broncos' highly efficient up-tempo style threatens to keep the same group of defensive linemen on the field for long stretches, which will almost certainly negate their pass rush.

In general, Cover 3 gives up the short outside throws, and it can be attacked in its seams, like any zone defense can. We're going to look at seven passing concepts (in honor of John Elway) that can take advantage of its weaknesses. 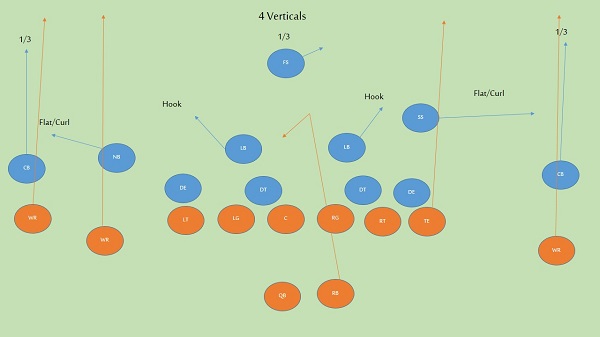 For simplicity's sake, I'm going to keep the Broncos in 2-by-2 alignments throughout these diagrams, but as Andy Benoit pointed out, the Broncos can really cause matchup problems by going to 3-by-1 looks. Here, the Broncos employ the best Cover 3 beater of all, which is Four Verticals.

Simply, all four receivers run go routes. Peyton Manning reads the leverage of the corners and the steps of the free safety. All four guys can't be covered adequately by three deep defenders. The Broncos run receivers vertically on almost every play, and if they can get adequate protection, this can be a touchdown play.

A variation here that can be deadly is if the outside receivers run comebacks at 15 yards, and only the inside guys run full-on go routes. Those corners are going to want to squat on the comebacks, and that leaves the single-high safety in an impossible situation. 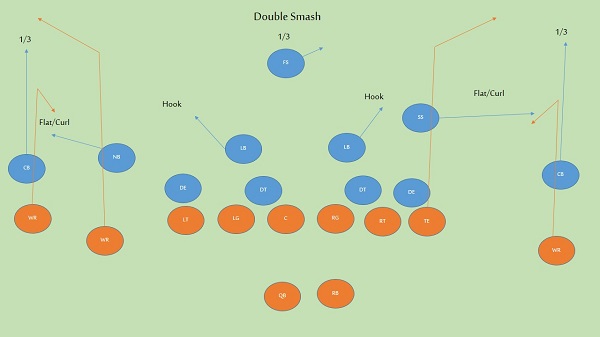 In a Smash concept, the outside receiver runs a short inside route (typically a curl or a square-in) and the inside receiver runs a deeper corner route. The way I see this being run is with Demaryius Thomas outside and Eric Decker in the slot, both on the left. That way, Richard Sherman is stuck on the away side of the play.

What you want to see happen is the corner stick too tightly to the outside receiver and let the slot guy get behind him. This ordinarily isn't a great concept against Cover 3, because you're running two guys to different zones that each have a cover man assigned.

But I think it will work against Seattle becuase Byron Maxwell can get caught playing too tight to his man, and take a false step getting back into his zone. Manning throws touchdown passes on one false step, and if you hurt the Seahawks with this concept once or twice, it's likely to force them to play their corners further off, and to play Cover 3 more traditionally. If that happens, they're toast.

When a defensive back plays with outside leverage, like they generally do in zone coverage schemes, the best thing an offense can do is run plays that take advantage of that, by releasing the receivers inside, and having them run away from the leverage.

For the most part, the help in a zone scheme is inside, but if you clear out that help by running double posts, you've effectively created a situation where the outside receiver is in single coverage, with a clean inside release, and no help.

The Broncos like to used Double Post against Cover 3, and they've scored a few touchdowns with it this year. I look for it to be used a good deal on Sunday. 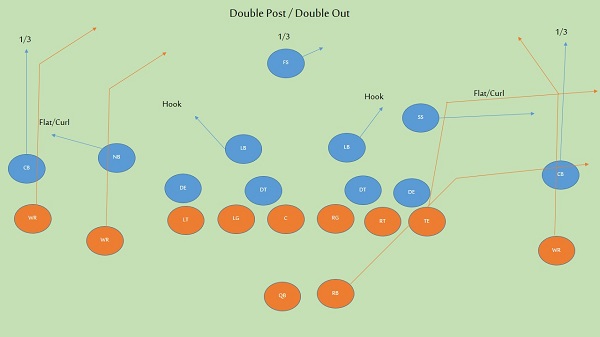 Here, the Double Post side on the offense's left isn't really in play, unless the free safety dives hard to the three-receiver side on the right. What this concept is doing is forcing the strong safety (Kam Chancellor for the Seahawks) to make a decision where he's always going to be wrong.

The tight end releases outside and runs a 12-yard out route, running away from the SS at the very top of his zone. The Z wideout runs a deep skinny post to occupy the left cornerback, and make him turn and run. The running back chips on his way out, and runs to the flat.

The weakness of Cover 3 is in the flats, because the shallow outside defenders (NB and SS) are reading for the curl first, and then working outside to the flat secondarily. If you run two receivers to the same short outside zone at 10 yards' difference in depths, it's uncoverable.

The best outcome is if the SS gives up completions in the flat a few times, starts to guess on the pattern, and then tries to split the difference. Then, the tight end can really start dominating. 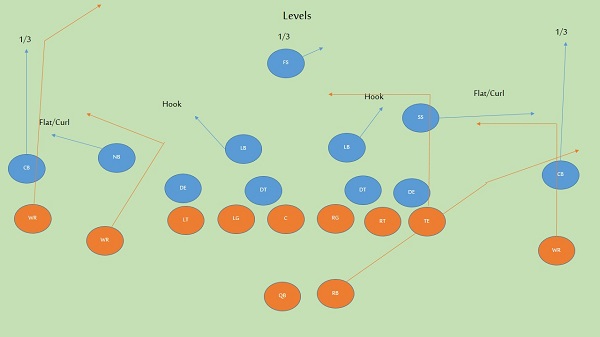 Levels is a classic Manning concept, and the beauty of it is that it's good against both zone and man coverage. It has several variations, but note here that the tight end runs his route at seven yards, and the Z wide receiver runs his route at five yards. The subtle key to executing this against zone is for the quarterback to play with eye discipline, and to help get the receivers open by forcing zone drift by the defenders.

Notice also that we're having the running back chip and run to the flat again. He's likely to be wide open there if the ball is thrown on time, and makes for a terrific safety valve, if the early zone drops are good. The danger is that the left corner will start jumping the flat immediately upon the outside receiver's cut, rather than chasing the Z across the field.

If that starts happening, the adjustment is to have the Z run a double move, going in, and then up. 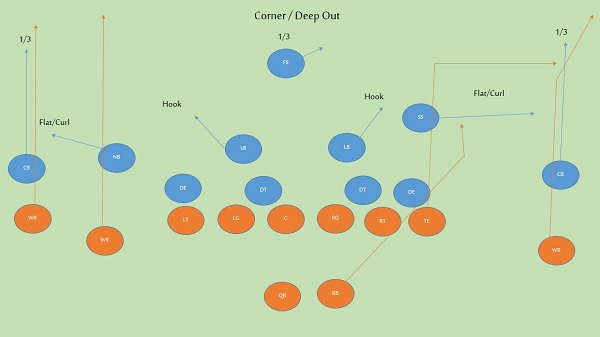 This play takes a while to develop, but I watched the Colts bust a long ball TD over the head of Sherman with T.Y. Hilton on it in Week 5. Here, conceptually, we're flooding the deep outside zone, and forcing the left corner to make a decision. Against the Colts, Sherman squatted on the deep out run by Coby Fleener, and Hilton ran free to the deep corner. The running back runs his route expressly to sit down in the strong safety's zone, to force him to stay shallow.

For the Colts, this worked very well as a play action pass on 1st and 10. The Seahawks had their run defender linemen in, so there was little pressure. Of course, the Broncos have the best pass protection group in the NFL, so that will help. 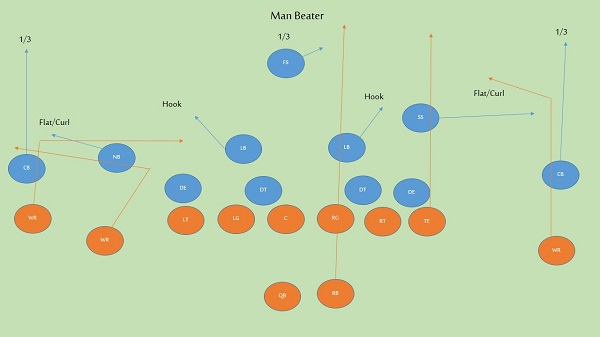 Ordinarily, you'd run a man beater (AKA rub play) against man coverage, but with the way the Seahawks play zone, especially on the outside, it has some application.

What you want is a lot of physical engagement between the X wideout and the right corner, such that the slot receiver can start his route with a hard inside step and then bust it outside, running around the entanglement of bodies. There's no way the nickelback can run with him, and eventually, it will force a Cover 3 defense to play further off.

And we all know what Peyton Manning does to zone defenses.