Lost in the Tim Tebow debate this year has been the upswing on the defensive side of the ball.

The Broncos have yet to become the defense they really want to be.  That much is clear.  Yet they are no longer last in the league in yards allowed per game (22nd).

Much of this incremental upswing can be attributed to Von Miller and the signing of Brodrick Bunkley.  However, I believe the signing of defensive coordinator Dennis Allen--along with his aggressive style and 4-3 scheme--has been a big factor.  We all thought Allen would create more pressure on the quarterback.  It turns out Broncos fans were correct in that assumption.

Today I'd like to look at some of the tools that Allen uses against the pass to get the most out of a defense that was one of the worst in Broncos history only a year ago.

One way to get to the quarterback is to overload one side of the line and create a numbers advantage.  A good example of this comes from the Miami game.  With the score tied early in the first quarter and the Dolphins facing a third down, the Broncos show quarterback Matt Moore (8) a dime personnel package (six defensive backs) and a deep Cover 2. The indicator of a Cover 2 is the two-deep safety look in which the safeties are each responsible for half the field.  Allen also shows man coverage on the corners (the bump position and inside leverage are the giveaways). 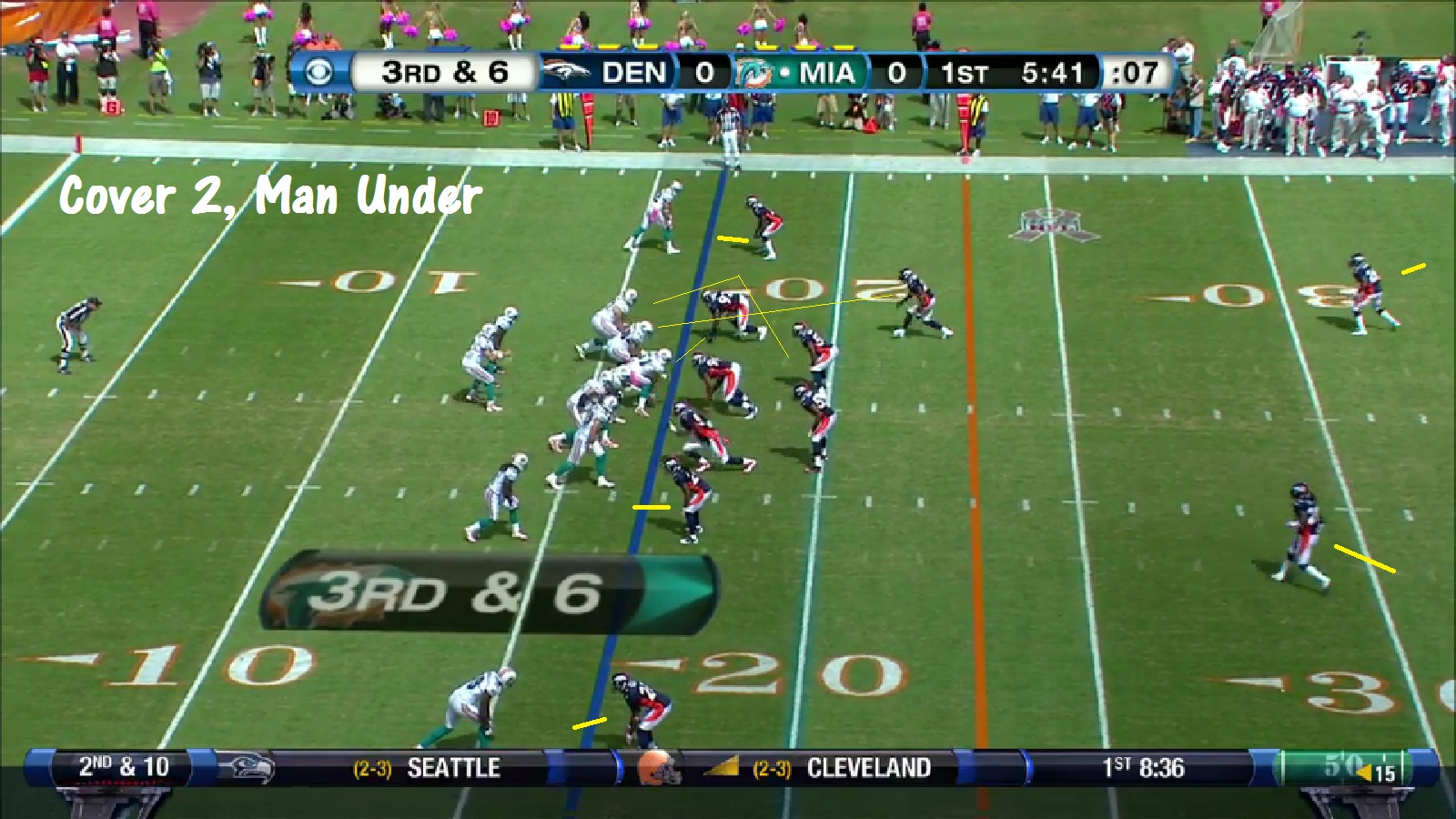 Allen's goal on this play is to overload the left side of the offensive line by bringing Brian Dawkins (20) on the blitz.  The blitz is further magnified through a loop stunt between Elvis Dumervil (92) and D.J. Williams (55). Notice that Williams doesn't appear as if he's blitzing.  As far as Moore can tell presnap, Williams isn't coming.  Further, note that Dawkins is near the box, but he's not necessarily giving away the safety blitz either.

Here is how the play looks a few seconds later: 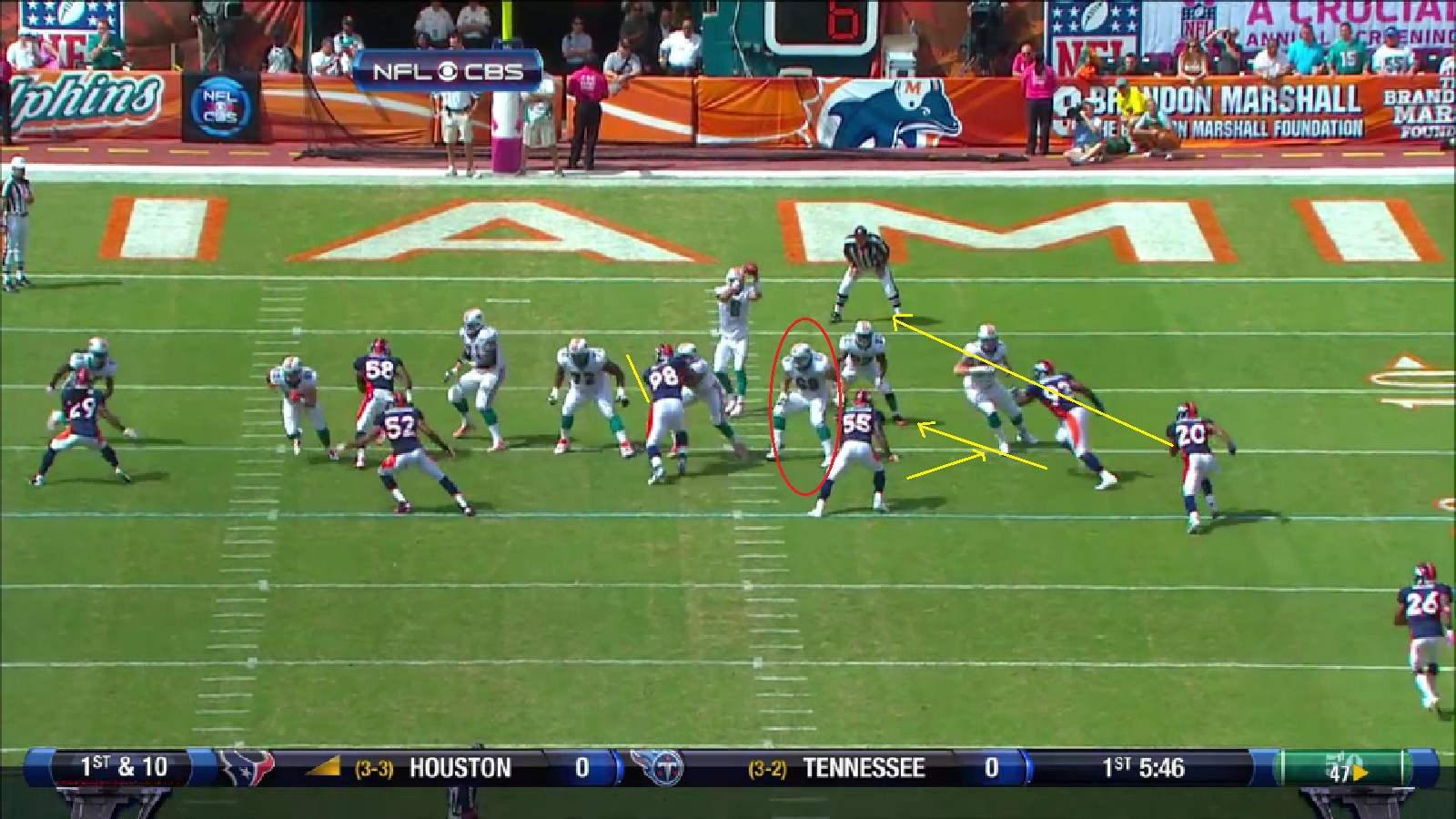 Moore takes the snap.  Dawkins guns for him off the end and Dumervil pushes through the inside C gap.  At the same time, D.J. Williams starts to loop around the D gap.  He and Dawkins are effectively taking the same path.  Miami's running back does what any good running back does, which is to pass protect from the inside out.  So he's got his eyes all over Williams.

Ryan McBean (98) plays another critical role here.  He starts the play in a zero technique, but his job here is to pull the the center away from the overload.

Finally, the Broncos catch a break because the left guard doesn't sniff out the overload.  A few seconds later, here's what Matt Moore sees: 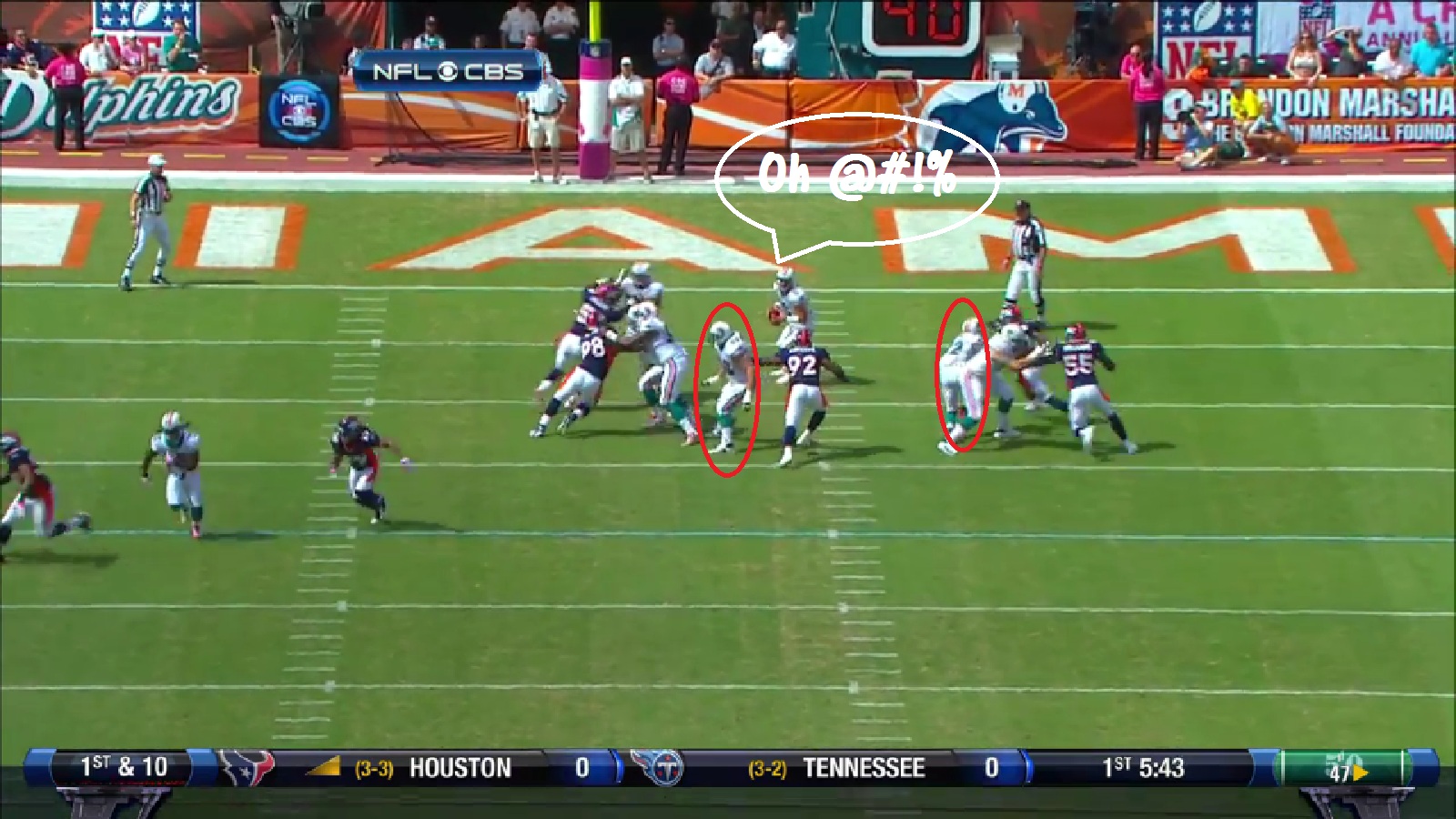 The left tackle, Jake Long, blocks D.J. Williams, but Elvis Dumervil now has a clear lane to the QB; Dawkins has blown past the corner.  The running back was so concerned with his responsibility (D.J. Williams), he couldn't break off from his assignment in time.  The result of the play is a sack by Dawkins.

There are two things about this play that demonstrate Allen's genius. First, he wisely uses Dawkins as an extra blitzer.  Dawkins is a liability in coverage these days, so Allen plays to his strengths.  Second, he doesn't give away the blitz presnap.  Dawkins and Williams wait until the snap of the ball before attacking.  Had they flinched and given away their intentions before the snap, Moore would have likely audibled.

Dennis Allen doesn't only blitz on passing downs.  He has no problem taking a calculated risk.  The following play is an example of this.  The San Diego Chargers were facing a first-and-10 up by thirteen points in the third quarter.  The Chargers like to use play action in situations like this. 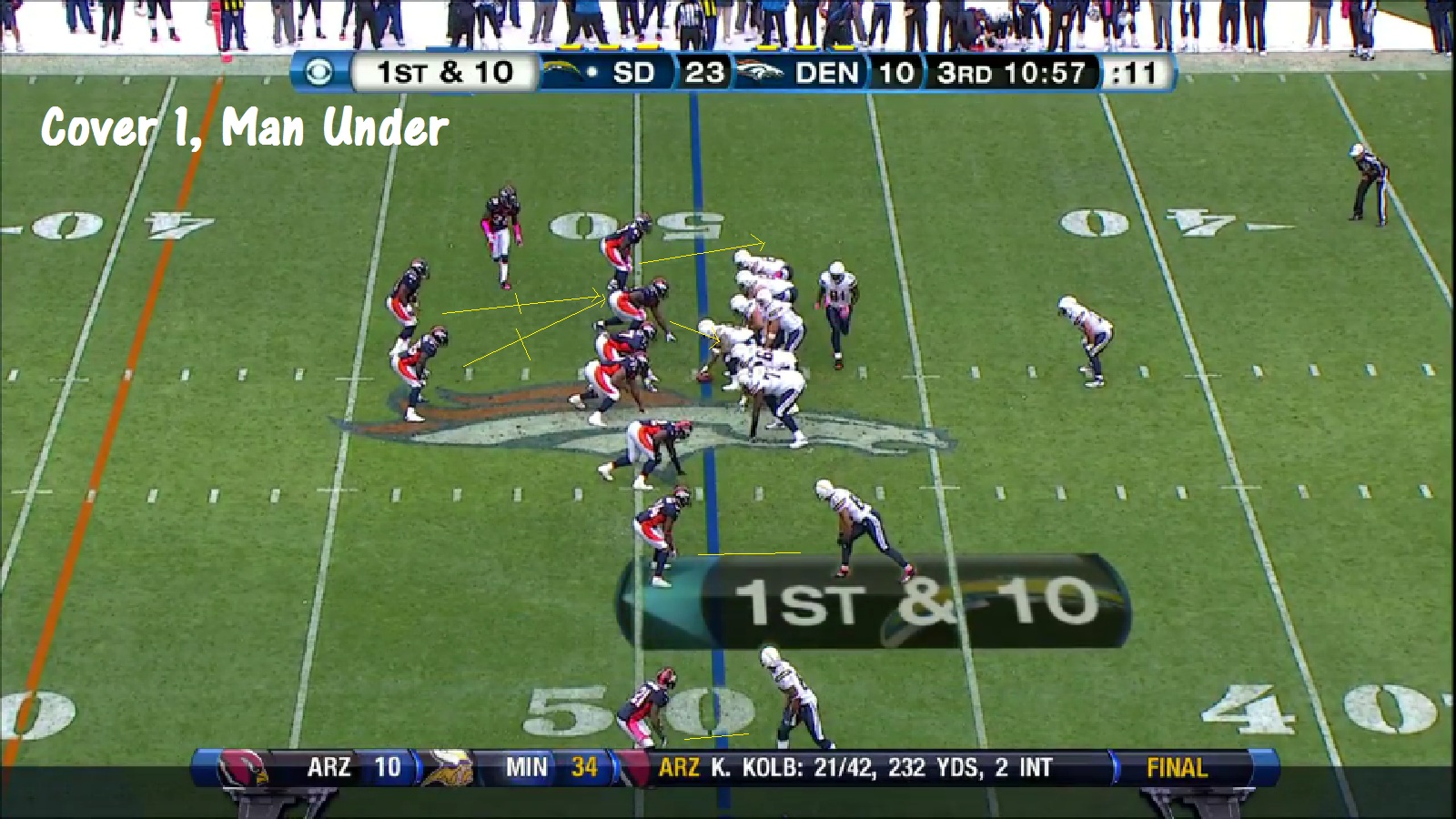 We can't see the deep safety in this frame, but trust me, he's there.  So Rivers (17) is facing a Cover 1 with--typical of Dennis Allen--man coverage underneath.

What Allen does here is a brilliant stroke.  He has his linebackers first read run or pass.  If they determine it's a pass, they come on a delayed blitz.  Both of them hit the C gap as hard as possible.  A few moment later, here is how the play develops: 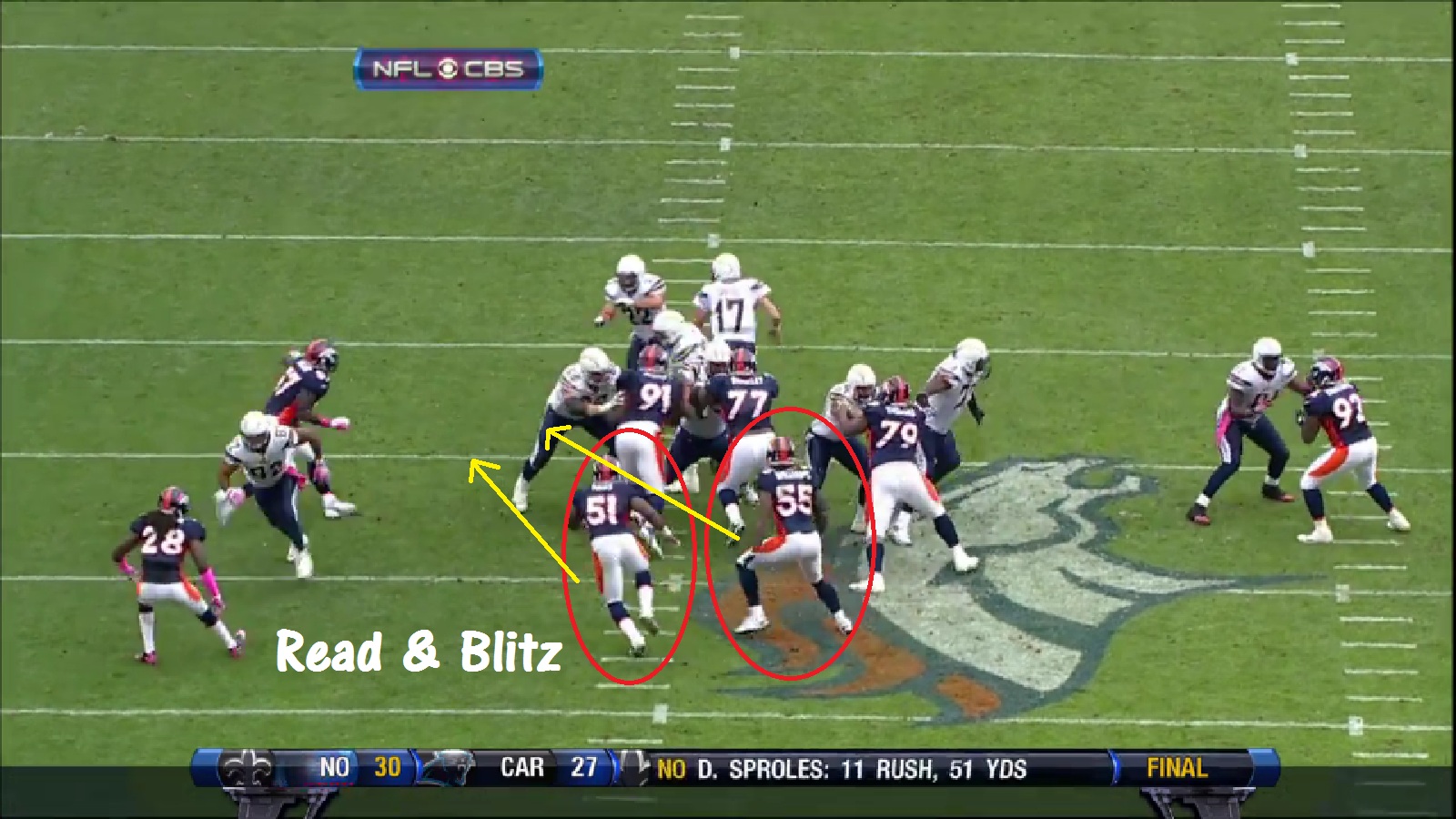 Rivers play actions while the guard pulls across the formation to kick out Mario Haggan (57).  The running back runs to the flat.  This creates a perfect opening for both Joe Mays (51) and D.J. Williams (55).  The next frame-taken a second later--shows just how perfect the lane is. 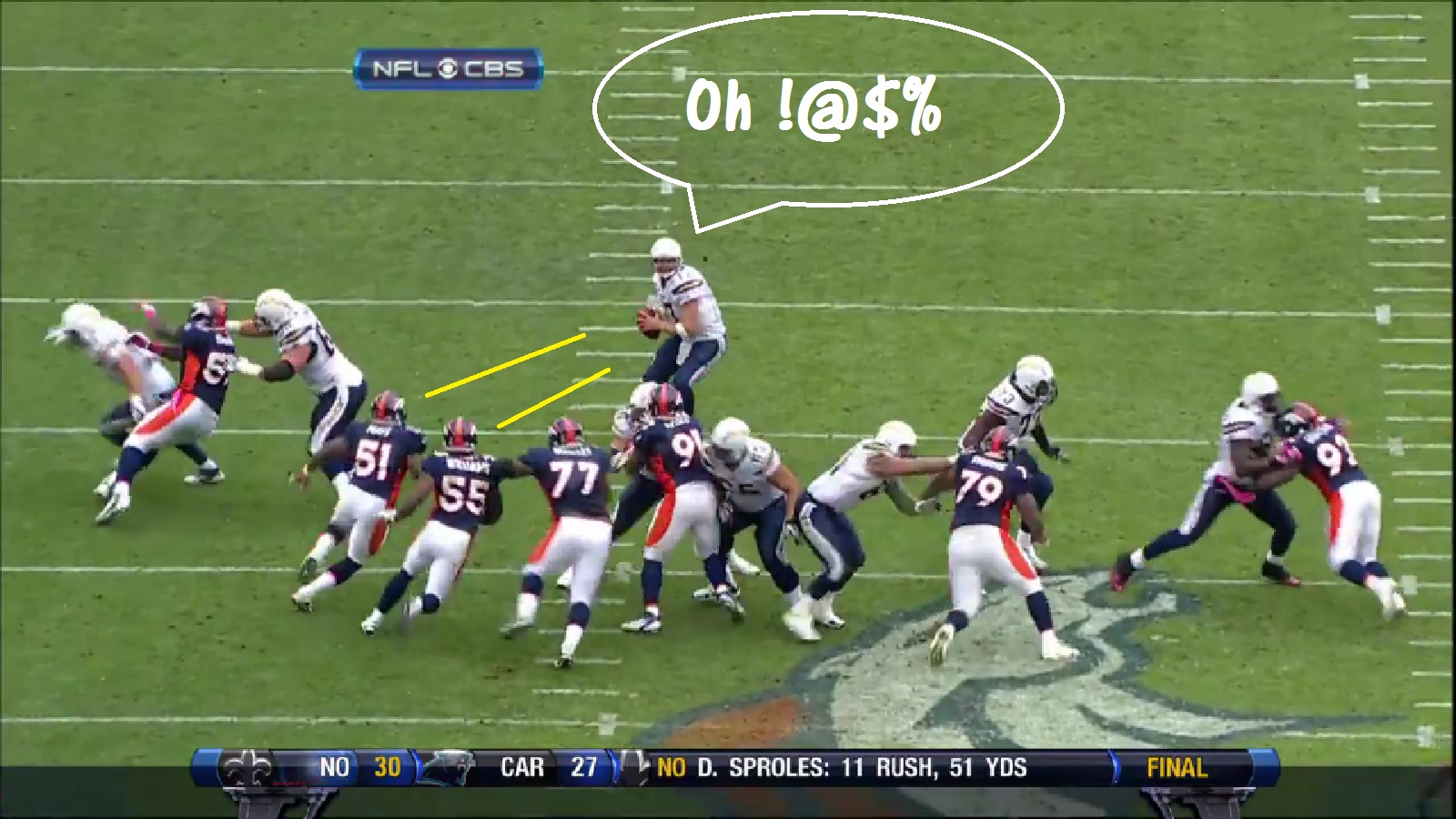 It was a great call from Allen for several reasons.  First, the delayed blitz has effectively created a three-on-one numbers advantage for the Broncos. Second, it was disguised so that it didn't appear as an overload on the presnap read (sorry, Phil).  Lastly, it created pressure without Full Monty risk.  Mays and Williams didn't blitz at the start of the play.  Instead, they read through the run/pas progression.

Our next lesson from Master Allen comes in the form of a Cover 3 Zone Under disguised as a Cover 2.  It came against the Lions on a 3rd and 9.  Allen showed Matt Stafford (9) a dime package and what looks, upon first glance, to be a Cover 2. 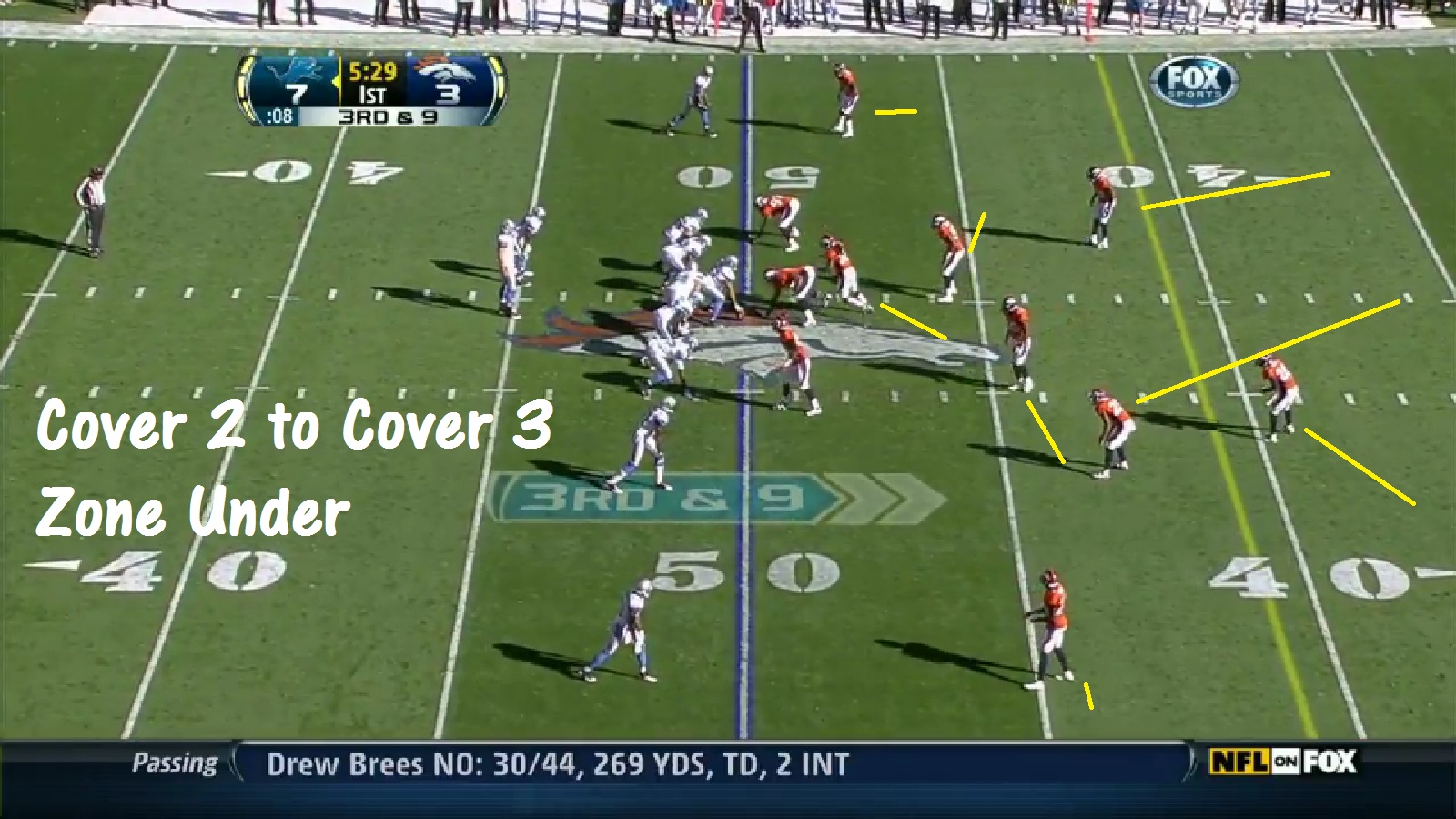 Cornerback Jonathan Wilhite (29) mills around at the line of scrimmage to (hopefully) give Stafford the impression that he's a potential blitzer.  I doubt it fools Stafford given the rest of the front (three defensive linemen with linebackers sitting deep), but often the goal of presnap movement is simply getting into the quarterback's tiny head.

I've drawn the zone drops for all of the defenders.  As it turns out, Allen is going to drop eight into coverage and only rush three: 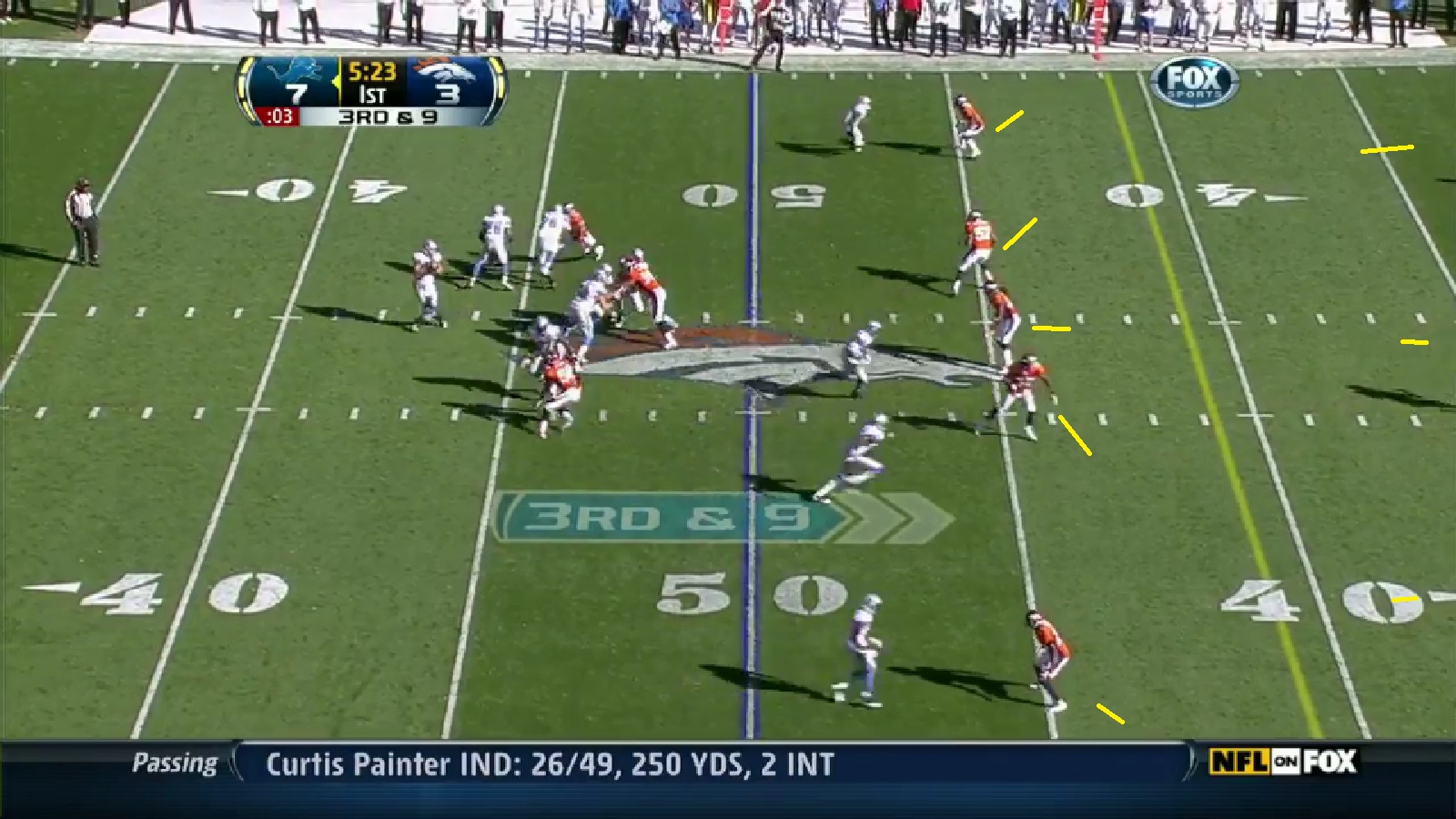 The coverage morphs from a Cover 2 to a Cover 3 within seconds.  All of the underneath defenders also play zone.

It's a perfect coverage from Allen and takes away almost all of the opportunities for the Lions to get open at the sticks on 3rd and 9.  Stafford is left looking at a ton of orange jerseys.Where are you going to throw the ball?  The quarterback is almost always left dumping the ball off and hoping a back or receiver can make a play.

Here's how the coverage looks on the back end: 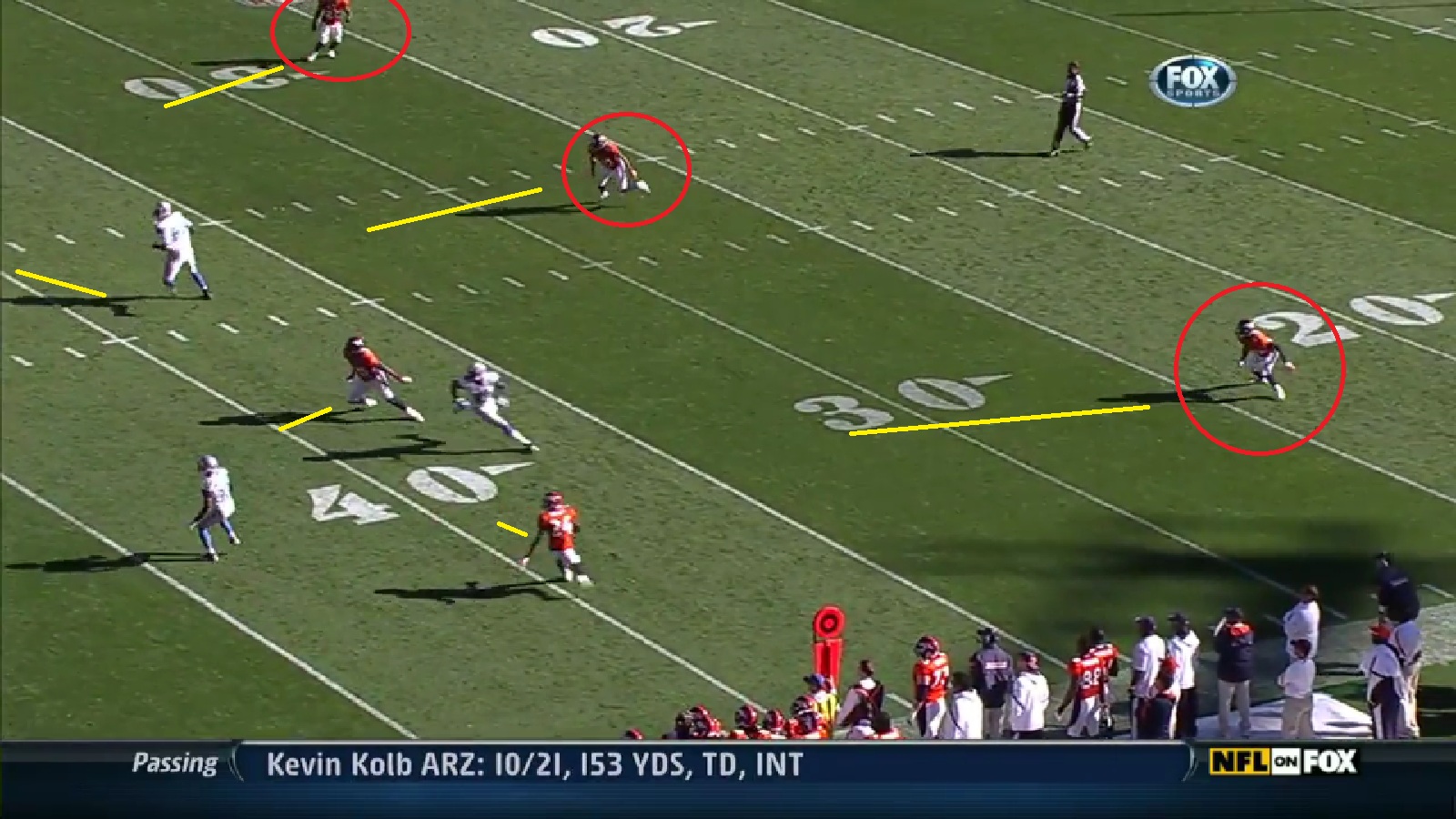 Although Cover 2 is used much more frequently in the NFL, I love the symmetry of the Cover 3.  It's a beautiful thing; the deep secondary is split perfectly into thirds.  There is absolutely no way on earth that Megatron is getting behind the defense on this play.  At the same time, the underneath zone prevents the Lions from getting a first down.

It was another great call by Allen.  It further demonstrates he's not a mad bomber, sending blitzers without purpose or simply because he can.  He knows when to mix it up.  In this case, the perceived deep threat from the Lions' receivers was sufficent for Allen to drop eight defenders and force Stafford to make an amazing throw.  The play resulted in a quarterback sack by none other than Ryan McBean.

Our last tool from the Dennis Allen toolbox is simple enough--overload one side of the line while actually bringing pressure from the other.  Here's an example from the Cincinnati game where the Bengals were facing a 2nd and 10. 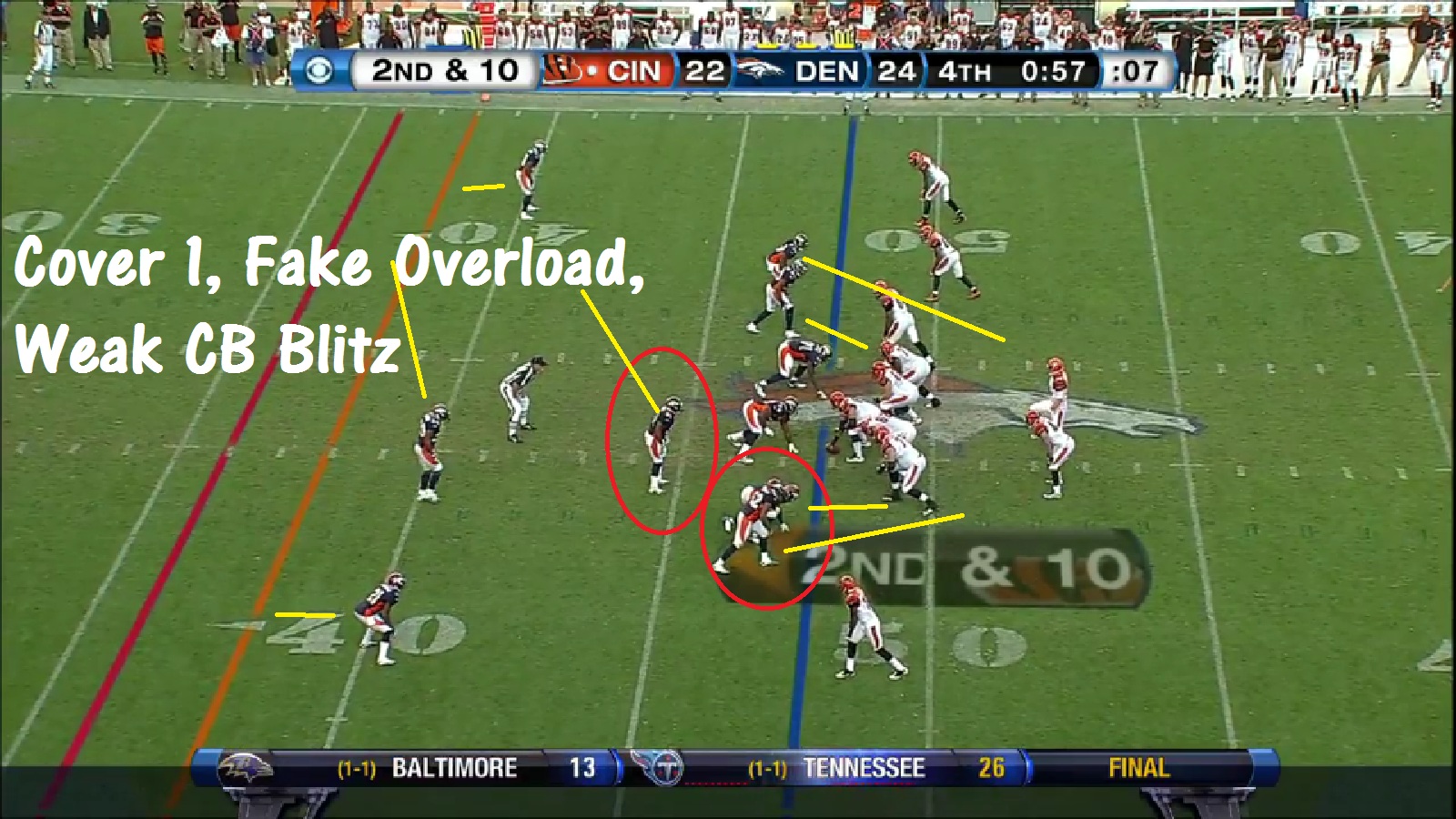 Andy Dalton (14) is a young (but good) quarterback.  One of the best ways to confuse a young QB is to show one thing, but do another.  Here Allen plays his tackles and ends wide on the left side of the offensive formation. He further slides out a linebacker to create the impression of additional pressure. Allen wants the protection to fall to that side. That's because his real weapon on this play is Johnathan Wilhite.

Notice Wilhite (29). He's lined up as if he's playing man coverage, but in truth, he's about to light Andy Dalton up as we'll see in the next frame. 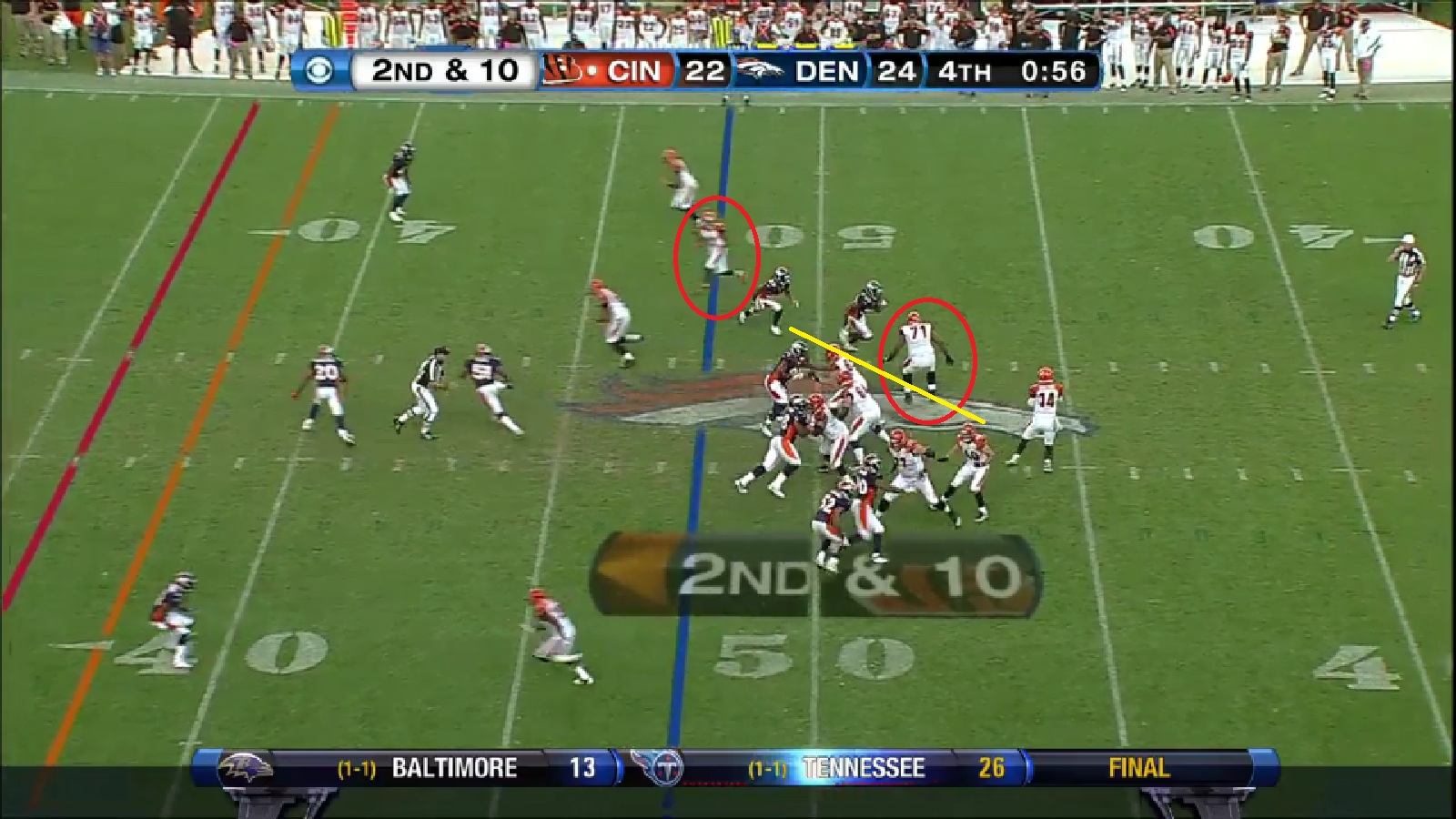 Dalton recognizes the coverage and is about to drop the ball to his hot read while Joe Mays and Brian Dawkins try to get to their zone drops.  That's the bad news.  The good news is that Wilhite is immediately into Dalton's throwing lane, so it doesn't matter. 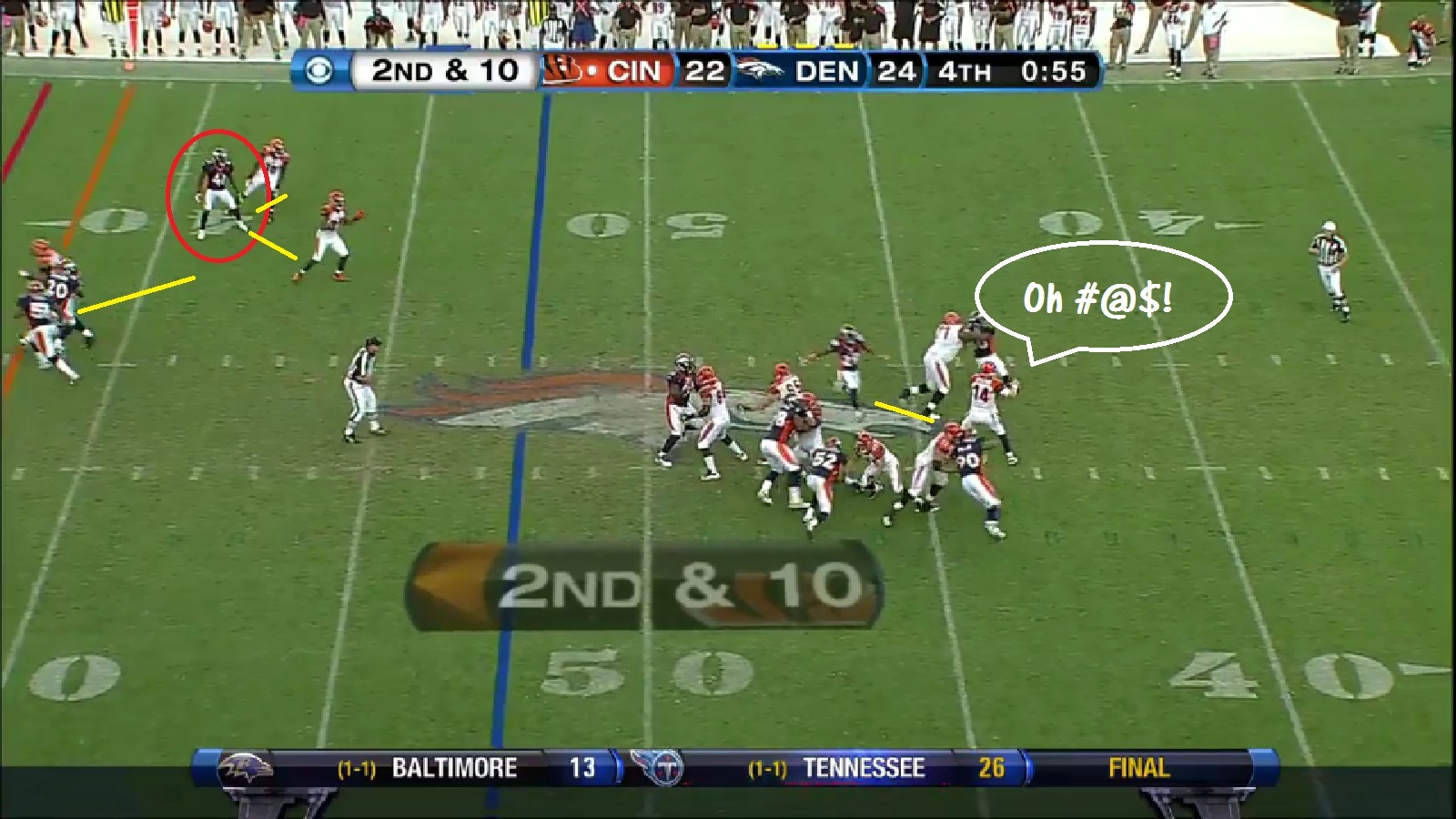 Wilhite jumps into the face of Dalton, who is forced to take the sack.  Had Dalton made the throw, it still would have required a great play by his receiver after the catch.

Dennis Allen has lived up to his reputation as a Gregg Williams' pupil and an aggressive defensive coordinator.  He rarely sits back and lets the offense dictate to the Broncos' defense despite being outmanned in most games.  He disguises effectively, he mixes up coverages, and he uses his personnel in the right way.  He's made enough strides thus far to break the curse of a long line of one-year defensive coordinators.

Mark it Zero • The Playbook Abides