The Dude Abides: The Stats That Don’t Lie, Week 8

"Sure, The Stats That Don't Lie could have stayed in the past. They could have even been king. But in their own way, they ARE king. Hail to the king, baby."

--Bruce Campbell
Week 8 was Halloween weekend in the NFL.  There were some tricks (more teams rolling out The Wildcat), there were some treats (Brett Favre's saccharine-laced, I love Green Bay speech), but 8 week will be best known for the number of teams that got carved up like pumpkins.
Including your Denver Broncos.  In what appeared to be the most ghoulish of all acts, Denver dressed up like the Oakland Raiders and scared its fans by losing all of the important statistical battles.

Welcome to The Stats That Don't Lie for Week 8.   Your headless horseman of stats.  The razor blade in your statistical candy apple.   These are the stats that keep Freddy Krueger up all night.  Again, they are: Turnovers, Field Position, Time of Possession, and 3rd Down Efficiency.

As you can imagine, the Broncos took a nosedive after this week in their rankings.

These rankings reveal a dangerous game Denver continues to play.  On average, they are starting drives on the 26.92-yard line, so they are not helping themselves (or Kyle Orton) with a short field.   You saw this again against the Ravens on Sunday.  Denver's average starting field position was the 20.55-yard line.  For all of his juking and twists and spins, Eddie Royal would have done as well by simply letting the ball fly through the end zone.  In Eddie's defense, the return game was garbage.

Another disturbing trend is Denver's 3rd-down efficiency, which stands (avg. per game) at 37.18%, right at the league average.  If Denver is going to be an above-average team, its 3rd-down efficiency need to be above average.   Indianapolis stands at over 50% on 3rd downs and New Orleans is at 46.43%, in case you were wondering.  Both of these teams have Super Bowl aspirations.  If Denver has these same aspirations, they can begin with improving on 3rd down.

Others have pointed out the two-part problem in this.  One, Denver is getting less yards on 1st and 2nd downs, putting them in more difficult 3rd-and-long situations.   This is certainly the risk/reward you take when you pass on 1st down. Two, Denver is simply not converting the 3rd downs they should.  I'll leave it to you to decide if this is due to the transition from a zone-blocking scheme to a power-blocking scheme.  Lastly, it's clear from watching the game on Sunday; the Ravens were jumping almost every Level-2 route Denver was running.  I'm not joking when I say it was almost as if the Ravens had two weeks to study Denver's tendencies and routes...oh wait, they did.

On a positive note, Denver continues to do an excellent job of not turning the ball over, despite the Moreno fumble on Sunday.   Even Orton cannibals have to admit the preseason worry of Orton throwing pick after pick is not going to happen.

Through Week 8, here are the rankings of the 32 teams in the four statistical categories: 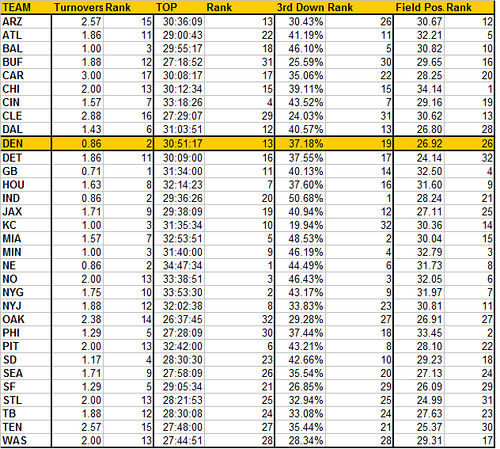 Notice how well-balanced teams like New England, Minnesota, and New Orleans are, ranking in single digits in all categories (except New Orleans in turnovers).  It should not be a surprise that these three teams are early favorites to go all the way.

Before getting into the Week 8 numbers, a few of the games are of note.  Of course, the Broncos-Ravens game is a classic statistical domination and a good example of what happens when you get beat in all four of these categories.  The Ravens' average starting field position in the game was the 40-yard line (with the return for TD, the 35 without).  You simply can't give anyone in this league that kind of field position and expect to win (perhaps the Raiders, but that's it).   Also, Baltimore was a massive 61% on 3rd downs.  Throw in the additional turnover, and it became a sackful of tainted candy for the Broncos.

Another game of note and interest was the Minnesota/Green Bay game, and not just for the obvious Favre homecoming.   Minnesota's average starting field position in the game was their own 46.33-yard line.  That's how you overcome two turnovers.  Field position just kills teams, whether they are at home or not.

Lastly, our lives would not be complete without talking about the Bears.  Cutler threw another red-zone pick in the game against Cleveland, but when the other team is 9% on 3rd downs and you start your drives (on average) at the 40-yard line, you'll do just fine in the NFL.  If only Jeff George had had such luck (draw your own conclusions).

Here are the Week 8 summaries:

2-Turnover Rule  (Turn it over more than once and you're going down, sucka!)

Here are the individual game stats from Week 8: 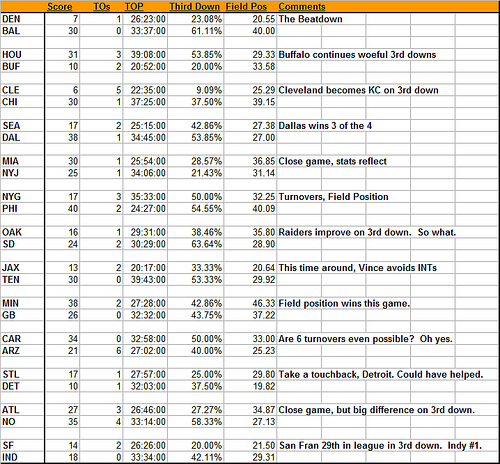 Looking ahead to Pittsburgh, here is how the two teams stack up in the four statistical categories (keeping in mind these are averages/game):

Given the significant correlation between the turnover battle and winning, you have to like Denver in this game. Pittsburgh just gives it up (on average) way too much.  Add in the fact that the home team wins about 60% of the time generally, this one certainly bodes well for Kyle (that's Mr. Orton if you're nasty) and the Hoodie.

Last Stat:  68.5% (percentage chance that Brian Dawkins can kill a Raiders fan just by staring at IT)