Happy Friday, friends.  We’ve gotten to Part 4 of the series about the Bartlett Defense, and unfortunately, I find myself a little handicapped.  The computer that can do my nice play graphics is still on a truck somewhere, so you’ll just have to roll with me as I do the best I can in that department.

Today, we come to concepts and rules for run defense.  If you’re just joining us, or want to refresh your memory, please see the following links:

Let’s start by leveraging some knowledge that most of us have about gaps and defensive line techniques.  There are some naming methodologies for this that are slightly different, and in fact, mine and TJ’s differ.  No way is wrong, but since I think the world revolves around me, we’re going to use mine.  Peep this graphic that I’ve used in the past:

The Edge is also really important, because it extends from the outside shoulder of the TE all the way to the sideline.  That’s a very big area, and the offense and defense are both determined to own it on every running play.  The team that wins the edge wins the running play, way more often than not. 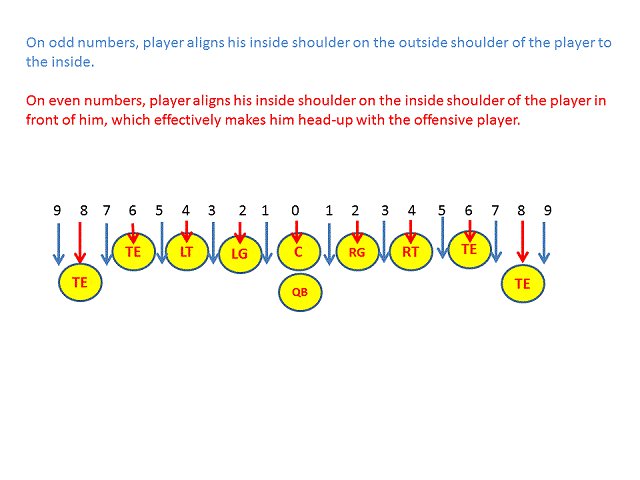 Odd-numbered techniques mean that a defensive player aligns in a gap, and it generally means that he’s responsible for penetrating and controlling that one gap.  When you hear about a 3-technique DT, that’s what it means.  When you hear a 3-4 DE called a 5-technique, that’s often technically wrong, because the guy usually will align as a 4-technique, for purposes of controlling both the B and C gaps on his side.

Now that we’re sufficiently refreshed on these concepts, let’s take a look at an alignment, and some gap responsibilities. 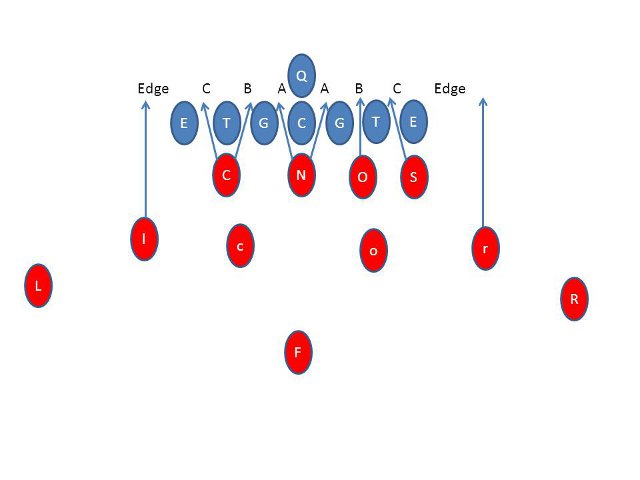 Obviously, the Closed-side DE and the Nose Tackle are tremendously important, because they’re both two-gapping.  What that specifically means is that they’re assigned to engage with the man in front of them and try to win a leverage battle, while being able to move laterally from that engaged position to fill the gaps on either side of them.  It’s a very difficult and thankless job, and guys who do it usually don’t get stats or go to Pro Bowls.  The benefit is that with two players, you can control four gaps, and that’s an enormous benefit.

Because you have these two power guys two-gapping, that leaves the two open-side linemen free to play one gap each, which is what they’re going to be best suited for.  Since we’re having the inside DBs handle the Edges (more on that momentarily), we’ve effectively left both LBs free to run to the football, without worrying about a specific gap responsibility.  That’s what the Steelers have been doing for 25 years with their two inside guys, and that’s what we’re doing too.

Now, the rub is that you need those two hybrid inside DBs to be very good run players, who can miss some blocks.  When you think of a guy setting the edge effectively, you tend to think of a player like LaMarr Woodley or Jarret Johnson engaging with a blocker, winning what amounts to a wrestling match, and forcing the run play inside.  When you’re using smaller players, you don’t want the wrestling match – you want them to be able to dodge a blocker, and buzz hard into the flow of the play to turn it inside.

If you can control eight gaps with six assigned players, and leave two LBs free to run to the ball, you’re going to have a lot of success stopping the run.  The three deeper DBs are backup players, and aren’t expected to get into the box area on run plays.  They’ll help clean up on tackles, but we’d rather them not be the primary tacklers, because if they are, it will be happening downfield.

This may be my shortest article ever in four years, but there’s nothing too creative going on here with run defense.  We’re borrowing the concept using both two-gap (closed-side) and one-gap (open side) concepts on the same play from the Patriots, and we’re applying the general concept of highly prioritizing the cleanliness of both ILBs from the Steelers.

Where this is going to get interesting and original is in Part 5, when we start talking about coverage concepts.  Since I still have nothing in my home to sit on or do, I’ll probably spend a few hours in the library this weekend, banging out a long article.  At least they have chairs, right?  See you Tuesday, friends.