Hello again, friends, and Happy Friday.  I’m back with some stuff about 30 fronts today, on the heels of my last post about 40 fronts. 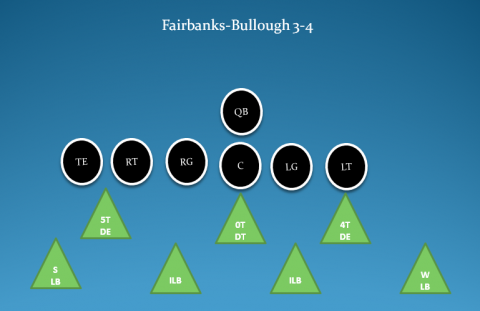 I’m not that much of a football historian, really, but occasionally you get to listen some old-timer talk about the game, and you learn a lot.  I heard Hank Bullough talking defense on Sirius NFL Radio, maybe 3 or 4 weeks ago, and it was one of those times.  (The Fairbanks is Chuck Fairbanks, incidentally.)  Bullough was the defensive coordinator for the Patriots in the 70s, and Fairbanks was the Head Coach.  Together, they introduced the 3-4 to the NFL, which turned out to be a pretty enormous contribution, on par with Bill Walsh inventing what came to be known as the West Coast offense, or Sid Gillman bringing a vertical passing scheme to the NFL.  Bullough’s knowledge was very rich, and he’s lost absolutely nothing on his fastball at 76 years old.  He knows today’s NFL like he is currently working in it, and he’s been retired for a long time.

The Fairbanks-Bullough 3-4 is the most common version, and it’s a two-gap scheme.  The defensive linemen are expected to occupy blockers more than anything, and you’d like your three to take up all five offensive linemen, if possible.  As with the DTs in the traditional 4-3, the NT and two DEs are going to engage with the linemen who are across from them, and then play into whichever of their two gaps is in the direction of a running play.

I mentioned in the 40 front post how dumb MSM people like to universally call 30 front defensive ends “5-techniques.”  The main reason why it’s stupid, other than the fact that those people don’t know what “technique” means, is that 30 front DEs often line up in a 4-technique, or head-up on the OT.  That allows them to engage most easily, and move in either direction with equal ease.  If a DE is in a 5-technique position, he’s on the OT’s outside shoulder, and that makes it easier for the OT to push him outside, if a run play is going to the B-gap.  Peep this, and you’ll see what I mean. 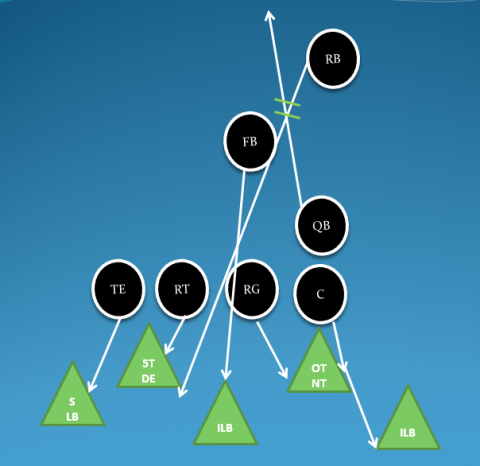 If the DE is walled off in the C-gap, and the play is an Iso to the B-gap, the Fullback has a clean shot on the filling ILB, and the RB has a good chance to gain a lot of yards.  (This may be elementary for some, but an Iso is a basic run play in which a defender, typically a playside LB, is left free by the O-line, and the FB is assigned to block him in the hole, with the RB cutting off of that block.)  If the DE had managed to get into the B-gap, the play had a much lower success rate.  Suddenly that FB is running into a lot of traffic, and that LB is much cleaner to make a play in the hole.

In terms of run-fits, the Fairbanks-Bullough 3-4 tries to account for 8 fits with 7 men, like any scheme.  Unlike a Tampa-2, which typically leaves two outside lanes to one player (the Will LB), the 3-4 leaves both A gaps to the Nose Tackle.  The B and C gaps are manned by some combination of ILBs and DEs, depending on what the DEs do, and the edges are manned by the OLBs.  The fact that the NT is responsible for two lanes is the reason that he’s typically called the key player in a 30-front.

From a pass-rush perspective, you can do a lot of interesting things with this scheme.  The Steelers like to zone-blitz out of it a lot, dropping DEs into zone coverage, and blitzing different combinations of LBs and DBs.  Other teams, like the Patriots and Packers, tend to get their pressure with less exotic blitzing, using their OLBs a lot.  A big trend the last few years has been a lot of double A-gap pressure schemes, which put a lot of pressure on the Center and Guards.

Teams which are expected to run this kind of scheme in 2010 include New England, Pittsburgh, Buffalo, Miami, Cleveland, Kansas City, and Green Bay.  Bill Belichick, Dick Lebeau, Mike Nolan, Eric Mangini, Romeo Crennel, and Dom Capers all learned this defense from Fairbanks or Bullough, or their direct descendants, like Red Miller and Joe Collier of the 1970s Broncos.  The key take-away from this is that, despite how teams like the Steelers are portrayed, this is an inherently less aggressive and more reactive approach to run defense than other schemes. 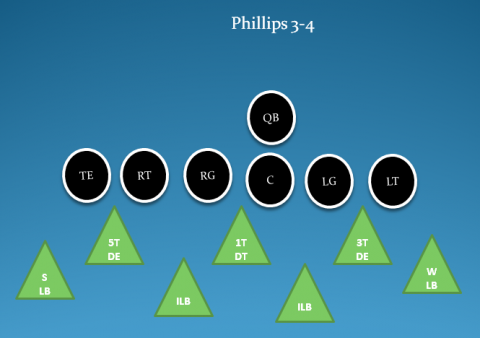 My boss lives in Dallas, and I was out drinking with he and some other co-workers once when he visited Cleveland, and I got to talking about the differences between 3-4′s.  I was probably showing off a little, but I mentioned the Phillps 3-4, and how a player like Jay Ratliff was emblematic of the difference, in that he’s a leaner, more athletic guy, who’s well-suited to attack one gap.

My boss asked if the defense was named after Wade Phillips, which was a good instinct.  It’s actually named after his father, Bum, who invented it.  (Wade has a great Twitter name, incidentally, @sonofbum.)

The Phillips 3-4 is a one-gap scheme, much like the Tampa-2 is a one-gap scheme.  It’s inherently aggressive in the running game, and the defensive players almost always line up in odd-number techniques, meaning in gaps, rather than head-up on a lineman.  In my diagram of a typical Fairbanks-Bullough alignment, the weakside DE was in a 4-technique, which is fairly common, when you’re trying to engage a lineman.

In this version of the 3-4, the players are trying to minimize their engagement with offensive linemen, and penetrate into assigned gaps.  As with the Tampa-2, in this look, the nominally free lane is the left edge.  You’re asking the Will LB, once again, to play the C gap and that edge.  Once again, he’ll favor the edge, because his pursuit is coming from inside, but he can jump the C gap too, if he judges it to be the right place to go.

The only teams which heavily employ this style of 3-4 are Wade Phillips’ last team, the Chargers, and current team, the Cowboys.  The limited usage is offset by the fact that its concepts are quite prevalent in a lot of hybrid schemes, which will be discussed in a near-future post.

As always, thanks for checking us out.  We’ll see you later this weekend, as I’ll have some thoughts and comments about the first full weekend of preseason play.

Originally posted at One Man Football