A Second Helping of Peyton Manning’s three interceptions in Atlanta

Happy Thursday, friends.  The All-22 film was made available yesterday, and I had occasion to review the Falcons game.  I saw a lot of positive things to feel good about, but for today, I’m going to focus on some negative things.

Peyton Manning threw three interceptions in the first quarter, and that put the Broncos in a very tough position.  They nearly rallied to win the game, nut ultimately fell short.

I’ve reviewed the three plays repeatedly, and there are three general reasons why the interceptions occurred:

1.  Mike Nolan is a good defensive coordinator, and the Falcons disguised their coverages well.

2.  The Falcons have a very underrated pair of safeties in William Moore and Thomas DeCoud.  Each is among the top ten players in the NFL at his position.

3.  Manning’s mental game hasn’t been perfect.  He may have some rust there that needs to be overcome.

I do not buy for a second that the problems are physical.  Manning can still throw the ball with plenty of zip when he needs to, but throws to the seam tend to be touch throws over a trailing underneath defender.  Even if Manning could sling it like Jay Cutler or Matthew Stafford, he wouldn’t be throwing the fastball on those throws.

Plain and simple, one of Manning’s three interceptions was a bad decision where he got fooled, and the other two were cases of him staring down the inside receiver, and not keeping nearby zone defenders honest.  We’re going to look at all three plays today and work to understand what’s really going on.

The Broncos are in 11 personnel, slot to the right, and Manning is in the shotgun.  Pre-snap, Manning sees base defense and eight men in the box, as you see from the numbers I added to the screenshot.  This indicates that the Falcons want to sell out to stop the run.  I suspect that Manning read the defense as Cover 3, given the CBs playing with their backs to the sidelines. 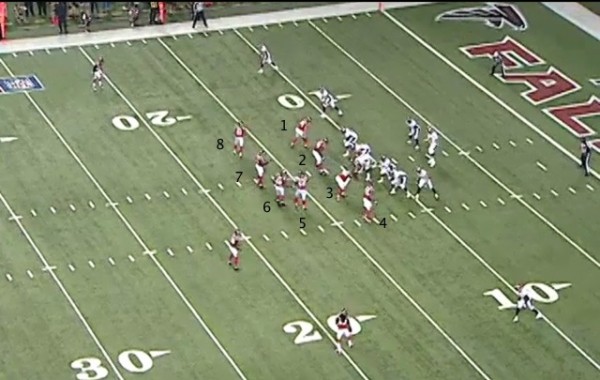 Here’s another view, and you can see that SS William Moore (25) is the eighth man in the box.  He’s the key to this play, and the guy who’s ultimately going to intercept the ball. 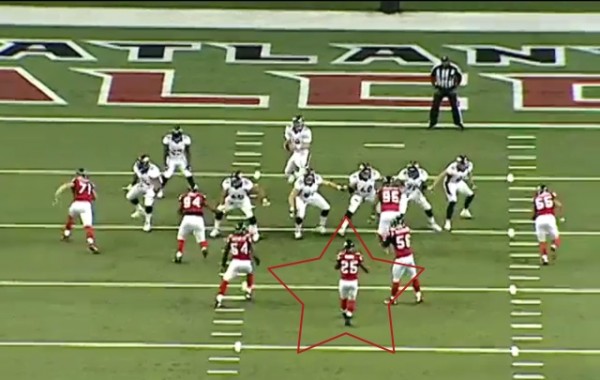 Just post-snap, you see the offense running three verticals against what Manning thinks is Cover 3, but Moore is bailing out quickly in the middle of the field, as you see.  The video quality of NFL.com wasn’t real good last night, but you can see that Brandon Stokley has his underneath guy beaten badly, and if Manning can drop in the throw to him, like he has hundreds of times in his career, it’s a big completion. 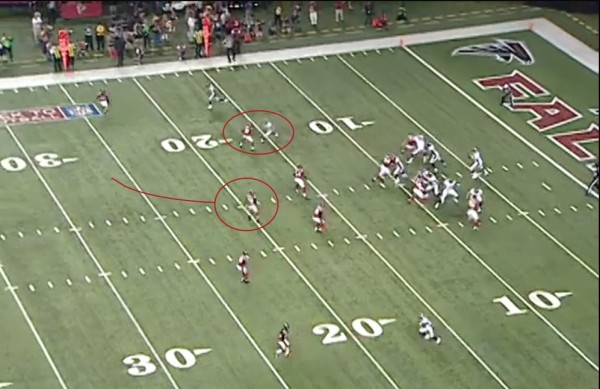 The problem is that this isn’t Cover 3; it’s Cover 4.  Moore has made his way back into a deep quarter, and Manning appears not to have caught onto that as he watches Stokley work the seam.  Moore can see Manning looking that way, and he easily makes the short run to the seam to undercut the route and intercept the ball.

What Moore did there was play like the Steelers use Troy Polamalu.  He started at the line of scrimmage, and dropped back into quarters when he diagnosed pass.  Not every safety can make that play, and I don’t remember the Falcons showing this look against the Chiefs in Week 1.  Quite simply, the throw was going to be fine if it were Cover 3, but Nolan and Moore got Manning by tricking him. 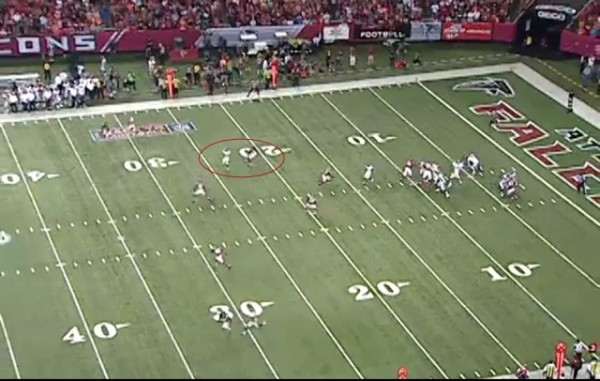 The Broncos are in the same grouping here - 11 personnel - but a different alignment.  In the first play, they were 2 by 2, and here, it’s 3 by 1, with the trio to the right side.  The Falcons are showing a two-deep shell, and the Sam LB is walked out to split the difference between Stokley and Joel Dreessen.  The CBs are playing way off. 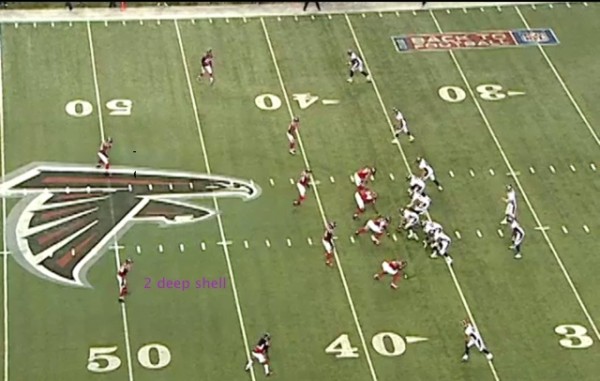 At the snap, we see zone technique across the board, with the Mike and the Will moving forward on the play-fake to Willis McGahee.  That’s going to create good space between them and the safeties on the in-cut for Eric Decker, at the bottom of the picture. 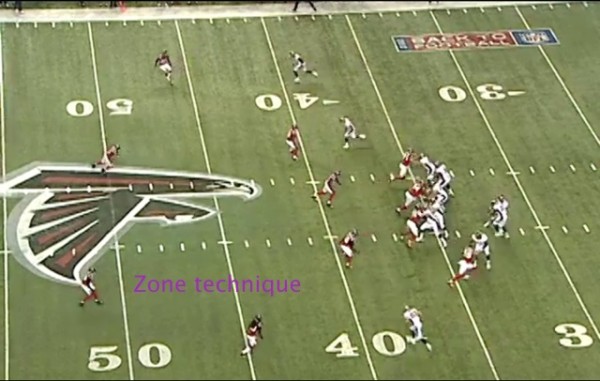 As we see here, Decker has made his in-cut and he’s wide open.  The FS DeCoud is ten yards behind him, but he’s watching Manning’s eyes.  Again, Manning is staring down Stokley in the slot.  The correct play would be to go to Decker here, but Manning sees Stokley as having beaten the underneath coverage - with the deep-half guy honoring Demaryius Thomas’s vertical route - and he goes to Stokley. 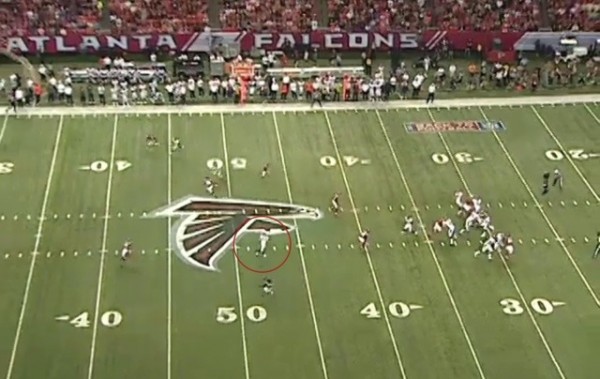 Because DeCoud is watching Manning’s eyes - and because Manning never does anything to move him - DeCoud’s going to simply come from watching the other half of the field (from the hashmark, so it’s not a terribly far run) and undercut the throw. 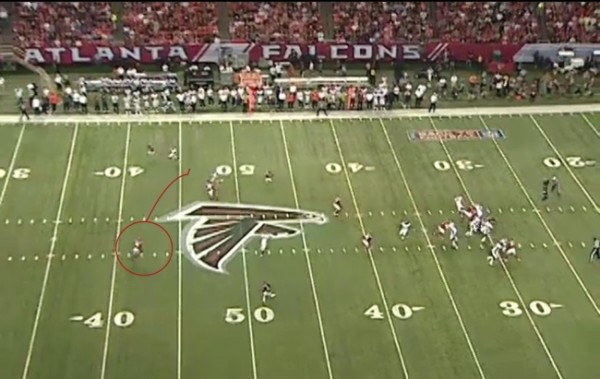 Here, we see 12 personnel again; 3 by 1 to the right, and again from the shotgun.  This time, there’s a double slot look.  The defense is obviously going to be in zone, since the CB at the bottom of the screen stays on that side, not following the WR to the top of the screen.  The CB at the top is playing way off, and leaning like he wants to bail quickly. 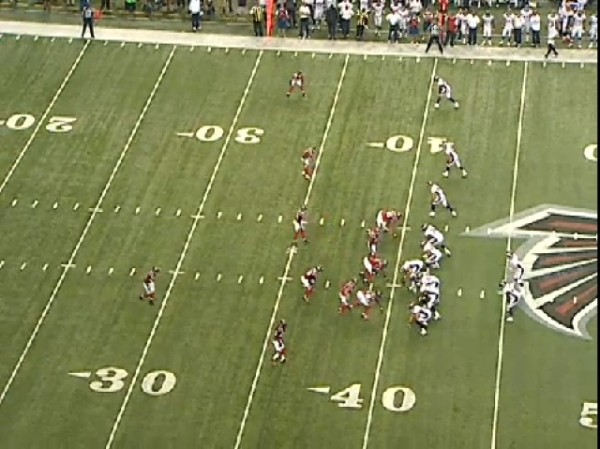 That CB does bail really quickly, as we see, and it’s going to be Cover 3, which the Falcons run frequently.  Manning again wants Stokley, and you see him here post-snap, eating up the cushion on the underneath defender quickly.  The offensive play is three verticals to the top of the screen, and an underneath crosser to the bottom. 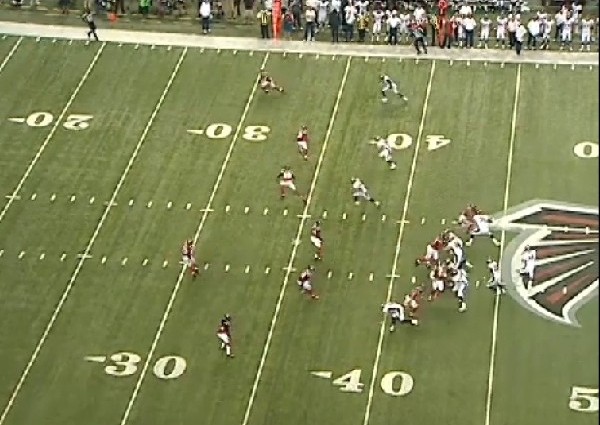 At the 25-yard line, you see the outside deep defender, CB Robert McClain has split the difference between Stokley and Thomas running their vertical routes.  Manning again locks onto Stokley, which allows McClain to drift inside, and intercept the ball. 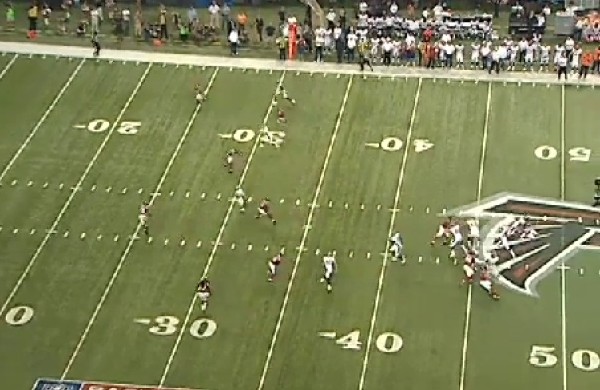 The thing for Manning to do here is to at least look outside to Thomas, or better yet, to pump fake that way.  The Manning of old was awesome at manipulating defenses with his eyes, and it seems like he’s not fully back yet, on that part of his game. 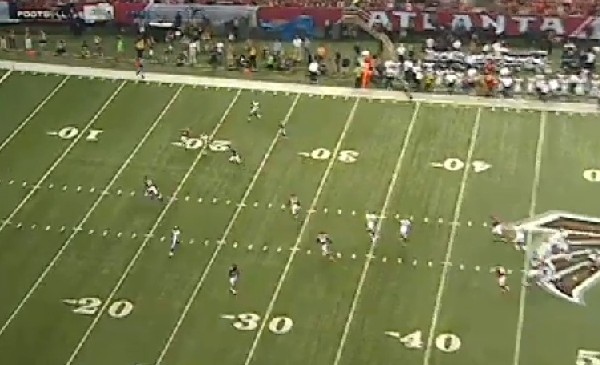 Here’s the deal – no old QB can throw the ball as well as he did when he was 24.  Manning has never had a “laser rocket arm,” what he said in commercials notwithstanding, and he always has thrown a somewhat wobbly ball.  We’re all new to having him as our QB, so our ability to compare him to past years isn’t as good as that of somebody who’s watched every snap of every Colts game for ten years.

There are subtle things that great QBs do when they have everything working, and Manning hasn’t gotten fully into form with them yet.  The issue isn’t his throwing, it’s his overall process; he’s missing slightly on some of the subtle things that combined to make him so effective.

I would compare Manning to Tiger Woods, and remember that it took Tiger a significant amount of time to get back into top form, as he struggled to get all the little inputs right that made him such a dominant golfer for so long.  Tiger looks good now, and it just took some time.

If anything, I think Manning has had a less significant dropoff from his hiatus than Woods did, and I think that the little things are going to get back in order quickly.  I guarantee you that Manning is spending a lot of time this week thinking about looking off zone defenders, and that we’re not going to see continuing problems in that area.