Mailbag: What do the Broncos do to beat Cover 2, press man?

Hey there, Broncos fans. We got an email yesterday from one of our readers by the name of Dave Traveller. Here was Dave's question, or a series of questions, actually:

So, if the formula for beating the Broncos offense is press coverage with 2 high safeties, then what is the technical strategic response to that defense? Seems like running the ball up the middle. Montee Ball time? Also, do the Broncos have the personnel to beat press coverage? Do you think the wide receivers can adjust and adapt? Where is [Demaryius] Thomas? If he is this big athletic receiver... why isn't he ever open?

These are all good questions, so let's deal with them one by one.

Before we do, however, let's review the reasons teams want to employ a Cover-2 man under strategy against the Broncos:

For all these reasons, Cover-2 man under is a tough defense to beat, especially if you have a plethora of cover guys, and you feel comfortable that your extra DB or LB can handle the tight end (more on this in a moment). In fact, this describes the Denver Broncos defense. They should play it a lot more often than they do.

Even without Champ Bailey, the Broncos should be confident putting up the likes of Dominique Rodgers-Cromartie, Chris Harris, Kayvon Webster, Tony Carter, Danny Trevathan, and Wesley Woodyard up against any team. Notice I didn't throw in Von Miller's name. That's because I never want to see Von Miller in coverage. If he's not attacking the quarterback, he's giving the other team a chance.

But this isn't about the Broncos defense, it's about their offense--namely, what the hell should they do when the next team tries to press them while employing Cover-2 behind the coverage? There are many ways to attack this coverage, some of which we saw the Broncos do already, some of which they should consider. No matter what they do, though, the two things to keep in mind philosophically are: cross and isolate defenders.

It's just not that easy to time these routes when your receivers are getting pushed at the line of scrimmage. That's why the biggest weakness of a Cover-2 (the second level--deep and to the outside) is so damn hard to attack. It takes extra time and a line that can buy you three seconds--something the Broncos have been struggling with the last two games.

So the takeaway from all of this is execution. It's not as if the Broncos weren't running the appropriate route combinations to beat Cover-2 press man--Manning has seen this strategy used against him dozens of times over throughout his career. It's the execution of the routes and the blocking.

This means, of course, the wide receivers need to get separation and be able to beat man coverage. We saw spurts of this with all of Manning's targets in the game on Sunday. Decker had a long gain (and a nice fade route) against tight press coverage early in the game, and Welker ran a great speed out late in the third quarter. So the strategy is sound. It's more about consistency and winning the one-on-one matchups.

Peyton Manning also needs to stop underthrowing the ball. As much as we want to place the blame at the feet of Manning's targets, the truth is that Manning was not throwing it well on Sunday. Demaryius needs the ball out in front of him so he can get separation on the long fade down the field.

Additionally, and this is not going to come a a surprise, the line needs to play better. I thought Chris Clark and Louis Vasquez actually stood up pretty well (Robert Mathis is a beast), but that the Colts ended up getting too much pressure up the middle, which really is a Chris Kuper issue.

I'm not sure what you do to fix that until Orlando Franklin gets back, though, because Vasquez is currently the best option at right tackle. Let's hope it's a moot issue, and Franklin gets back this week. Otherwise, Knowshon Moreno is going to be stuck as an extra pass blocker constantly--the not-so-great solution.

The keys to making all of this moot, though, are Welker and Julius Thomas. The reason? They present the toughest matchup problems for any team. We've talked about this before, but it's worth repeating again: Man coverage is only as good as the weakest link in the chain. And for the Broncos, Julius Thomas and Welker will always expose the opponent's weak spot. Take a look at this still from Sunday's game, for example: 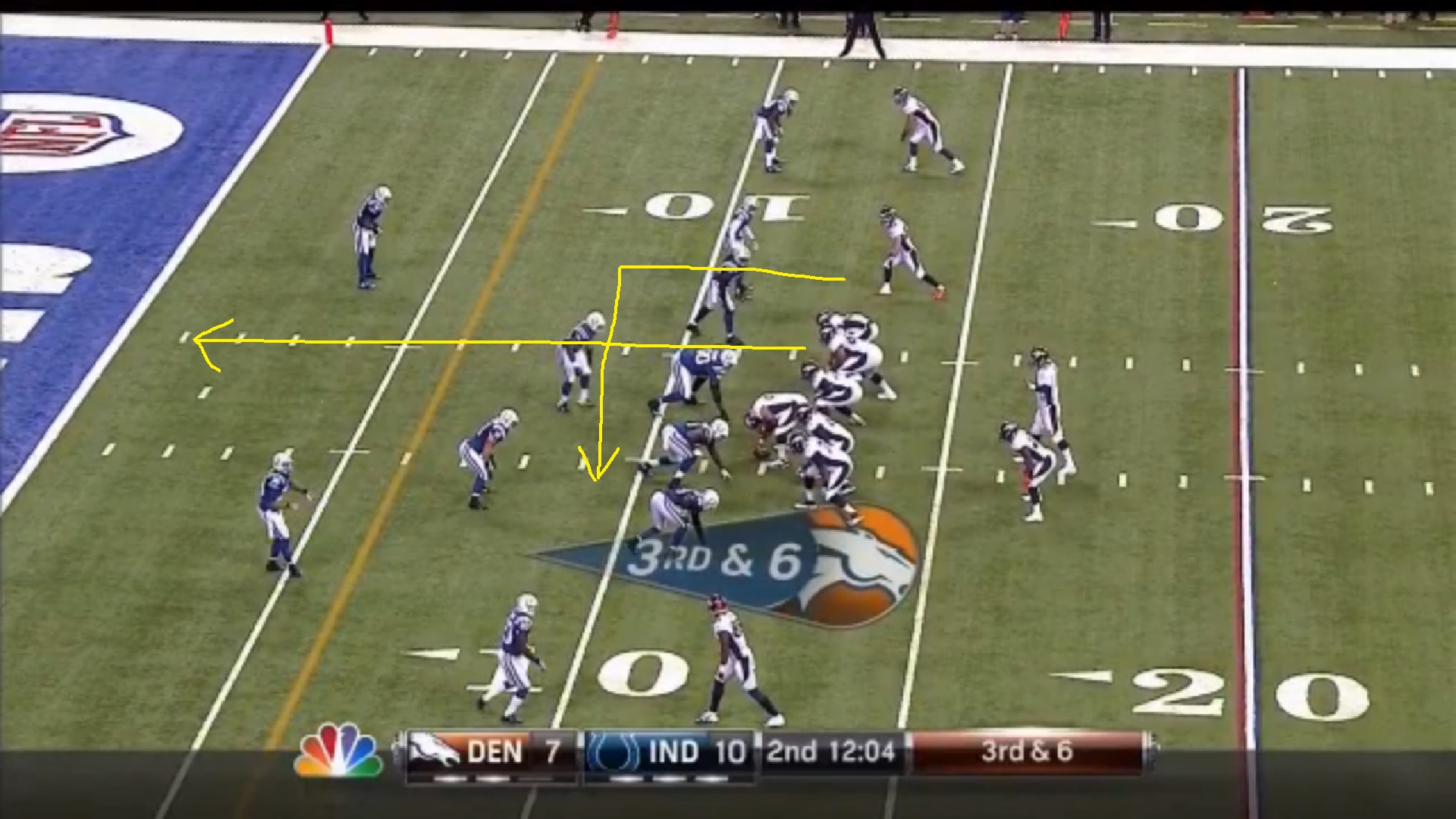 Notice the problem for the Colts: Julius Thomas is on a linebacker with a safety behind him. This play ended up being a touchdown for the Broncos as Thomas simply pushed upfield while Welker isolated and crossed over the middle. This is the type of route combination that both philosophically (isolate and cross) attacks the Cover-2 man under, but does it with Denver's two best matchup terrors.

Julius Thomas will be a matchup problem for any team--yes, like Antonio Gates. He can out-body any DB, and linebackers are a joke trying to tail him. If I'm Manning and the Broncos, I look to exploit any situation in which Thomas isn't bracketed. Further, I'd take advantage of Welker in the route combination, because of all of the Broncos wideouts, he is the best (in theory) in getting the separation needed for the underneath routes.

Once the opponent adjusts, then Manning can take his shots downfield with Decker and Demaryius Thomas, attacking the Cover 2's other weakness: the deep out or fade (assuming the safety is occupied in the middle by Julius Thomas, of course).

Can Decker and Thomas deliver? Of course. They've done it before (hell, they even did it during the game in question). It's just a matter of focus and beating the Julius Thomas/Welker drum until the defense adjusts.

Regarding the running game, it's just a matter of execution. Manning is making those audibles to running plays when he sees two safeties back, but the Broncos have to block it. Unfortunately, and I don't mean to pick on the interior of the line again, but Beadles, Ramirez, and Kuper have to do better. Their perfomance against the Colts was pretty damn average. Again, getting Vasquez back to guard (a position in which he his top-five in the NFL) will work wonders. And we already know Orlando Franklin can move buildings with a single forearm.

Keep the faith, Broncos fans.  Things are not insurmountable.