It’s the matchups, stupid!  Thoughts on the destruction of the San Diego Chargers

It's been said many times that quarterbacks like Tom Brady and Peyton Manning are great because they can see things in the defense that others can't; that they have some innate ability that's just missing in quarterbacks like Tony Romo or Andy Dalton.

Of course, much of that is true. Manning can spot a leveraged linebacker a mile away, mostly because linebackers are stupid and often give away their intentions due to their aggressive nature. But that's beside the point, really. Each week, we have analysts break down the intricacies of Cover 1 vs. Cover 2, man-press coverage vs. zone, and everything in between.

But sometimes it's simpler than you think. Sometimes it’s just a matter of finding the weakest kid on the playground.

Well, that's not quite true. So I'll rephrase it: they exploit the living hell out of matchups.

There is a reason Peyton Manning seems to have a sixth sense on the football field. It's because he studies enough film to know where he's got advantages and under what scenarios he can press them in order to move the chains.

If you're still not convinced, let me provide a few examples. In Week 11, Peyton Manning targeted Chiefs cornerback Marcus Cooper thirteen times. In Week 13, he went after Cooper another eleven times. Manning would later say that he doesn't targets specific defensive backs; he just looks for the open receiver. Of course, we know that's just Manning not trying to show up another player. I assure you in the film room, he was licking his chops at the idea of throwing Cooper's way.

Here's another example. In Week 3, Manning went after Raiders middle linebacker Nick Roach seven times. In Week 17, the Broncos attacked Roach another six times. It would have been a lot more, too, if Manning had played in the second half and didn't have another easy target to go after in cornerback Chimdi Chekwa, which he didn't in the Week 3 meeting.

I used to watch the film on Manning differently. I used to watch the entire defensive backfield to try and spot man vs. zone, Cover 1 vs Cover 2, which side of the field the safety was cheating toward, etc. I used to try and guess what Manning was seeing before the play and try to spot the weakness. My odds of guessing right improved significantly when I began to focus on recognizing the other team's personnel weaknesses.

This brings me (finally) to my real topic, which is the Broncos' first opponent of the playoffs, the San Diego Chargers. The Chargers have a huge matchup disadvantage with their left cornerback Shareece Wright. One might even argue Wright is the weak link in the Chargers secondary. In Week 1, Matt Schaub targeted Wright seven times with Andre Johnson alone.

In Week 12, even Alex Smith and the Chiefs put up 38 points against San Diego by targeting Wright ten times, five times with Dexter McCluster alone. This means, of course, the Chiefs went way out of their way to split McCluster wide right just for the pleasure of attacking Wright.

You probably know where I'm going with this by now. Peyton Manning breaks down an ungodly amount of tape and he knows what we're now aware of: attack Wright with your best receiver and let the fun begin. That's why in their Week 10 matchup, Manning targeted Wright eleven times—ten times with Demaryius Thomas. And it worked, too, until the second half - when the Chargers started giving Wright more safety help.

In the Week 15 rematch, Manning didn't alter the strategy much. He threw at Wright eight times, most often with the likes of Andre Caldwell. Yet the rematch didn't go the Broncos' way. There were many who simply believe that Wright played better. In fact, his grade from the two matchups, according to Pro Football Focus, went from a negative to a positive. Is this really possible?

While Wright did have a better game, I wouldn't attribute as much of this to his own doing. To the contrary, the Broncos didn't execute when they should have against Wright. Here's a perfect example, facing a 1st-and-10 from the Chargers 31-yard line: 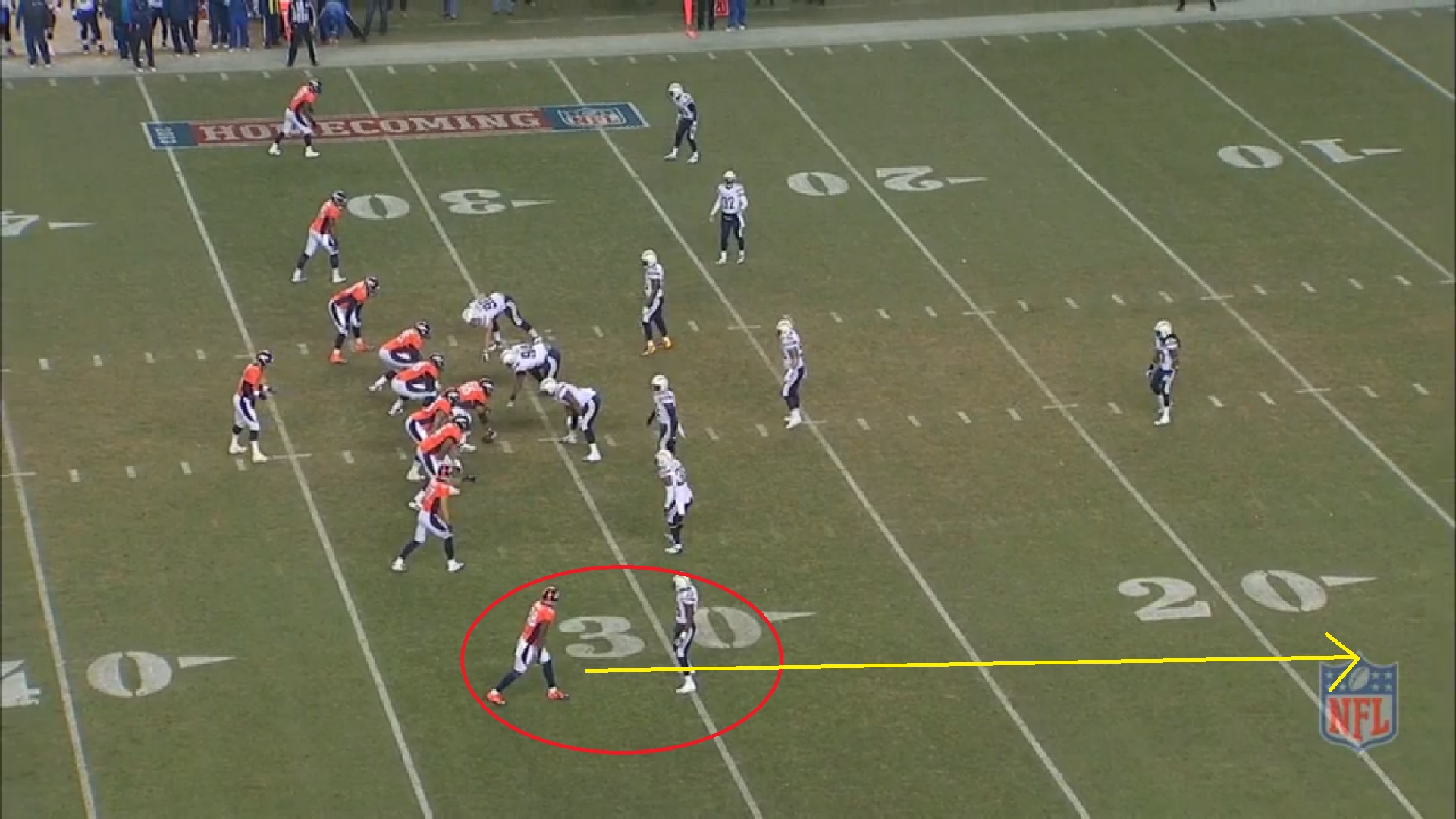 Now, Chris Burke will have you believe the Chargers primarily played soft Cover 2, off-man coverage all game. That's not quite true. The Chargers provided plenty of looks like the one above, in which they showed Cover 1, press man on the weak side of the field.

Now imagine the size of Manning's pupils when he sees this coverage: Shareece Wright in press coverage against their best receiver. It is an automatic call—go deep to Demaryius Thomas and let him make a play. Even with the safety cheating over to Wright's side, he won't have enough time to give Wright even a modicum of help. On paper, this play is a surefire touchdown.

Only, the Broncos fail to execute. Thomas has a step on Wright, but Manning throws the ball too far to the outside and overshoots Thomas. It is a missed opportunity.

Let's look at another example. This time, the Broncos face a 3rd-and-11 from their own nine-yard line. Here's what Manning sees in his pre-snap read: 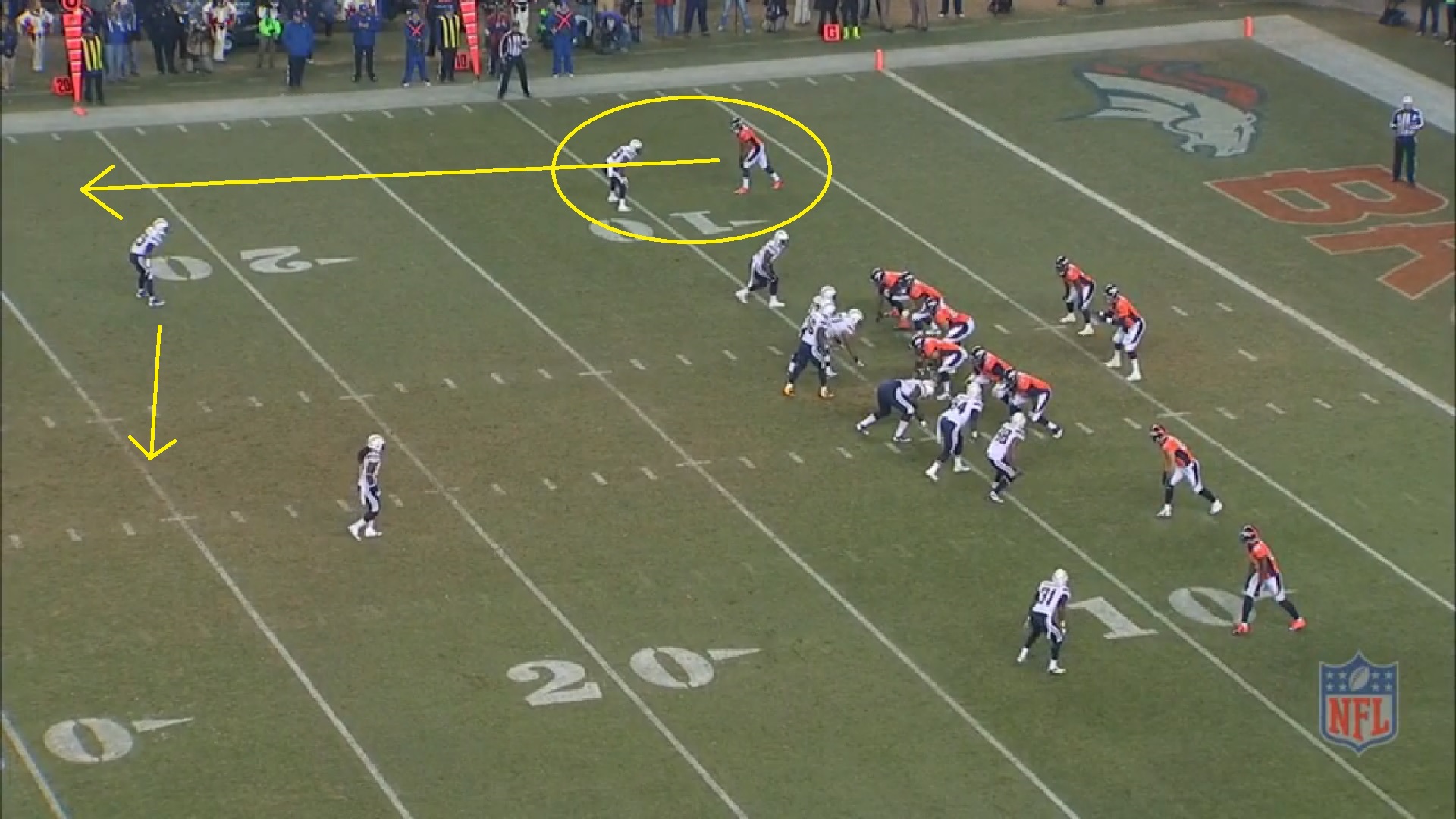 Notice the Chargers appear to be playing Cover 2, press man—once again throwing serious doubt on the assertion that the Chargers are sitting back in a soft shell all game. But that's hardly the point. The main point: our good friend Shareece Wright is vulnerable. He's again the guy in press coverage. And we are collectively licking our chops.

Manning sees this, and at first, you'd think he wouldn't go in that direction because the safety is cheating to Wright's side heavily, giving the impression that he's over the top of the man coverage. But Manning's not fooled that easily. He's seen this sort of rotational coverage many times. It's actually a disguise. Manning knows from his pre-snap read that the safety will rotate to Cover 1 and thus leave Wright exposed in his man coverage. Just how does he know this?

A quick digression should suffice as an explanation. First, notice Wright's body position compared to the right cornerback's. It's a surefire giveaway that he's in man coverage, using the sideline as a boundary. In other words, he's not expecting any safety help at all; the boundary is his help.

The right cornerback is positioned differently, at a 45-degree angle, a sure sign of zone coverage. His goal is to encourage (or funnel) the wideout to the middle of the field and into the teeth of the zone of the safety.

So at this point (pre-snap), Manning has a good idea that the coverage is a disguise. As he takes his drop, he reads the safety to Wright's side. As the safety rotates to the middle, Manning's mind is made up: he's going to press his personnel matchup and burn Wright. Once again, on paper, this should be a huge play.

Once again, it doesn't happen. The ball is underthrown, and Caldwell is neither a speed merchant nor a giant leaper. Wright bats the ball down, and the Broncos go three-and-out. The boys over at PFF probably gave Wright a positive grade on the play, and rightly so—he did his job. But we know differently. The Broncos did not execute.

One final example will make you want to puke. Here, in the third quarter, the Broncos face a 2nd-and-5 at the Chargers 30-yard line: 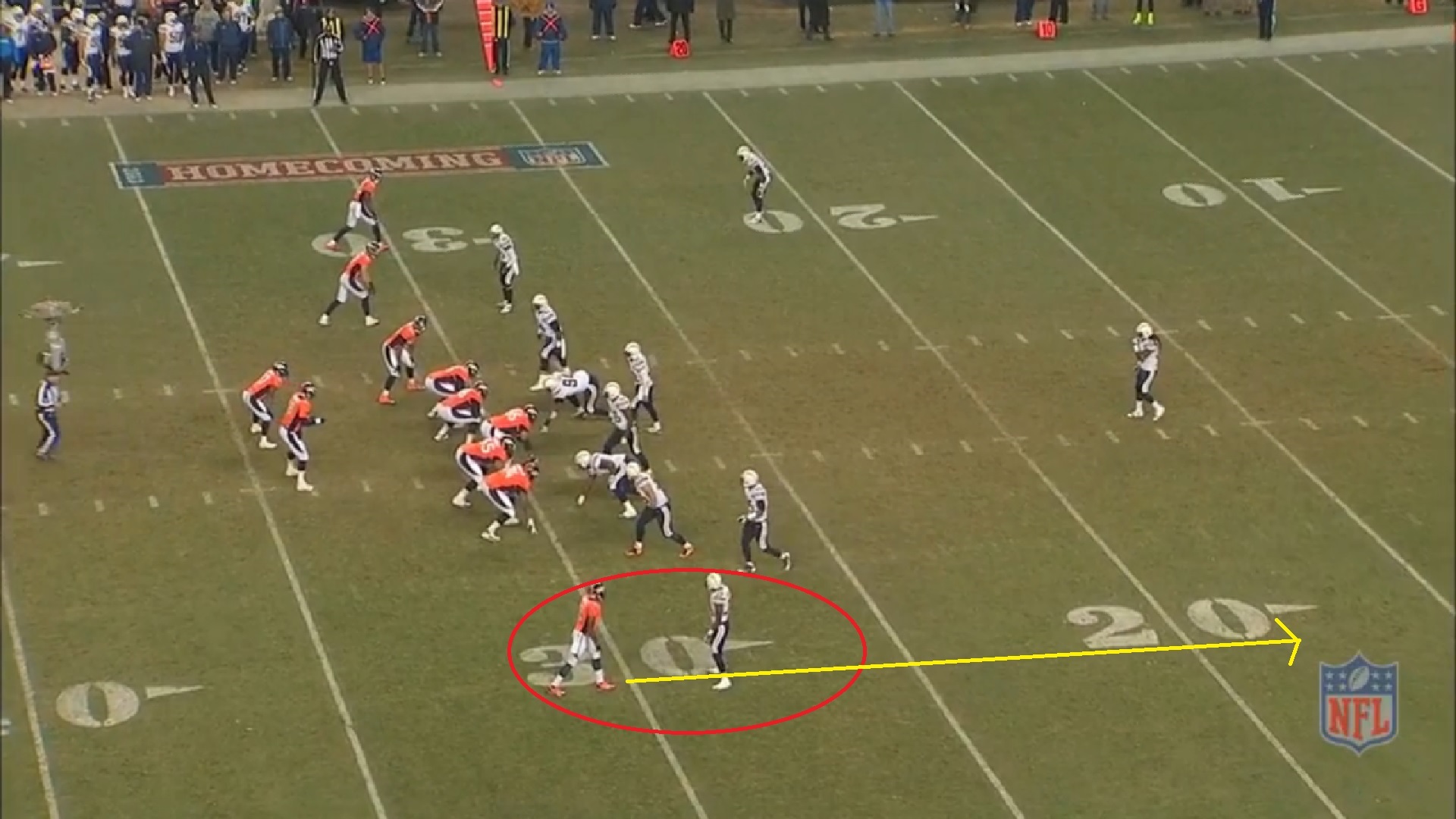 This defensive alignment, as least in my view, cries out in agony for torching our buddy Wright. Andre Caldwell has him exactly where the Broncos want him, which is in press man coverage without much safety help.

It's clear from the film that the call is a pass play, but shockingly, Manning audibles to a run off left tackle. I'm not exactly sure why, but it appears as though the blitz from the right side of the line of scrimmage gives Manning the idea that a run to the left side will be a big gainer.

The result? No gain. To make matter worse, Caldwell runs the route perfectly, juking Wright out of his uniform and getting open (he still thought it was a pass play). It would have been a big gain for the Broncos had Manning stuck with the call.

To be fair to Burke, the Chargers did retreat into a Cover 2 shell during most of the second half, but not because it was their game plan all along. They were simply up by two scores; it was the prudent thing to do to make Manning earn everything through short gains, thus draining precious time off the clock. By that time, it was too late.

A few other things worth noting, all of which affected the Broncos' ability to score:

In the end, I expect the Broncos to prevail in a big way. That's because the game will come down to Peyton Manning taking advantage of Shareece Wright. The Broncos are going to line up and run either Eric Decker or Demaryius Thomas at Wright, and I think they make some big plays against him off of play action, much the same way they did against the Chiefs in Week 13.

And when the Chargers adjust, I expect the Broncos to utilize crossing route combinations with Julius Thomas and Wes Welker over the middle of the field. It won't matter whether the Broncos have a huge day on the ground. The threat of a running game is more important than the actual running of the ball.

On defense, which is always the biggest concern, I simply don't feel panic. This game won't be like Week 15, in which the Chargers had the luxury of keeping the ball on the ground; not that I expect a lot out of them given the way Mincey and Williams are now playing.

Rivers is going to have to keep pace with Manning, and Webster isn't going to be as naked as he was the last time around. Certainly Rivers will throw for some yardage, but Jack Del Rio will have the flexibility to sit back and force Rivers into some bad throws. Finally, Champ Bailey is going to have something to say about the outcome of this game. He's not done yet.