Today's game was the sort of contest previous Broncos teams would have lost. 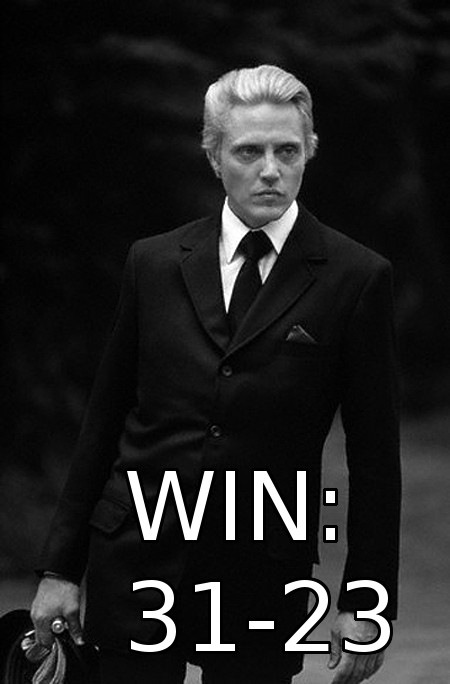 There they were--on the road, starting early, serving up two critical interceptions, and running the ball as sluggishly as they have all year.

Instead, they were ahead by two scores with a few minutes remaining.  I guess having Christopher Walken Peyton Manning at quarterback has something to do with it.

That's an effort you'd expect from a top-flight team and a division champion.

We'll see.  Suffice to say, things are beginning to feel a lot different in Denver this year.

1. You'll never see a better call than the Broncos' first touchdown.  In a nutshell, Demaryius Thomas picked/cleared/rubbed out two Bengals defenders in order to make way for an out route by Eric Decker.  Whatever terminology you use, you can't argue with the result.  Speaking of Decker, he was as Charles Bronson as he's ever been.

2. Chris Harris may do a lot of things, but one of the things he won't be doing anytime soon is giving back the starting cornerback spot opposite Champ Bailey.  If technique and leverage were a disease, consider him infected.  It's rare to see Harris yield any separation.

3. Wesley Woodyard picked up where he left off.  He's a perfect example of what happens when a guy gets a chance to play, gains a little confidence, and begins to act like the guy he thinks he is.  On the day, Woodyard had 14 total tackles, and he's had 49 over the past four games.

4. For those of you who disagreed with my take on the Broncos acquiring Trindon Holliday, you can credit my genius in the comments below.  Or you can just wait until Holliday fumbles and criticize my stupidity. Or perhaps just wait until he doesn't pick up the ball at the one-yard line.

5. Despite what John Clayton says, I agree with our own Ted Bartlett, who mentioned to me in our in-game chat the value of deferring the opening kickoff.  I think the point is particularly true for a team like the Broncos, who have been excellent with their hafltime adjustments.

6. Von Miller had three sacks today.  The first was on a twist.  The second was a coverage sack.  The third?  Lawrence Taylor couldn't have done any better.

8. If the Bengals have a strength, it's their front four.  Fortunately, for the Broncos, their offensive line is equally as strong.  Peyton Manning rarely felt pressured today, and in fact, didn't take a single sack.  Part of this is due to Manning, but there's no doubt Ryan Clady is playing great and Orlando Franklin is quickly making people like me look silly for suggesting he should have been moved to guard.

9. Demaryius Thomas made a lot of big plays on the outside today, but his biggest work was over the middle of the field.  Part of the Broncos' success over the middle was due to the fact that the Bengals were forced to play two Mike Linebackers (Rey Maualuga and Vontaze Birfuct) in their nickel package.  That had Peyton Manning licking his chops; further, it made the Bengals weak against crossing routes in zone.

10. Brandon Stokley may be old, but he's still as quick as ever; further, he's about as heady as it comes.   His conversion on third-and-six in the fourth quarter that helped put the Broncos up by two scores was priceless.

1. Penalties and dropped passes kill drives--especially if they occur on consecutive plays during the same drive.

2. Dan Dierdorf had an orgasm over A.J. Green beating Champ Bailey on a long pass early in the first quarter, but what he didn't tell you is that Green pushed off in order to get any separation.  That's a negative--on Dierdorf.  The play in which Bailey gave up the touchdown to Green?  Bailey was playing inside leverage, so the route call was going to be a nightmare from the beginning.  Bailey got beat on a few other occasions, but not on these two plays.

Later, Andy Dalton made the mistake of thinking Bailey was a first-year corner and paid the price with an interception.  Technically, I have to put Bailey here, but I do it with great reservation.   After the game, Bailey rated Green as one of the top three wide receivers in the game.

3. The kickoff coverage unit won't win any game balls today.  Were they missing Joe Mays?  Hopefully, I'll get a chance to review the film later in the week to shed more light on this.

4. Roger Goodell met with many of the first responders from Hurricane Sandy.  On a related note, the NFL cameras were there and made sure you knew all about it.  Something tells me if Goodell could have worn army fatigues and thought the fans wouldn't laugh him off the field, he would have done it.

5. Terence Newman made one of the better plays you'll see today on his interception of Peyton Manning in the third quarter.  We can blame Eric Decker for getting outmuscled, we can blame Manning for putting the ball too far ahead, but sometimes, a cornerback just makes a good play.

6. Speaking of Newman, his second interception was all on Manning.  I'd rather Manning just put it to the back shoulder on that throw.  And now, I'm sure he would too.

7. Coming into the game, the Broncos were first in yards rushing per play on first down out of 11 personnel (1RB, 1 TE, 3WRs).  The primary reason has been Manning's ability to audible to the stretch play when he's got the other team in their nickel package and he sees two safeties high.  Today, because of the strength of the Bengals front four, the running game failed to materialize.  In fact, it appeared as if Manning audibled into some pretty disastrous runs today.

8. Let's hope Chris Kuper's injury isn't of the season-ending variety.  I like exploring every nook and cranny that is Manny Ramirez, but I like the Broncos' sustained running game more. For what it's worth, John Fox didn't know after the game the extent of Kuper's injury.

9. Sitting Knowshon Moreno over Lance Ball each and every game isn't good strategy, in my humblest of opinions.

10. Dan Dierdorf, I'm glad we had this talk. Now, can you leave us the hell alone?

1. What kind of work ethic does it really take to be successful?  Who knows, but we do know this: Peyton Manning arrives at the Broncos facility at 5:45am and doesn't leave until 5pm.  Apparently, that's harder than the Broncos training staff has ever seen--including Shannon Sharpe and John Elway.

2. Last week, the key to the Broncos' success against Drew Brees was their ability to lock down the Saints' receivers in man-to-man coverage, even in four-receiver sets.  It's become apparent that Jack Del Rio's defense will, in large part, depend on the Broncos' health at cornerback.

3. Andy Dalton wants to get the ball out quickly, and when he doesn't, frustration ensues.  So how do you stop Dalton?  Simply take away his first read.  Defensive coordinators have realized this.  Dalton has failed to adjust.  A perfect example of this was the Bengals' first field-goal drive.  Facing a third and goal, Dalton just tucked and ran after his first read was gone.

4. Although Keith Brooking has never been the strongest or fastest guy out on the field, he's been a steady influence at linebacker as a leader.  Before the game he said, "It's a privilege to play in this game, and I don't take that for granted."  Here's hoping Brooking rubs off on D.J. Williams when he comes back from suspension.

5. Willis McGahee did something I love, and something you rarely see anymore in interviews.  He went triple negative.  Before the game, in defending the Broncos' 4-3 record, McGahee said:  "Those games we lost it wasn't that we didn't lose to no slouch."  My thoughts exactly.

6. How good of a teammate is Peyton Manning?  According to Tom Jackson, Manning gets on the intercom during team flights and sings.  He sang "At Last" to Demaryius Thomas, and "Another One Bites the Dust" to Eric Decker.

7. The Jets have a bye week, and I, for one, already miss news of the Ultimate Teammate™.

8. The Bears and Jay Cutler destroyed the Titans today, which begs the question: how good could Cutler have been if he worked as hard as Petyon Manning (or even the Ultimate Teammate™)?

10. Finally, friends, remember to vote on Tuesday, and put democracy into action.  If you live in Colorado, your voice has a little more weight this year.  I'm not saying it matters who you vote for since both Republicans and Democrats are really branches from the same power-corrupted tree.  But at least you feel slightly more important.  On the bright side...get yerself some marijuana.