Tonight, Drew Brees and Peyton Manning were supposed to throw for a combined 600 passing yards. 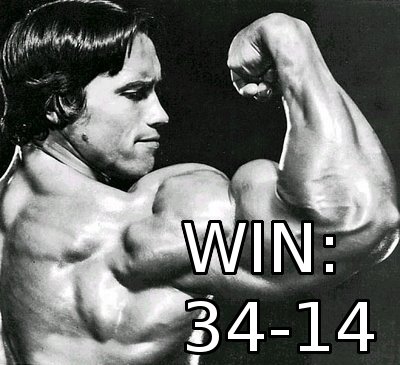 Manning held up his end of the bargain--and it only took him three quarters.

The Broncos defense didn't get the memo, however.  Although Brees wasn't sacked a lot, he felt more heat than a Louisiana strip club.

The player of the game was undoubtedly Wesley Woodyard.  On the night, he had nine tackles, four assists, two passes defensed, one forced fumble, one sack, and an interception.

That's scary good, and right in time for Halloween.

And right in time for the Broncos to give the league nightmares.

1. As long as the Saints were content to play two safeties high, the Broncos (read Peyton Manning) were going to maul them in the running game.  As soon as they brought one of the safeties into the box, the Broncos threw the ball.  Early in the game, it wasn't much more complicated than that, other than a few amazing catches by Demaryius Thomas and Willis McGahee.  Speaking of Manning, he gave a clinic tonight in reading progressions and shuffling in the pocket as usual (along with 300+ yards of passing and his customary three TDs).  We were talking about this in our chat during the game, but if Kyle Orton could have ever learned to shuffle his feet half as well as Manning, his time in Denver would have been a lot different.

2. Willis McGahee ran like an ogre tonight (122 yards).  How do ogres run?  Hell if I know, but it's close to Halloween, so I had to come up with something (Frankenstein can't run).   As an added bonus, Mitch Unrein dressed up as a fullback in the jumbo package.  Scary?  Yeah, for the the Saints.

3. I hate to agree with Jeff "The Passion Of The" Legwold, but Von Miller as the Defensive Player of the Year is not a crazy thought.  This year Miller is a complete player who can cover when needed.  One of the best plays of the game came when the Saints tried to crack back on Miller only to discover Von is a ninja.

4. Chris Harris continues to take advantage of the opportunity he's getting in Tracy Porter's abscence.   Also, he makes me look like a genius for touting his starting potential for the last two seasons.  Outside of Wes Welker, Harris has done everything the Broncos have asked, and he's done it at a high level.

5. Meanwhile, Woodyard is making it exceedingly difficult on the Broncos when D.J. Williams comes back.  I can't see how you can take Woodyard off the field. If you simply must play D.J., I guess you put him at the Mike.  The other option, use Williams only on passing downs and in nickel and dime situations.

6. Orlando Franklin could block a freight train in the running game.  Pass blocking--well, that's another story; further, we're scared to say anything negative.  He'd kill you.  The guy who plays at the other end of the line from him, some guy named Ryan Clady, completely dominated both facets, all night long.   For good measure, Chris Kuper, Zane Beadles, and Dan Koppen(hagen) were solid to round out the unit.  If you've not seen Koppen making line calls, pay attention.  It's happening, people.

7. Imagine what will happen when Demaryius Thomas becomes above average at running routes.  He won't just be good, he'll be one of the top three wide receivers in the game.  And before you start whitening Eric Decker by saying he's the Broncos' possession receiver, take a look a his routes tonight.  They weren't routes made for a possession guy.

8. Derek Wolfe has been taking a little heat from fans lately for some of his grades over at ProFootball Focus, but it's not like he's getting worse as the season progresses.  I think he put better pressure on Brees tonight than any other Broncos defender.

9. Champ Bailey is so consistent, we tend to take him for granted.  Consider the situation remedied.  If you get the chance, watch how Bailey played Marques Colston out the outside and in man coverage--it's not just a lesson in coverage, but in geometry.

10. Jack Del Rio continues to get the most out of his psycho fronts.  I'm not sure that it's as confusing as the results have shown over the last two games, but I'm not complaining, either.  For what it's worth, Del Rio appears to be playing more and more man coverage as the season goes on, and up front, he's employing more stunts (thanks, Doc Bear!).

1. If you believe football is a momentum-based game, then the fuel for that momentum has to be the turnover.  Willis McGahee's fumble in the first quarter took the Broncos' reality from 14-0 to 7-7 within the span of a minute.

2. I'm not writing this because I wanted the Broncos to draft Doug Martin, but I'm still waiting for that day when Ronnie Hillman takes my breath away with something spectacular.  Knowshon Moreno may have made a few mistakes during his time as a Bronco, but the decision to continue to deactivate him so that Hillman gets some on-the-job training (see Legwold note below) is the wrong one.  Yeah, I know.  Hillman had a great run tonight, but the hole was five feet wide.

3. When Peyton Manning hit his hand on the defender's helmet near the end of the first half, my breath did leave me.  When I woke up a few minutes later in a puddle of my own spit, Manning was still in the game, so I just blacked out the bloody image of his thumb.

4. The bad news?  The Broncos had to cover Darren Sproles with their linebackers tonight.  The good news?  A.J. Smith arrogantly let Sproles leave San Diego (as "The Head" usually does).

5. Shannon Sharpe said earlier today he believes the Broncos will run the table from here on out.  Quick, grab a Raiders fan by the hair and knock on wood.

6. Virgil Green is a bust--just kidding.  I had to see if you were paying attention.  For the record, Green was drafted in the seventh round, and tonight, that seventh-round draft pick had three catches for 44 yards.

7. Trindon Holliday is a card-carrying member of the Association for Leprechauns (AFL).  I hate Leprechauns.  Otherwise, he's dangerous when he holds onto the ball.

8. Irrelevant stat of the night: The Broncos were only 5 for 12 on 3rd downs.

9. Cris Collinsworth just said,  "You are what your record says you are."  If that's not bad enough, he attributed the source as John Madden--you know, the guy on the video games, kids (and the original Fat Man).

10. I'm dressing as a streaker for Halloween, so check your police blotter if you live in the Denver area that night.

2. The Kansas City Chiefs continue their descent into a place only known as Pioliville.  Former Broncos quarterback Brady Quinn barely got a sniff as a starter before his third drive of the game ended with the proverbial "head injury."   Don't look now, but the Raiders are tied with the Chargers at 3-4.  Since the Broncos have beaten both the Raiders and Chargers and are now 4-3, you can go ahead and stretch that one-game lead a little farther.

4. As expected, pressure continues to mount for Rex Ryan and the Jets to give the Ultimate Teammate (UT™) a chance to play quarterback.  As I tuned in and out of the early games this afternoon, I managed to listen to the Spanish-language broadcast of the Jets-Dolphins contest.  In the second half the chants for the UT™ in the stadium grew ever louder and ever more frequent.  I predicted Mark Sanchez would last about eight games before being replaced.  That timetable seems about right--unless, of course, Rex is dead set against using the UT™.  But why?  The UT™, for his part, had just two yards rushing and a controversial role on a blocked punt that resulted in a touchdown for the Dolphins.

5. Tony Carter on if he watched football during the bye week: "There's nothing else on T.V. So I watch football."  Tony, two words, my friend--Boardwalk Empire.

6. As usual, Bob Costas tried to analyze a football move (the signing of Peyton Manning) like he was dissecting hiddening meanings in a post-modern novel.

7. Legwold said the decision to sit Tracy Porter is still a precautionary one--in other words, the Broncos want to make absolutely certain there's nothing wrong with Porter before they let him play another game.  Can't argue with that move.

8.  I once gave Ted Sundquist a lesson in statistics--it looks like he didn't learn anything I taught him.

9. None of the Broncos' players thanked God or Jesus Christ in their post-game interview with Michelle Tafoya, and I for one am starting to miss it just a little.  It's almost like Jesus doesn't care about the scores of these games or something.   Later, I'll say a little prayer that everyone plays the Broncos with their nickel package all night long like the Saints did tonight.  Then Willis McGahee becomes an Orange and Blue god.

10. For those of you who are going to be impacted by Hurricane Sandy, please play it safe.  We need your clicks too much to lose you as a reader care too much about you. In all seriousness, don't do what your friend TJ would do--listen to the authorities.