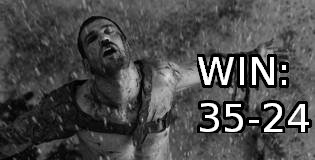 noun
1. Proper name, short for Norval, popularized by parents in the 20th century who wanted their kids to be bullied at school.

verb
2. To cause to lose a football game in the fourth quarter.
3. To reverse fortune, especially during the act of playing American football.

San Diego, you just got Norved!   And you witnessed the greatest comeback victory in Monday Night Football history.

Norv Turner wasn't really responsible for today's Broncos carnival (turnovers and big plays were good enough), but that was fun as hell to write.

Now, let's break this thing down in thirty little ways:

1. Peyton Manning's checkdowns and progressions have always been his strength.  None was better than the one he had on third down in the second quarter to Willis McGahee to get the Broncos out of their own red zone.  It didn't result in points, but did flip the field.  Oh, Manning only had another great game (outside the pick-six) and posted a 129.0 QB Rating.  And his mobility was once again on display.

2. When the Broncos are in no-huddle mode, have you noticed the energy level?  That's right.  It goes up--way up.  Your guess is as good as mine as to why the Broncos insist on waiting to go to it until late in the second quarter (aside from the fact that they are generally getting their collective butts kicked).  This is especially true when facing the Chargers, who are notorious for substituting their defensive linemen.  We implore the Broncos to once again go to the no-huddle earlier within games.

3. I continue to see Kevin Vickerson doing everything the Broncos ask of him and more. In the last two years, I've been hard on Big Vick, but this year he's holding his position at the point of attack like a guy his size should.  And he's always been good at reading the screen.

4. Demaryius Thomas's touchdown was as good a route as we've seen him run this year.  Quentin Jammer had no chance against it.

5. Eric Decker may have tripped over his own feet, but one can't deny him the great game he played otherwise.  He dragged dudes on his back into the end zone like he was Earl Campbell.

6. Tony Carter returned a fumble for a touchdown and picked off Powder Blue Phil, so he's good in our book.  Speaking of Carter, Brian Dawkins called him a ball magnet.  I guess he wasn't lying.

7. Brandon Stokley's touchdown catch was pure poetry.  The metaphor? Who cares, it was f@#$ing awesome.

8. Willis McGahee has always said he gets stronger as the game gets longer.  You know what?  He's right.  We've just never had the chance to see him get the ball, because the Broncos have usually been down.

9. Chris Harris may not have the same cover skills as Tracy Porter, but he easily redeemed himself for his poor performance against the Patriots last week.  More importantly, he made me look good tonight for saying he has the ability to be a starter in the league.

10. Lastly, John Fox said before the game that he has never had a team practice takeaways as much as this team in his entire career; further, he said that he is a big believer that turnovers come in bunches.  He's either incredibly right or incredibly lucky.  Either way, we'll take it.

1. Trindon Holliday was claimed off waivers this week; he may find himself back on waivers by tomorrow.  The guy is fast, and he may have all the talent in the world, but if he can't catch, he's just a liability.

2. Omar Bolden watched Holliday's handiwork and decided he'd give the whole fumbling thing a shot, too.  Sure, I could complain the referees blew the call on the second recovery, but why?

3. I'm not a big fan of the 9 route when you're the hot receiver.  Neither is Peyton Manning.  Matthew Willis?  He has other ideas.  I could see Willis changing the hitch if the DB were playing close to the line of scrimmage, but he wasn't.

4. Joel Dreessen was supposed to be the Broncos' best blocking tight end.  Tonight, he was pushed all around the field.  Thankfully, he had a great night catching the ball (outside of one dropped pass).

5. Jacob Tamme was even less effective in the running game.

6. Sure, Mike Adams didn't need to push Antonio Gates, but my guess is that Gates is the one who is going to draw a fine from the league.  He punched Adams with his helmet off.

7. Eric Decker didn't realize the Chargers had manipulated the sprinkler system when he appeared to trip over his own feet on a clear touchdown in the first half.  I'd like to know who was eating the Buffalo Wild Wings.

8. Rahim Moore was out of position a few times tonight in Cover 3. Facing Antonio Gates can do that to a guy.  The touchdown in which Philip Rivers pump faked him out of his inside leverage was symptomatic of Moore's entire evening.

10. I thought the entire offensive line was a little sluggish tonight in the run. In particular, I thought Chris Kuper was rusty, Ryan Clady was hobbling, and Orlando Franklin was a bit slow.  But they didn't allow a sack, even if it was mostly due to Manning's quick release.  By the way, John Fox went out of his way during his pregame interview to praise Manny Ramirez for his work, and for proving he can be a starter in this league.  We're not so sure.  A capable backup?  Sure.  A starter?  If you felt that way, you'd have started him in the first place.

1. Did you know the Broncos have  a Player Leadership Council?  It includes Joel Dreessen, Chris Kuper, Keith Brooking, and Peyton Manning.  Leadership is a team sport.

2. Coming into the game, the Chargers were a top-five defense against the rush.  So it wasn't that much of a shock the Broncos had some difficulty running the football--oh, did we mention the Broncos went down 24-0 in the first half and were forced to abandon the run?

3. Ronnie Hillman has a great burst, and I'm sure he'll contribute mightily at some point in the Broncos' future; further, he even had a decent game tonight.  Yet, to my eyes, I'm not sure he'll ever be more than a third-down back in this league.

4. John Fox: "We practice taking the ball away as much as anytime in my coaching career.  I've always believed you get what you emphasize."  That's the understatement of the night.

5. For those wondering if the Broncos will welcome D.J. Williams back this year, wonder no more.  When asked before the game about the middle linebacker position John Elway said: "There's not much out there right now."  He was talking about free agents, but it was more than clear that he was less than enthused for what he was seeing on the field.

6. Jeff Legwold expressed concern about Tony Carter playing on the outside against Robert Meachem, so you knew Carter was in for one hell of a game.  How about Antonio Gates, Leggy?

7. If you've ever wondered just how stupid Raiders fans can be, look no further.  A group of them are considering suing the NFL for biased officiating against the Silver and Black.

8. Phil Rivers said: "It's me versus Peyton tonight."  If that's the case, Phil, not only did your team lose, but so did you.  And Eddie Royal, you're dead to me.

9. This never gets old: Jay Cutler wants you to know that the negative things said about him hurt his feelings.

10. Jon Gruden may be slightly annoying with his rah-rahness, but he's still more knowledgeable than every other color guy working.