It's elk season here in Colorado. 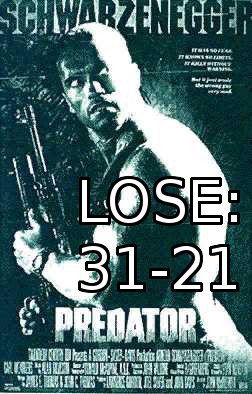 Today, the animals were safe, though.  It was the Broncos who got gutted.

The Broncos knew the Patriots were going to run a no-hunddle offense. They'd seen it on film for four weeks.

The reality of playing against the no-huddle, though, was quite different.

The Patriots regularly snapped the ball with twenty-five seconds on the clock.  That's not just a no-huddle offense. That's a video game.  Sixty minutes later, the Broncos were gassed, John Fox was baffled, and the Broncos were wounded.

Like any wounded animal, the Broncos did put up a fight.  But in the end, it's the Patriots who wore orange and came in for the kill.

1. The Broncos apparently scripted their first series--according to Willis McGahee, who told 850 KOA when they reached him on the sideline to ask him why he wasn't in the game on the first series.  And if it weren't for a fumble, the script would have led to seven points.  The Broncos did a great job of hitting short routes, which then set up the route over the top to Demaryius Thomas.

2. Nice call by Peyton Manning/Mike McCoy on the Joel Dreessen touchdown--a play fake had the Pats selling out to stop McGahee.

3. Von Miller was the real bright spot on defense today.  If Miller doesn't have the kind of game he had today, the Broncos lose by a lot more.  Von times the snap of the ball as well as Neil Smith used to.  He's easily the best defender the Broncos have had since Champ Bailey was dominating the league in 2005 and 2006.

4. If you take away his fumble, Demaryius Thomas dominated the Patriots secondary today.  Eric Decker wasn't far behind, either. His back shoulder ankle fade was a thing of beauty.

5. For the most part, Peyton Manning had a good game.  There's only so much you can do when your defense burns both slow and fast. All Manning did was pass for 345 yards, complete seventy percent of his passes, and throw three more touchdowns.

6. Brock Osweiler was on the sideline, into the game, and talking to Manning even while the Broncos were down two touchdowns.  Osweiler may or may not be a great quarterback when he finally plays, but you can't fault his intensity of learning.

7. Although it's not really a positive, if you take away two critical turnovers in this game, the outcome is a lot different.  You could say that about every game, however.  What else is new?

8. Jacob Tamme and Joel Dreessen are proving to be everything we'd hope they'd be when the Broncos signed them this year.

9. Mike Adams (12 tackles) and Rahim Moore (9 tackles) made several touchdown-saving plays today.  That's not particularly good, because it tells you how badly the Broncos got beat down in the running game.

10. Eventually, the Broncos have to win the turnover battle.  Don't they?

1. Some have questioned why we are always so hard on John Fox's old-school way of managing games.  The reason is that most of the time he's flat wrong on the percentages.  Today was another example.  Why Fox decided to punt the ball when the Broncos were on the New England 39-yard line and facing a 4th-and-5, I'll never know.  Without having the Win Probability (WP) and Expected Points Value (EPV) numbers in front of me, it's hard to say for sure, but my guess is, the numbers didn't support his decision--in other words, his WP and EPV would have been higher by going for it.

2. And for those that don't want to use the numbers for strategy, go with your intuition.  What the hell was Fox thinking after watching the Patriots run up and down the field all game?  That an extra 20 or 30 yards was going to make any difference whatsoever?  It doesn't matter that Britton Colquitt's punt landed on the two-yard line.  The strategy was flawed.  Oh, and if you're a hindsight guy, the results sucked, too.  All the Patriots did was continue their destruction of Joe Mays.

3. As we discussed in our in-game chat, it took Jack Del Rio way too long to switch to a zone, given how badly the defense was playing against man coverage (Mays, Chris Harris, etc.).  Here's another ridiculous strategy: leaving Joe Mays in on third down so the Patriots could attack him.

4. Manny Ramirez started today and proceeded to get beat more often than an actor in a Mel Gibson flick.

5. Demaryius Thomas can do a lot of things, but running ahead of the defense with the ball in his hands appears to be increasingly difficult.  It's hard to hate on Thomas for too long, however, because his talent is simply through the roof, as evidenced by his subsequent one-handed catch.

6. Joe Mays hits his own players harder than his opponents; his coverage skills are like watching a crow try to cover a sparrow; his endurance is suspect.  As Doc Bear asked last week, why is he starting?  And why is he starting against a team like this that can spread you out on first and second down, effectively disabling Mays's ability to play the run?

I can't imagine Joe Mays as the Broncos' starting middle linebacker next season--perhaps not even next week.  Today, Mays was another Josh McDaniels gift that keeps on giving--to the Patriots.  As Doug Lee has pointed out to me many times, you can't just expect to find a middle linebacker on someone else's special teams.

Never fear, Broncos fans.  Manti Te'o from Notre Dame and Alec Ogletree from Georgia would be immediate upgrades if the Broncos wanted to use their first-round draft pick on inside linebacker.  That doesn't do jack for Peyton Manning, right now, however, unless the Broncos bench Mays.

7. Wes Welker took Chris Harris to school on crossing routes.  Welker does that to a lot of teams, but that doesn't make it any less frustrating to watch. Obviously, Harris is still a first-rate nickel defender, but today, he just got beat.

8. Speaking of Patriots wide receivers, Brandon Lloyd got the better of Champ Bailey in this game, if only by a little.  According to Jeff "The Passion of the" Legwold, Champ told him before the game that Lloyd was one of the few wide receivers to whom he taught everything he knew during his career.  I'd say Bailey is one hell of a teacher if Lloyd's stats are any indication.

9. The no-huddle works both ways, as the Broncos defense saw first hand.  The biggest victim was Chris Harris, who got the business end of a Wes Welker stick.  But the real story was the Broncos' inability to stop the run on first and second down, and getting gashed for five yards per carry on their first touchdown drive--make that the whole game.  Of all the things that will be written about the Broncos in the coming week, just remember that this game was won and lost (and make no mistake, we mean lost) as soon as the Patriots walked into the film room and realized they could easily gas the Broncos defense.

10. I'm really not doing my job unless I empty my shells here on Joe Mays.  Just how bad in Mays in coverage?  I'm not completely sure, but the rumor is he's still being treated for third-degree burns at a Boston hospital.  How bad is Mays against the run?  He sticks to pulling guards like Gorilla Glue.

10c.  I had Willis McGahee hovering between positive and negative this whole game, but with that last fumble, the decision became easy.

1. Willis McGahee is not a fan of pink--either that, or he thought his pink gloves and spikes were underperforming on the first series.  If you noticed, he went to the sideline and changed out for his regular spikes and gloves.

2. Jim Nantz spoke with Dave Logan before the game and said that he and Phil Simms have called fifty-five Patriots games in the last five years.  Why, then, does it feel like they've only tortured Broncos fans?

4. Rahim Moore before the game: "As long as Tom Brady's eyes are open and his arm is working, the Patriots are going to be a great team."  You'll get no argument from me.

5. I'm not a fan of the call to run the ball at midfield facing a third-and-four with Lance Ball in the game.  Even if you surprise the Patriots, does Lance Ball have the burst required to get the yards?

6. How badly does Peyton Manning miss J.D. Walton?  Apparently, a lot more than you think.  Manning was interviewed before the game and he said as follows: "I feel sick to lose J.D. Walton.  J.D. came to every throwing session with Demaryius Thomas and Eric Decker during the offseason.  He came back from vacation just to snap the ball over and over."

7. Obligatory Tebow blast--Champ Bailey told Jeff Legwold before the game that last year, many of the players on the team didn't think they had any chance to beat the Patriots.  This year?  Bailey said all 53 guys on the roster believed.

8. In case you missed evolution in action, Bill Belichick has noticed how defenses are getting smaller and smaller in order to defense the no-huddle offense the Patriots have been running the last several years.  So he's still spreading the defense out, but now tailoring his team to running and pounding out of the formation.  And without the ability to subsitute, it leaves defensive coordinators in a tough spot.

9. John Fox admitted to being superstitious during his pre-game road routine.  What does he decide to do after this game?  Switch chewing tobacco?

10. Brady Quinn made an appearance at the end of the Ravens-Chiefs game due to a head injury to Matt Cassel.  He completed three quick passes and helped lead the Chiefs to a late field goal.  It's still too early to render a verdict, but expect Quinn to get the start next week, and further, I expect he will remain the Chiefs' starter when the Broncos face the Chiefs later in the year.