When Peyton Manning joined the Broncos, this is the type of game fanatics had in mind. 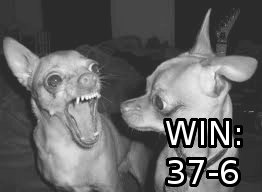 The Broncos get an early lead.

They build on that lead running the ball.

Then, they let loose the angry hounds.

Who are the hounds?

The entire Broncos defense, which allowed the Raiders only one third-down conversion all game long.

1. One of the fears going into the game was Denver's inability to shut down a zone running scheme.  This fear was magnified with Darren McFadden (well known for his zone cuts) coming to town.  Today, the combination of Derek Wolfe, Kevin Vickerson, Mitch Unrein, Robert Ayers, and Justin Bannan fared rather well.  I think part of the reason for this, too, is that Keith Brooking is much better as a middle linebacker than he is on the weakside.

2. Von Miller is known for his speed rush, but as we've said many times, his ability to hold the edge is the most underrated part of his game.   Miller and Elvis Dumervil were close to multiple sacks today.  Miller even made some great plays in coverage, which hasn't been his skill in the past.

3. Zane Beadles easily had his best game of the season.  During our in-game chat, we remarked several times that Beadles's ability to trap best fits his skills.  The rest of the offensive line followed suit.  And how smart does it seem now that the Broncos signed center Dan Koppen, who has a lot of experience running the no-huddle offense?

4. Peyton Manning's tempo today was almost perfect (along with his QB rating).  Like the rest of us, the Broncos felt like they needed to break out the no-huddle offense early.  The result?  The Broncos dictated the tempo of this game--all game.  They also converted a huge number of third downs against the Raiders' simple Cover 2 by utilizing what we'd expect (crossing routes and checkdowns to the running backs).  Manning rarely (if at all) made a bad call after his presnap reads.  Notice something else?  Yeah, it was the minimal use of the fullback.  I expect the use of the fullback to fade more each week.  It's just not the offense Manning is used to.

5. Jack Del Rio played man for most of the first quarter so he could bring extra pressure when needed.  He also mixed in several psycho fronts (fewer defensive linemen with the rushers standing up before the snap to disguise the blitz), which, in the second half, confused the hell out of Carson Palmer (along with a deadly pass rush).  Expect to see more of this in the future.

6. Demaryius Thomas can accelerate out of a jailbreak screen as well as anyone in the league.  Despite his fumble in the second quarter, there's no doubt the Broncos will continue to find ways to get the ball into his hands in space.

7. Willis McGahee certainly didn't run the ball today like he had bruised ribs.  Just for kicks, he worked in some shake 'n bake.

8. Keeping David Bruton for his play on special teams looked rather genius today.

9. One thing that gets lost in all the talk of Peyton Manning's arm this year is that Manning seems more mobile than he used to be.  That's not saying much, but it's enough to extend plays when the need arises.  Want more proof?  Did you see the consistency when the Broncos roll him out?  The touchdown to Eric Decker was another good example. By the way, did you notice Manning did not audible when he saw the Raiders were going to blitz on that play?  He knew they were already in the right call.  When you see that in the future, you should smile--presnap.

10. Eric Decker's fiancee won't be criticizing Broncos fans this week.  Decker made beating the Raiders' zone coverage look like a stroll in The Black Hole the park.  He worked particularly well to the outside and was just a foot away from having another touchdown of his own.

1. Obviously the Broncos tried to get a little too cute on their fake field goal.  It's easy to sit and criticize the result, but let's be honest: the call itself was ridiculous.  If you have to rely on the passing skills of Matt Prater and the receiving skills of Zane Beadles to get a first down, just kick it and move on.

2. The swing passes to the flat caught Denver completely by surprise in the first half.  We'll (meaning Doc and Ted) will have to go back to the tape, but my first take is that the weakside linebacker (Wesley Woodyard) may have missed his assignment.  But the film won't lie.

3. The crowd noise in the first quarter was barely audible.  You can do better than that, SAF@MH.  Perhaps the insulin spikes in The Rockies right around 2pm.  The good news?  The crowd was infinitely louder in the second half.

4. Did the replacement officials stick around to rule on Eric Decker's catch in the second quarter?

5. If you wanted another lesson in how randomness affects the outcome of football games, look no further than Demaryius Thomas's fumble in the red zone.  When ghosts slap at the football, I guess you've got to cover the ball with two hands.

6, Carson Palmer played way above his skill set today--specifically in the first half.  Despite one sack, six hurries, and four quarterback pressures in the first thirty minutes, he managed to get the ball away.  It was just a matter of time before he came back to earth.

7. Sebastian Janikowski's new diet is a lesson in failure.  What he's eating these days?  Does it matter?  Whatever it is, it's obvious he's going back for seconds and thirds.

8. Ever notice how often Jim Nantz licks the sweat off of Phil Simms's balls?  His argument for why Simms should be in the Hall of Fame rests primarily on the idea that Simms played in a bad stadium.

9. Champ Bailey got beat once today--that's once too many.  Okay, I'm joking.

10. As I wrote this, I just saw Peter King running in shorts on television.  Now I'm blind in one eye.  Some things are better left to the imagination, King, you windbag.

1. Broncos insider Jeff Legwold on Knowshon Moreno being inactive for two straight weeks:  "The Broncos want Ronnie Hillman to be the number two."

2. The word from the locker room is J.D. Walton broke his leg.  That's bad for the short term.

3. Legwold said before the game that Manning was on pace for 42 sacks, which would be the most he's ever had during a season.  Thankfully, that pace has slowed after a week in which Manning wasn't sacked at all, and was only even hit once.

4. Legwold also said the Broncos coaches are desperate to get Chris Kuper back in the lineup.  If you've watched Manny Ramirez over the last several weeks, you'll know why.

5. Before the game, Chris Harris told us everything you needed to know about how the scab referees were affecting games: "With the regular refs back you have to watch how you put your hands on the receivers."

6. I was forced to watch the early game between the 49ers and Jets.  I was shocked by how much of a non-factor Tim Tebow was in the game plan.  Tony Sparano seemed rather boring in his calls when utilizing his Tebow package.  More important to fans of Tebow?  Mark Sanchez was even less of a factor.

7. Peyton Manning was interviewed before the game.  He didn't buy into the Broncos/Raiders rivalry.  For him it was just another game.  Obviously, he's never taken a battery (or snowball, right, Lincoln Kennedy?) to the head.

10. Since I didn't get to my pre-game limerick, I'd like to dedicate this to Raiders Fans:

So black was the hole in the heart
of fans of the Raiders on their start.
They sucked yet again,
and could not say when
their season did come all apart.