The highlight of today's game came at halftime when the Broncos put Rod Smith into their Ring of Fame. 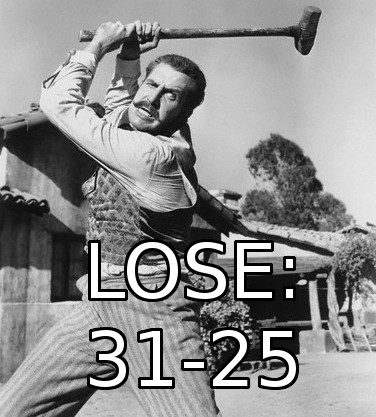 The rest of the Broncos were in the locker room.  Otherwise, they would have been down twenty to start the third quarter.

Peyton Manning didn't throw three interceptions today, but he still needed to rally late for the Broncos to have any sort of chance.

This week, the defense put themselves in a hole, as Matt Schaub and the Texans took both a sledgehammer and a surgeon's scalpel to the Denver defense.  Dropped passes on offense, mental errors (45 yards in personal fouls on one drive alone), and J.J. Watt took care of the rest.

The game was a lot less exciting than the final score (and the Broncos) would admit.  The truth is this team is still in transition, still adjusting to themselves, and still trying to figure out their basic philosophy.  Are they a no-huddle team?  Are they a blitzing team?

Check back in a few weeks and we'll have a better idea.  Perhaps the Broncos can play well on both sides of the ball for once.  Thankfully, the AFC West will still be there for the taking.

1. Rod Smith goes here.  Smith brought his lunchbox to work everyday.  It only got him a team record for receptions, touchdown receptions, and total yardage over a career.  Said Smith before the game about the Ring of Fame: "It's awesome.  I spent my entire career here.  The people know me and who I am and what I'm about."

3. The field position that allowed Dumervil to make a big play was set up by the first of many awesome Britton Colquitt punts.  Why am I glorifying a punter?  Because that's how much field position matters. Colquitt should get a game ball for as well as he kicked today.

4. Speaking of special teams, I'm starting to come around to the idea that Matt Prater may indeed be an outlier.

5.  We all had a feeling the Broncos would utilize crossing routes as a counter to the deep-zone coverage Manning has faced during the last two weeks.  Sure enough, it came to pass.  If you noticed on their second drive, the pass to Chris Gronkowski was a great combination of a clearing crossing route with the fullback heading to the flat.  That's just great scheming.

6. After Andre Johnson was gifted a touchdown, Jack Del Rio put Champ Bailey in man coverage on him.  What happened?  Absolutely nothing--unless you count scab officials throwing flags at ghosts and a perfect throw as something.

7. The season Wesley Woodyard is putting together has flown under the radar to everyone except for one guy.  That guy's name is D.J. Williams.

8.  When Eric Decker's head is in the game, he's got a solid pair of hands.  But tell me, when is his head in the game?

9.  Kevin Vickerson gets the nod for best effort on a crappy defense today (outside of Bailey).

10. Rod Smith goes here again.  Here's another gem from Smith: "If you don't have that thought [that you are great] in everything in your life, you don't stand a chance."

1. Settling for field goals when your opponent scores touchdowns is a simple math problem--and a problem for your team.

2. Keith Brooking isn't as young as he used to be: he can't get caught cheating inside like he did most of the game.  He got a taste of some speed medicine.

3. Both Brooking and Joe Mays were brutal in this game.  Yes, the Texans run a zone scheme, but both linebackers consistently guessed inside, only to watch the halfback stretch the play to the next hole over (kinky, I know).  Worse, Mays actually went backwards today.

4. As I wrote the lines above, Joe Mays got burned to the outside yet again.

5. Of course, when you get it pounded down your throat like Del Rio did in the first half, your defense is open to the play fake.  Mike Adams or Tracy Porter?  It's hard to tell with the match-up zone, but at first glance, it appears as if Porter was clearly expecting help to the inside on Johnson's TD catch.  My guess is Adams is the culprit.  Either way, we're cryin'.  On the second touchdown, it was more of the same.

6. If you didn't catch the memo, here it is: you can't rush three and hope to succeed with Elvis alone.  Memo #2: Loop stunts only work when the guy not doing the looping sets it up.

7. With as much as Wade Phillips brought the blitz today, it was pretty apparent the Texans didn't believe Demaryius Thomas and Eric Decker could beat man coverage.   Right now, I'm not sure he's wrong.

8.  J.J. Watt was born.  And that, well, that really pisses me off.  Watt or Von Miller if you redrafted today?

9. I'm not a big fan of Knowshon Moreno, but I think the battle for backup running back wasn't settled today after seeing the average play of Lance Ball and Ronnie Hillman, although Hillman did do a good job of picking up the blitz a few times.

1. Eddie Mac said in his pregame comments that Peyton Manning is passing to Brandon Stokley and Jacob Tamme because he trusts them more.  I'm not convinced that's true after watching today's game, but if it is, Demaryius Thomas needs to get better separation if he wants to earn that trust.

2. Even the scab officials couldn't miss Omar Bolden's blatant destruction of the punt returner in the third quarter, nor Von Miller's blatant personal foul.  Joe Mays's hit on Schaub?  Feel free to weigh in.  During our in-game chat, it was a big-time point of contention.  At the end of the scoring drive, however, the Broncos had 45 yards of penalties.

3. If you can think of a good reason why Eric Decker slid down near the end of the third quarter mid-stride, please, let us know.  Eddie Mac thinks Decker actually thought it was the fourth quarter.  If that's the case, I'm a little worried.

4. When it's fourth-and-seven and you're down twenty points with almost a full quarter to play, is it the right call to punt?

5. I don't care how many years go by - you'll never convince me that Brian "Overtrained Athlete" Cushing isn't on the juice.

6. One positive on the day?  The Chargers got boat raced.

7. Another negative?  The Raiders beat the Steelers after that fat ass Sebastian Janikowski kicked a last-second field goal.

8. How banged up are the Broncos?  In a few days we'll know, but from the looks of it, the Broncos could be down a few at the skill positions.

9. Willis McGahee said the margin of error in the NFL really is small.  Until the Broncos straighten out the communication between their cornerbacks and safties, get off the field on third down, and stop the mental breakdowns (penalties, dropped passes), that margin only grows.

10. I know I keep talking about Rod Smith, but it's worth it.  When asked about his favorite memories in his career, his answer included calling Raiders fans "those people" and mentioning batteries and rocks.