Anyone can hang in the first half. 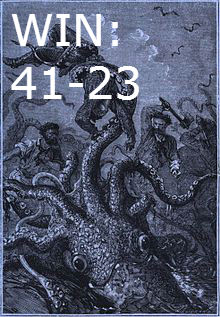 It’s how you play in the second half that matters.

Under Peyton Manning, it’s become a well-known story. The Broncos come out and see what the defense wants to do. They run, they pass, they do a little dance. They even score a few points.

In the second half, they release the Kraken.

Players, coaches, even little brothers—they all drown in the wake.

Lay it down, Broncos fans.  Give me your list(s).