Peyton Manning said the Broncos are a work in progress. 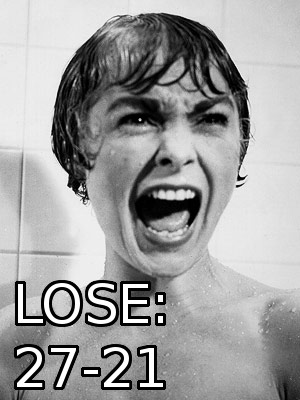 Perhaps we should have believed him.

In Week 1, we all caught a case of Coltsahanta Virus--the feeling of invicibility that results from having Peyton Manning under center.  Unfortunately, it's a virus that hasn't been communicable since 2009.

It would be easy to blame this loss on a group of replacement referees that blew call after call after call--they actually referred to the Falcons as "red" at one point during a penalty.  The faster the league replaces the replacements, the better.

Yet, this loss is mostly Manning's piece of work. You can't spin the loss any other way.  Despite a flurry of activity late in the fourth quarter, Manning floated several passes, turned the ball over three times in the first quarter, and often checked into poor audibles.

Get back to work, Peyton.  I believe you now.

1. The defensive front was put in a tough spot after the interceptions, but they hardly ceded any ground to the Falcons. In particular, Mitch Unrein and Robert Ayers stood out.  The Falcons only had 127 yards of total offense in the first half, and 275 for the game.

2. Willis McGahee ran like his team had turned it over four times in the first quarter--as a matter of fact, they did.

3. Champ Bailey blanketed receivers like a bad cologne, and for most of the night, they couldn't get the smell of Champ off themselves.

4. Brandon Stokley had hands like velcro--after they've been coated with super glue.

5. Von Miller isn't just strong and fast.  He's also slippery.  I'm not sure I've ever seen a guy so quick that he can take on a guy twice his size and make a tackle without ever having the blocker touch him.  He also beats double teams at most opportune moments.

6. Demaryius Thomas emerges as an early favorite for the Pro Bowl.

7. J.D. Walton had a tough assignment with the crowd noise.  For the most part, he didn't screw up.

8. Britton Colquitt, if you didn't notice, kicked the hell out of the ball, averaging 50.2 yards.

9. As much as I rake Kevin Vickerson over the coals, he threw his weight around like a big boy tonight.

10. For as badly as this thing went, it's almost unbelievable the Broncos were even in the game in the fourth quarter.

1. Denver couldn't have started any worse-- the dropped pass, the line getting blown up, and Manning's poor decision on three interceptions, and running backs running the wrong way on running audibles.

2. Speaking of Manning, there's no clean way of saying that he floated the ball on all of his interceptions.   Even worse, he seemed a little frazzled and panicked during the entire first quarter.  To add insult to injury, Manning made several miscalculations and checked into plays that went right into the teeth of the defense.  Tonight, he lost his game of chess.

3. The day Tony Gonzalez left the Chiefs was like Christmas.  I'd since forgotten the depths of my respect hate for Tony Gonzalez.

4. Knowshon Moreno fumbling the ball was a tragedy.  What's worse?  The refs blowing the call on who recovered the fumble.

6. Manny Ramirez really moved around in the game.  Unfortunately, the direction he went was backwards.  I didn't think it possible for an offensive lineman to get pancaked on multiple occasions, but apparently, it does happen.

7. I guess I have to place Tony Carter here, but only because the replacement refs gang banged him.  Otherwise, Carter played Julio Jones rather well.

8. Remember Mike Nolan?  You know, the guy who made Josh McDaniels look like John Travolta in Saturday Night Fever? I hate that guy.

9. 96 yards in penalties is unacceptable, but the replacement referees, as we've noted, did the Broncos absolutely no favors.

10. Did I mention how dogsh#@ the replacement referees are? As Steve Young said, the NFL doesn't give a crap.  It's all about $$, and the NFL knows you'll watch no matter the quality of the officiating.  In a related note--GFY, Roger Goodell.

1. If a tree falls in the Georgia Dome, and no one hears it, does it make a sound?

2. Jon Gruden tried to work his Chucky magic with Peyton Manning during a pre-game interview, but Manning was his normal relaxed self.  That fist-pumping, rah-rah stuff may work on starstruck college quarterbacks, Jon, but when you're speaking to a pimp, you should take it down a notch.

3. I don't listen to many pundits, but the first time I heard someone say the Colts made a mistake by letting Manning go was when Keyshawn Johnson said so tonight.

4. The toughest guy in the stadium was the kid in the Champ Bailey jersey taunting the Falcons fans at the end of second quarter.

5. Get well soon, Chris Kuper.  And I say that as a guy who was never that high on Kuper.

6. As a reminder things can always be worse, Mike Shanahan lost Brian Orakpo and Adam Carriker for the season today.

7. The first down the Falcons converted near the two-minute warning was a pick play by Tony Gonzalez.  When you re-watch the game this week (if you can bear it), make sure you look for it.

9. Keeping Keith Brooking around for toughness was probably the right move. Although he missed two tackles by my count, he's got a little woodshed in him.

10. Peyton Manning blamed himself in the post-game interview, as you would expect he would. Don't panic, amigos.