I believe it was scholar Michael Gerard Tyson who once said: "Everybody has a plan until they get punched in the face." 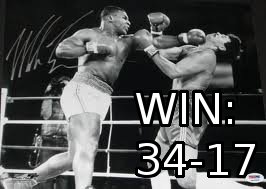 The Ravens had a plan. That plan probably included a healthy dose of Ray Rice.

Then they found themselves bloodied to the tune of 17-0. The plan shifted to the arm of Joe Flacco.  And we all know that's no plan at all.

Somehow the Ravens confused this year's Broncos with Denver teams of the past.  It began with a push of Eric Decker by Cary Williams and didn't stop until Decker beat Williams like he was Gerry Cooney.  The rest of the Ravens were pushed all over the yard and buried.

The Ravens are no longer the physical bullies they believe they are.  After most of the plays in the first half, the Ravens were pushing and shoving like it was the year 2000--you know, when Ray Lewis might really murder you.

1. Joe Flacco may be elite, but his quarterback sneak could use some work.  Upon further review, he's not all that elite in any area.

2. Jack Del Rio is worth every penny the Broncos are paying him--and a few more.  An overload, delayed blitz from the trips side of the offensive formation was both clever and destructive.  But that's just one example of the sort of creativity Del Rio is showing this year.  JDR regularly makes use of stunts and crosses and delayed blitzes.  In other words, he dictates, he isn't dictated to.

3. Obviously, Knowshon Moreno ran with authority today.  But who knew he was a hurdler, too?  Seriously, it can't be stated enough how well Moreno is currently running.  Here's a question - is it possible Knowshon is the perfect fit for a Peyton Manning-led offense, in which blitz pickups, audibles, and patience are as valuable as pure running ability?

4. Did the Ravens complete a pass against Champ Bailey?  If it happened, it wasn't for much.

5. Elvis Dumervil brought the quart of eggnog, and then proceeded to force Joe Flacco to chug the whole thing at once.  Seriously, how silly was it to think Elvis Dumervil had lost some skills?  As our own Ted Bartlett showed earlier in the week, it's wasn't just silly, it was downright asinine.

6. Don't tell Ed Reed (he might crush you), but his play is really down this year.  I was first clued into this reality by the Ravens' radio network.  Then, when I watched the game, it was confirmed.  Reed was always a gambler, but now that his skills are gradually in decline, he's likely to double down more often than not.  To be fair, though, we'll note that Reed has been playing with a torn shoulder labrum this year, so it may be too early to render a verdict.

8. The Ravens decided to go hurry-up with three timeouts and under a minute remaining in the first half.  We're glad they did, of course.  It resulted in watching Chris Harris run a 98-yard gasser--oh, and the longest pick-six by a Bronco in their history.  By the way, didn't Harris's play remind you of this play by Champ Bailey?  This is also a good time to point out how long I've been promoting Chris Harris as a starting cornerback in the NFL.

9. Eric Decker plays better when he plays angry.  He was jawing with (and owning) Cary Williams all day long.

10.  The Ravens should fire the advanced scout who told them it would be a good idea to runs a lot of screens against the Broncos today.  The Broncos' linebackers sniffed out the screens like bloodhounds.

1. Pass protection just isn't the same when Manny Ramirez replaces Chris Kuper.  While we're not saying Man-Ram should be released, we're simply noting that Kuper is very important to the Broncos' playoff chances.

2. A lot of criticism may be lobbed Demaryius Thomas's way for dropping an early pass from Manning, but after looking at the play several times, I don't think the catch was a gimme by any stretch (which is what Thomas had to do to make the catch. And to be fair, Manning overthrew Thomas a few plays earlier when Thomas was wide open for a touchdown.

3. Of course, we think John Fox should have gone for it on 4th-and-2 in the first quarter instead of kicking a 27-yard field goal.

4. I guess I'll continue to pick on Fox here: shutting things down midway through the fourth quarter was classic Foxball.  So far, Foxball hasn't cost the Broncos a game, but it's going to at some point.  Let's hope it doesn't happen in the playoffs.

6. Perhaps Ryan Clady missed his glass of orange juice this morning.  His forte--pass protection--took about a quarter to get going.  We'll just chalk it up to an early kickoff.

7. One of the reasons Trindon Holliday had a tougher time getting things going today was simply that the Ravens were wary of kicking to him.  They did a great job of directional kicking and forcing Holliday to the sideline whenever possible.  Also, for whatever reason, Holliday did his best trying to impersonate a fullback.

8. Tony Carter doesn't interfere.  In fact, the only flag you should ever throw on Carter is for "illegal use of invisibility cloak."

9. If there's something to nitpick the Broncos for in this game, it's their third-down inefficiency.  For the game, they converted on just 5 of 16 tries.

10. If there's another, it's the Broncos' ability to cover tight ends over the middle of the field.  If there's an Achillies' heel of the Denver defense, I'd say it's that.  It's also another reason why the Patriots would give the Broncos trouble in the playoffs.

1. I'm now quite sure that Mile High Sports had a scoop on Tracy Porter's attitude problems.  Porter decided to bring God into his recent struggles to make it back to the Broncos' lineup:

Frustrated. The only word I can bite my tongue to say right now. I tell u what, Big Guy giving me one hell of a test. He trying to see if my faith in him is real. No worries it is. Always has been.I believe His test will be over soon. I pray it is bc I'm going nuts over here lol, frustrated to no end, but they can't break me. No 1 can!

The way MHS handled the situation was still wrong, but they must have known something.  The good news--if you were worried after losing Tim Tebow--is that God still works through the Denver Broncos.

2. Funny Manning-related bit:  Former Eagle Asante Samuel told ESPN he had been providing his Atlanta Falcons teammates tips on what Eli Manning gives away before the Falcons played the Giants today in Atlanta.  That worked out pretty well.

3. According to Chris Mortensen, Roger Goodell was apparently upset at Paul Taglibue's ruling.  Please, Roger, spare us your fake anger at a guy you appointed and who did everything he could to protect you from complete embarrassment.

4. More Goodell News--also according to Mortensen, strong tensions exists between Saints owner Tom Benson and the Ginger Hammer.  Does that actually shock anyone?  Goodell basically cost Benson a year in the life of his football team.  And that translates to dollar$.  When you mess with a man's money, don't expect him to send you Xmas cards, Rog.

6. I'm not the biggest fan of Ronnie Hillman, but even I think this is pretty lame. I guess Kiz had an extra Bloody Mary this morning.

7. Contemplate this week's lesson in randomness.  The Broncos recovered an early Ravens fumble; the Ravens didn't recover a later Broncos fumble.  Swith the two around, and  the complexion of this game is much different.  Randomness is real, and it affects the outcomes of games (and life) constantly.  We rarely have the time to remember this when we're applying historical bias, but it doesn't make it any less true.

8. John Harbaugh had better start watching his back.  His decision to fire his offensive coordinator was one of the first times he's ever had to make a tough call.  After today's result, it's probably safe to assume there will be players who will suddenly question his abilities.

9. Of course, you knew the Colts weren't as good as their record, but one could hope, right?