Raise your hand if you thought the Broncos were in danger with a halftime lead of only six points. 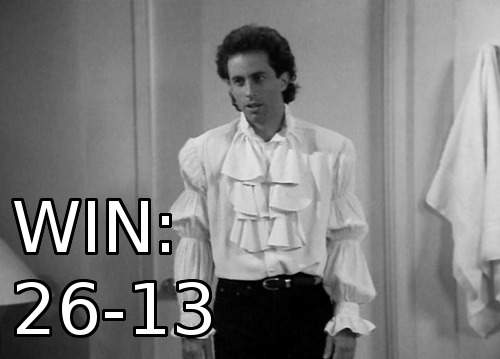 I guess pirates just aren't that frightening anymore--if they ever were in Oakland.

Either that, or this Broncos team is that good.  Even when they play sloppy and sluggish in the red zone, they adjust.  A one-score game quickly turnes into a three-score game.

By the fourth quarter, the Broncos' opponents might as well put on their pirate shirts.

As least then, the attire would keep it interesting.

1. Of course it's easy to beat the Raiders, but it's even easier when they beat themselves with stupid penalties.  For a perfect example, only look to the Broncos' first drive, where a holding penalty gave the Broncos an early third-down conversion.

2. Joel Dreessen blocked like a beast on the Broncos' first drive and was rewarded when he found himself in single coverage with Michael Huff.  Obviously, the two events are not correlated other than there being some sort of karmic justice watching a tight end grind in the trenches and then score.

3. Nothing is more satisfying than watching the Black Hole suck air after Champ Bailey makes them look foolish.

4. Robert Ayers may not live up to his draft position, but come on, Oakland.  Don't even try to block him with a tight end.

5. Peyton Manning took the Raiders apart whether they played Cover 2, free man, or blitzed, leaving defenders in man coverage.  How did he do it?  It's all in how you read the safeties, my friends.

6. How much confidence does Manning have in Demaryius Thomas?  Enough to frequently throw into bracket coverage.

7. It's not often we mention Steven Johnson's play on special teams, but when you solo someone on a kickoff, you deserve a little mention.

8. In the absence of Wesley Woodyard, Danny Trevathan, Keith Brooking, and D.J. Williams picked up the slack.  Trevathan, in particular, brought the leather.  If you have a chance to watch the third quarter over again, don't watch the ball.  Watch how Travathan played the run.

10. You'll never see a safety drive on the ball better than Rahim Moore's near interception during the second quarter--never ever.  Never ever ever?  That's right.

11. The demise of Eric Decker has been greatly exaggerated.  And let's stop with this lazy equation: Eric Decker = white wide receiver = possession guy.

13. It's not going to show up in the stat sheet, but Derek Wolfe had one of his better games tonight.  Therefore, I expect Pro Football Focus will give him a negative grade. Justin Bannan--who is flying under the radar this year--must be rubbing off on him.  Bannan has an underrated swim move that he wields from time to time--usually during critical plays in the game.

14. Khalif Barnes stayed with Von Miller for about a quarter.  After that, Miller did everything but point and laugh.  How Miller is not the Defensive Player of the Year is beyond my mental capacity (which isn't saying much, true).   As Ted said during our in-game chat, the only comparable to Miller is Lawrence Taylor.  Derrick Thomas couldn't defend the run the way Miller can.  Miller is quick--with power.

15. John Fox's respect for Dennis Allen. Fox could have gone for the score with two minutes left in the game.  Instead, the Broncos took a knee.

1. Obviously, the Broncos had some problems sliding their protection tonight in the first half, but let's give the Raiders some credit.  They disguised their blitzes well, especially off the corner.  Against Peyton Manning, though, that only works for so long.

2. Everyone together now: settling for field goals keeps the other team in the game--unless you're playing the Oakland Raiders.

4. Marshall Faulk brought up a good point: the slick field and lack of footing did not help Von Miller and Elvis Dumervil off the edge.

5. Let's admit it, Broncos fans--punching the ball in with the running game is a bit harder without the services of Willis McGahee.

6. I know, we sound like a broken record.  And yes, I know, I just said the Broncos are missing Willis McGahee.  But that doesn't mean we'll let up on John Fox for not going for it on fourth-and-goal from the Raiders two-yard line.  Lucky for Fox, Von Miller turned into Gumby a series later and bailed the questionable decision out.

7. We haven't been down on Orlando Franklin for too long, and we hesitate tonight, but since sacks have been rare this year, we'll simply note Franklin's error in not blocking to the inside on Manning's first sack.

8. I'm not saying there's a correlation here, but have you noticed that when Manny Ramirez is in the lineup, it seems like the Broncos give up more pressures and sacks? With Chris Kuper starting, Manning has been sacked four times in six games.  With Manny?  15 times in seven games.  Of course, Zane Beadles and Dan Koppen deserve their share of the blame, too.

9. Yeah, Champ Bailey got juked for a big gain by Darren McFadden, but in his defense, he was coming off the corner very hard.  It's not exactly an easy play to make.  It's a negative, either way.  Can you see how much pain it gives me to say anything negative about Bailey?

11.  In a related note, Champ Bailey said it best immediately after the game:  "We have to do a better job of finishing."

1. Rich Eisen has to keep the game interesting for viewers.  I guess that's why at halftime he said something like the following: If Champ Bailey wouldn't have intercepted Carson Palmer, the game might have been closer.

2. Michael Irvin correctly pointed out that the Broncos are insanely good with second-half adjustments.

3. John Madden was reading something from the pressbox.  We were trying to figure out what.  Ted's guess?  The Silver Surfer.  Mine? Punisher: War Journal.  I know, I know.  You're surprised a former Raiders coach actually reads anything.

4. If the rumors of A.J. Smith's departure are true, I can only say one thing: belated.

5.  Here's an interesting theory you should check out in the next few days if you have NFL Rewind.

6. I wouldn't exactly say Matt Prater crushed it tonight, but at least he made his field goals.  Now, let's hope he stays out of his own dish for the rest of the season.

7.  Did you notice the Raiders played bracket coverage against Mitch Unrein at the goal line?

8. Both teams experienced some footing issues tonight.  If all Broncos fans chipped in a few cents, could Eric Decker afford some longer spikes?

9. Ted and I have a running joke.  When Trindon Holliday fumbles, Ted gets to be right.  When Holliday brings a kick back, I get the honor.  It just goes to show easily Holliday can take your breath away--either way.

10. I'm going to pray to Tim Tebow's god that the Ravens play into overtime this weekend--that, and that the Jets release Tebow soon.  The Broncos could pick him back up for some goal-line running.

11. Near the end of the game, watching the Denver offensive line helping push the pile brought a tear to my eyes.  Don't ask me why.  I guess I like watching grown men helping other grown men reach their goal (lines).

12. Can the Broncos run the table?  I told Doug Lee before this streak started I thought it was statistically unlikely.  Oops.