Last year it took the Broncos until Week 17 to win the division. 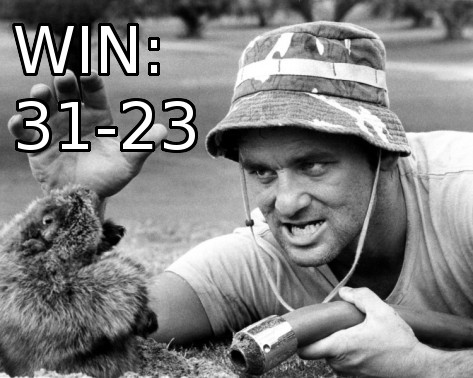 What a bunch of drama queens.

This year, the Broncos clinched the division so fast, there was still time to hit the links.

Okay, how about a seven-game winning streak?

1. Of course the Broncos went no-huddle early in the game.  Why wouldn't they?  If you were facing E.J. Biggers (seventh-rounder) and Leonard Johnson (undrafted), would you give them time to catch their breath?  Unfortunately, penalties hurt the no-huddle just as much as they do a standard offense.

2. You can't stop Mitch Unrein.  You can only hope to contain Mitch Unrein--at least when he's playing fullback.

3. Demaryius Thomas does his job, no matter what it is.  If you watched his blocking today, you know that part of the reason Knowshon Moreno broke some big gains was because of Thomas's blocking.  Thomas then went on to pretty much catch every type of route in the tree on his way to 99 receiving yards, and he even beat bracketed double coverage in the red zone on his second touchdown catch.  The route was simply poetry.

4. Britton Colquitt had one hell of a game.  Unfortunately, the Broncos failed to take advantage of the great defensive field position until the second half of the game.

5. After an average game last week, Von Miller returned to his usual self.  I have to admit, though, I never expected a pick-six interception.  Just add it to his Defensive Player of the Year resume.  How often can a quarterback take a three-step drop and get hit when delivering the ball?  Only when playing Von Miller.  Also, if you didn't notice, Miller held Doug Martin without a catch in the flat in man coverage from time to time.

6. Kevin Vickerson--I was all wrong about you last year.  Just find me that crow, big boy.  The rest of the Broncos defensive line played well too (Derek Wolfe, Justin Bannan).  Did I mention Mitch Unrein?

7. It was inevitable--Peyton Manning broke the Broncos' single-season touchdown record today held by both John Elway and Jake Plummer.  Manning's play is so good, it's almost a shock when he completes less than 70% of his passes.  He's usually good for one bad decision a game, but he usually makes it while he's going for the jugular.  I can live with that.

8. Another great game from Tony Carter and Chris Harris.  I tend to mention them as a pair because the Broncos play so much nickel defense.  One might mistakenly get the impression Harris was beat early for a long pass, but it's the exact opposite.  He was expecting safety help to the inside on the route.   Carter and Harris are the guys who allow me to take Champ Bailey for granted.

9. If you ever needed a lesson why stats need context, take a look at Tampa's top-ranked run defense.  You can say they are stout against the run.  Or you can go the other way and say that their pass defense is so bad, it's hardly worth running.  We know from applying the context of today's game that it's the latter.

10. It looks like this guy Trindon Holliday is gonna stick.  The dude may be smaller than Tom Cruise at 5-5, but if Cruise can be an action hero, Holliday is good for a few more touchdown returns.  He ought to be fined, however, for letting a linebacker tackle him from behind.

11. I had to add one more bullet here for Elvis Dumervil.  Because of the emergence of Von Miller, Dumervil often gets overlooked (often by me), but make no mistake: Dumervil gets to the quarterback, usually in the form of a hurry.

12. I should say the same about Jacob Tamme.  I often overlook him.  But without Brandon Stokley in the lineup, Tamme became even more of a security blanket for Manning.

1. The first half was completely disjointed; it hardly felt like a game at all.  The main culprit?  Mental errors, dropped passes, and penalties.  The Bucs played two deep and dropped their linebackers into the middle zone.  The Broncos countered with short crossing routes, but needed to attack to the outside-middle of the field and to the flats.  In the second half, they finally got the message.

2. A good example of this was the Broncos' second drive.  It started with an Orlando Franklin facemask on an ugly screen pass and ended with a botched snap.  The Broncos are just lucky they managed to get the punt off.   Some drives are just better when they end.  Otherwise, something bad happens.

3. It's hard to call Von Miller out for his personal foul on Josh Freeman, so I won't. I'll simply say that making rules for Tom Brady have unintended consequences.

4. John Fox played for the status quo at the end of the first half (punting), and he got exactly that--the status quo.  The result was the expected Broncos deficit going into the half.  To end the game, Fox and Mike McCoy decided to run the ball straight into the dirt and gave the Bucs a second life.  Luckily for the Broncos, they recovered the onside kick.

5. The Broncos safeties aren't going to like their tape when they watch it next week--especially in the first half.  Rahim Moore missed numerous tackles, allowed Doug Martin to truck him, and otherwise overran a lot of plays.  Mike Adams, for his part, bit on play action and allowed one long gain over the top.

6. Yes, Doug Martin is awesome.  Yes, I wanted the Broncos to draft him.  And yes, I believe the Broncos could have drafted both Martin and Derek Wolfe had they wanted to.  Yet, even I know that I need to park my confirmation bias at the door.  It's simply a mistake to take what Martin is doing in another system, in another situation, and try to apply the same context to the Broncos.  What if Martin were to get injured next week?  Would the Broncos then be considered geniuses?  Of course not.  All of us are guilty of confirmation bias to one extent or another, but we've got to guard against it. Otherwise, I'd fail to admit that Ronnie Hillman had some decent runs today.

7. The good news?  The Broncos no longer face Vincent Jackson twice a year.  The bad?  They had to face him today.  Part of the reason Josh Freeman has been able to move on from his sophomore slump is simply due to VJ's presence.  In a related note, we'd like to give thanks to A.J. Smith's hubris for driving Jackson from San Diego. To be fair, Jackson hardly hurt the Broncos today.  But I'm always looking for a reason to blast A.J. Smith.

8. Despite the big win, the Broncos still committed eight penalties.

9. Is Matt Prater still a great kicker, or is the law of large numbers catching up to him?

10. Given the score, is it okay to point out some of the recent struggles of Dan Koppen?

1. Congrats to the Kansas City Chiefs for winning in the face of their recent tragedy.  It won't matter in 24 hours, but hopefully, it provided the team and coaches with some sort of short-term emotional release.

2. The New York Jets deactivated the Ultimate Teammate™ today against the Arizona Cardinals, but don't take off your promise rings just yet.  Think about it--it gives Tebow an extra four hours to bone up on The Book of Job.  Why do the righteous suffer while the evil go on seven-game winning streaks?  I don't know, but I bet it has something to do with playing for Rex Ryan.  Making things worse is that the Jets finally benched Mark Sanchez, but replaced him with Grey McElroy.  Coincidence?  No.  And--wait for it--all Greg McElroy does is win.

3. While D.J. Williams has been very business-like in his return to the Broncos, it's not been enough for them to make any changes to their starting lineup.  For as much grief as we pile on Williams here at IAOFM, we applaud the way he's handled himself since coming back.  If it ain't broke, as they say.

4. Here's a question for your consideration:  if the homicide-suicide tragedy had involved a high-profile player (think superstar), would Roger Goodell have cancelled a game?

6. Don't count me among the guys who will criticize Robert Ayers for not playing this week.  There are more important things than football.

7. Jeff Legwold says the Broncos had Doug Martin high on their list during April's draft.  Yeah, yeah, Legwold.  We get it.  If I have to hear the words "muscle hamster" one more time, I'm going to take the next hamster I see and kill it on the spot.

8. I know most Broncos fans will gravitate to Karl Mecklenburg and Terrell Davis as it relates to the Hall of Fame, but sign me up for Steve Atwater.

9. My buddy Doug Lee used the word coccyx during today's game.  I thought I'd let you know.  The last time I used that word in a sentence, someone had landed on my sacrum.

10. Lost in the shuffle of today's game was the injury Wesley Woodyard suffered to his ankle.  Danny Trevathan played well in his absence, it should be noted, but let's hope Woodyard's injury isn't serious.