Kansas City ain't what it used to be. 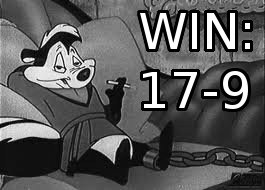 The smell?  The stench of Scott Pioli and Romeo Crennel.

Sure, the Broncos struggled throughout most of the game.  And earlier in the week, Peyton Manning put on a straight face and said the Chiefs were a tough out.  At one point, he even said, "They've got a lot of good players."

As it turns out, Manning was right, but not correct enough for the Broncos to actually lose to a bad team.

You see, good means very little when you're 1-10, without a solution at quarterback, and you're coaching not to lose.

1. You have to love Romeo Crennel. For whatever reason, the Chiefs tried a trick play during their first drive of the game on third-and-three, letting Peyton Hillis pretend he was a quarterback.  Up to that point, the Chiefs had been tunneling the Broncos defense.  But leave it to Kansas City to take what had been working and break it.  In a related note, Tim Tebow could have thrown a better pass than Hillis--right-handed.

2. Continuing the madness, the Chiefs kicked a field goal on their second drive when facing a fourth-and-two from the Denver four-yard line.  The Chiefs were 1-9 going into the game, and Crennel was kicking field goals on fourth down inside the red zone.  In this league, everything adds up, and coaching decisions are no exception.  What could have been a 14-0 Kansas City lead turned into a 7-6 deficit at halftime.  Not that you need a reminder, but Peyton Manning can split a six-point lead faster than Tim Tebow can a football organization.

3. I simply need another point to continue to thank Romeo Crennel for his incompetence.  If he wasn't burning useless timeouts, he was punting when he should have gone for it during critical times of the game.  Over the coming week, pundits will praise the Chiefs for staying in the game, but the truth is they stayed in the game despite all of Crennel's questionable decision-making.

3. Knowshon Moreno came to play today.  No, he's not Willis McGahee, but his legs were fresh, he brought out the stiff arm, ran with two hands on the ball and with some authority, caught the ball out of the backfield, and did the most important job, which was picking up the blitz.  A 4.3-yard average ain't bad, either.  After the game, Manning called Moreno "a pro."  We couldn't agree more.

4. Early in the game, Mike Adams singlehandedly kept the Broncos defense in the game.  It was a great job by Adams to rip the ball out of Peyton Hillis's hands on the first drive of the game, even if Hillis was subsequently (correctly) ruled down.  Hillis isn't exactly the Rock of Gibraltar.  The second quarter wasn't even half over and Adams already registered seven tackles.  That doesn't say a lot of good things about the way Denver was playing up front, but it does say plenty about Mike Adams.

5. I'm not sure if you heard it here first or not, but it's worth noting that David Bruton is having an amazing year as a special teams player--we're talking a Pro Bowl-type of year.

7. Tony Carter, Chris Harris, Champ Bailey--take your pick of badass corners.  If you use a blindfold, the results will be the same.

8. In previous weeks, I've neglected to praise the Broncos' coverage unit, which has been one of the tops in the league this year.   Coming into the game, Denver's opponents were, on average, starting their drives at the 25-yard line.  This was eighth-best in the league.  Never was this more evident than in the fourth quarter.  As the Chiefs crept ever closer in field position, it was absolutely critical to limit return yards.  Thankfully, the Broncos did just that.

9. Peyton Manning uses all of the play clock for several reasons, but primary among them is so defenders give away both leverage and their blitzes.  Then he adjusts the pass protection accordingly.  Denver's last third-down conversion was as much a matter of pass protection as it was Demaryius Thomas's route.

10. Speaking of Demaryius Thomas, his route running has improved tenfold since last year.  His ability to separate is now gravy.

Honorable Mention: Eric Decker, Virgil Green (special teams), Trindon Holliday, Derek Wolfe, Rahim Moore, Brandon Stokley (it's a crime to be so good at his age), Wesley Woodyard (another thousand tackles in the game), and the Broncos' four-minute offense.

1. Matt Prater's first field-goal attempt was something, I just don't know what.  The laws of physics still apply to field goals, don't they?  His second attempt was an overcompensation for his first.  Is Prater now inside his own dish?  His third attempt, although a short one, said otherwise.  My advice for Prater?  Tantric Meditation.

2. I finally saw a play in which Von Miller failed to set the edge. It was the fourth play of the game.  Mark it down, for it may not happen again.  A few plays later, Elvis Dumervil decided to join the club.  Miller didn't play particularly well today.  Sure, he got another sack, but he was pinned inside too often for his own (or the Broncos') good in the game.  In fact, one could say the same about all of Denver's ends, including Robert Ayers.

3. I'm not sure what Peyton Manning was thinking throwing into double coverage on his interception.  He's Peyton Manning, though, so I'll give him the benefit of the doubt.  In another universe, it was a dumb move to throw into bracket coverage.

4. If you peel back the layers of the Chiefs' losing season, they were ranked (coming into the game) fourth in the league in rushing the football and ninth against the pass.  So their record really was a little suspicious.  Manning certainly faced more pressure than normal today.  The Chiefs also did a decent job of coverage.  While I'd like to place the blame on Ryan Clady and Orlando Franklin for the sacks Manning suffered, they were simply a reflection of coverage.

5. Wesley Woodyard has been a beast for the Broncos this year, but if we're being honest (and we hope we are), Woodyard's personal-foul penalty was a dumb move.  Despite his protests to the contrary, Woodyard knows it.

7. Even Double-D (Dan Dierdorf) noticed the Broncos' peculiar strategy of playing a nickel defense against the Chiefs' two-back set on first downs.  I guess they really wanted to get D.J. Williams into the game.

8. Britton Colquitt was outplayed by his brother.  The good news is that there will be a rematch.

9. I'll have to check the film later this week, but at first glance, I don't think Zane Beadles or Dan Koppen played particularly well today.  Admittedly, though, it's hard to judge a lineman without the use of extensive replay.

10. Brady Quinn actually played rather well--certainly well enough to win the game.  He took what the defense gave him, didn't force anything, and outside of one play, threw the ball away when it was required.  The problem for Quinn is that his team didn't ask much of him. You have to give Quinn one thing: he looks like a quarterback.  If I were starting a comic book about a superhero who also happens to play quarterback, Quinn would be my first choice.

1. Knowshon Moreno had a lot of reasons to be motivated today, but one reason in particular--his future team--was particularly pressing.  Randomness influences our lives in a lot of ways, but up until last week, Moreno was heading to the scrap heap with likely little demand for his services.  An injury later, and after his play today, teams are going to pick up the phone should the Broncos decide to part ways.

2. Jack Del Rio said this week that Von Miller reminded him of Derrick Thomas in his ability to finish plays off.  What he meant of course, is that it's one thing to get a sack or two--hell, any guy off the bus can get a coverage sack--but it's an entirely different degree of magnitude to strip the ball while doing it.

3. How bad are the Chiefs?  They almost started Russ Hochstein at center.

4. Along with San Diego's A.J. Smith, Scott Pioli is a cartoon character representation of the modern general manager.  Scott, there are two kinds of people in this world.  The first kind are humble.  The second are about to be humbled.  Actually, there's a third kind, and you're it: someone who doesn't realize he's been humbled in the eyes of the world.  There's another name for guys like this.  They're called assholes.

5. Tracy Porter was a healthy scratch over a banged-up Omar Bolden.  Is it possible that Mile High Sports was right all along?  Whether Porter has attitude issues or not, the fact still remains - the way it was handled by MHS was brutal.  At this point, it's all moot anyway.  Porter won't be a Bronco next year.  The Broncos aren't going to break what's not broken--namely, Chris Harris and Tony Carter.  It appears Elway and Co. (and yes, perhaps even Brian Xanders) were correct all along in giving themselves flexibility by signing Porter to a one-year contract.

6. Looking for perennial fan favorite Jeremiah Johnson today?  He's currently not on the team after being released from the practice squad (he's a third-year player).  Right now, anyone in the league could sign him.  Interestingly enough, he's commanding less interest around the league than an auction for the quarterbacking services of Tim Tebow.  If you were looking for a signal as to the future of Johnson in the league, you have your answer.  What about his future with the Broncos?  The fact that he was on the practice squad in the first place tells you all you need to know.

7. Who will the Chiefs draft with the #1 draft pick in April?  Who cares.  Whoever they draft will probably be injured by this time next year, anyway.

8. The funniest line from Von Miller during the week undoubtedly came from his interview with CBS. Regarding Champ Bailey, he said:  "He used to watch his games on VHS tapes."

9. Told off the record to 104.3 The Fan's Brandon Krisztal earlier in the week regarding Hillman: "Number 18 just doesn't trust this guy yet." The good news is that Hillman is just 21 years of age, so there's time.

10. I actually heard Peyton Manning call audibles at the line of scrimmage.  That's how many empty seats there were in Arrowhead Stadium. But you can hardly blame Chiefs fans for not showing up.  How else are they going to get Scott Pioli canned?