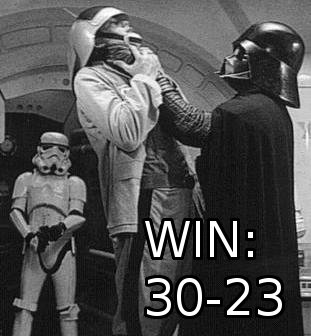 The Broncos got the AFC West in a strangehold, baby.

You best get outta the way.

The Broncos took care of business. They handled the San Diego Chargers (don't let the final score fool you). They now own a three-game lead.  And finally, they've taken two straight from Norv's kids.

Now it's on to the rest of the AFC.

1. Let's get this out of the way right now: Von Miller affects the outcomes of games like no Broncos defensive player has in the history of the franchise.  Solomon Wilcots compared Miller to Derrick Thomas and Lawrence Taylor, but that's old news -- the Wisdom of Solomon always is.

2. Wesley Woodyard = All Pro.  Tell me you weren't thinking the same thing.  For what it's worth, Woodyard now leads the Broncos in both tackles and interceptions on the year.

3. Chris Harris on Eddie Royal is like tar on asphalt.

4. Rahim Moore trained like an MMA fighter in the offseason and it shows.  His rear naked choke has probably improved.  As a side benefit, so has his tackling.

6. Each time Demaryius Thomas catches a smash route, I half expect him to take it to the house.

7. The biggest move that still flies under the radar?  John Elway's signing of Dan Koppen(hagen).  Koppen may not blow people away with his physical prowess, but without him, the Broncos aren't nearly as good.  Outside of one bad mental error today (not recognizing a stunt), Koppen continued his workmanlike play.  And truly, for the most part, the offensive line continued its stellar play.

8. Just when I was about to question Eric Decker's role in the game plan, he goes and gets himself another touchdown.

9. Something got into the water Robert Ayers has been drinking.  I don't care what it is, but I wouldn't mind a swig tonight.  In an unrelated note to my boss:  I'll be seeing you on Monday morning to talk about that raise.  Ayers looked a lot more like a first-round draft pick and a lot less like the guy we've seen cycle through multiple defensive coordinators.

10.  The 12th Man was epic today.  You can trace two of the Chargers' penalties on critical drives to crowd noise drunkenly intelligent Broncos fans.

1. How classless is Philip Rivers?  On the first series of the game, Rivers started trash talking not a player, but John Fox.  Great work, Phil.  Just keep throwing into those zone coverages, bro.

2. Randomness happens (see further below)--tipped passes, balls hitting the uprights, fumbles lost, and balls a few inches from wide-open wide receivers.  In hindsight, these will all be things sportswriters will ignore when they talk about the Chargers controlling the game in the first quarter.

3. Peyton Manning didn't play particularly well today.  He took a safety.  Many of his passes were offline, overthrown, or otherwise difficult to catch--specifically in the first half.  And when he called a timeout because he wanted to prevent a ten-second runoff before halftime, it turned out to be the wrong call.  By most standards, Manning played just fine.  By his own, it was average. If you don't want to take my word for it, listen to his post-game interviews.

4. John Fox should have gone for it on fourth and one near midfield early in the first quarter.  Worse, he chose Lance Ball as the instrument of success on third down.  And don't get me started on his decision to kick the field goal on fourth and one in the second quarter.  Fox may be a player's coach, and he may be one of the primary reasons Peyton Manning chose Denver, but one thing he is not, is wise when it comes to going for it on fourth down.  I can't even abide with his call to kick a field goal in the fourth quarter to put the Broncos up by two scores.  My rationale?  I don't believe the WPA (winning percentage added) or EPV (expected points value) were increased by kicking the FG.

5. How obvious is a running play on 2nd and 10 these days?  It's so obvious, even my third wife knows when it's coming. What were the first two doing?  One was ghostwriting this Gut Reaction.  The other was covering my eyes during Matt Prater's field goal attempts and Trindon Holliday's punt returns.  It takes a village, y'all.

6. Speaking of Holliday, he's a game changer--not always in the way you'd like, either.  A word to Holliday: even one-trick ponies have to catch the ball.  If we could only combine Jim Leonhard's brain and hands with Holliday's legs, we'd have something resembling Gale Sayers.

7. Heard from the mouth of Doug Lee before the start of the second half: "Watch the onside kick."  I have to hand it to Norv Turner.  That was completely outside of his DNA, and it just shows you how much the game meant to the Chargers.  Eventually, it worked, too.  The safety Manning took can be directly linked to that decision (and the Broncos' lack of hands).

8. I again question why Knowshon Moreno is inactive.  Ronnie Hillman makes his money as a change-of-pace running back.  And Lance Ball just makes money.  When Willis McGahee went down with an injury, the Broncos running game ground to a halt.

9. Sometimes even Champ Bailey gets beat on the deep ball; it's sad, but true.

10. Just when I was going to give Manny Ramirez some serious praise, he goes and gets pwned a few times late in the game.

1. One thing that got lost during the mic up of Peyton Manning last week was the degree of intensity with which Brock Osweiler listened to and studied the elder QB.  Drafting quarterbacks -- and let's face it, drafting in general -- is as much random luck as it is skill, but one thing you have to credit the Broncos with is drafting someone who wants to put in the work on the mental side of the game.  At this level, talent is generally not the issue - mental capacity is.  The history of the NFL is littered with the casualties of highly talented quarterbacks that never recognized that very point.

2. If this doen't make you swell with pride, nothing will.  This morning on ESPN, IAOFM patron saint Tom Jackson had this to say regarding the recent trend of team legends criticizing current players of the same team:  "I want Von Miller to be the greatest outside linebackers in Broncos history."

3. Philip Rivers had the audacity to say to Chris Harris last year, "Go back to Arkansas, you (reeking) rookie," despite the fact that Harris was from Kansas.  To that we reply, "Phil, go back to Georgia, you slow, washed up stiff." (Note to Raiders fans: Rivers is from Alabama).

4. It will be another week of pure hell for fans of The Ultimate Teammate™.  Mark Sanchez played well enough to win today, and what do you know?  The Jets won.  As a side note, the Rams finally got the memo that Tebow isn't in the game to protect punts as the Jets punt protector.

5. Dan Marino's sad face?  That makes me happy.  The guy has been overrated since 1983.  When you hear debates about the greatest quarterbacks of all time and someone hits you with some verbal garbage about Marino's stats, just remind them that most of Marino's statistical success came before the advent of the zone blitz.  Remember, Marino was described by Dick LeBeau as the one quarterback who had the most trouble with the defensive innovation.

6. Last week I told you I was rereading the book The Drunkard's Walk: How Randomness Rules Our Lives."  In the last chapter, I found this gem on success: "What I've learned, above all, is to keep marching forward because the best news is that since chance does play a role, on important factor in success is under our control: the number of at bats, the number of chances taken, the number of opportunities seized.  For even a coin weighted toward failure will sometimes land on success."  In short, life is a roll of the dice.  So blow on those dice (or don't, it doesn't matter) and roll -- a lot.

7. Willis McGahee decided against warping space and time through the use of an awesome triple negative during his pre-game interview.  Instead he made fun of himself and said the Broncos needed to "stop turning the ball over...lesson learned."  McGahee went on to say his turnovers happened because he was simply being careless with the ball.  Who can't relate to McGahee, though? Sometimes I find myself getting a little careless watching The Real Housewives of Rio De Janeiro and end up with a big mess on my hands.

8. The Bengals treated the Chiefs like a dog's squeaky toy in one of the early games.  I vote we just add two more wins to the Broncos' record and skip the games. Why risk injury? Speaking of the Chiefs, their play is actually causing deaths within their fanbase.

10. The only part about this win that's better than the beginning of the end of Norv Turner is that A.J. Smith will follow quickly behind (if his head fits through the door).