Two roads diverged in a wood. 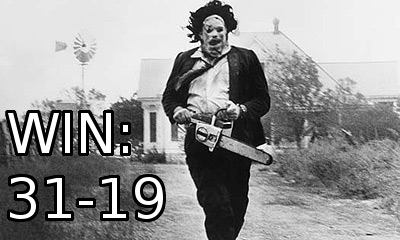 I took the one Tracy Porter traveled by.

And that made things completely awesome.

There was this other guy named Peyton Manning, of course.

He got his 400th (and 401st) career touchdown pass as a Denver Bronco.  He also took a no-huddle chainsaw to the forest of Steelers defenders and cut his own path.

The deafening sound you heard wasn't the chainsaw, though.  It was the sound of 76,823 maniacs screaming their team to victory.

1. For a guy as old as Brandon Stokley, he gets out of his breaks like he's pulling fast-twitch fibers.  I'll have what he's drinking.

2. Derek Wolfe won't blow you away with any measurables.  Measurables can go to hell.  Sometimes a spoonful of keep your motor runnin' makes the quarterback go down--in the most delightful way.  If you're into thanking John Elway--and I know you are--go ahead and thank him for drafting Wolfe.

3. Speaking of linemen, I thought the defensive line battled their collective asses off tonight.  With Ty Warren out early, Mitch Unrein, Wolfe, Justin Bannan, and Kevin Vickerson had to unleash.

4. Altitude is a BITCH; the hurry-up offense is IN.  Activate them together and it's bitchin'.  As Doc Bear and Ted Barlett pointed out to me during the game, the Broncos could do this the entire game and gas their opponents.

5. Demaryius Thomas is a Pittsburgh nightmare.  Even scarier is Thomas's stiff arm on Troy Polamalu.  Polamalu got a taste of his own medicine for once.  Later in the game, Polamalu wanted no part of Thomas in the blocking game.

6. Smartest move of the night?  It had to be when Jack Del Rio put Mike Adams instead of Wesley Woodyard on Heath Miller.  Rinse. Repeat.

8. Von Miller on the edge or Von Miller up the gut?  I'll take two lumps, thanks.

9. Continuing with Miller--when he gets his hands extended, he can stack and shed with the best in the game.  His run defense is severely underestimated.  His Tebowing?  Well, that needs some serious work.

10. We save the best for last. Peyton Manning worked his ass off to be here tonight as the quarterback of the Denver Broncos--really, to be back in football.  There were no lights, no cameras, and no media interviews during the darkest days.  Some said he'd never throw again.  No one will ever truly know how hard Manning had to work to get back.  One marvels at this kind of work ethic.  It's not the sort of stuff you read about in self-help books, or hear about on sports talk radio.  It's the real thing.

1. Tony Dungy is right.  Why the hell did John Fox (or Mike McCoy, for that matter) wait twenty minutes to allow Peyton Manning to be Peyton Manning?  Someone forgot to tell them they signed Professor X.  Stop with this two-back, huddled garbage.  Let loose the hounds of the 113.

2. It doesn't matter how good Jack Del Rio and his defense play this year.  When you stay out on the field as long as they did tonight, you're going to miss tackles, you're going to be slow in your zone, and you're going to get gassed.  Del Rio got unlucky, but he also could have brought more pressure at times.  Late in the game, he realized the mistake and brought more blitzes.

3. For a lesson in how random stuff just happens and affects the outcome of football games, see Willis McGahee's fumble in the first quarter.  Sure, McGahee could have covered the ball better, but it's also hard to account for someone attempting a whirly-whirl as a form of tackling.

4. Here we go again: the replacement refs suck eggs.  They were calling the game looking through straws.  The bird's eye camera showed several occasions when the replacement refs weren't just bad - they were completely out of position to make a call either way.  Here's a tip: when the play clock reads "00," Ben Roethlisberger isn't allowed to call a timeout.  It's a penalty.  I could go on and on, but what's the point? Can the brutal call on Rahim Moore be any more wrong?  How many non-calls in the Steelers secondary did we see?  Finally--aw, hell, where is Ed Hochuli?

5. I'm not a fan of running the ball when you are backed up against your own end zone.  The expected point values just don't support that strategy.  It almost always guarantees your opponent an eventual field goal.  I would have liked to have seen the Broncos take a shot, especially with the Steelers putting nine defenders in the box.

6. Ben Roethlisberger moved ten times better in and out of the pocket tonight than he did in last year's playoff game.  He's also got one of the best pump fakes in the game.  Ask Joe Mays.  He'll tell you all about it.  I know a lot of criticism is going to be heaped on the secondary after tonight's game, but Big Ben is one of the best quarterbacks in the game for a reason.

7. Speaking of Mays, let me see if I can come up with another way of saying it this week: in a hallway the width of a janitor's closet, Joe Mays just made the Hall of Fame.  Unfortunately, the width of a football field is slightly larger.

8. Ty Warren can't catch a break--unless we count his bones and tendons.  He spent most of the first half on the sideline and the second half in the locker room injured.

10. What happens when you can't get off the field on third down?  Pittsburgh possesses the ball for 14:24 of the third quarter.  That's right.  Peyton Manning sat on the bench for almost a whole quarter.  I'm not saying it matters in the final score, but I am saying my heart feels cheated.

Who the Heck Knows

1. Whether you believe it or not, John Elway said on the pregame show that the reason the Broncos didn't sign anyone off of waivers is because there wasn't a player on the wire who could beat out anyone on the Broncos' 53-man roster.

3. John Elway told Dave Logan that right now, he has no clear-cut idea on what they are going to do when D.J. Williams finishes his suspension--he prefers to see "how things play out."  Translation: if we're comfortable with our linebackers in the first six games, D.J. Williams is dead to us.

4. I would have liked to have seen Malik Jackson activated for tonight's game.  He's my new man crush (sorry, Unrein).

5. Nothing is worse than a Bob Costas halftime monologue.  Well, maybe a Bob Costas monologue on the virtues of Tim Tebow is worse, but that's double-dipping.

6. Watching the Chiefs get torched by the Falcons at home? Fruitful.

7. Sometimes Troy Polamalu goes completely off script.  In other words, there's a defense that's called, then there's the defense Polamalu plays.  Sometimes they are not one and the same.

8. In the self-published book by John Elway entitled Getting to the Super Bowl, it states in the first paragraph: "A team should go 7-1 or 6-2 if they want to get home-field advantage."  In the second paragraph it says: don't hire Dan Reeves.

9. After seeing Wesley Woodyard notch 12 tackles, D.J. Williams is dead to me.

10. If you ever needed a lesson in why time of possession doesn't correlate to winning as much as other markers, you got your answer tonight.  Efficiency matters more than the raw length of time.