No Von Miller? No Champ Bailey? 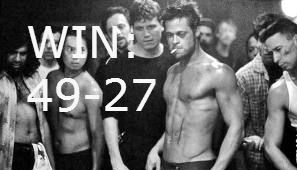 We’ve been telling readers for weeks now that as Peyton Manning goes, so do the Broncos. We gesticulated the notion that with Wes Welker, the Broncos were going to score more, not fewer points. What we didn’t tell you was that Peyton Manning would be on pace for 112 touchdowns.

Okay, I’m getting a little carried away now, but you get the drift. Bring me a team that puts up 30 points a week, and we can have a discussion about the Broncos losing a game. Otherwise, John Fox is keeping his foot on the gas this time.

Lay it down, Broncos fans. What were your impressions of the game?