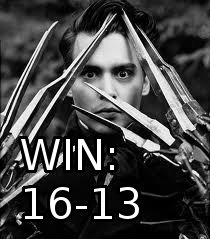 We can move on to more important things--like destroying the Pittsburgh Steelers.

Before we do, though, let's take some time (just a little) to comment on tonight's game.

1. Knowshon Moreno needs to run angry.  When he does, he's a competent NFL running back.  If you are wondering if Knowshon is on the bubble, don't.  Elway during the game: "Knowshon knows what we are trying to do on third down."

2. Most humans get better with experience (and now with Viagra, this is even more true).  This rule does not apply to the replacement officials.  When will Ed Hochuli turn green and end this thing?

3. Caleb Hanie puts the "A" in average.  The IAOFM crew were talking during the game and we all agreed the Broncos would need a pretty strong showing from the running game and defense if Hanie has to play for long stretches of the season.  Hanie took several unneccessary sacks tonight, and it was easily the worst game of his preseason.  Would it shock you if Hanie gets cut tomorrow?

5. Peyton Manning didn't play a down tonight, but how bad ass was it to see a shot of Manning and Decker on the sideline going over still shots from the game?  I'll save you the time.  It was completely and utterly without question the badass-est thing you could see without watching Manning play a down.

6. Danny Trevathan found the cheat code and put himself in God Mode tonight.

8. Omar Bolden = Broncos kick returner.  I don't care if it's preseason or not, you take a kick back 103 yards, you just solidified your spot.  And, as Ted Barlett mentioned to me during the game, Bolden is good enough, and playing eight games at home in altitude is not reason enough to seek a dedicated kick returner.  In other words, Bolden is versatile.

9. Robert Ayers needs to play with fire like he did tonight.  Whom shall we nominate to bitch slap him before games?

10. The more I see of Malik Jackson, the more I like him. The lesson for the Broncos?  Let me see more of him.

12. Joe Ellis took some time out of his busy schedule to join Dave Logan and Eddie Mac in the booth tonight.  During this time, he managed to kiss John Elway, Pat Bowlen, and Peyton Manning's asses in the same breath.  Keep on truckin', Joe.  Git-R-Done.  Honestly, I'm surprised the Broncos trot out Ellis at all anymore--even the second half of the fourth preseason game.  He's got that much charisma.

13. Brock Osweiler's footwork was better tonight, despite the interception.  He showed patience in the pocket that he didn't exhibit last week.

14. I think Jeremy Beal messed around and got a triple double made the team tonight.  For what it's worth, Doc Bear liked Ben Garland and Ted liked Jamie Blatnick better than Beal.  Respect the diversity of opinion and move on.

15. Champ Bailey was interviewed on the sideline in the third quarter after the Omar Bolden touchdown.  He said every year you have a chance to win, but this year they just need to take care of business.  Champ hasn't been able to say something like that since 2006.

16. I wouldn't kick Ronnie Hillman out of bed for eating Ritz crackers--especially if he keeps leaving jockstraps on the grass.  I realize the last two sentences sound a little dirty, but what do you want?  It's freakin' midnight, people!

17. Eddie Mac had some odd predictions for who would make the Broncos' roster tomorrow. And I don't know what to say. I...can't...criticize...McCaffrey...will...fight...urge...

19. Philip Blake--for the first time all preseason--anchored like the guy he was on film.

20. Jeremiah Johnson teases me at least once a game.  What should the Broncos do?  Cut him, of course.

21. Jay Feely is no Matt Prater.  Tonight, he wasn't even Jay Feely.

22. I've pondered this question like an existentialist: why doesn't Sealver Siliga rule the world?

23. Eric Decker's stubble is hot enough to steal your girlfriend.

24. Tony Carter is good enough to make this team.  On another note, life isn't fair.

25. It's too bad Virgil Green has to serve out his suspension.  The guy keeps getting better and better.

26. Gerell Robinson made a late surge, but it's not enough.

28. Yes, there was a Quinton Carter sighting. Now, calm yourself.

29. Perhaps Greg Orton and Adam Weber should get game balls for putting the preseason out of its misery.