The Broncos won't win all their games this year. 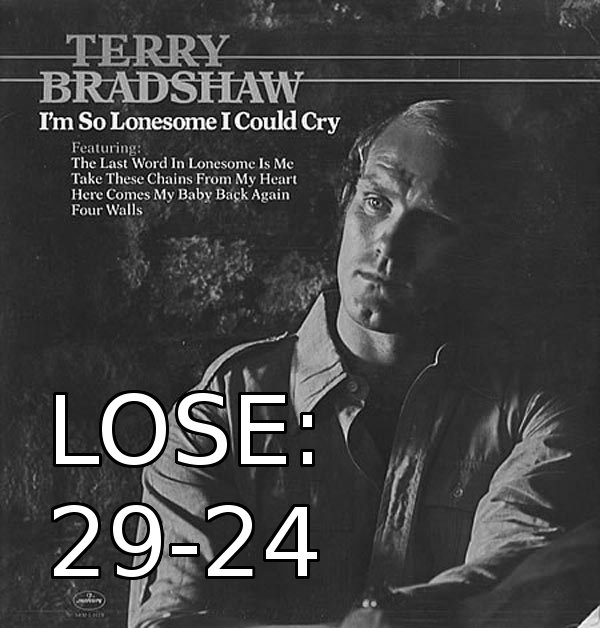 But they'll be in every game.

This afternoon, the Broncos showed their starters can dominate anyone. The 49ers--already crowned the kings of the NFC by the national media, as they kiss the ring of Jim Harbaugh--could barely move the ball against the Broncos' first-string defense.  And Peyton Manning and Co.?  They only shredded the 49ers starters like they were straight out of the Oakland Raiders' prison league.

It's the depth that scares the hell out of me.

The Broncos are only deep at a few positions.  Unfortunately, I can't remember what they are right now.  Let's just hope the the starters can make it through sixteen games and go about our business for now.

1. All of the questions about Peyton Manning's arm strength will disappear after this game.  In short, he was on fire.  His throw to Lance Ball near the end of the first quarter while getting decked was a metaphor for ass kickin'.  He regularly hit his second, third, and fourth progressions; further, he knew where to go with the ball without hesitation (both of Eric Decker's touchdowns).  All you need to know is Manning hit six different receivers on his ten completions.

2. Denver's linebackers got some great zone drops today.  Honestly, the entire defense did a great job in their zones outside of Rahim Moore on the Vernon Davis touchdown.  Another example of the sort of discipline Jack Del Rio brings to the defense this year.

3. Eric Decker was in the right place at the right time, and he ran his routes as precisely as they've ever been.  Decker aside, the Broncos' receivers generated some significant YAC today.  Demaryius Thomas, Decker, and Brandon Stokley all turned short passes into bigger gains.  I'll be the first to admit I didn't think Stokley had any chance of making this team.  I stand corrected.

4. Joe Mays brought the leather(face) again this game.  If we've said it once, we've said it a thousand-million times infinity and beyond: Joe Mays is the greatest north-south linebacker in the history of the universe.

5. Wesley Woodyard is making a case to be a starter at the weakside; I don't care how many clones of Keith Brooking they bring in (see notes on Brooking below).

6. Ronnie Hillman got his first look today and showed the sort of burst none of the other Broncos running backs currently possess.  I still wish the Broncos had drafted Doug Martin, but hey, Hillman is a good 1a.  Speaking of Doug Martin, that wasn't me who you had to call the cops on.

7. I'm not saying I'm a huge fan of Caleb Hanie.  I'm just saying he's the second-best quarterback on the roster.  He started slowly today, but again played well enough to keep his place on the depth chart.

8. Despite the Broncos' lack of defense in the second half, it should be said: Malik Jackson is already outplaying his selection number in the NFL draft.  He's bigger and more versatile than I'd thought (and his tape had showed).  Doc Bear and I were discussing this during the game, but his tape screamed third-down DE.  His play says otherwise.

9. I liked the 212 look the Broncos sprinkled in during the first half.  It's not a look you will see that often, but it's a good change of pace, and allowed the Broncos to do some old-fashioned pounding of the 49ers.  Should the Broncos keep fullback Chris Gronkowski on the roster (and it looks like they will), expect to see this package throughout the year sprinkled into the hurry-up offense as a change of pace.

10. Trying to cut Von Miller and Elvis Dumervil isn't a great plan; they're just too quick and can sidestep the attempt.  The 49ers found themselves the victims of this sort of stupidity at least three times by my count.  One thing Willis McGahee doesn't get nearly enough credit for doing is picking up blitzes.

1. On the touchdown to Vernon Davis, it appeared as if Von Miller was in the correct position with his zone drop to the outside flat.  Rahim Moore appeared responsible for the middle and deep zone to that side of the field.  My quick take is that the breakdown in the coverage is on Moore.  Expect other offensive coordinators to study this play in detail.

2. If you're going to work on your onside kick, I guess the preseason is the time to do it.  If it weren't for Matthew Willis picking up the ball eight yards away (instead of the required ten), it's likely the trick would have been successful. And yet, as soon as I'm ready to beat on Willis for his bad play, he goes and rolls off several catches in a row.

3. Once again the Broncos' first-team defense looked great, and once again the Broncos' second- and third-teamers looked completely average.  Missed tackles, bad angles, and indecisiveness were all too common. Robert Ayers has been an enigma.  Steven Johnson and Mitch Unrein were a pair of bright spots, though. And I don't say that just because I'm the President of the Mitch Unrein is Odin Fan Club, either.

4. Ted Bartlett and I may be the only ones saying this at this point, but here we go again: Demaryius Thomas can still get better on his breaks.

5. Kick returns at altitude = fail.  We're still no closer to knowing who can do the job for the Broncos.

6. Brock Osweiler failed to impress for the second straight week.  The same problems that plagued him last week--lack of pocket awareness under pressure, failure to go through his progressions, and poor pre-snap reads--struck again today.  Andrew Mason thought otherwise, though, so perhaps I saw things differently.  This just in: I'm right.

7. The Broncos' second-string offensive line didn't make things easy on Osweiler, however.  We again saw a lack of depth at all positions along the line, although Manny Ramirez was a bright spot.

8. The replacement officials [insert your favorite sexual act here].  Now, get your mind out of the gutter.  You're about to watch the Jets play.

9. Andre Caldwell was signed to be the slot receiver in Denver.  He's lucky if he makes the roster (which he will, of course).  He looked distracted today.

10. Outside of Decker, Thomas, and Stokley, the Broncos' receivers and tight ends dropped way too many passes and didn't help Osweiler or Adam Weber in the least. There were at least five drops by my count.

1. What do the Broncos do with Knowshon Moreno?  Just when you put Lance Ball ahead of him, he lights a fire under his own ass and takes some aggression out to the field.  If you had to choose right now, do you keep him?

2. According to Jeff Legwold, the Broncos had intended to promote Osweiler to backup quarterback last week, but his performance against the Seahawks forced them to rethink that strategy.  After the way Hanie played today, I'd say there's no more thinking required.  The giant is number three on the depth chart, with Adam Weber clearing waivers and hitting the practice squad.

3. More from Leggy: the Broncos didn't bring Jim Leonhard to Denver just to rehab; they are keeping five safeties.

4. Legwold also says Keith Brooking was brought to Denver to play weakside linebacker on running downs during the suspension of D.J. Williams.  Can you make a decision on Brooking without seeing him play a down in the preseason?  Fox apparently told Legwold he could.  We shall see.

5. Randy Moss might have something left in the tank.  Unfortunately, that fuel's been diluted.

6. If you look up nepotism in the dictionary, Joe Buck's picture is right there.  Only Buck would bring up The Drive in the context of an Adam Weber possession to end a preseason game.  And that stubble you're sporting doesn't make you look any more manly, Joe.  It just makes you look like a guy who is trying to grow stubble because he's sitting in a booth with real NFL players.

7. John Elway's halftime interview with Terry Bradshaw was downright amusing, and not because Bradshaw asked him what he would think if the Broncos didn't win more game than they did last year.  I kept thinking that before the interview, Elway turned to Bradshaw and whispered: "if you ask me about Tim Tebow, I will bury you."

9. Orlando Franklin looks like he has improved his pass protection.  Is this because of Peyton Manning, or because he's really improved?

10. Eight penalties for 81 yards, Denver?   Normally, this would be a negative, but I'll get a better sense of this when Roger Goodell gets his head out of his ass and brings back Ed Hochuli and friends.

As always, feel free to let me know what I've missed.  Peyton Manning said he begins prepping for the Steelers tomorrow.  I just got an erection.