The smile on Champ Bailey’s face said it all. 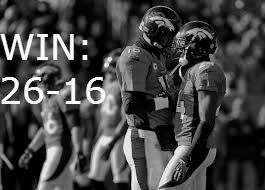 A grin as wide as his Hall of Fame career has been long.

And now, thanks to a little Peyton Manning pixie dust (via the legend John Elway), Bailey is going to play in his first Super Bowl and biggest game of his career.

Elway, for his part, did say he was going to restore greatness to the Broncos.

But did anyone really think it would take him so little time?

Even more, did anyone think he’d do it with the greatest offense in the history of the NFL?

Sure, there’s still two weeks and a game to go, but right now, the world seems as though it just woke up from a fifteen-year-long dream. And the Broncos are exactly where they ought to be.