Dan Fouts finally said something I agree with. 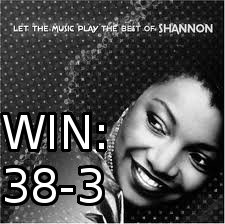 The Broncos' ass kicking has become a broken record to the AFC.

Let the music play--three more times.  Whoever comes to Denver won't be getting away.

Not this time; not with this defense;  not as the number-one seed.

Did we mention we've got Peyton Manning, too?

1. Congrats to both Eric Decker and Demaryius Thomas for becoming the first pair of Broncos receivers since Ashley Lelie and Rod Smith (in 2004) to go over 1,000 yards apiece.  The first drive of the game had me thinking they would hit 1,000 yards today alone, since the Chiefs defense sat back in a zone and rolled over like an old, blind dog.

2. Decker finished with 13 touchdowns on the year, but none was as amazing as his thirteenth.  He might as well have done it blindfolded using his Daredevil-like echolocation training.  Additionally, getting treated for ED now means that you play defensive back and need a day off after covering Decker.  Those four-hour erections, well, I guess you've been too excited watching Broncos football.

3. Joel Dreessen and Peyton Manning combined to stop Brandon Flowers from scoring on Ronnie Hillman's fumble.  There's nothing that forced them to hustle like that and save the Broncos what was effectively four points.  It won't get talked about much in the coming week, but it was as big a play as any in the first half.  Four points in the NFL is a big deal.

4. Rahim Moore's tackling this year is light years ahead of last year (if you'll recall, he was benched last year for missing multiple tackles).  He credits his MMA training in the offseason.  Box jumps, anyone?

5. As Doug pointed out to me during our in-game chat, Mike Adams's play has been a pleasant surprise.  Count it as another signing that has worked out well for the Broncos.

6. Wesley Woodyard gave extensive praise (without being asked specifically) to Derek Wolfe and Kevin Vickerson for their ability to eat up double teams while he's been feasting on ballcarriers all year.  Today provided ample evidence to back Woodyard up. Wolfe and Vickerson do the garbage work (holding the point of attack, slants, taking on double teams) so guys like Woodyard can apply their trade: pure speed.

7. Manny Ramirez, I'm putting you here.  You didn't dominate, but you did hold down the fort, boss.  And today, I think you had your best game as a Bronco (a close second being last week).

8.  You can't overstate the veteran leadership that Keith Brooking has brought to the Broncos defense.  There's a reason Peyton Manning told John Elway to consider bringing Keith to town.  Brooking doesn't go north-south as well as someone like Joe Mays did, but there's something to be said for reading your keys like a veteran and being around the ball.

9. D.J. Williams handled this season like a pro--not that he had much of a choice.  Still, we've got to praise his professionalism and his play when he's been out there as a situational player in nickel and dime packages.

10. Peyton Manning was Peyton Manning, which means, in a nutshell, he kicked ass, took names, broke records, and then proceeded to erase those names while he was breaking down tape for the bye week.   I'd be shocked if Manning isn't the MVP.  As a side note, it looks like he's also taken Brock Osweiler under his wing.

11. I guess I'm willing to accept that Von Miller may not win the Defensive Player of the Year award, despite his opponents needing a lunch.

Honorable Mention: (The entire Broncos organization.  You don't go 13-3 without everyone pulling their weight).

1. We love Elvis Dumervil as much as anyone, but we have to point out the obvious--Dumervil got handled on the edge on numerous occasions in the first quarter.  Dumervil adjusted by the second quarter, but if you're watching tape of this game and you're coming to Denver in two weeks, it's not just tape you've got, it's a game plan.

2. On the other side, Von Miller had similar troubles in the first half on three plays (and they say I only look on the bright side of Von).

3. It goes without saying that Ronnie Hillman needs to hold onto the ball, but since I've got ten bullet points to which I'm committed, I'm just sayin'.

4. Why did the Broncos get flagged for a false start to begin the second quarter?  You may have missed Zane Beadles getting really pissed off at Ed Hochuli, but it was for a good reason--the Chiefs defenders were falsely calling out the Broncos' counts.  That's not legal.  Uncle Ed should have caught it.  Beadles was simply letting him know.

5. Trindon Holliday didn't play today.  The reason that is a negative is that he will now go two weeks without a game in which to catch punts.  This may not sound like much, and certainly Holliday can catch dozens (if not hundreds) of punts each and every day in practice.  But it can't simulate a game.  Still, although it will be tempting to continue to allow Jim Leonhard to take punts during the playoffs (and it wouldn't necessarily be the wrong decision), I think you dance with the girl that brung you.  In this case, it's Holliday outside of the ten, and Leonhard inside the ten (although he did have one tough fair catch today).

6. Since I have to fill ten bullets, I'll just point out the Broncos could have used their timeouts more effectively (how great is it that I've been reduced to nitpicking timeouts?)

7. I'll admit when I saw big Orlando Franklin laying on the ground in the first half, I got pretty freaked out.  My guess is that it was a flesh wound and nothing more.

8. Oakland and San Diego squared off today and someone had to win.  The good news is that unlike last year, I don't care which team that was.

9. Wesley Woodyard compared Chris Harris to Champ Bailey before the game because, just like Champ, Harris averages about four interceptions per practice.  I'm disappointed in Harris.  Why can't he and Champ do that in games?

10. After today's game, it's a good bet both Demaryius Thomas and Eric Decker make the Pro Bowl sooner than later.  As John Fox cleverly pointed out: "it takes you a year to get in and a year to get out."  I think he just blew my mind.  I can't think of a better way to describe the Pro Bowl process.

1. Gary Kubiak, when you settle for threes, your playoff seed flees.   Although Doug Lee doesn't agree with me on this point, I think I'll throw it out there--if the Texans go one-and-done in the playoffs, I think Kubes is on the chopping block.  The Texans went from having a two-game lead for home-field advantage two weeks ago to now facing five days of rest before they host the Bengals next week.  If Texans fans were pissed before, imagine their fury were the Texans to lose next week.

2. There were mixed reports as to whether the Chiefs will let GM Scott Pioli go or keep him.  Our advice to Clark Hunt?  Keep Pioli.  The Broncos love his work thus far.  Of course, we'd say the same to Dean Spanos about A.J. "The Head" Smith.

3. Jeff Legwold said he's been hearing for over a month that Jon Gruden is coming out of the booth to take the San Diego job.  Bring it, Chucky.

4. Stop us if you've heard this before: Jay Cutler and Brandon Marshall did not make the playoffs.  The kid from Santa Claus, Indiana gets another year of coal in his stocking.  Additionally, Peyton Manning wiped Cutler's name off two more Broncos passing records (completions and yards in a single season).

5. Peyton Manning on Champ Bailey's 12 Pro Bowls: "That's a lot of Mai Tais that Champ and I have been drinking over there."

6. The Broncos were five for five in red zone opportunities.  That's pretty bitchin'.

7. Mark Sanchez's fortunes for the next decade?  Like all USC quarterbacks, he'll avoid injury and kick it with the ranks of the Jon Kitnas of the world, not that's there's anything wrong with it.

8. John Fox provided an example of a head coach's work schedule during the pregame, but after he got to what he does by Thursday, I must admit, I tuned out and thought, too hard, too long.

9. How many coaching jobs will be available next week?  I predict at least eight (San Diego, Kansas City, Philadelphia, Buffalo, Cleveland, Chicago, Jacksonville, and Carolina).

10. Who scares you in the NFC?  For my money, that team--The New York Giants--is sitting at home during the tournament.  Who will actually represent the NFC?  I'd say the Falcons for the pure reason that it's a real bitch to win in Atlanta.