The 2013 Denver Broncos will represent the AFC in Super Bowl 48 on February 2 in New Jersey, following their 26-16 (Gamebook) victory over the New England Patriots.

They will face the Seattle Seahawks, who defeated the San Francisco 49ers 23-17 in the NFC title game, and like Denver, were picked throughout the year to make it to the Meadowlands.

It's the Broncos' seventh conference championship, and their first in fifteen years.

For Peyton Manning, it will be his third trip to the Super Bowl, and he now has an opportunity to become the first quarterback to win championships with two different teams.

The win also levels his overall career playoff record at 11-11, and against the Patriots, Bill Belichick, and Tom Brady at 2-2.

Champ Bailey started outside in place of the injured Chris Harris and will finally play in his first Super Bowl after 15 seasons.

Denver forced New England into a pair of three-and-outs to open the game, but their own first drive stalled near midfield after a pair of first downs.

Their second possession covered 73 yards in 10 plays, but the Broncos settled for a 27-yard field goal from Matt Prater following a controversial non-call on a first-down throw to Julius Thomas, who was clearly interfered with by Devin McCourty. On third down, Peyton Manning was off the mark on a throw to an open Eric Decker in the end zone.

As the first quarter wound down, New England made it as far as the Denver 33, but an offensive PI call forced them back out of FG range, forcing them to punt.

Allen’s kick gave Denver the ball at their own seven, but the offense converted four third-down conversions on an epic seven-minute, one-second, 15-play, 93-yard drive punctuated by a one-yard throw from Manning to Jacob Tamme.

Adam Gase even threw a neat wrinkle in on the possession, with Virgil Green picking up six yards on his first NFL carry.

Midway through the second quarter, the Broncos had a 10-0 lead.

New England responded with a nine-play march of their own, but an 11-yard sack by Robert Ayers

forced the Pats to kick a 47-yarder to get onto the scoreboard at 10-3.

A holding penalty on Chris Clark pinned Denver all the way back at their own ten-yard line, but 26- and 27-yard completions to Demaryius Thomas brought them into field-goal range.

Strangely, Denver burned a timeout on fourth-and-one with 30 seconds left, only to kick the 35-yarder for a 13-3 advantage.

The Broncos opened the second half with another epic drive, this one a 13-play, 80-yarder that ate seven minutes and eight seconds of clock. Demaryius Thomas caught a three-yard pass from Manning to put Denver ahead by 20-3.

New England came back with a 13-play drive of their own, but it produced only 41 yards, including a ten-yard sack by Terrance Knighton on fourth-and-three.

From there, the Broncos overcame two long yardage situations, but not a third, and John Fox meekly chose to kick on fourth-and-goal from the one.

As with last week against San Diego (when Prater missed the kick), Fox eschewed putting the game away or pinning the Pats at the one, for expanding Denver’s lead from 17 to 20 (three scores either way).

The chip shot was good, expanding the Broncos’ lead to 23-3.

Given the gift from Fox, Brady threw his way down the field for a nine-play, 80-yard drive that required only 2:36 and drew the Pats to within 23-10.

A gorgeous 37-yard throw from Peyton to Julius Thomas put the Broncos back into FG range, and Matt Prater blasted his 54-yard attempt for a commanding 16-point edge.

Once again, Brady led the Patriots on another 80-yard march, but this one ate up nearly four minutes, and the two-point attempt failed after Brady had run it in from five yards out.

Denver had a 26-16 lead with 3:07 remaining, and Eric Decker recovered the onside kick from Stephen Gostkowski.

First downs by Jacob Tamme and Montee Ball sealed the deal, and Manning was able to kneel out the clock on New England's season, continuing Denver's march toward history. 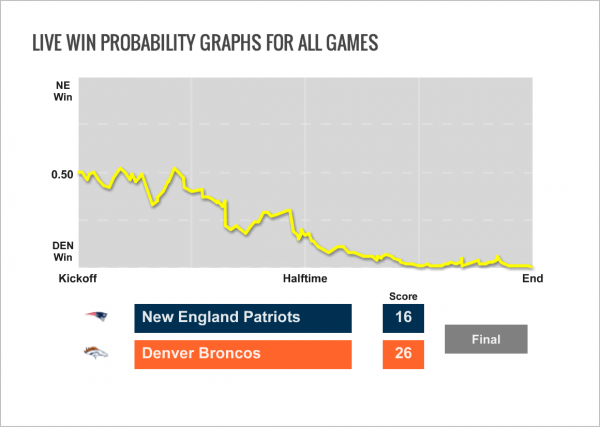