Fat Camp: Why Elvis Dumervil has simplified his pass-rush repertoire

Happy Friday, friends.  We got a question about the productivity of Elvis Dumervil from a reader the other day, and along with Doc, I am coming off the other edge to help answer it.  It’s hard to contain a rush that’s coming off of both sides.

Doc took the position that Elvis has fine numbers, and I agree with him completely.  I’m going to come from the schematic angle, and talk about how team strategy is directly feeding into his numbers, and the tactics he’s employing.

If I use the term Wide-9, what does that mean to you?  Over the last couple of years, NFL talking heads have decided that it was a scheme that was being employed in Philadelphia.  In the true sense of the term, Wide-9 simply means that a defensive player is aligned on the outside shoulder of a second TE, if there were one.  He’s very far outside the offensive tackle.

Philly did this on every snap with both DEs, since recently fired defensive line coach Jim Washburn favored it.  Due to the full-time nature of the tactic, the use of two Wide-9 ends effectively became a component of their defensive scheme.  It had implications to the overall defense, chiefly that the linebackers were highly stressed on the inside running game, and that the defensive line couldn’t do much more than speed rush from the outside.  You can’t really do an E-T stunt when the end is a 9-technique, and the DT is a 4-technique.

It’s no coincidence that the Eagles have been much better on defense since canning Washburn and junking the use of Wide-9 DEs as an every-down tactic.  I think we learned that asking both DEs to take sprinter stances and rush from wide angles on every snap is a loser as a strategy.  As a here-and-there tactic, it has some merit, though.

That brings me back to Dumervil, because the Broncos have been aligning him as a Wide-9 a great deal this year, and throughout the rest of his career, he’s played mostly as a 5-technique DE or a 7-technique standup OLB.  This is what the Broncos base defensive front looks like a lot of the time in 2012: 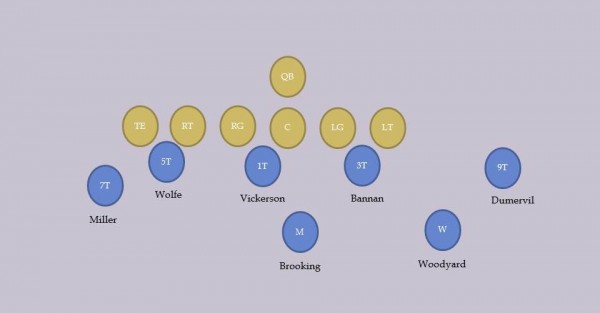 It varies some, but this is typical.  Offenses don’t know whether Von Miller is coming or not, but they do know that Dumervil is coming at an extreme angle off the open-side edge.  If they’re not extremely confident in their LT’s ability to get out to the speed rush, they’re left with two choices:

First, try to molly-block with the LG, and double Dumervil.  Molly-blocking is when a guard retreats at the snap, and ends up deep and outside of the LT, like so: 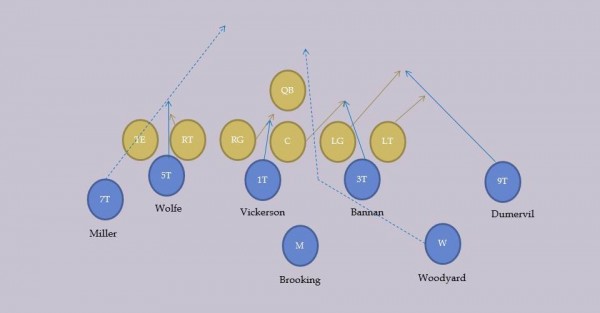 When there’s a 3-technique like Bannan, it’s asking a lot of the center to get over and pick him up, and there’s also the issue of the Will LB blitzing the A gap when the offense is contorting itself like this.  It also leaves Derek Wolfe and Von Miller alone with the RT and a TE.  Deciding to try to consistently molly-block a 9-technique probably doesn’t work.

The second choice is to slide the protection to the open side, and to try to fan the whole pocket wide.  That calls for what amounts to a zone protection scheme, where everybody on the offensive line is setting a little wider than normal, so that the whole pocket expands to help account for the extreme angle that the 9-technique is coming from.  The idea is that the protection is geared on helping to the outside, and a lot of the time, a RB will be asked to chip the outside rusher (the 9-technique, Dumervil, in this case).  This is what fan-protection looks like: 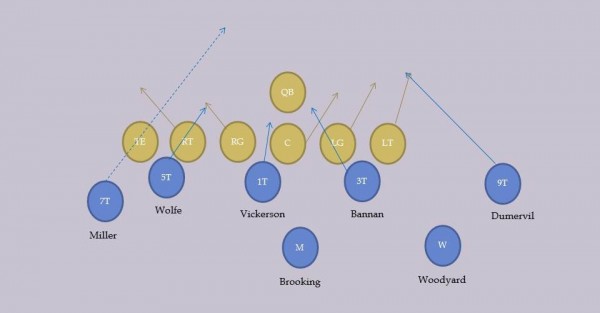 When the DTs read fan-protection, they will tend to rush to the inside, where the center is responsible for both A-gaps.  The closed-side DE (Wolfe) also will want to work inside, and try to get the RT and RG to double him, especially if Miller is coming.

Oh yeah, Miller.  Does anybody else see a problem with sliding the protection away from him?  The offense basically has to, though, if they think the LT can’t handle Dumervil from way outside.  Since they don’t know if Miller is coming, they can’t gear the protection to him as much as his ability would seem to dictate.

The third option is to max-protect, and keep two eligible receivers in to block, typically a TE and a RB.  Teams will do that when they’re pretty sure than Miller is coming as a fifth rusher, and really, it’s a way to deal with the occasional problems the Broncos have with covering TEs.  Refer back to the fan diagram, and add the TE with the widest fan responsibility on the right side, and you’ve got the picture.

All of those tactics present challenges to the offense, and that’s the main reason that Dumervil is playing wide so often.  It forces offenses to stretch their protections, and to keep receivers in.  Almost no team has good enough tackles to block both Miller and Dumervil one-on-one throughout a whole game, so offenses are forced to mix up their tactics, and try a bunch of different stuff.

The reason that Dumervil is almost exclusively speed rushing this year is that he’s coming from Wide-9 so often.  From that alignment, it takes too long to get into a bull-rush, so that’s out.  As mentioned before, you can’t really stunt.  You also can’t do much with counter-moves, because how are you supposed to get inside a tackle’s outside set, when you’re coming from far outside of him?

The scheme is limiting Dumervil’s ability to do some of the stuff that he’s best at, in other words.  That’s okay, though, because the defense as a whole is sacking the QB plenty.  The Broncos have 39 sacks in 13 games, which is tied for second just behind Cincinnati, which has 43 in 14 games.  (The Broncos and Rams trailed by one before last night’s game.)

I think that Dumervil and Wolfe are both sacrificing some personal productivity in the pass rush game in the service of carrying out their assignments within the larger scheme.

Of course, that’s all a vast oversimplification, and I think they’d admit that.  What they’re doing is better than what anybody else is doing, after all.  When I know that certain players are being asked to sacrifice to the larger good, though, that’s an adjustment factor that is present in my evaluations, and doesn’t seem to be in theirs.

What those two guys are doing is key to scheming up good mismatches for Miller, and each player does have plenty of opportunity to achieve his own statistical production, too.  That’s not what Jack Del Rio is going for, though.  He’s going for maximizing the effectiveness of the whole defense, and he’s accomplishing that.

PFF’s ratings for Dumervil and Wolfe would suggest that the Broncos should view them as below-average players, and should want to replace them both with better players.  That doesn’t reflect reality, though, because both guys are doing what is asked of them, very consistently, and over an unusually high number of snaps.