Depending on who you ask, there are 4-5 different “premium positions” in the NFL.  Everybody would agree that Quarterback is on the list, and most would say Left Tackle and Right-side Pass Rusher.  Many people say Cornerback, and I would say Run-Stuffing Defensive Tackle is premium as well.  What makes those premium positions, though?  Have you ever thought about that?

I would say that the primary reason those positions are held in such high regard is that the athletic skill sets which are required to be an elite player at them are difficult to find.  It’s a function of resource scarcity, and not necessarily of on-field importance, in other words.

If I want to run a Cover-2 scheme, I don’t need CBs with elite man-to-man coverage ability, so I wouldn’t place a premium on those skills.  If I always have the lead in games, maybe I care a bit less about stopping the run.  The last six Super Bowls have been won by teams with below-average LTs (Marvel Smith, Tarik Glenn, David Diehl, Max Starks, Jermon Bushrod, Chad Clifton, and Diehl again).  The evidence would indicate that you don’t necessarily need a great player at that position.

I’ve decided to write a few articles about non-premium positions, or more accurately - roles on a football team - where significant competitive advantage can be generated by the acquisition and development of quality players.  What I mean in distinguishing “role” from “position” is that with the schematic variation across the NFL, the concept of position is getting to be kind of outdated and misleading.  For example, an even-front OLB is much, much different from an odd-front OLB.  Calling them both OLBs does neither justice, because we're talking about apples and oranges.

Today, we’re going to start by looking at Move Tight Ends.  Sometimes, these players are called H-Backs, but I don’t really like that term.  I had occasion to listen to Joe Gibbs a couple mornings ago on the Opening Drive on Sirius XM Radio, and he talked about how he came to love multiple TEs, and that Kellen Winslow was really the first Move TE, when Gibbs was the Offensive Coordinator of the Chargers in 1979 and 1980.

When Gibbs went to the Redskins, he used a Move TE there too, but more as a blocker.  The term H-back actually came from the idea that he wanted to move a TE into position to help block Lawrence Taylor wherever he was in the defensive alignment.  The classic Redskins H-Back was Clint Didier, who was 6-5, 240 pounds (big for a TE then), and who only caught 141 passes in 105 career games.  He went on to run for US Senate in Washington in 2010, as a radical Tea Party type, and he got 13% of the vote in the blanket primary, finishing a distant third.

Didier was a blocker, as were other Redskins H-backs, and today, you always hear the big WR type called an H-Back, and I just find it to be historically inaccurate.  Thus, I use the term Move TE, which I distinguish from an Inline TE.  The Inline TE tends to line up on the line of scrimmage with his hand on the ground, next to an Offensive Tackle.  The Move TE is usually in the backfield, and can stand up, put his hand on the ground, or go in motion.  He can be deployed wide, tight, in the slot, or as a FB.  In short, he gives you a lot of flexibility.

Have you ever heard the term “Pro-Style Offense”?  I think it’s kind of a stupid term that doesn’t mean anything real.  It historically means that the primary personnel grouping consists of 2 RB, 2 WR, and 1 TE, what we call 21 personnel.  That was distinguished from a lot of college programs that were still using the Wishbone and other three-back schemes.  Now, it seems to mean “not a variation of a spread offense.”  Even that’s getting inaccurate in the NFL, though, as teams smartly incorporate aspects of college spread schemes.

In the course of doing my Digesting series last fall, it became clear that a lot of teams tend to always use 1 RB, 1 TE, and 2 WR, with the fifth eligible player sometimes being a TE, RB, or WR, depending on the situation.  I’m a big believer in doing away with the traditional FB and heavily incorporating the second TE.

The best thing about using two-TE personnel is that it forces a defense to decide if they want to try to defend you with their Base defense (four DBs), or a Nickel defense (five DBs).  If it’s Base, the offense should have an advantage in throwing the ball, because that Move TE is usually going to be able to beat a LB trying to cover him.  If it’s Nickel (Big or Small), the offense should be able to run the ball well, because that Move TE should be able to block the extra DB on the field.

The value of Tight Ends is that they’re useful players in both the passing and running games.  Very few are great blockers, and it’s actually a lot harder to find a skilled blocker than a skilled receiver at the position.  Most are passable blockers, though, and in a well-conceived running scheme, you can get the lesser blockers onto the specific defenders who they’re most able to handle.

The Patriots have both the best Inline TE (Rob Gronkowski) and the best Move TE (Aaron Hernandez) in the NFL, and they stole both players in the 2010 Draft.  Gronkowski was a second-rounder because he missed his last year at Arizona with a back injury.  Hernandez was a fourth-rounder because he failed a couple of tests for marijuana.  On film, both were mid-first-rounders that year, so nobody should have been surprised at their success.

When the Patriots use 12 personnel, with, say, Danny Woodhead, Gronkowski, Hernandez, Wes Welker, and Brandon Lloyd on the field, that’s going to be a complete nightmare for defenses.  The addition of Lloyd, to keep the CB on his side honest, makes me wonder if this grouping can even be contained.  Teams should be seeing the stress that a group like that places on defenses, and trying to emulate it.

Other good Move TEs in the NFL are Fred Davis, Dustin Keller, and the Broncos’ Jacob Tamme.  I think the Seahawks stole Kellen Winslow II from the Bucs for next to nothing, and that he’ll pair very nicely with Zach Miller.  (I’ve really liked Seattle’s offseason, while most football talkers have questioned it.)

To give you an idea of what a good Move TE can do for a team schematically, I’ve created a few diagrams.  First, here’s a look at the most basic 12 personnel formation.  (In these diagrams, the Inline TE will be “Y”, and the Move TE will be “TE.”) 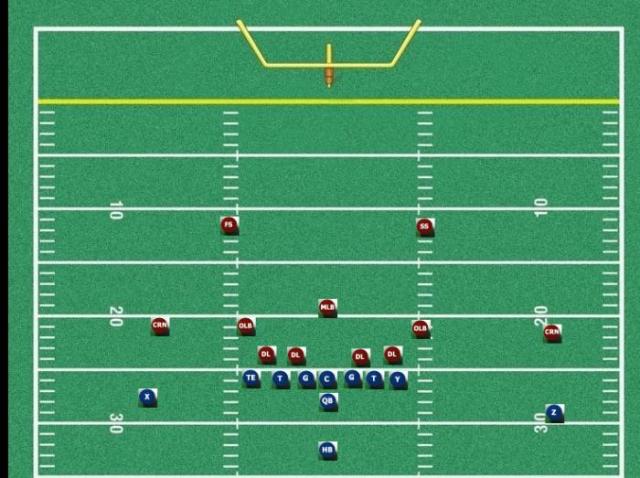 The formation has no strength, and the defense has to play straight up.  Since we’re seeing Base defense here (four DL, three LB), we know we have a great look in the passing game, but we can also run a stretch-boot play either direction, and get seven blockers on six defenders, with the backside edge guy having to stay home on the bootleg. 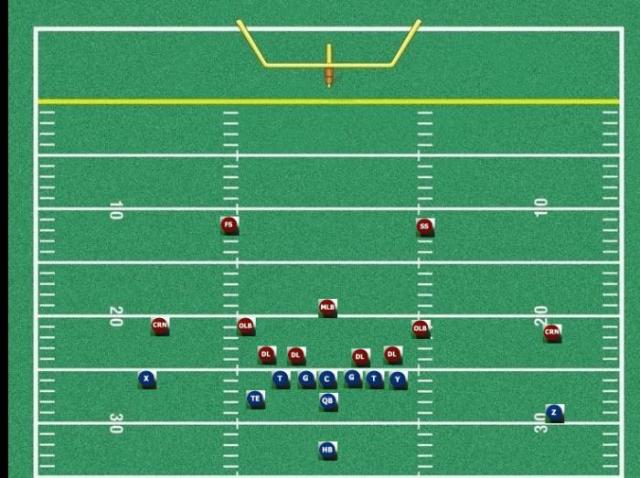 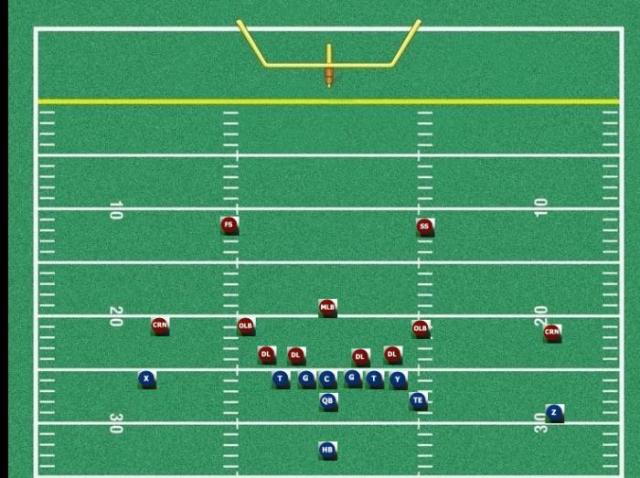 Does the defense shift to match the newly created strength, or not?  The answer to that question can lead to the selection of the ultimate play, if the offense is in something packaged.  (By that, I mean there’s a run play, a pass play, and a bubble screen all built in, depending on what the defense calls.) 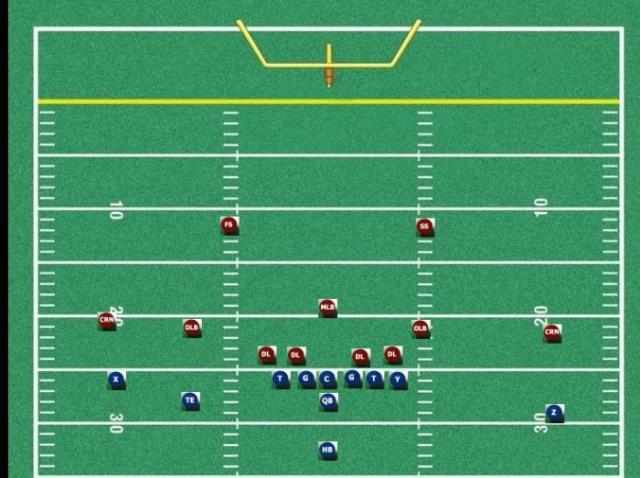 Finally, with the Move TE in the slot, the defense faces a problem.  Does the WLB move out into space to cover him?  That leaves a six-man box to run against, and a coverage player who probably isn’t the greatest in space.  Does the FS drop down into the slot to take him, and leave the SS as a single-high Safety?  Does the defense keep their Cover-2 shell alignment, thereby signaling that they’re playing a zone?

A good Move TE can add a lot of versatility to an offense and put a lot of stress on a defense.  If I were an NFL Offensive Coordinator, the first thing I’d do is ask the GM to get rid of anybody who resembles a FB and to go find me somebody who can play the Move TE role in my offense.  Out with the limited-use parts, and in with those which are very useful.

Side Note - As for the acquisition of Chris Gronkowksi, I expect it to have somewhere between little and no impact on the 2012 Broncos.  The offense I think they'll use never employs a FB, and unless middle Gronk is a hell of  a special teams contributor, I'd be surprised if he makes the team.