Happy Wednesday, friends.  There’s some big news in Tedistan, but I’m not able to announce it publicly just yet, so we’re going to return to Undervalued Positions.  Today, we will look at the Matchup Safety, which I think will go nicely against our last edition of this miniseries, where we looked at the Move TE.

It gets especially interesting, offensively speaking, when one of the TEs has WR traits, and can be flexed out in a slot or flanked alignment.  We’re talking about players like Aaron Hernandez, Jimmy Graham, and Jermichael Finley, who have the ability to release efficiently with a two-way go, and then separate in space (meaning outside the interior traffic that often helps TEs get open).

What’s a defense to do when that TE effectively becomes a WR?  One answer is just to play zone, but there’s some danger to that being the default answer.  If an offense knows your Base group is going to zone a three-wide look, then they’ll just know to run zone-beating concepts when they deploy that look.  In reality, an effective defense has to be able to play some man coverage against that flexed TE, so that the offense isn’t sure how they’ll react.

The best answer in man coverage against the flexed TE is to have a Safety drop down and be both an eighth man in the box for run support, as well as taking the coverage responsibility for the flexed player.  That will leave the other Safety single-high, and you’ll have a basic Cover-1 (Man Free) look, like this: 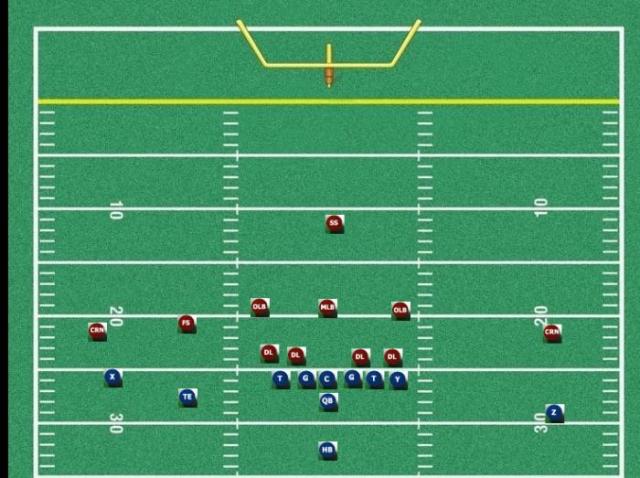 A smart offense wants to attack Cover-1 deep, because the single-high safety is going to have to get all the way from the middle of the field to the sideline to defend a 9 route.  If the QB can stare down that Safety in the middle of the field, and not tip which way the throw is going, the dude has no chance to help the CB in single coverage.

That’s the Matchup Safety I’m talking about.  The best example of this player is Antrel Rolle, who was a highly drafted CB, but didn’t run quite well enough to play the fastest WRs outside, and thus became a Safety.  Malcolm Jenkins and Michael Huff are two others of the same type.  In the 2012 Draft, I really liked George Iloka of Boise State as a Matchup Safety, as did Doc.  I said a bunch of times I didn’t care if he ever started as a traditional FS; all that mattered to me was that he had the size and length to deal with TEs, and good man coverage skills.  (The Bengals stole Iloka in the sixth round, much to our collective irritation.)

The Matchup Safety has to be able to play a deep half in Cover-2 when the situation calls for that, and then drop down and play man (and have gap responsibilities in the box) when the situation calls for that.  This is not a real easy skill set to find.  It’s easier to find what I’d call a Range Safety, who will almost always play the deep middle, or a half or third.  Rahim Moore is a Range Safety type; so are Ryan Clark for the Steelers, Eric Berry for the Chiefs, Thomas DeCoud for the Falcons, and Eric Weddle for the Chargers.

NFL defenses are going to start getting smaller, with big CBs becoming Safeties, and big Safeties becoming LBs.  This started to happen in the 1990s, when Jimmy Johnson brought his speed-requiring 4-3 scheme with him to Dallas from the University of Miami.  It didn’t catch on as widely as it’s about to, though.

As more and more offenses use extra TEs and WRs, and quit wasting a body by playing a FB, defenses will have to continue to adapt.  I think we’re going to see some teams (who have the CBs) start playing Nickel with one safety and four CBs against certain spread-out offenses.  The Broncos and Cowboys are two teams who could give that a real serious try.

Of course, the natural correction will be for offenses to get real serious about running the ball with power from spread looks, using concepts that were popularized by Rich Rodriguez and Urban Meyer.  That’s what college teams did in the early 2000s, to combat the small, fast defenses that the success of Johnson’s Hurricanes spawned.  That’s why you’d rather have a bigger guy than a CB, who still has the man coverage skills that the defense needs.  That’s why you want a real Matchup Safety, because you’re already ahead of the countermove when you have one.

Smart defenses are going to build toward having a Range Safety and a Matchup Safety, and they’ll be the ones who are best able to deal with the multiple looks that offenses are showing.  It will be interesting to see how the Broncos deploy their group of DBs in the fall, and also to see how much Rahim Moore and Quinton Carter have improved.