While going through some of last year’s film, I found a play that demonstrates so precisely how to stop the run, that I wanted to share it with you.

It’s from the first quarter of the Broncos' 30-23 victory over San Diego in Week 11 - the first play of the first possession. It exhibits two versions of classic shed techniques, and in doing so, the Broncos turn a potentially good gain by San Diego into a one-yard play.

In the first shot, fullback Le’Ron McClain (33) is split out to the side and pretends to go in motion, then settles back into the wing slot. Jackie Battle (44) is the ballcarrier. They’re in a two-tight end package, sometimes called a max, max-protect or, depending on personnel, jumbo package.

San Diego ran it a lot due to their odious offensive line - it gave Philip Rivers some degree of cover. Denver lines up with their defensive ends flipped - Elvis Dumervil (92) is on the defensive left, across from the outside shoulder of tight end Randy McMichael (81). 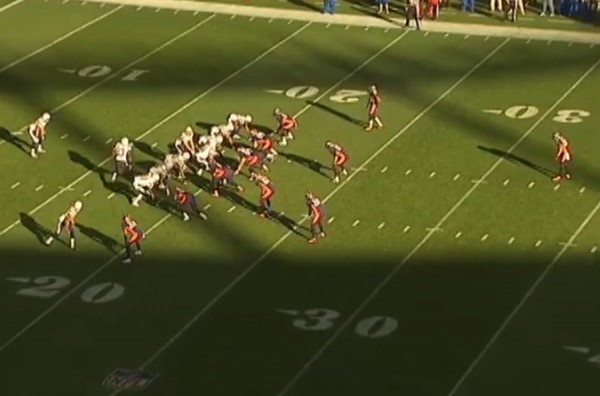 The Broncos have five men on the line to counter - their usual LDE, RDE, DT, and NT package, plus Von Miller (58) at the line and playing over the tight end on the defensive right, plus two linebackers behind the LOS.

Wesley Woodyard (52), the Will LB, has also flipped. He is playing behind and inside of Doom, directly over the tackle, with MLB Keith Brooking (57) to Woodyard’s right.

At the snap, safety Mike Adams (20) drops back in case it’s a pass, but he recovers quickly enough to get in on the tackle. 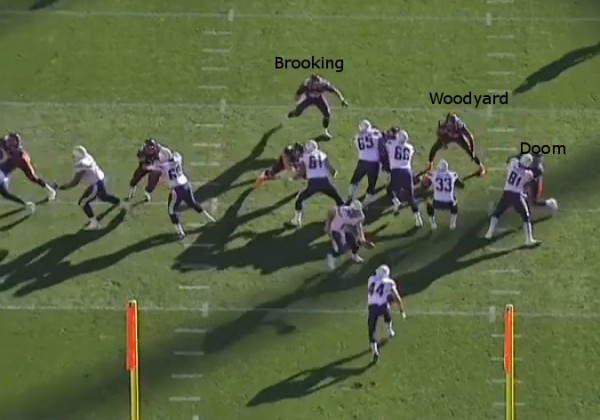 The run goes right at Doom and will swing either inside or outside, depending on what the blocking gives the RB. Doom is hand-fighting with McMichael and trying to hold his position, while you can see above that McMichael is trying to turn Dumervil to the outside. It’s McMichael’s job to get and keep his helmet between Doom and the play.

McClain is coming through the C gap, isolated right on Woodyard. The right guard (new Bronco Louis Vasquez, #65) and tackle (Jeromey Clary, #66) have double-teamed DT Kevin Vickerson (99) out of the play. At this point, everyone’s covered and you’d expect a decent gain on the play.

But here’s where it all goes wrong. The fullback McClain goes directly at Woodyard, but shaded to the inside (to Woodyard’s right). Wesley uses a basic shed technique - he lets McClain get into his body, then sheds him by extending his arms, not unlike a standing version of the bench press. Brooking’s experience has him moving smoothly behind the LOS, out of the ‘trash’, and towards the ballcarrier, while Woodyard’s technique against McClain will clog the C gap and force Battle to move outside Doom to get any yardage. 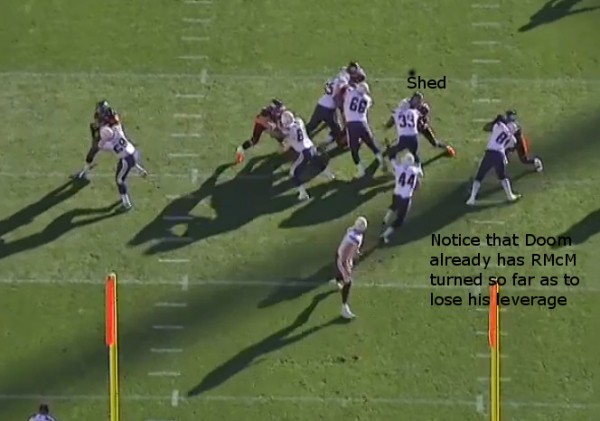 Above, Woodyard absorbs the impact of McClain’s attempted block with the right side of his body and will push off of him with his right arm, jumping into the C gap. A linebacker always tries to keep his outer arm free, so this is excellent technique by Woodyard. His leg is already partially blocking the gap, and the runner sees that happening.

Doom himself has used the force meant to turn him away from the RB and has turned McMichael like a steering wheel, forcing him to stand flat-footed and bent over to the right. McMichael has zero functional strength in that posture. Dumervil’s is shedding the TE by forcing him back onto the soles of his feet and bending him to the right - right out of the play. 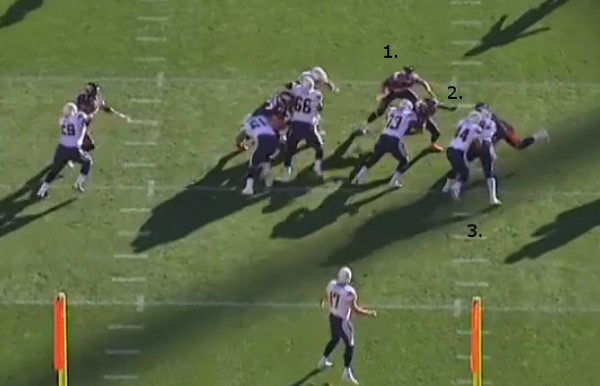 Three important things are happening in the above shot:

You can see that the TE still has one foot back (and in his runner’s way) and he’s stepping forward with the other. The best outcome now, from San Diego's perspective, would be for McClain to hang onto some part of Woodyard, for Doom to be controlled by McMichaels, and for Brooking to make the tackle after about a five-yard gain - anything four yards or more is considered a good first-down play.

It doesn’t happen that way, though. 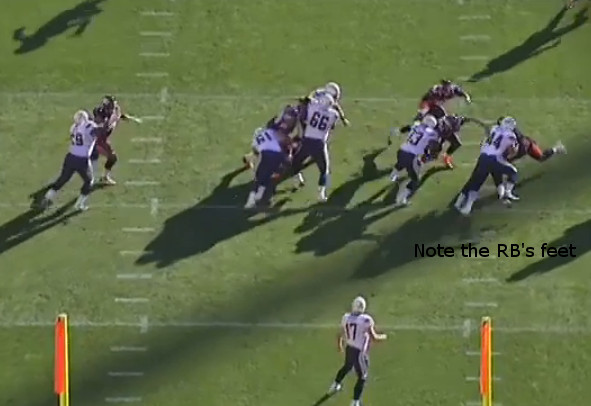 Look at the running back’s feet above. He’s got to get around the right edge and in theory, being right on his blocker’s hip is exactly where he wants to be. That’s the problem with theory, though - it doesn’t always account for what really happens. In this case, Dumervil slides off of the TE’s block to the outside, Woodyard sheds McClain almost effortlessly, and Brooking crashes downhill to get in on the tackle. 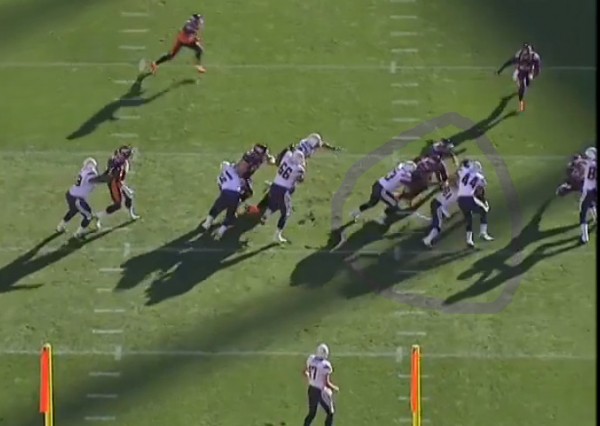 I added the above screengrab because this is a small point, but it makes a big difference. Battle has to choose his lane, but is forced outside when McMichael can’t get his helmet between the RB and Elvis. That means that the potential yardage from the play has just disappeared. Although the TE is still in contact with him, Doom’s left hand is already grasping at Battle’s right knee, and he’s moving in.

Brooking never has a blocker - and his run/pass recognition is perfect. Those three Broncos converge on Battle and are quickly joined by safety Mike Adams, who has opened his hips and run backwards to cover in case of play-action. It’s no fun for Battle, as he is swarmed under with only a one-yard gain. 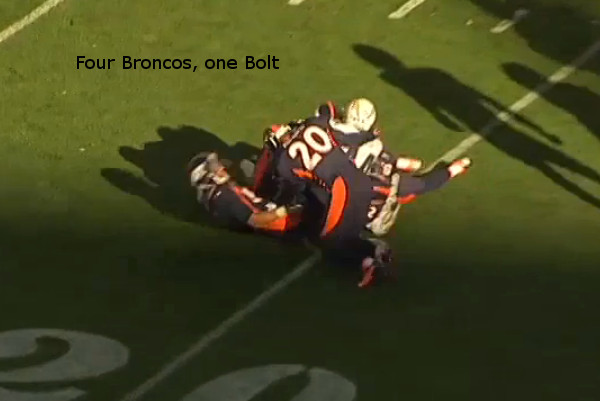 What drew me to this single play is that four major principles are demonstrated within it:

Keeping the outer arm free, using your shuffle to key in on the ballcarrier, knowing how to keep your helmet between the defender and ballcarrier, and knowing and applying leverage are the keys to this play.

I hope that you get something out of it.