Happy Friday, friends.  We've been telling you for a while how awesome access to all-22 coaches film would be, and I can now confirm, it's pretty awesome.

For those who aren't subscribers, allow me to briefly explain how it works.  There's no sound, and for each play, you get a high sideline view that includes all 22 players.  Following that, you get a tight view from behind the QB.

In the Steelers game, I was impressed with how well the Broncos protected Peyton Manning, and I was interested to see the difference in methodology from last season.  With Kyle Orton and Tim Tebow (a slow mover and a slow thinker), the Broncos almost always used at least six men in protection, and often, it was seven.  With Manning, the Broncos mostly kept five men in, and sent five men out into the pattern.  The use of extra blockers was quite limited, actually, and it speaks to their confidence in Manning recognizing the rush scheme, and getting the ball out quickly to the open player.

First, I'd like to give props to the Broncos offensive line, who did an excellent job throughout the game, against the most complicated rush scheme they'll see all year.  With very few exceptions, LT Ryan Clady, LG Zane Beadles, C J.D. Walton, RG Manny Ramirez, and RT Orlando Franklin won their matchups throughout the day.  They're not as bad as Orton and Tebow sometimes made them look, and they're probably not as good as Manning will make them look, but they did have a very encouraging start.

The Broncos did allow two sacks, and neither could be blamed on the five linemen.  Today, using the coaches film (mostly the tight backfield view), we're going to explore those two plays in detail, covering what went wrong, and what the fixes are.

Here's the pre-snap view, and with the telestrator feature on the iPad app, I drew some red arrows to show that both linebackers on the defense's right side are showing blitz, and that they will, in fact, be coming.  Note also that DE Brett Keisel (99) is standing up in a 2-technique on LG Zane Beadles.  This looks like a six-man rush, and the Broncos are set up to max-protect it with seven blockers. 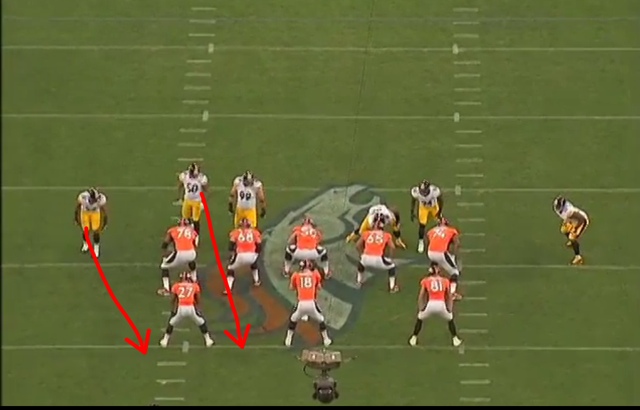 Now, if you think both the LBs are coming off the open side of the offense, and you have a LT and a RB to handle them, different teams react to that differently.  I prefer how the Broncos approach it, by having LT Ryan Clady handle the outside guy, and the RB (Knowshon Moreno in this case) handle the inside guy.  Clady should be able to push an outside rusher deeper into the backfield than the QB's launch point.  I just like the angle the best doing it that way.

As you see at the snap, everything looks pretty good at first.  Clady has his set, and Moreno is in good position too.  On the right side, the Broncos also look pretty good.  My only concern is that Moreno's technique isn't very good, because his feet are too wide.  That gives him a base to anchor, but it limits his ability to slide laterally.  Really, it's assuming that the blitzer is going to be lazy and try to play through him, and it's cheating to negate the guy's power advantage. 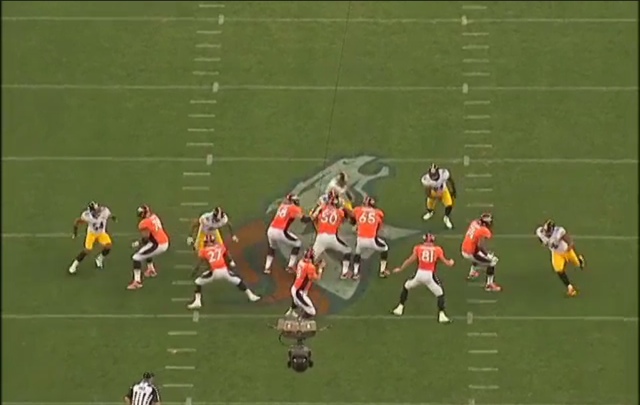 As you see here, the ILB Larry Foote (50) dodges Moreno's flat-footed block, and goes around him to the outside.  Knowshon reaches for him, but misses, and ends up having to hold himself up by putting his hands on the ground. 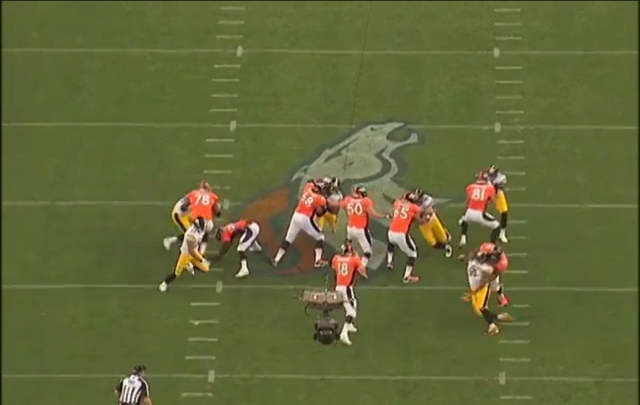 Note that RT Orlando Franklin also got beat by LaMarr Woodley (the only time I saw it happen), and that if Foote hadn't gotten Manning, Woodley would have.  On this play, the protection call was right, but the technique and execution broke down.  That happens, and sometimes, the defensive guys win; I'm sure the Broncos will continue to coach up Moreno and Franklin to get their technique better.

Here's a pre-snap view of the second play.  We see three down linemen, aligned as 3T, 1T, and 2T from the offense's left to right.  The Broncos are in 11 personnel, with Jacob Tamme (84) as the single TE on the right, tight to the line, and Brandon Stokley (14) in a slot to the left.  The Steelers are in base defense - in the picture here, you can see Lawrence Timmons (94), Foote (50), and Woodley (56), from the offense's left to right, and OLB Jason Worilds (93) is out of the picture across from Stokley in the slot. 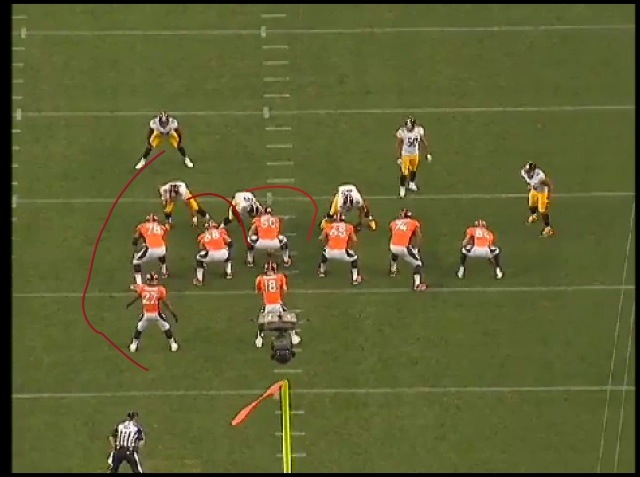 Just before the snap, Keisel shifts from 3T to 4T, head up on Clady.  At the snap, he goes hard across Clady's face, and attacks the A gap.  Manning has miked Larry Foote (50), the ILB to the right side of the offense.  For those who don't know, miking simply means that the QB makes a guess who the fifth rusher is, if anybody.  He'll holler out "50 is the Mike," and that tells the whole protection group who to block, based on rules set forth in the basic protection scheme called.  Here, the implication of miking Foote is that the protection slides to the right, and that Moreno is responsible for the inside-most free runner to the offense's left. 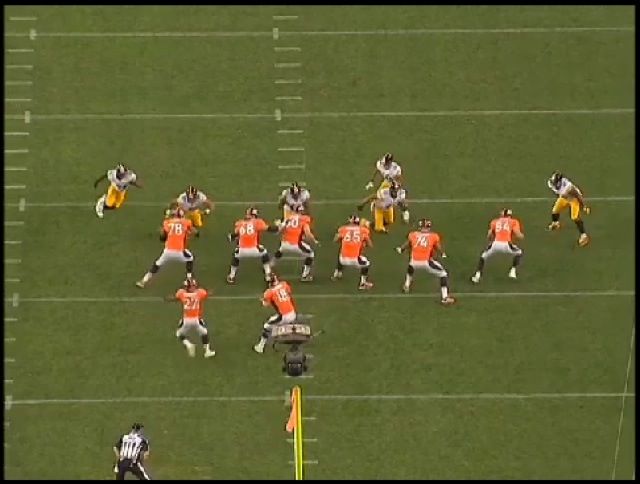 Here, you can see Clady, Beadles, and Walton sliding right, and the three defensive linemen rushing right along with them.  Foote, however, isn't coming.  He's dropping into protection.  Lawrence Timmons (94) is coming, and so is OLB Jason Worilds, off the slot.  Clady is out of position to block anybody, because is sliding right, and Moreno can only pick up Timmons.  His stance is better this time, as you see. 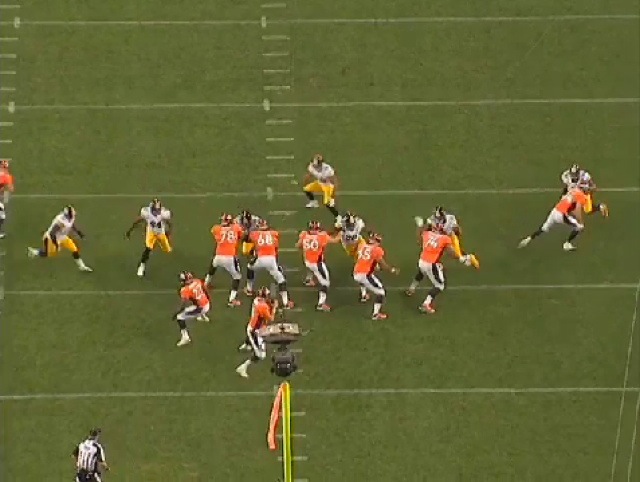 Moreno goes low on Timmons with a good base, and blocks him effectively.  Clady is blocking air, which is a scheme victory, in and of itself.  When a DC can scheme it up so that the offense’s best pass protector has nobody to block, that’s good work.  Worilds is a free runner from the outside.  Notice on the left side of the picture that nobody is very close to Stokley. 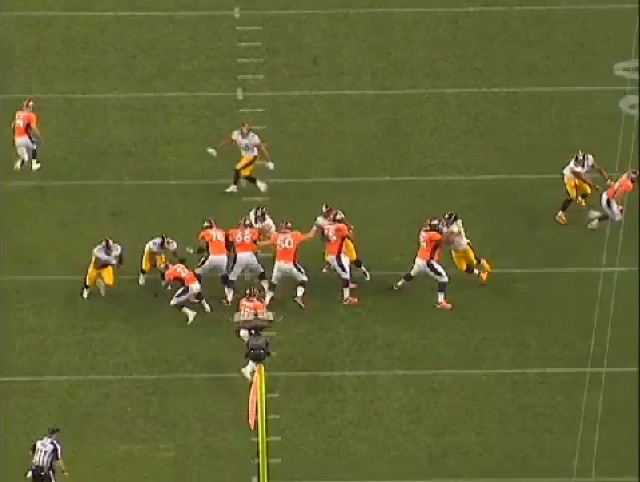 Manning gets sacked, and it’s his own fault.  The offense is counting on him to correctly identify the rush scheme, but he doesn’t.  That speaks to how well the Steelers disguise it, but we have high expectations for Manning, as he does for himself.  Even after miking the wrong guy, and sending the protection the wrong way, Manning still should see the blitz coming off the slot, and deal with the free runner by throwing hot. 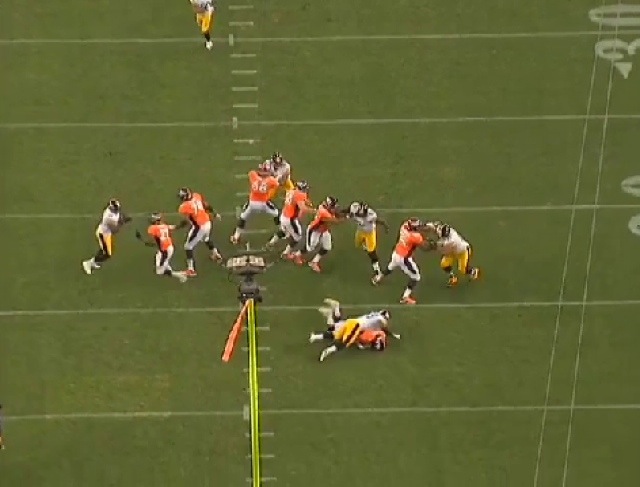 I also blame Brandon Stokley here.  He’s a gritty, wily, heady veteran, and you can throw some more white-boy-praising adjectives in there too.  He’s all that and a pair of Ray-Bans along with an ironic tattoo.  Here, he needed to see that Worilds was coming off the slot, know that the protection scheme couldn’t pick him up, and break off his route hot to the outside.  Instead, he ran downfield into the safety’s coverage, and Foote eventually trailed him underneath. 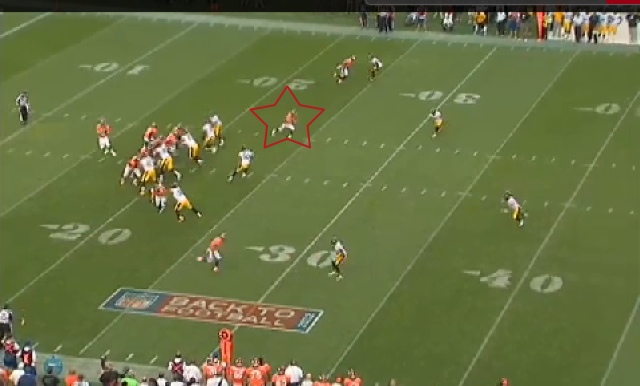 Here at IAOFM, through the wonder of coaches’ film, we’ve seen two plays where the defense won.  On the first, defensive players beat offensive players.  On the second, the defensive coordinator beat Peyton Manning.  There are still some kinks to work out in protection, but the Broncos did a very good job overall against a talented and well-coordinated defense, and that should be encouraging to Broncos fans.