When Tom Adams was the defensive line coach for the University of Kentucky back in 2000 (he would later move to Baylor and coach the defensive line from 2002-2004), he developed a modern technique based on a very ancient piece of training equipment. One of the presenters at a seminar Adams had attended said he was having his defensive linemen practice their forearm shivers against a wall. Tom took something home from every seminar he went to, and here was the lesson from this one.

Adams’s facility didn’t offer a handy wall near the practice field, so he took eight-foot-by-eight-inch posts and sank them into the ground, leaving about five feet exposed above the turf. He wound each with rope, creating a nine-inch striking surface. His linemen would train with them by using them for forearm shivers and palm strikes. For an offensive or defensive lineman, getting a solid punch, forearm shiver, and slap are standard to the positions.

Go back a thousand years, and you would see people in oriental training clothes, hammering their hands, feet, elbows (and sometimes heads) into essentially the same device. If the rope is too hard for you, you can add straw to pad it. Eventually, the skin toughens. 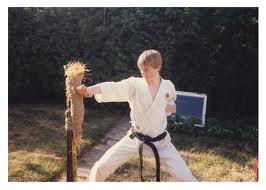 They make them portable now, but it’s pretty much the same unit as it was when the head of the Minamoto clan (Minamoto Yoritomo) became the first Shogunate of Japan in 1199 CE. I was adopted into a branch of the Minamoto when I made Menyo-Shihan, which is translated as Licensed Master Instructor, or simply Professor, and that was quite an honor. Since I could trace the lineage of my teachers one by one back to Minamoto Yoritomo, Adams's application caught my eye.

The makiwara are generally made of wood, and usually bound with rope (for those of us who don’t want our hands too calloused, one can use a foam pad), and made for repeated striking. Modern versions are also available, with springs and stands built in. They toughen the skin if struck with the bare hands, knees, elbows, feet or (rarely, these days) the forehead.

I fought some guys with thick calluses on their foreheads in various schools around the Midwest. They got them from breaking wood or cinder blocks - usually stacks that were 1-5 blocks high - with their foreheads. Some people would concede the match rather than go up against them. They were, to use a version of the modern vernacular, simply bat-dung crazy. By now, a lot of them don’t know their own names, but as fighters, they were tougher than hell back then.

Adams had a nice technique for teaching his charges how to use his version of the makiwara. He’d start with them down on their knees, with the toes curled back and the heels up - that eliminated any issues with incorporating the stance. They started with their elbows in tight and delivered six palm blows with each hand before practice. If your elbows aren’t tight, your opponent can easily get inside your hands. If he does - you’ll lose that encounter.

Over time, Adams had them come to their feet, and a whole new set of problems was shown to them and dealt with. In order for the punch to be strong enough, it has to be delivered with the wrist straight, the palm out, and the thumb - which starts in the up position - turns 90 degrees as the blow is delivered. We used to use a 180-degree turn, but you can generate a lot of force with just 90 degrees of circular movement. By not cocking the hand farther and leaving it angled with the thumb up, you can also use it to grab or ward off your opponent’s grasp. You also want to stay relaxed until the moment of impact, at which time all the muscles in the body come and drive into the blow. It works as well as it did back in the time of the first Shogunate.

When you add the stance to the technique, you have to work with the right and left feet staggered slightly forward, first one, then the other, next with the feet about equal and either under the shoulders or just outside of them. Defensive tackles will narrow their stances when they pass rush and widen them somewhat when they are expecting a run - it’s a dead tipoff for the OL. They have to practice the punch on both sides in pass rush and run support stances. The players are trained in punching equally well with either hand, regardless of which side of the line they play on.

No matter what else you do, the punch will have little effect unless you get your hip into it. Boxing, football, martial arts - all of them deliver their power blows by getting the hip snapped forward and into the blow. You’ll often hear coaches use the term ‘rolling the hips”, which might give the wrong picture. The idea is to bring them forward sharply (if punching, you snap only the hip forward on the side you’re punching with; if pass blocking or tackling, you snap both forward), whatever term may be used.

The difference is clearly visible - you always know when someone isn’t getting their hips into the technique by the results. The players had to throw their hips into a right punch, then a left punch, right and left slap, right and left forearm shiver. It takes a powerful core musculature to maintain your power over multiple repetitions, but it helps prepare the linemen for a game situation. This is something that you could easily pick up on when watching some of the drills at the combine.

The core muscles are what permit you to bring the body’s weight into the technique. It works about as well for linemen as for boxers or judoka. This is another reason why core muscle development is so essential for the NFL professional - if you’re not using your hips in your punch, you’re not getting the full result.

The specific strike being practiced is the shotei uchi, or ‘palm heel strike’. It’s been used since prehistory. There’s a nice video piece on it here. The founder of this system of Karate was named Mas Oyama, a Korean who became a Japanese icon. He actually fought bulls barehanded and would break off their horns with his strikes before killing the animal with his kicks and punches - usually to their heads. From a modern perspective, he was probably as crazy as a loon, but he was also an incredible practitioner and teacher. I did study that style briefly, and I was very impressed with the power of their techniques.

We’ll get deeper into football technique and applications over time, but learning the basics (such as the punch and the power in the hip snap) and practicing fundamentals is something that has to be continued throughout the players’ careers. It’s hard to go further back in the basics than 1,000 years. Adams somehow managed to bring back the past, and to use it to move into the future. More power to him - and to his players.

Adams himself died at the young age of 48, felled by cancer. His funeral was August 5, 2006. He is, and will be, greatly missed.