I’ve emphasized the importance of leverage in a variety of situations, mostly in terms of blocking or pass rushing.  No matter the position you’re playing, leverage has a major role in how much success you’ll achieve. Sometimes it’s getting your hands on the ballcarrier - good tackling form requires good use of leverage. Linebackers use it to keep their legs clear of clutter during a play. Wide receivers and cornerbacks talk about leveraging - bring force to bear - on a specific route. When you have a cornerback covering you tightly and you fake a cut into his body but plant and cut away sharply, he’s lost the leverage on that route.

It works the other way - you’ll see Champ Bailey taking away the leverage from a receiver by legally interfering with where the receiver wants to go. A top quarterback can do the same thing with just his eyes, forcing a safety to break on one route in order to set up another receiver to be open. Leverage can be physical, as it is in pass rushing and in blocking. It can be the intangible key to a successful negotiation or a defended or completed pass. It’s one of the keys to football on a number of levels.

I talk about leverage a lot because it’s equally important for the defenders and for the offensive linemen or whoever - a tight end, wide receiver or running back - who has to take on a defender and turn them away. The guy who achieves leverage first will win the battle. As I mentioned when talking about drive blocking - moving your opponent three vertical inches will win the encounter. That works for defenders who are working a bull rush, too - if you can get the blocker either off-balance or moving backward three inches (both are preferable), they’re at your convenience.

On the other side of the ball, you know that leverage is essential for the players who are tasked with rushing the quarterback. Von Miller’s innate grasp on the principles of leverage and his ability to bring them to the on-field battles is remarkable for a player of his age - it’s one of the many factors that sets him apart from the rest of the players who came into the league last year. Elvis Dumervil is justifiably famous for his bull-rushing technique, since he’s shorter than most defensive ends but has amazing strength in his arms, shoulders and chest. He also has a natural sense of balance and leverage, and it comes out in multiple ways as he racks up his sack totals each year. Doom has the power to essentially provide a forklift maneuver, ala former Bronco Jumpy Geathers. He’s not the only Bronco who has a bull rush, though.

In the second quarter of last season's Wild Card victory over the Steelers, Robert Ayers gave a great example of leverage by bull-rushing Pittsburgh left tackle Max Starks back into quarterback Ben Roethlisberger. This example shows clearly what happens when one player gets his pads and arms under those of another, and it didn’t bother me that Big Ben was the final recipient of the outcome. I’m already looking forward to a great rematch in the Sunday Night opener.

At 9:55 of the second quarter, Robert Ayers (91) is playing right DE - they'd flip-flopped Doom and him several times already, and did so again for this down. Ayers is shaded to the outside hip (that just means moved to or directed at) of left tackle Max Starks (78), while the DTs are in the A gaps (1 tech), with the three LBs in a standard triangle behind the DL. The Mike (Joe Mays, 51) is over the center’s head and D.J. Williams (55) fills the B gap left by the outside alignment of Ayers, while Von Miller (58) is set back from the line of scrimmage, over Marcus Gilbert (77). Elvis Dumervil (92) is shaded outside of the inline tight end, Heath Miller (83). The corners are in man, and the safeties are apparently in Cover 2.

Ben Roethlisberger (7) is under center. TE David Johnson (85) is in the offensive left wing position, and running back Isaac Redman (33) is seven yards deep behind the QB. Ayers is crouched low, with his left foot in front and his left hand extending down, just in front of his ankle (not touching the grass): 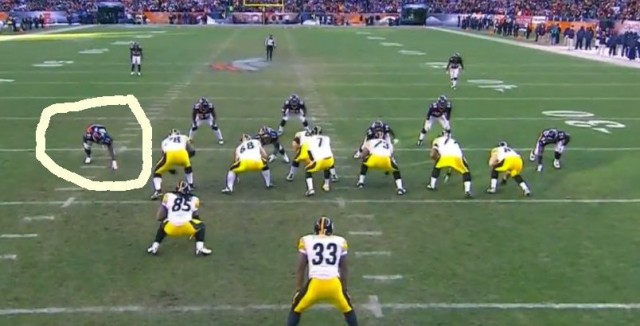 At the snap, Ayers explodes, stepping deep with his right and then his left, and then bringing his right foot up even with his left. He stutter-steps for a beat to get Starks to freeze his feet for a second, flat-footed. The offensive line players should never freeze their feet during the play - they have to be moving from the snap to the whistle. If your feet aren't moving, you're a stationary target and easy to get off-balance. That flat-footed moment is the opening Ayers had deliberately set him up for. You can see in this next screenshot that the right foot of Starks is turned under him slightly and while his hands are in front and close together, his balance is canted slightly to the left. Bad move.

Ayers drives in and lunges forward, staying low and slamming both hands into Starks’s chest. Rather than the forklift approach that Doom usually uses, Ayers uses his double-punch to get Starks moving backwards.  He’s now backpedaling with Ayers's hands driving his upper torso back over Starks's own feet.:

Ayers then bull-rushes Starks to the ground, splitting the backfield blockers as he does so. You can see that Redman couldn’t get around Starks to help out on the right, and David Johnson barely brushes him with a hand from the left:

Ayers follows through by slamming into Roethlisberger for the sack. Doom was arriving from the other side just a quarter-step or so behind and has passed out of the viewer to the left. Being that quarter-step late might have led to a completion with a QB of Roethlisberger’s size and power.

If Starks had used his hands and punched Ayers's inside shoulder, stopping him or just turning his body slightly and getting his hands into Ayers, he could have stepped in and locked Ayers up. The play unfolded too fast for the backfield players to help Starks out - Ayers's technique was too good on this one. As we get to the Broncos' pass blocking in the near future, that’s something that will be covered. If you recall, for pass rushers (and offensive linemen), hand fighting is one of the keys for the defensive linemen whether in pass rush or run defense. It’s just as important for the blockers, whether for run, pass or play-action blocking.

Whether it's pass, run, or play-action blocking, and whether you’re playing offense or defense in the trenches, three keys will remain the same -  explosive first step, hand fighting skills and leverage are still essential to defenders and blockers. You win the battle or you lose it on the same basic issues of technique - stance, balance, and power flow from them.

Who ends up as the low man, and who controls the play with their hands inside the others, will win the battle. The three-inch rule that I talked about in drive blocking can work against the offensive lineman as easily as for him.

It’s also good to notice how little time it took Ayers to confound the left tackle and plant Roethlisberger. If you give an NFL quarterback the time to throw, you’re going to lose on that play almost without exception. When you take the game to them as fast as Denver did on this play, completions are rough to accomplish. That pressure, combined with some of the Steelers' defensive errors, helped the Broncos win their first playoff game since the divisional round of the 2005 playoffs against the Patriots.

The point here is to demonstrate the importance of the leverage battle between the offensive and defensive lines. It’s also worth considering that the only interior lineman to achieve a sack in the 2011 regular season for the Broncos was nickel nose tackle Ryan McBean, who is no longer with the team. When the Broncos can achieve a level of pressure that results in sacks from the interior as well as the edges - which was the purpose of drafting Derek Wolfe, whom Jack Del Rio says will start out playing some of both defensive end and defensive tackle - the team will be substantially more dangerous. Proper leverage can prevent a sack; it can also lead to one.

The 2012 Broncos will be working on both.