Happy Football Monday, friends.  Because I’m a swell guy, I decided to write a quick article about pass coverage relating to tonight’s game between the Broncos and the Falcons.  As we saw last week, the Chiefs got lit up, and I’m going to talk about why that happened, and what the Broncos should (and certainly will) do better.

In Week 1, the Chiefs were without their best CB Brandon Flowers, and their best pass rusher Tamba Hali.  That puts you at a disadvantage against a team with good passing weapons from the jump, especially a team like Atlanta, whose protection weakness at LT went unexploited.  The Chiefs were also seemingly very worried about the Atlanta running game, and they played eight in the box quite a bit.

When you show Cover 1 to the Falcons, they’re going to try to go deep on you.  Their second-year WR Julio Jones is the real deal – he’ll remind you of a taller Terrell Owens, but with good football character.  The veteran on the other side, Roddy White, is also a very good player, but less of a deep threat.  The better choice against a team like Atlanta, if you have to play eight in the box, is to run a three-deep shell.  We’ll get to that shortly.

Ideally, you would not drop the eighth man, and instead be able to handle the run with seven defenders.  I think the Broncos have a solid shot tonight of doing precisely that.  Wesley Woodyard and Joe Mays are at their best against the run, and Von Miller is much improved in that aspect of the game, as Doc noted recently.

The Broncos have been playing a lot of Cover 6 this year, particularly in their three-man-front nickel package, and I don’t think we’ve ever gone over that coverage on this site, since the Broncos are pretty new to playing it.  The Steelers and the 49ers tend to use it a lot, and it’s been historically popular with 30-front teams.

The name of Cover 6 is a bit misleading, because unlike Cover 1, Cover 2, and Cover 3, the '6' does not indicate the number of DBs in the deep shell.  You should begin by thinking of Cover 6 as being a combination of Cover 2 and Cover 3, and remember that two times three equals six.  Here’s a diagram, which I’m going to use to explain the coverage: 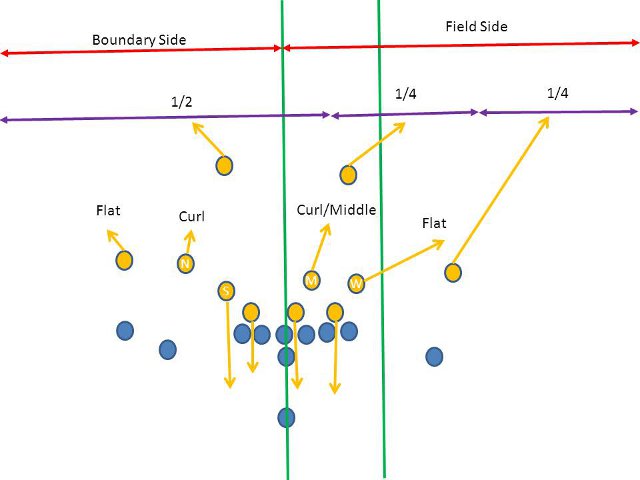 The first thing to understand is that rather than setting the strength of the offense based on open vs closed (meaning the number of personnel to either side of the center), Cover 6 sets it based on the location of the ball vis-à-vis the hashmarks, which are shown in green.  In this diagram, the offense is on the left hashmark.  That makes the offense’s left the boundary side, and the offense’s right the field side.

Rather than having left and right cornerbacks, teams that play a ton of Cover 6 tend to have a boundary corner and a field corner.  The same is true of the safeties.  Note briefly that in this Broncos example, when I say Sam, Mike, and Will, I specifically mean Von Miller, Joe Mays, and Wesley Woodyard, in that order.  In this diagram, I have Miller on the boundary side and Woodyard on the field side, and by conventional thinking, it would be the other way around.

Most of the time, I want Miller rushing the passer, and Woodyard covering the field-side flat, but that can flip. Or, Mays can come as the fourth rusher, or you can drop a DL, and bring two LBs.  This coverage scheme has all the rush flexibility of a base 3-4.

The key thing to understand, though, is what is happening in the secondary.  We have a three-deep shell, but it’s fundamentally different than Cover 3, which breaks the back end into thirds.  Here, on the field side, the field safety and the field corner are playing quarters.  On the boundary side, the boundary safety is playing a deep half, and the boundary corner is playing Cover 2 technique.  That means he’s trying to re-route the WR inside, playing the Flat area, and watching the CB while sinking, if nothing comes to his flat area.

The Broncos have emphasized leaving Mays on the field in nickel downs this year, and while that’s going to be an adventure in coverage sometimes, I find the underlying thinking to be sound. That is, you need a guy in there who can stop the run one-on-one.  I also think that the drafting of Derek Wolfe allows for the use of three-man fronts like this in sub packages.

If the Broncos can handle the run with seven men in the box, I think they’re going to do much better against the pass tonight than Kansas City was able to do.  Expect to see a good mix of Cover 2, Cover 3, and Cover 6, and for the Falcons to be forced to try to beat the Broncos in the seams of the zone, a chunk at a time.