Happy Wednesday, friends.  I’m about to enter a period of personal radio silence, as I hit crunch time in studying for the most extensive and difficult section of the CPA exam, Financial Accounting and Reporting.

Since I’ll mostly be offline for the next week, I wanted to leave y’all a little sump’m sump’m to hold you over.  Once I’m past this part of the test, I’ll be back with some stuff about defensive backs in the draft class, and then kickers and punters.  Then, a few days before the 2013 Draft, I’ll be coming with my fourth annual Rational Actor Mock Draft.

Today, I want to expand upon the article I wrote on Monday, particularly after Greg Cosell’s well-timed piece that was linked in yesterday’s Lard.  I really liked Cosell’s comparison of the emerging need for what I call a matchup safety to how the need emerged (and was gradually filled) for quality slot cornerbacks a decade ago.

The larger question is, what traits are now needed to play safety at a high level in the evolving NFL. There was a time when there was a clear delineation between strong safety and free safety, and the requisite skill sets that each position demanded. Strong safeties, in many ways, were glorified linebackers; bigger, more physical, able to play the run and match up man-to-man on the slower, less athletic tight ends that were then prevalent. Free safeties were better athletes, faster with more range, capable of roaming deep from sideline to sideline. All this derived from an earlier offensive era in which two backs, one tight end and two wide receivers was the league-wide personnel template.

It seems to me, and others may disagree, the safety position has been exceedingly slow to change and adjust as offensive concepts have expanded over time.

I agree with Cosell without reservation on that issue.  He starts to make the point in his article that the Giants made good use of a three-safety base alignment in 2010 and 2011, but he doesn’t fully go as far as making the point that I have, and now will again - that the big nickel grouping, consisting of Deon Grant, Kenny Phillips, and matchup safety Antrel Rolle, was a huge reason that the Giants beat the Patriots in Super Bowl 46.  They could handle the Patriots’ TEs, thus neutralizing New England’s most important advantage.

Cosell makes the point that coaches seem to be looking for interchangeability at safety.  I am not fully with him (or them, if he’s right) on that.  I still like a matched pair of safeties, each of whom has a clear specialty; I just think teams need to re-think what those specialties are.

As I’ve mentioned now in a couple of articles, my strong opinion is that teams would be best-served to forget about the box safety, and to use a matchup safety and a more traditional free safety (which I have decided to call a range safety, since they’re expected to play deep, and range from sideline to sideline).  The best way that I can illustrate my thinking is to show you a few diagrams.  It’s arts and crafts time!  Yay!

Let’s talk about a basic coverage concept, called Man-Free.  It’s also sometimes called Cover 1, and Madden players would know it as that.  In a man-free call, there’s one single-high safety who plays from the deep middle, and who keys the quarterback’s eyes and movement, in diagnosing which side of the field to run to.  Underneath him, you have some other players in man-to-man coverage, typically five of them, to match the five eligible receivers that the offense can use on any play.  If you have four men rushing the passer, and five in man coverage, and one as a single-high safety, that leaves one player who can be used as a free player.

In this diagram, which employs a matchup safety (MS), that free player is the middle linebacker (MB). 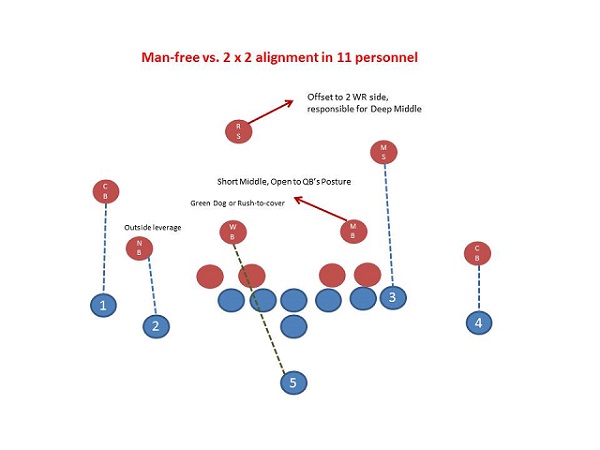 For this purpose, I have the Mike playing the short middle, and opening up to the QB’s posture.  That is, if the QB looks left, the Mike opens up to that same side (the defense’s right).  He’s keying the QB, and making it hard to complete passes in the short middle, which is exactly the same thing that the range safety (RS) is doing in the deep middle.

If the defense had a traditional box safety trying to cover #3, who we can understand as a dangerous TE, that Mike LB would need to probably play underneath that TE, and let the overmatched box safety play over the top of him.  That takes the Mike out of the short middle, and makes it easier for the QB to hit the slot guy, who has a two-way go on the nickelback.  If the nickelback knows he has help from the Mike, he can play outside leverage, and funnel the slot receiver inside to the help.  That takes away the speed-out, and effectively gives the slot guy a one-way go.

You know how I said the MLB was a free player?  Well, you can use him as a blitzer too, if you don’t feel like you need to worry about fortifying the short middle on every play.  The Broncos love to blitz both their LBs from a man-free coverage scheme when they play nickel; they tore up the Browns last December by doing it repeatedly.

Now, one important thing to note is what I have in the diagram for the Will, who is assigned to cover #5, who is a RB.  He has man-coverage responsibility in this iteration of man-free, but he can elect to either green-dog or rush-to-cover.

Green-dogging (for the newer readers) is when a player has man coverage on an eligible receiver, and he sees that his man is staying in to block.  Since he has nobody to cover, he’s free to join the pass rush.  It’s a reactive tactic, based upon a read that the guy isn’t going into the pattern.

Rush-to-cover is a proactive tactic, whereby a player who has man coverage responsibility blitzes with the primary intention of forcing his receiver to stay in and block.  You also hear it called a snatch-blitz sometimes, and it’s almost always done by a LB who is assigned to cover a RB.  The Patriots won their first Super Bowl largely by snatch-blitzing Marshall Faulk, and keeping him out of the pass pattern.

If the Broncos are playing man-free from this nickel look, and they blitz both LBs, one of the LBs is generally going to be rushing-to-cover.  The risk here is that the offense can get the RB out quickly, and run a screen on you.

Back to the diagram, notice how the offense is in a two-by-two alignment.  If we shift the same 11 personnel to a one-by-three alignment, the alignments and assignments on defense change a bit.  To wit: 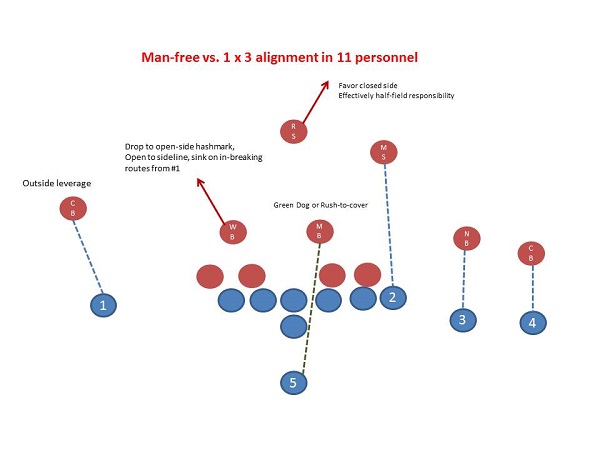 This is what you might do against a team like Tennessee, which likes to play one-by-three, and have their best receiver (Kenny Britt) as the #1 on the backside of the concept.  Our free guy here is the Will LB, and he’s sinking to the open-side hashmark.  His responsibility is to take away in-breaking routes from #1 at the top of his stem, and to keep sinking with him in trail technique if he goes vertical.

The right CB plays outside leverage from an off position on #1, and stays over the top of him.  If the receiver runs vertical, he has deep responsibility on him, with the Will trailing.

The Mike has the RB, and the options that that entails.  The range safety is betting that the concept to the offense’s right is where he’s needed, so he’s favoring that deep half of the field.

If you’re playing against the Saints, for example, you’d set it up more like this.  With them, Jimmy Graham is probably #2, and Marques Colston is #3.  Their most threatening guys are on one side of the field, and you know that one of them wants to work inside. 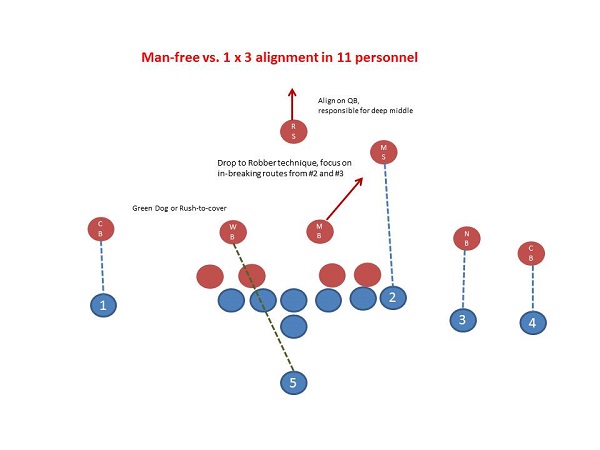 For that reason, we drop the Mike into a Robber technique (which just means he can roam the medium-depth middle), to make it difficult to work the seam or the cross on the concept side.  We’re sending the free guy to the place where the offense presents the most danger.

If you’re playing the Patriots, the danger is that they’ll beat you to death with 12 personnel.  Most defenses can’t cover both Rob Gronkowski and Aaron Hernandez.  We’re assuming that we can handle Gronk pretty well with our shiny new matchup safety.  Peep this diagram: 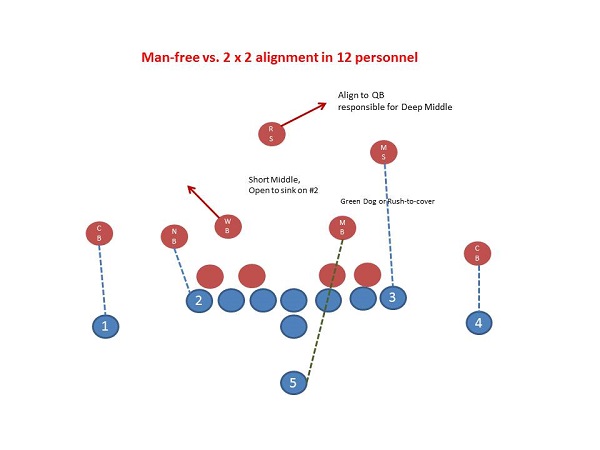 Here, the Broncos would likely use nickel personnel, because Chris Harris is a better man coverage option against a guy like Hernandez (#2) than a linebacker would be.  In this design, I have the Will sinking to sit underneath #2’s vertical stem.  That effectively takes him out of the play.

If the Broncos really want to get better at covering the inside of the field, particularly against tight ends, they should be thinking about getting a good matchup safety.  If one materializes, it opens up the linebackers to do a lot of useful and interesting things, rather than try in vain to run the seam with a tight end who is just too fast for them.