Face-palming my way to brain trauma

I almost never read John Clayton’s articles on ESPN, because they tend to be horrible.  They call him the professor, but really he’s a sniveling little toolbag who doesn’t know anything about football.  He’s basically equivalent to Mark Kiszla, but he got lucky, by getting picked up by ESPN way back when.  Anybody who knows anything scoffs at this dude.

Every year, Clayton writes an article ranking QBs, and I just know it’s going to be a steaming piece of crap, but I read it anyway.  It’s kind of like rubbernecking to see a car accident, knowing that you’re being a jerk and holding up traffic behind you.  (In all likelihood, they’ll rubberneck too.)

Well, I read the annual trainwreck yesterday, and I decided that I should go all Drew Magary on it, and make the perfesser my own personal Mr. Lofty Acela of Beernerdness.  It’s not so much that I feel hostile because Clayton’s writing is awful (though it is); it’s more that his inability to think consistently or intelligently is shocking, no matter how many times I see it.

Here’s the spot where some of you ruminate on how arrogant I am, and how I think I am the biggest brain in the room, because I am about to pick on Clayton.  You know what?  Bite me.

Here begins screenshot magic.  Try not to damage your brain with too many facepalms: 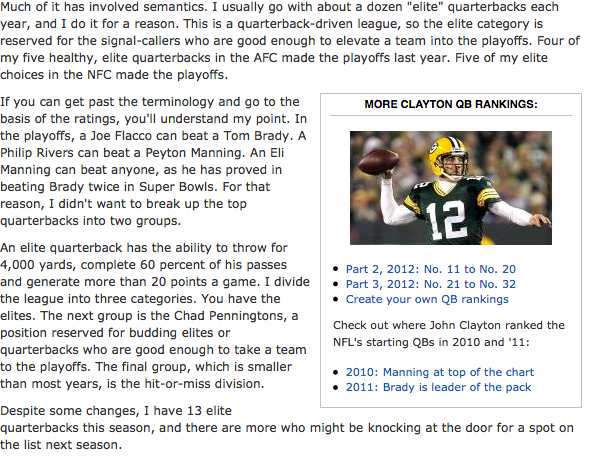 3.  It’s a QB-driven league, which is semi-true, but it’s nonsense in the way that Clayton means it.  He’s suggesting that QBs play games individually against each other, and a team making the playoffs virtually always means its QB is good.  That’s really stupid, and it’s the sort of way somebody who has no clue talks.

4.  Chad Pennington was a budding elite?  There are only three categories, and he’s representative of ~one third of the present NFL?  Huh?

On to the rankings:

Three Super Bowls in a six-year period?  Huh?  Why not more or less?  And the whole thing about easy schedules is for morons, as the Dude has demonstrated.  Bad start, perfesser.

What a jumble of stupid that was.  Brees is willing to accept manufactured pressure that will come from idiots like Clayton.  The bounty nonsense will hurt him, and the schedule is hard, and he might not win more than 10 games.  What does any of this have to do with his ability to play QB?  Nothing.  Absolutely nothing.

The fact that Roethlisberger is 2-1 in Super Bowls and Eli Manning is 2-0 means Ben is better.  Brilliant.  And then there’s the media conjecture that goes way beyond Clayton’s feeble brain that thinks that Ben is going to clash with old Handshake Haley, and that his bearded obstinacy might mess up the Ben.  Why not see how they work before discounting a guy’s ability to play QB?

Winning Super Bowls from the wild-card spot means something, or something.  Eli threw for 4,933 yards, which is 0.17924 feet for every seat at MetLife Stadium.  As we all know, anything over 0.14534 is elite.

The perfesser has been reading Mike Klis apparently, because he’s using 85% as if it’s straight out of the gospel of the homie Jesus.  The rest of this reads like Clayton thinks he knows how to evaluate arm strength in a QB, and that he spotted something amiss in 2010.  He doesn’t.  He didn’t.

Hellllllooooo, Phil.  This whole paragraph from Clayton has nothing to do with Rivers’s ability to play QB.  He’s doing a math equation:

This is going to recur throughout, where a QB’s weapons are going to somehow be a guide to how well he can play QB.  If you want to evaluate 32 QBs fairly, you should level-set them by imagining how each would do with league-average weapons.  Clayton doesn’t try to do that.

More nonsense about the weapons around a QB for Romo, and an exhortation for people to get off his back.  Leave Romo alone!  That dude looks like he could be Clayton in drag.

Clayton is an expert on the quality of Vick’s offseasons, or something.  I love when a guy like JC talks about game film – you know what this is to him?  Something he doesn’t watch. Since he knows the words game film, the fact that other people watch it, and that he gets to write and talk about it makes the knowledge rub off on him by osmosis.  What are hours and hours of game film?  Two hours last week, and three hours the week before?  And what’s this nonsense about being on a mission?  Does that even mean anything?  I think this is the most awful paragraph yet.

Matt Ryan is the kind of average QB with limited upside that a guy like Clayton loves.  He’s almost like a regular guy made good.  The rest of Clayton’s paragraph may as well be gibberish.  Ryan has a style that is best fit by a three-receiver offense?  Really?

Schaub is a player with average ability, much like Ryan.  He has success that is greatly helped by a terrific offensive scheme, and some quality playmakers around him.  He’s the classic example of a non-franchise talent being good enough, and a good enough fit, to possibly win a Super Bowl.

Per John Clayton, it was because of Schaub (who played 10 games) that the Texans won their division.  Nonsense, John.

Wrong again, John.  Stafford has elite ability, and he should be about fourth on this list.  If we’re talking strictly about ability to play QB, that is.

Flacco also has elite ability, is a better athlete than Stafford, and almost as good a natural thrower of the ball.  Clayton has some nonsense about taking ownership.  Figures.

Here comes J-Cutty, sulking all the way, as the leader of the Penningtons.  What is this nonsense about “should return to elite?”  If the guy is elite, he should be called elite.  As a pure talent, Jay is as good as it gets; his personal shortcomings seem like they may always cause him to underachieve a bit, but maybe he finally gets it right.

In other news, have you ever gotten the impression that Clayton hates Josh McDaniels personally?  Stay tuned.

Newton is massively talented, and it will be interesting to see how he’ll do in his second year.  He’s nothing at all like Chad Pennington, though, and never will be.

Look here, Josh.  Clayton giveth, and Clayton taketh away.  And if he giveth back next season, you’ll get to be ninth in the NFC!  Be honored!

I’m going to cut this off here, and run an experiment.  Not enough of y’all are reading IAOFM on Saturdays, and I’m wondering if it’s because you don’t go online on Saturdays, or because we don’t typically write any original content for Saturdays, since we think you won’t see it.  Which came first?  The chicken or the egg?

So, if you are able to do so, check out Part 2 on Saturday afternoon.  If not, catch up on it on Monday.  In either case, have a nice weekend.