Digesting the inside zone runs of the Raiders

Against the Pittsburgh Steelers, the Raiders were already down an early touchdown when Darren McFadden took a simple zone-blocking play and ran it 65 yards into the end zone. It’s basic ZB technique, and the Broncos will need to make sure that they’re disciplined in their gaps and able to both fight through the line’s blocks and to make sure that the safety has upfield containment to combat it.

Pittsburgh failed on both aspects, and the result will always be the same, no matter who’s running this basic play. Denver uses it, and so do many teams around the league. It’s also part of how Arian Foster has been burning the league for three seasons.

Here’s the basic lineup: Pittsburgh is in their classic, Okie-based odd-front defense. They’ve got three down linemen and two OLBs, spread wide this time. The ILBs are in their standard, base positioning. The Raiders are in 11 personnel and face 1st and 10 at their own 35. Their formation pulls one safety off into coverage, leaving only Ryan Mundy to handle the deep middle. 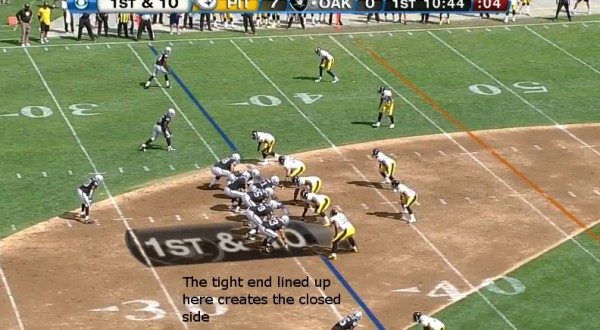 Next is the view from behind the offense. It’s the same formation because it’s the same play, but you can see where Mundy is, or at least where his legs are. Cooper Carlisle (66), the former Bronco, is going to make the whole play work, so I marked him. McFadden (20) is speedy, but without Carlisle’s technique, this play is going nowhere fast. 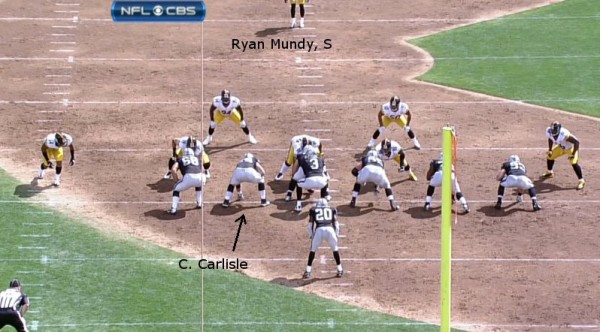 By showing a three-wide formation and drawing the safety off into coverage, the formation creates an advantage for the offense. Here’s how they use it: the ball is snapped and the offensive line fires out to the closed side, where the TE is. The open side OLB is suddenly out of position unless he can either run behind the line of scrimmage and catch McFadden from behind - which is unlikely, given McFadden’s speed - or somehow make it to the runner by charging along the defensive side of the LOS. 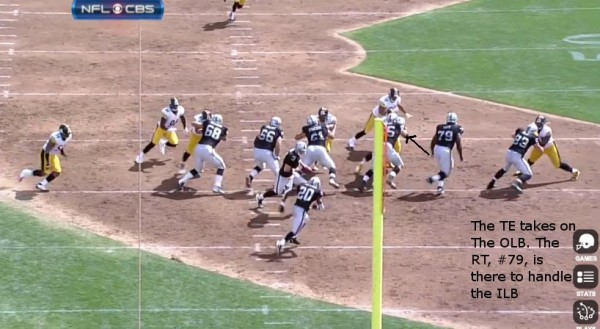 Now, look at what Carlisle has done. By wheeling his body so he’s facing away from the runner and working in conjunction with the left tackle, he’s created a blockade that takes three defenders - labeled as 1, 2 and 3 - out of the play. The combination of that technique and the continued movement of the rest of the line toward the closed side creates a huge hole between the center and Carlisle. although you can see that his feet are beginning to run to shut down the play, Mundy is still at the top, and that’s about to be a problem. 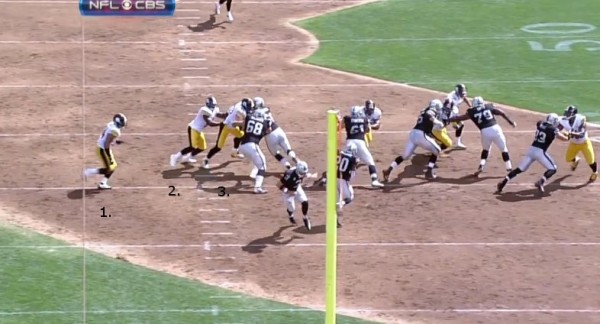 Openings, the gaps to run through, usually open and close in a heartbeat when you’re working with a zone blocking scheme. You can also see why they call this a one-cut approach - there’s a gap there if McFadden cuts back against the flow of the blocking. This time, Darren has a lot of time to cut back and into his gap.

Defending this play is straightforward, and there are a few options. The nose guard (98, Casey Hampton) has to be able to shed the center to stop the play from unfolding. If you look, Stefen Wisniewski (61) has his head on the side of the NG that the runner’s coming through. That, his body position, and the fact that he gets his hands into the NG first, lets him control Hampton long enough for McFadden to drive through the gap. It’s between McFadden and Mundy, now.

Another option would have been for the inside defender on the left of the image (94, Lawrence Timmons) to have stayed back. Instead, he chooses a lane that congests quickly: he comes forward enough to get cut off from the run as the RDE (99, Brett Keisel) is powered back by the blocking of Carlisle and the left tackle, Jared Veldheer (68). The play unfolds very quickly - it’s easy to misdiagnose the gap it’s coming through. 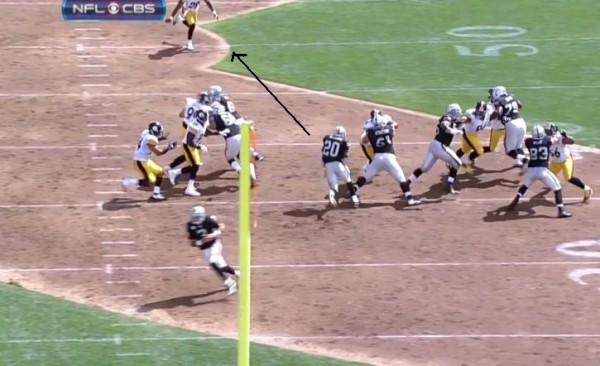 That’s an advantage for McFadden, who’s very elusive in the open field. Look at the lean he’s able to use to keep away from Mundy’s hands. That’s the kind of lean at high speed that makes Von Miller so effective off the edge. Mundy takes his best shot, but McFadden is quickly past him and sprinting for the end zone. 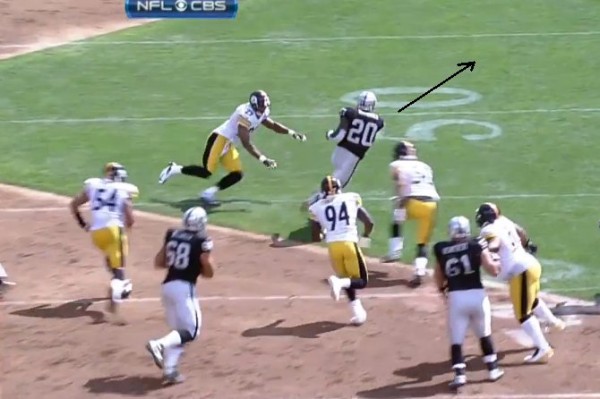 It’s as simple as that. Against an even-front defense like Denver’s, the play is still blocked in essentially the same way; you still have seven guys in the box and three defenders out taking on receivers, with a free safety in back. On offense, you still have to wall off the gap between the center and the guard.

The Raiders are very effective in running this play. It’s the kind of basic inside zone run that many teams around the league use. If your defensive linemen can’t shed their blockers, or your linebackers come up too quickly, miss their gaps, and/or get caught in traffic (or ‘trash’, as coaches often call it), it’s off to the races for the RB. If the free safety can’t make the tackle in space, that run’s going to be worth six points.

Denver likes to play what’s called an over formation, placing three defensive linemen on the closed/strong side of the formation. When they do, the play can be run to the offense’s left or right with much the same result. As long as the offense is forming a wall between the center and the guard, it works running it to either side. Variations of this can be run through multiple gaps, inside (by the center) or outside.

I hope this helps you to understand what the zone-blocking scheme is set up to do on an inside run and what the defense has to accomplish to defeat the play. If your nose guard/tackle can shed the center, or your off tackle can break free of the guard, you’re in good shape.

If not, that’s why you need a free safety who can tackle.