Happy Friday, friends. Rather than doing a Digesting article about the Eagles today, I decided to look at the big question: is their offense a fad, or does it have staying power? Nothing gets football talkers more riled up than speculating on whether new tactics can work over the long haul in the NFL.

Most of them are of the default belief that nothing new can ever work. I’m sure that, in their early days, that was said about innovations like the 3-4 defense, or the zone-blitz, or the shotgun. The reality is that some new stuff works, and some of it is relegated to the dustbin of history.

And then you have something like the Run and Shoot, that worked well for a while, and then ostensibly faded away, but quietly, its principles are still quite common to this day.

Today, I’m going to explain why the Chip Kelly design works, and why it will continue to work in the NFL on an ongoing basis. Hit the jump, and we’ll get to the bottom of this.

So, there’s a thing called the “zone read-option” that some people are saying isn’t a thing anymore. Defenses figured out how to stop it! ZOMG! Why, just today, Pro Football Talk (talking about football isn't knowing about football) ran a story declaring it dead.

It’s easy to look at what Philadelphia is doing, and say that it’s the same thing that Washington or Seattle did last year. It’s not, though. That was about creating discipline conflicts in run defense, much like the Broncos did under the Shanahan regime, and the Texans do under Gary Kubiak. If you force a defense to be disciplined and stay at home in all eight gaps, it’s easier to win in the one gap in which you’re actually trying to run.

When Robert Griffin reads a DE at the mesh point, he can either hand the ball off to his RB going one way, or keep the ball and run at the gap that a crashing DE just vacated. There are two options there off the action, and a defense that sells out to fill all eight gaps can have some luck with slowing down those two options.

What if there were more than two options, though? What if there were five? Would a defense be able to cover them all? That’s the question that Chip Kelly is asking, and answering generally, no, you can’t stop everything.

Take a look at this diagram: 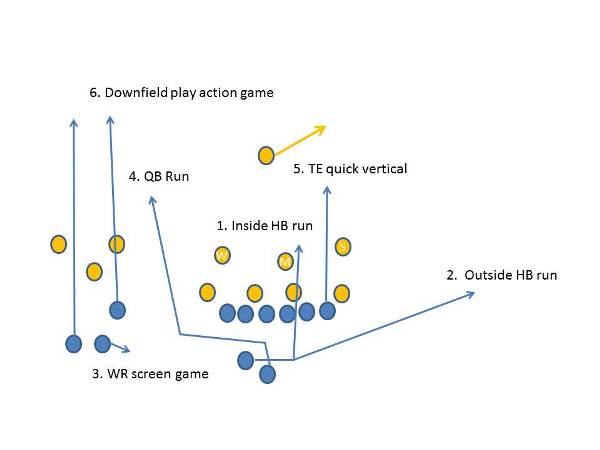 These are the options that Michael Vick can have off of one look, and one initial run action:

There’s also a sixth option, that does need to be called pre-snap, as a counter to the other five options:

6. Vick throws the ball downfield off of play actions. The offensive line has to pass-block here, which is why everybody has to be on the same page.

How does a defense guard against all six options? If you look at the numbered options in the diagram, you can see the challenge; the defense is stretched both vertically and horizontally. How can you defend every inch of the field?

We’ll get to that, but before we do, I want to make sure everybody knows a few things:

The Chip Kelly offense goes beyond the simple zone-read stuff, because it creates run-pass conflicts for defenses. All but the very best ones are going to have to try to guess right, snap after snap, and that makes them vulnerable.

Here’s what you have to do to stop each of the six options:

That’s pretty difficult, right? The Chiefs did a pretty good job of checking all six boxes at times in their win last Thursday, and they still gave up 465 yards of offense, including 264 on the ground. How will the Broncos fare? It will probably be a mixed bag, but here are some thoughts:

That’s what I’ve got, friends. It will be tough to stop the Eagles offense, but I think the terrible Eagles defense will have twice as big a challenge with the Broncos offense.